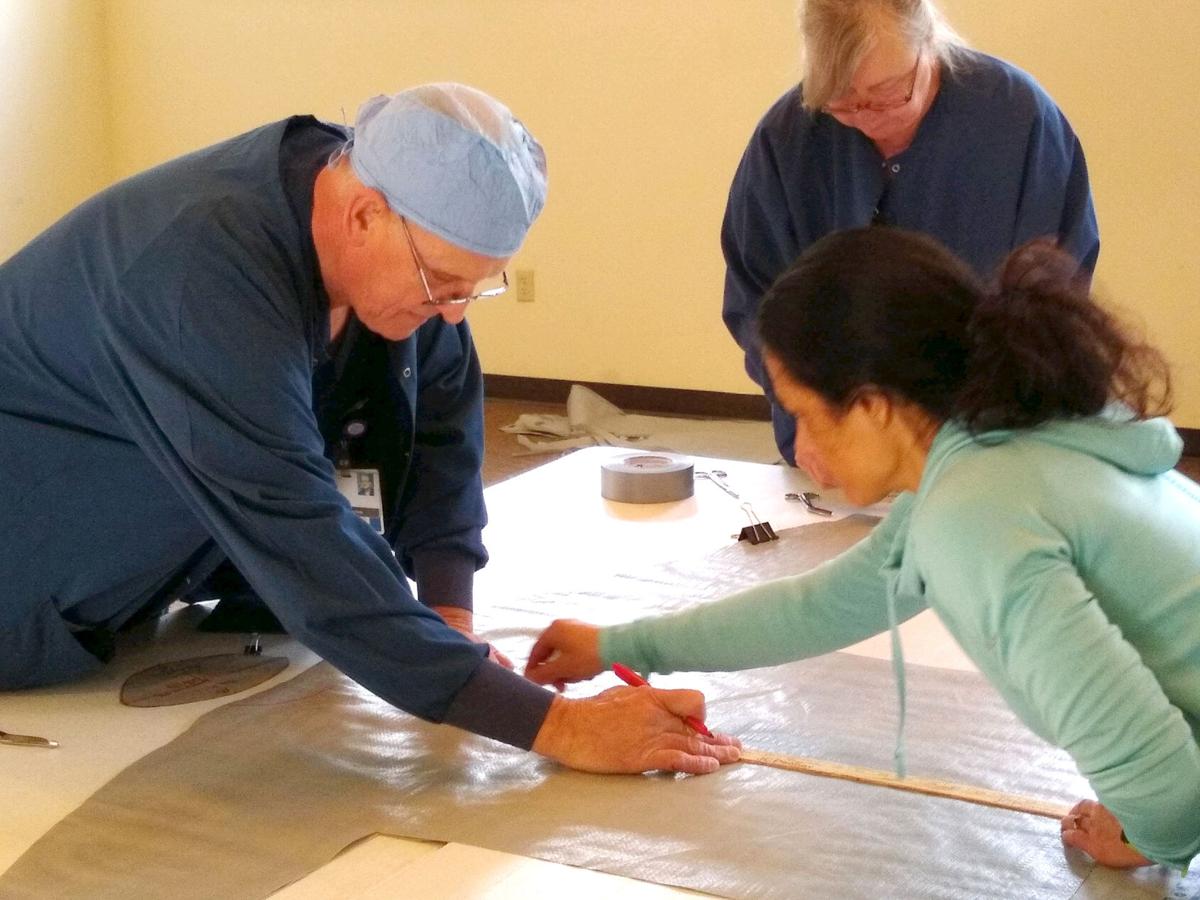 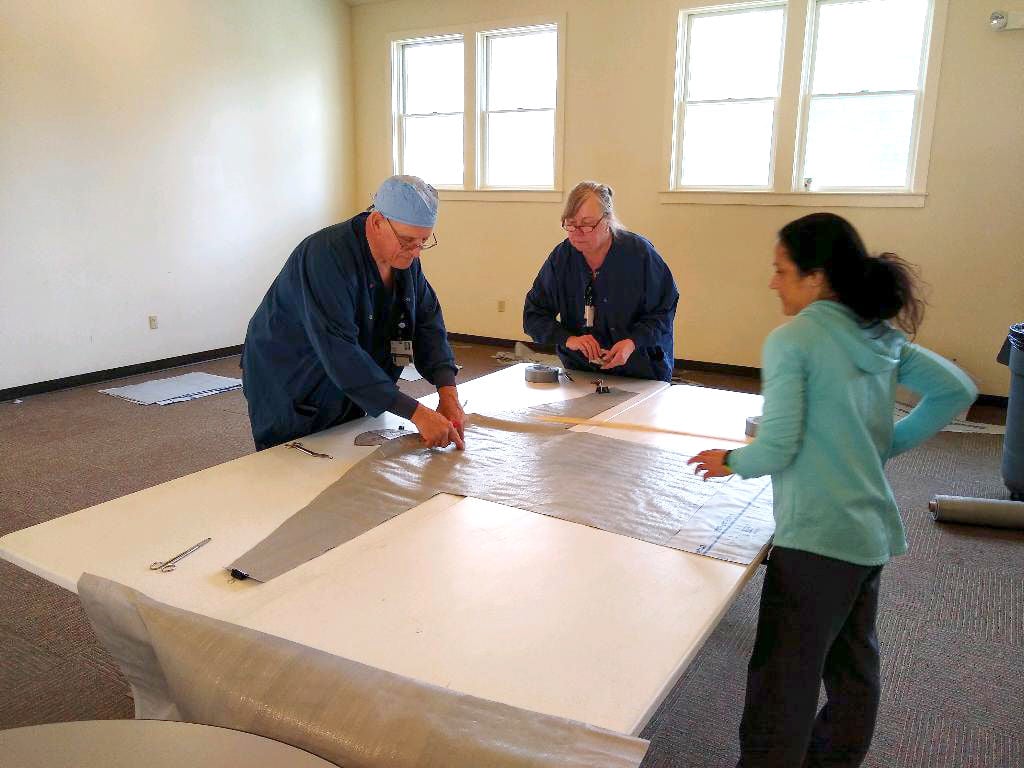 Surgical staff at Memorial Hospital (from left) Michael Kapinos, RNFA; Meg Gospodarek, CSTFA; and Gail Gordon, RN; work on making gowns out of Tyvek and duct tape based on a design by Ethan Lemieux. (COURTESY PHOTO) 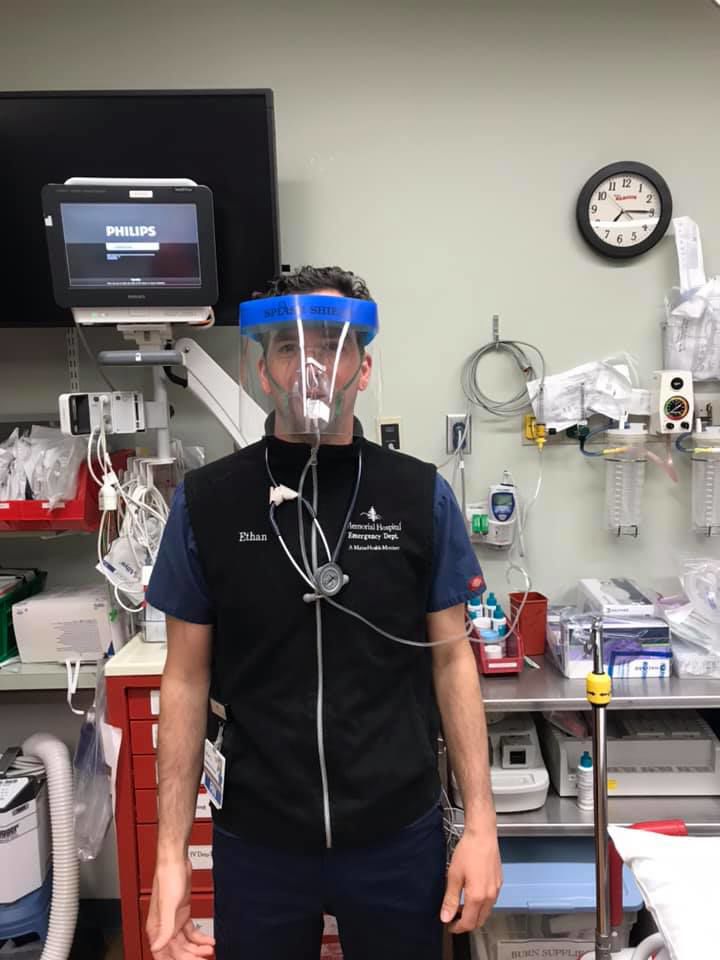 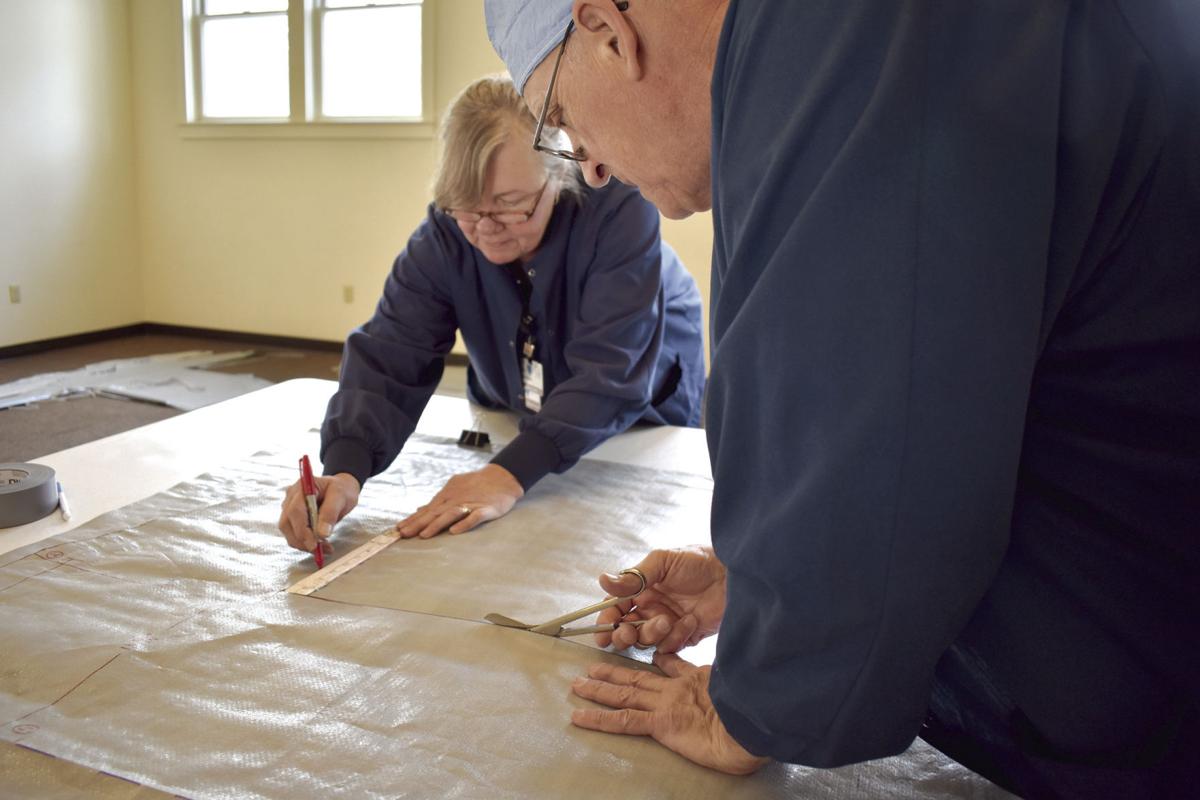 Members of the Memorial Hospital surigical team (from left) Meg Gospodarek, CSTFA, and Michael Kapinos, RNFA work on making gowns out of Tyvek house wrap and duct tape based on a design created by Ethan Lemieux, an emergency room nurse at the hospital.

Surgical staff at Memorial Hospital (from left) Michael Kapinos, RNFA; Meg Gospodarek, CSTFA; and Gail Gordon, RN; work on making gowns out of Tyvek and duct tape based on a design by Ethan Lemieux. (COURTESY PHOTO)

Members of the Memorial Hospital surigical team (from left) Meg Gospodarek, CSTFA, and Michael Kapinos, RNFA work on making gowns out of Tyvek house wrap and duct tape based on a design created by Ethan Lemieux, an emergency room nurse at the hospital.

CONWAY — Among efforts at Memorial Hospital to prepare for a surge in COVID-19 patients, the staff has been assessing its stock of personal protective equipment and trying to find ways to augmente it.

When a doctor, nurse or EMT interacts with someone who has a dangerous infectious disease like COVID-19, they wear gowns, gloves, face masks and other equipment. Some of that PPE — personal protective equipment — can be washed and reused. Other pieces can only be used once.

While hospital officials said last week the hospital currently has enough equipment for the patients being seen, they can always use more PPE, as well as patient beds and negative pressure rooms.

“We’re learning lessons from other areas of the country as their patient surges happen and the effect it has on their supplies,” said Memorial President Art Mathisen.

Some people have offered to make and donate supplies to the hospital.

Mathisen said at a hospital meeting last week that the administration is willing to talk to people about specific ideas, "and if you want to put together a proof or a prototype for us to look at, we’re open to that and other medical supplies."

Asked if the hospital would use such supplies if they were donated, Mathisen replied: "My answer is, I hope not. But we’re preparing for the worst-case scenario and if we run out of the normal supply of our masks, then we’re going to use the masks that are given to us by our community members.

"We want the community involved. We will take input, we will talk with you about what you’re thinking about for supplies and material," Mathisen said.

He added, "Right now, we’re doing quite well thanks to our parent organization, MaineHealth, and their efforts in keeping the system covered across the board with appropriate PPE."

But replacing that equipment could become difficult and expensive down the road.

So last week, Ethan Lemieux, an ER nurse at Memorial, came up with the idea of creating gowns out of Tyvek house wrap and duct tape.

“That’s all it is,” Lemieux said of the design that could be used to replace their stock of gowns that can only be worn once.

Lemieux said the idea popped into his head last Monday, and he discussed it with Matt Dunn, chief medical officer.

Lemieux said he knocked out the prototype in about 20 minutes and presented it to the “Code White” Team last Tuesday.

The design matches standard gowns currently in use; it’s only the materials that are different, he said.

Mathisen said Lemieux’s design “fits well, and the material is appropriate since liquids fall right off. These gowns will certainly help us prepare for the patient surge we believe is coming."

Mathisen noted that the gowns will be held in readiness and used if standard PPE is not available.

Last Wednesday, after getting the green light, Lemieux got together a group of medical/surgical department staffers, who are less busy now that non-essential surgeries have been postponed, to start making the gowns.

They worked in two groups. By Thursday afternoon, they had made 28 gowns.

As of Monday, the work was handed off to a group of volunteers working at the Adult Day Center, which has been shut down for the emergency.

Lowe’s and Home Depot quickly got on board, donating supplies, and Lemieux got an engineer at HEB Engineering to create a CAD drawing of the template, which he said anybody who has a printer big enough for blueprints can print off and use as a pattern.

The gowns are cheap and easy to make. More durable than the standard disposable gown, they are also easy to clean and reuse.

“If they get ripped, you just take a piece of duct tape and duct tape over it,” Lemieux said.

He said the gowns work as well or better than the standard gown, which is relatively fragile — leaning against a wet car can destroy its ability to keep out pathogens.

Lemieux also posted on Facebook a simple way to make a reusable powered, air-purifying respirator or PAPR out of oxygen equipment hall hospitals have.

“It’s repurposing some already standard hospital equipment used to oxygenate a patient. We’re using it to protect us.”

He said there isn’t really any modification other than tape.

Lemieux has videotaped instructions for making the gowns and posted them along with photos on his Facebook page (tinyurl.com/yxywnb5l). He said people can message him for a pdf of the template.

Lemieux said is sharing the templates with other hospitals within and outside the MaineHealth system. He has sent the template to Huggins Hospital in Wolfeboro, where they are also making the gowns.