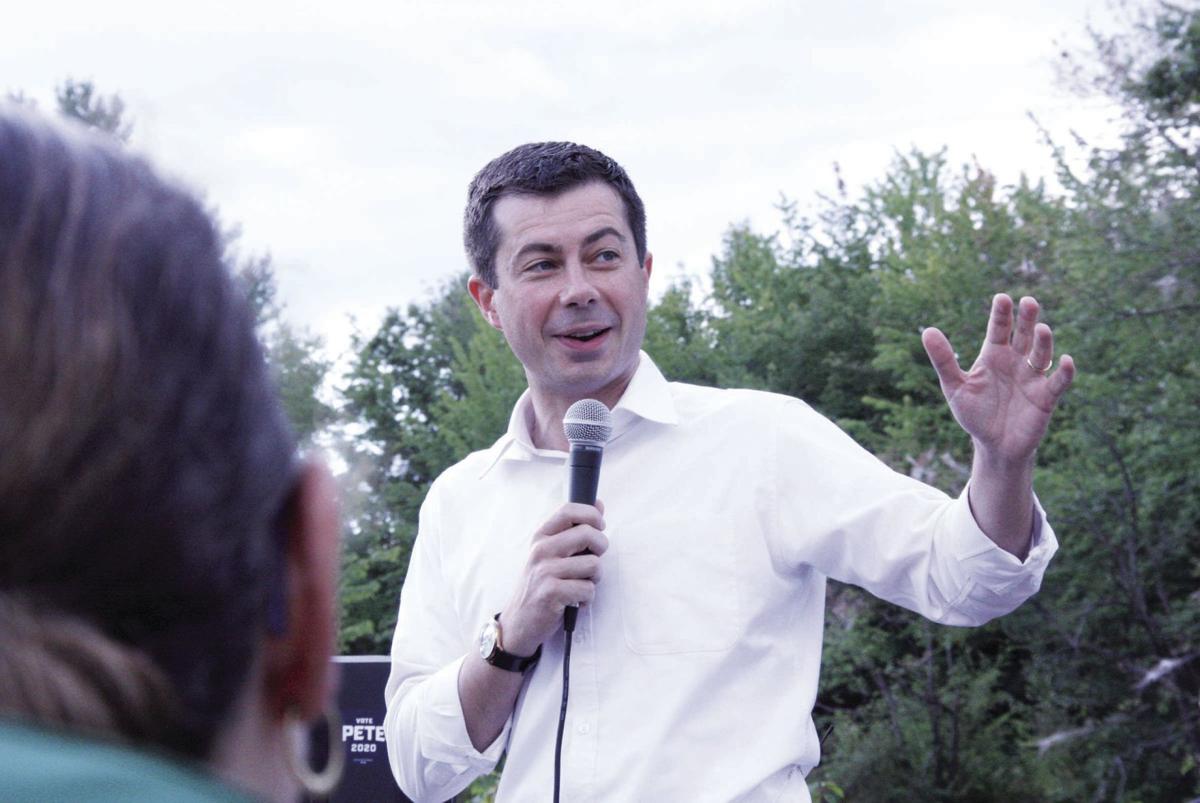 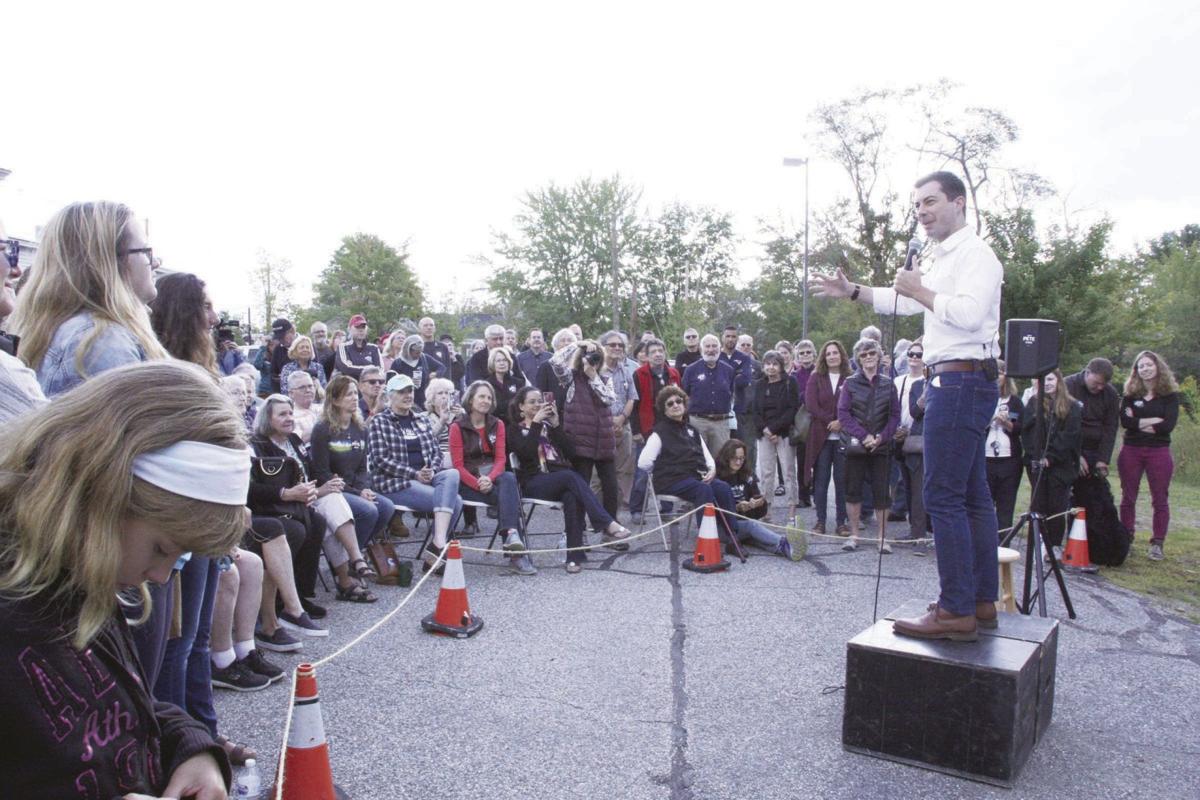 Presidential candidate Pete Buttigieg, a Democrat from Indiana, speaks in front of a large crowd of people in the parking lot behind the new Conway campaign office he opened at 73 Main St. on Sunday morning. (TERRY LEAVITT PHOTO) 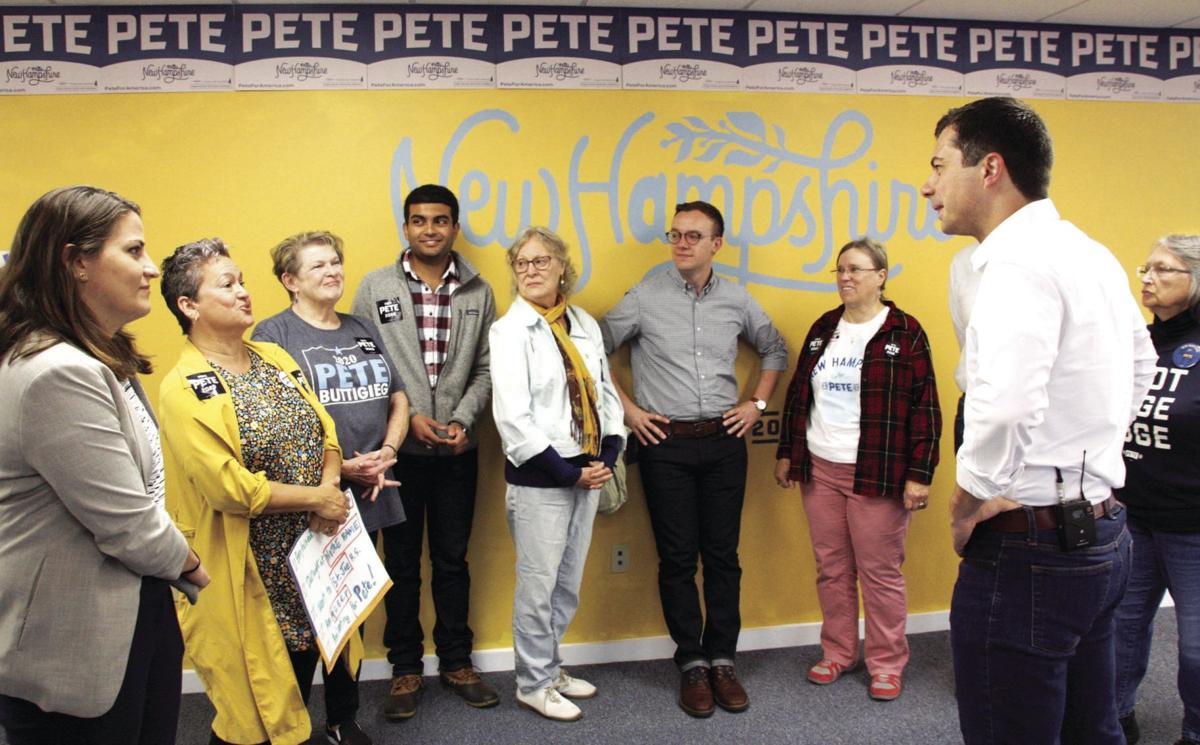 Presidential candidate Pete Buttigieg, a Democrat from Indiana, speaks in front of a large crowd of people in the parking lot behind the new Conway campaign office he opened at 73 Main St. on Sunday morning. (TERRY LEAVITT PHOTO)

Buttigieg, 37, graduated from Harvard University and Pembroke College, in Oxford, England. He served as an intelligence officer in the Navy Reserve in Afghanistan, worked as a policy consultant and is mayor of South Bend, Ind.

About 150 people showed up at 7:30 a.m. to 73 Main St. in Conway to greet Buttigieg. Another 100 people were seen in Berlin later in the morning to help open the office there.

After an introduction by state Rep. Harrison Kanzler (D-Conway), Buttigieg spoke to the assembled crowd in Conway, saying the country needs big, bold ideas in order to make Americans’ lives more prosperous and more secure. “What is big and bold doesn’t always have to be what’s most divisive,” he said.

“Let’s guide our friends into the right kinds of conversations about what kind of country that this might be, because as bleak as the moment is, as tough as things are, as hard as our politics have become, I also come to this with a great deal of hope and I know that you do, too because I see it in the faces of people that I talk to,” Buttigieg said.

The crowd responded with shouts and applause when he asked: “Are you ready to call our fellow Americans to a higher level of ambition about what’s possible in our democracy?”

In an interview following the event, Buttigieg talked about his plan for rural America, and how it can help communities like Berlin that have lost much of their industry. Buttigieg, who grew up in South Bend, and has been mayor since 2012, said he is optimistic that onetime manufacturing centers like Berlin can be revitalized. “I’ve seen it. The community that I live in — a little bit bigger, but also a place that really took it on the chin with de-industrialization — it’s been 50 years trying to overcome,” he said. “We lost a quarter of our population.”

Returning to South Bend after moving away, Buttigieg said he realized the economy there could be improved. “I realized we could do something about it,” he said, adding that would take regional cooperation, federal support and access to technology, not to mention education. “So we’re going to need to create incentives for quality teachers to be able to remain in rural communities.” He also said improving broadband is key to revitalizing rural America, noting his campaign has a plan to “auction parts of our our (broadband) spectrum in order to raise, we think, $40 billion — which we estimate is half of the $80 billion that will be required.”

“One of the reasons that’s so important is because our economic vision includes innovation hubs that make it possible for some of these jobs you can do from anywhere to be done in rural areas,” he added.

Talking again about the success South Bend has had in revitalizing its economy, he said: “The president is making promises — Make America Great Again — but great is not about again. There’s no again in the real world; it’s how we make sure the future is better, and that’s what our vision for rural American is about.”

Some in the crowd said they were ready to throw their support behind Buttigieg; others said they liked him but had not made a decision about whom to vote for. Jen Bella of Denmark, Maine, is volunteering in the Conway office. Like Buttigieg, she is a native of South Bend and said she decided to work for his campaign after seeing how that city’s economy has made a comeback in recent years. “I’ve never felt this excited about a candidate,” she said.

Buttigieg has opened offices in every county in New Hampshire. On Saturday, he appeared at campaign office openings in Portsmouth and Somersworth and over the past week, he has also opened offices in Manchester, Concord, Lacnoia, Lebanon, Claremont, Keene, Derry and Nashua.