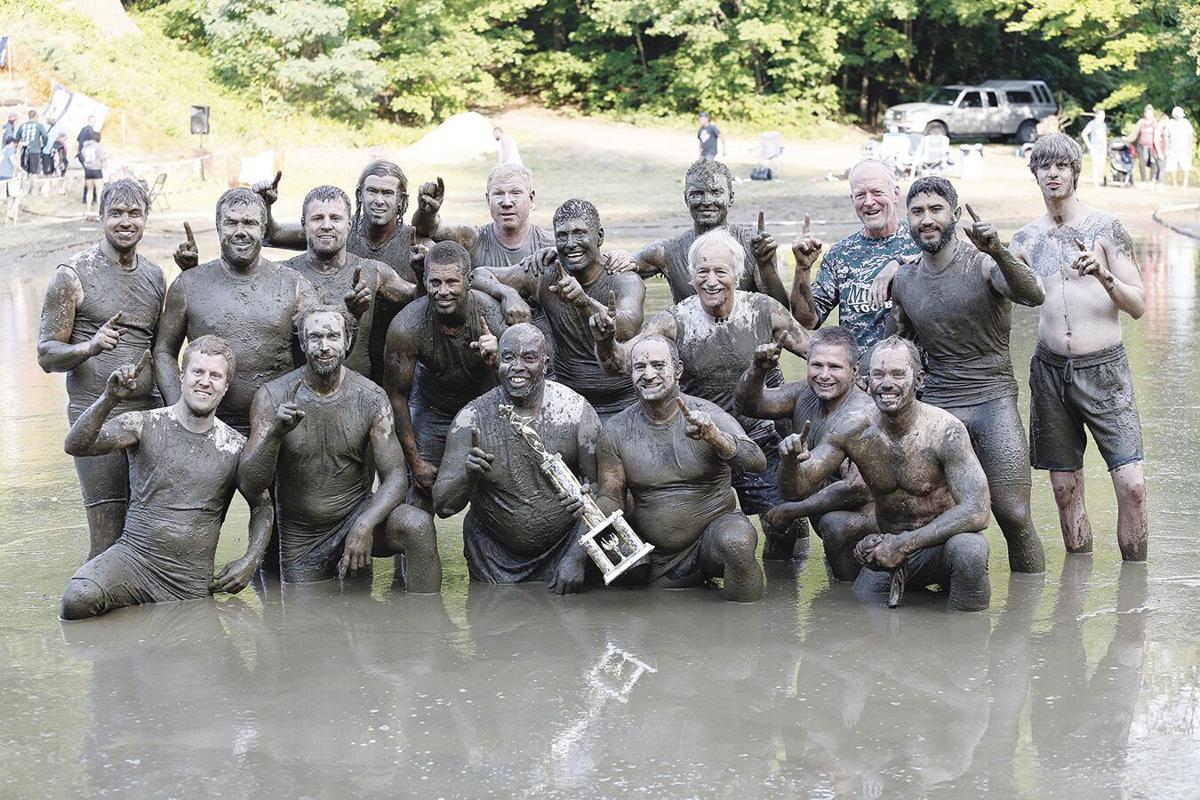 The Muddas Football Club of Amherst poses for a group photo after winning the championship game at the North Conway's Hog Coliseum for the last day of Mud Bowl 2021 on Sunday afternoon. They beat the Crocs 28-20. (RACHEL SHARPLES PHOTO) 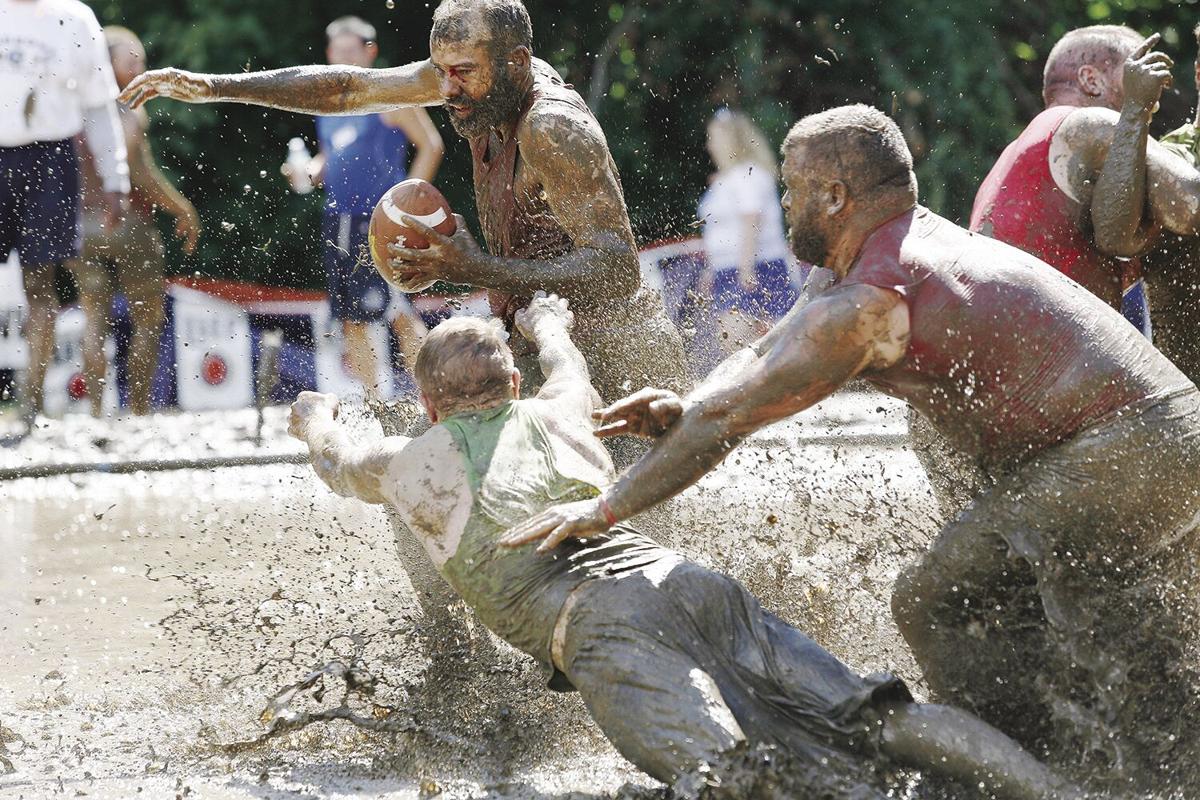 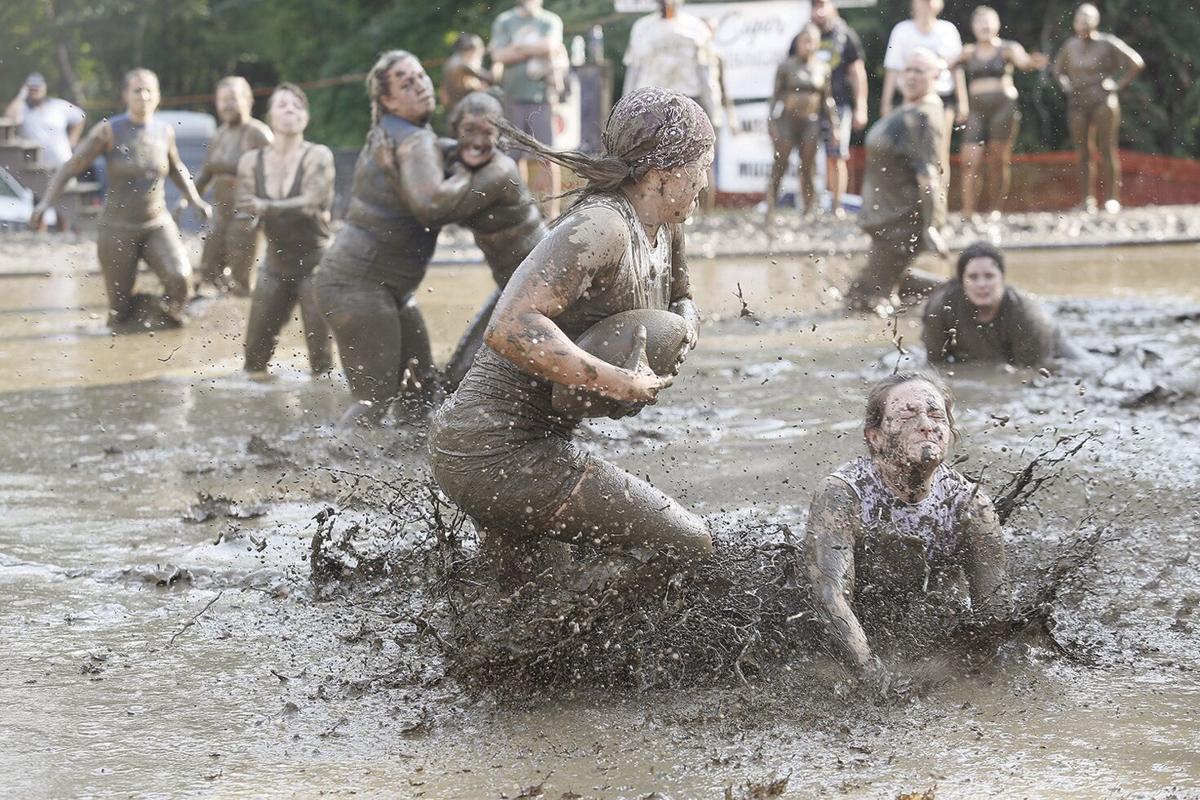 The Muddas Football Club of Amherst poses for a group photo after winning the championship game at the North Conway's Hog Coliseum for the last day of Mud Bowl 2021 on Sunday afternoon. They beat the Crocs 28-20. (RACHEL SHARPLES PHOTO)

CONWAY — After a year’s hiatus caused by the pandemic, there were some changes at Mud Bowl this year — but the outcome was the same: Namely, the Muddas Football Club of Amherst again won the championship, for the 22nd time and their third straight!

The Muddas started out on Friday with a 28-6 defeat of the 2001 champion New Hampshire Mudcats 28-6 and a 14-12 win over the Cumberland, R.I., Muckaneers and advanced to play Sunday when they defeated the hometown 11-time champion MWV Hogs, 22-12.

The Crocs compiled a record of 4-0 before their loss to the Muddas in the finals, with the Crocs beating the Carrabassett Valley Rats (founders of mud football in 1972) 28-0 Friday; the Mud Ducks of Rowley, Mass., 36-6 Saturday; and eliminating the Ducks 22-0 and the Muckaneers 14-8 on Sunday.

“It was a great tourney and it was good to be back,” said Crocs quarterback Veno after time ran out for their bid for a third title (they snagged their first against the Nashua Mud Gumbys in 2013 and their second in 2017 by defeating the Muddas in OT, 14-12).

The other two Mud Bowl Jasons in the finals — the Muddas' Jason Holder, "Dr. J" the senior, and his son, Dr. J the QB, also a Hall of Famer — praised the community for hosting the tourney after the year layoff.

“It’s a great event, and we love coming here every year to celebrate that spirit,” said Dr. J the senior.

“There were a lot of good teams vying this year. We’re happy to add another win as the competition was tough,” said Dr. J the QB.

The Muddas scored on their first possession, with Holder hitting Dan Woodworth and adding a 2-point conversion to Jaime Sawler to go ahead 8-0. They added to the lead, 14-0, on a long bomb from Holder to Pat Connolly.

The Crocs got on the board with a toss from Veno to Ryan Martin to make it 14-6 with 57 seconds left in the first half.

On the first possession in the second half, Veno connected with Brandon Hamilton to close the gap to 14-12, but the Muddas jumped ahead to make it 20-12 with 6 minutes left to play, scoring on another pass from Holder to Connolly.

Things got exciting when Veno connected on a TD pass to Dustin Simpson-Bragg to close it to 20-18, then tied it on the extra point conversion to Scott Butters at 20-20 with just 2 minutes to go. Then Holder on the next series connected on a double pass to Connolly, who threw to Holder’s brother Ryan to make it 26-20. Holder connected with Sawler on the 2-point conversion to make it 28-20.

On their final drive, the Crocs valiantly tried to score and head into OT but were foiled by the Muddas’ staunch defense. The Muddas took over with 7 seconds left, and Holder ran out the clock to put it into the record books, as announcer Jon “Voice of Mud Bowl” Belkin put it.

“I thought when we tied them at 20 we had a great shot to win the game. The Muddas are a great team and both teams battled to the end,” said Veno.

The 11-time champion MWV Hogs led by QB Tommy Wagner, Tom Vestal and Dan Spofford went 1-2 in the tourney, losing 20-14 to the North Shore Mudsharks on Friday, then beating the Peabody Predators, 36-0, Saturday before being eliminated by the Muddas Sunday.

The Mud Things, the third local team, and formed by 2021 Mud Bowl Hall of Fame inductee Blair Lynch four years ago, also went 1-and-2, losing their first game Friday 18-12 to the Mud Ducks; beating the Rats 8-0; Saturday before being ousted Sunday 20-6 by the Muckaneers.

The eight-time champion Nashua Mud Gumbys led by Don and Maxx Chambers were 3-and-1; the Muckaneers and Mud Ducks, 2-and-2; the Mudsharks, 1-and-two; the Mudcats, the Rats, the Predators, and the Mud Dogs, all 0-and-two.

In the women’s mud tournament, the MudMaids led by Sarah Baker defeated the female Mud Dogs, 24-6 on Saturday and 22-0 on Sunday

With concerns for the pandemic, organizers had set up signs and hand sanitizers and most volunteers wore masks at the ticket booth and in the food tents and vendor booths. Attendees were encouraged to wear masks and to follow CDC social distancing guidelines: volunteers wore masks, but few fans did, according to officials.

Attendance on Saturday was strong and said to be the best in years and although lighter on Sunday, it was also better than recent years. Friday is always the lightest day. Final figures are not yet available.

“It seemed that we saw a lot of young families and that was nice to see. I think people were happy to be outdoors and having fun. We had more kids’ games at the top of the field — we have been looking to make the event more family friendly in recent years and I think attendance reflected that,” said Heather Ouellette, executive director of Vaughan Learning Services, one of Mud Bowl’s primary beneficiaries along with the North Conway Community Center and Carroll County Retired Senior Volunteer Program. Over the past 45 years, nearly $1 million has been raised for nonprofit organizations.

For more, go to mud-bowl.org.