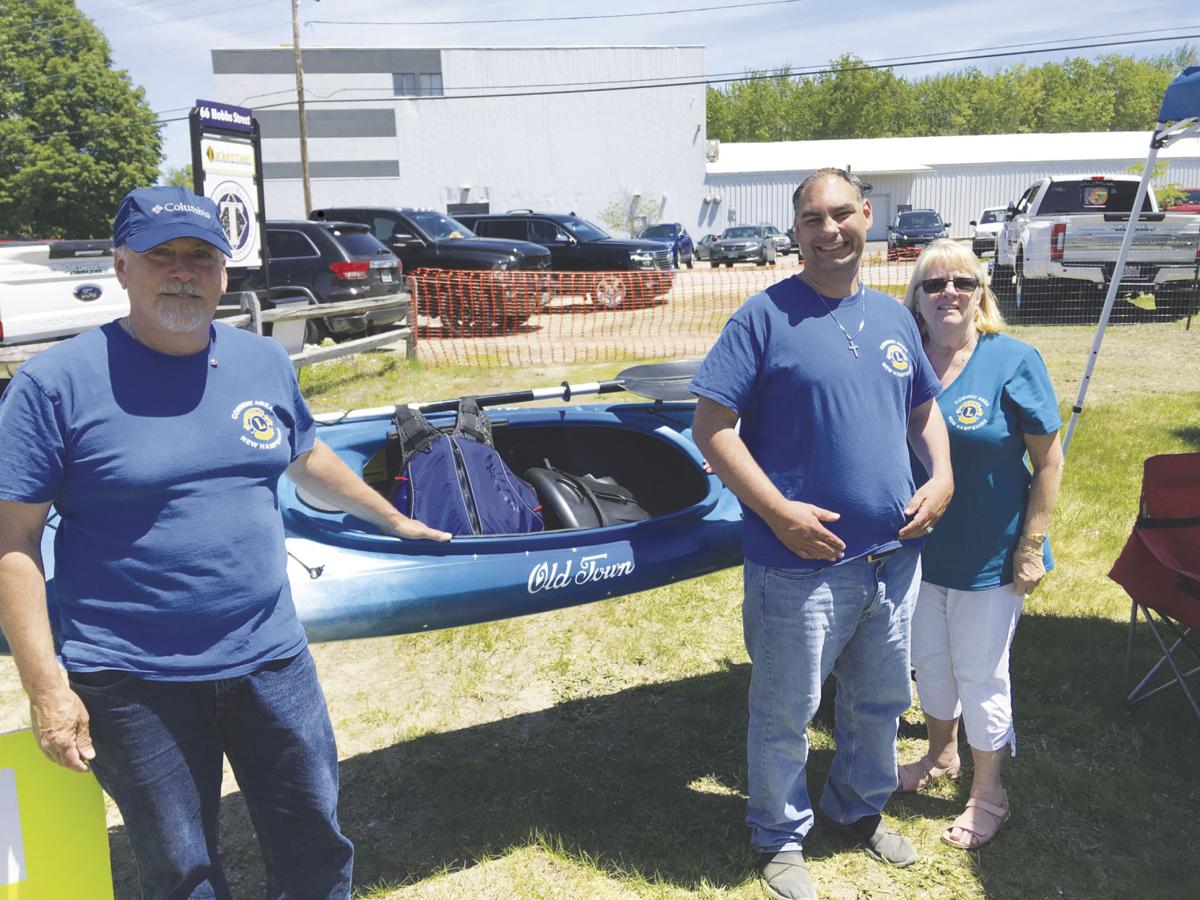 For the third year, the Conway Area Lions Club is selling raffle tickets for the chance to win a 12-foot Old Town Dirigo 120 kayak. Shown at last Saturday's Lumberjack Festival selling tickets were (from left) Rick Lammey, Andy Wilder and Janet Lottmann. Tickets are $5 each or five for $20. The drawing will be held in front of Badger Realty in North Conway Sept. 7. Proceeds benefit the Miranda Center for Diabetes. Go to conwayarealions.org to buy tickets. (TOM EASTMAN PHOTO) 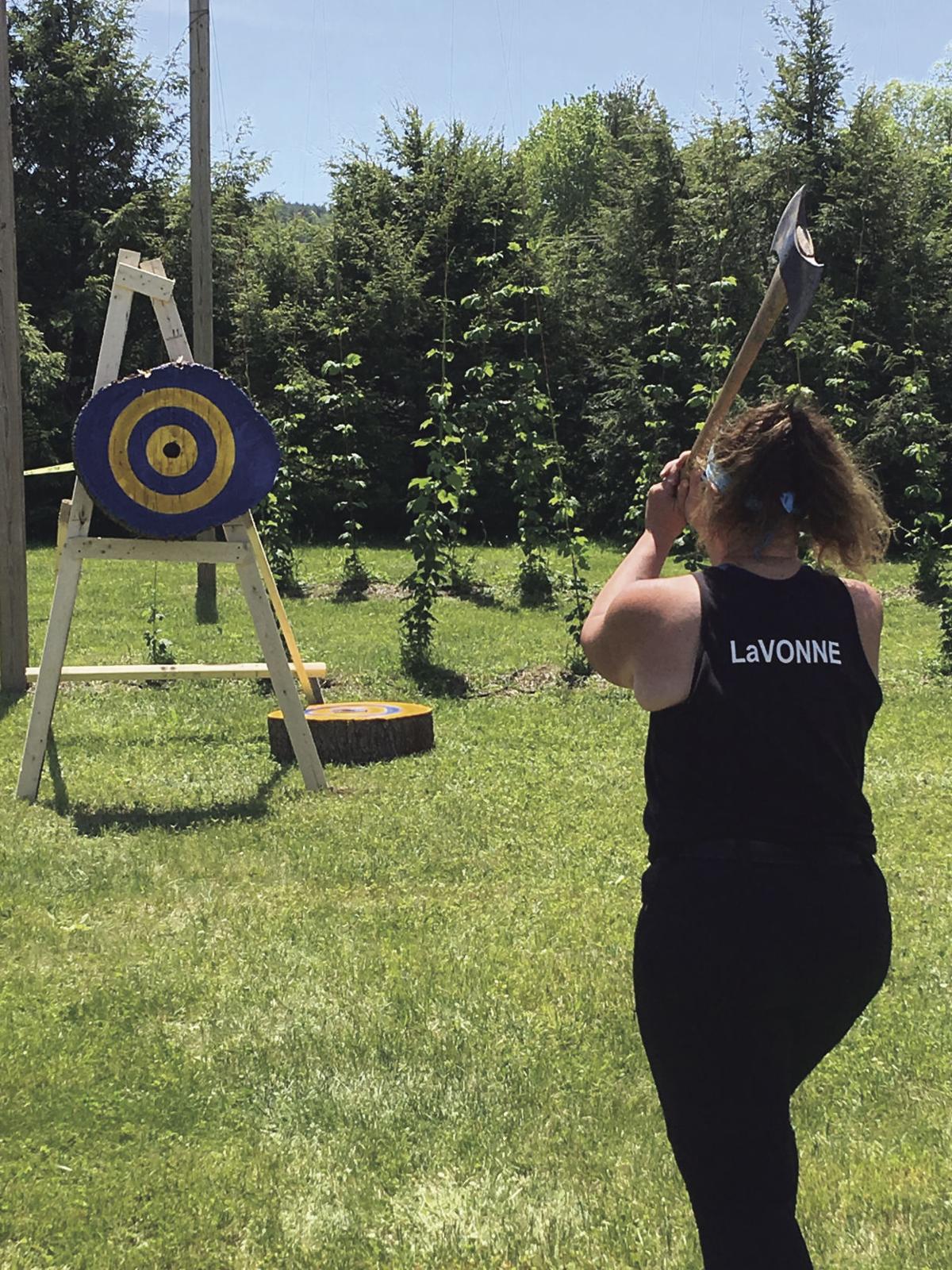 LaVonne Mikloiche of Union Dale, Penn., was one of the competitors in the Lumberjack Festival, hosted by Tuckerman Brewing Co. Saturday. (TOM EASTMAN PHOTO) 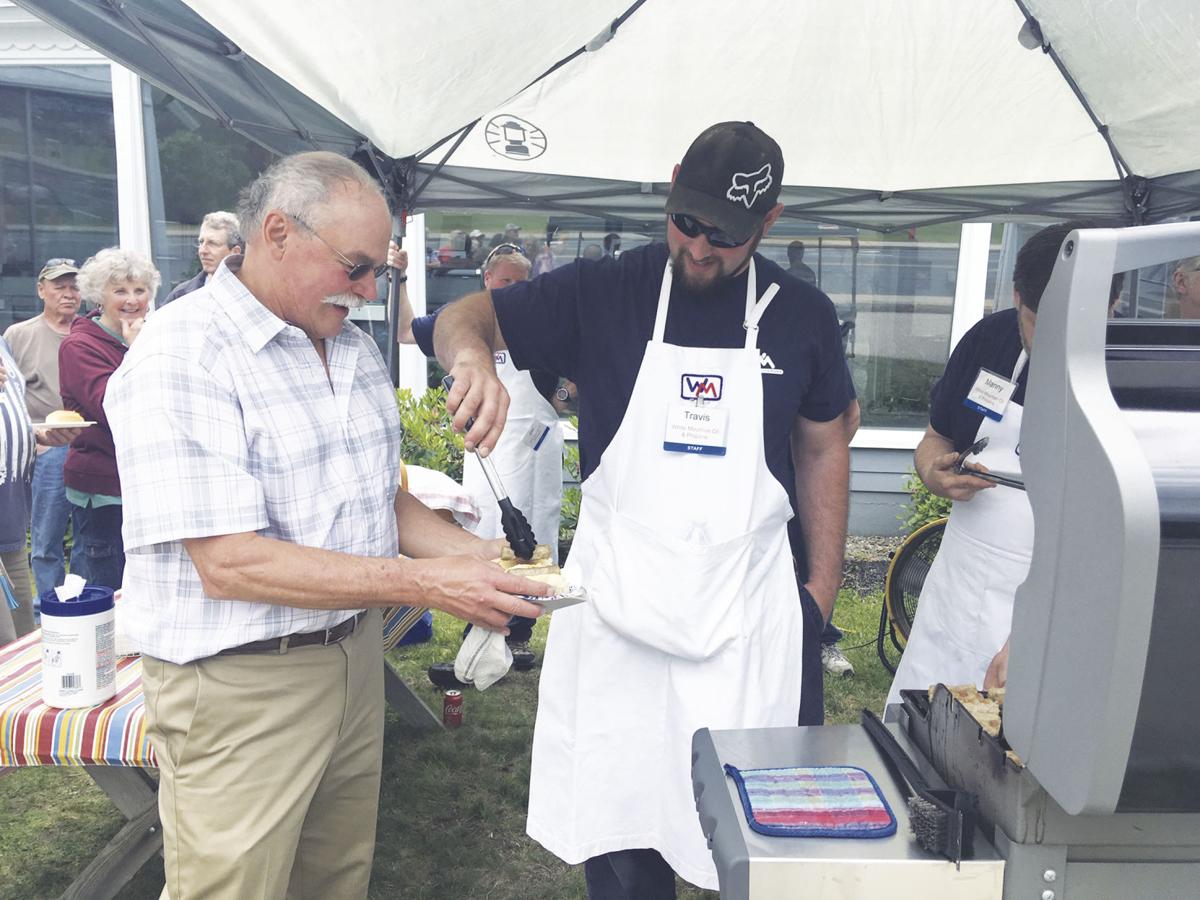 For the third year, the Conway Area Lions Club is selling raffle tickets for the chance to win a 12-foot Old Town Dirigo 120 kayak. Shown at last Saturday's Lumberjack Festival selling tickets were (from left) Rick Lammey, Andy Wilder and Janet Lottmann. Tickets are $5 each or five for $20. The drawing will be held in front of Badger Realty in North Conway Sept. 7. Proceeds benefit the Miranda Center for Diabetes. Go to conwayarealions.org to buy tickets. (TOM EASTMAN PHOTO)

LaVonne Mikloiche of Union Dale, Penn., was one of the competitors in the Lumberjack Festival, hosted by Tuckerman Brewing Co. Saturday. (TOM EASTMAN PHOTO)

HAPPY FATHER’S DAY AND KHS GRADUATION WEEKEND! From golf outings and going fishing with chums to riding the rails of the Conway Scenic Railroad, dads can live it up on their special day.

• Conway Scenic Railroad: Passengers can partake of complimentary appetizers on board the First Class Parlor Car, the Gertrude Emma, and all dads enjoy a free cup of coffee and doughnut in Conway. All Valley Trains this weekend go to Conway with departures at 11:30 a.m., and 1:30 and 3:30 p.m.

Once in Conway, about an hour will be allowed to enjoy special Father's Day activities, displays, and demonstrations there, including barrel car and motorcar rides for the kids, and dads can test their skills at operating small construction equipment performing not so ordinary tasks.

• Story Land: $5 off tickets for everyone when purchased at the gate on Father’s Day.

• The Wright Museum of World War II: All fathers are admitted free on Father’s Day with one paid family member.

• AMC Highland Center: Join the Highland Center for a Father’s Day Hike & Picnic. Families can choose either a one-hour hike or three-hour hike, followed by a picnic lunch. Call (603) 466-2727 to make reservations.

And congrats to all the graduates, and a hearty thank you to Kennett High Principal Neal Moylan upon his impending retirement July 1 after 20 years in education at Kennett. Neal cares deeply about his students and staff, and we wish him well.

LUMBERJACK WRAP: I joined the big crowd at Tuckerman Brewing Co. in Conway Village last Saturday for their first lumberjack and lumberjill competition, held outdoors from noon-5 p.m. There also was a keg toss competition and a beard competition.

It seemed like a real winner of a new event, perfect for families looking for a fun local outing, with a Fryeburg Fair flavor to it.

“We are very happy with the turnout, and, yeah, we expect this will be back next year, too,” said Kirsten Neves of Tuckerman Brewing.

Later that day, they hosted acoustic music inside the Tasting Room from the duo Martin and Kelly with a sort of rockabilly twist. The Riley Parkhurst Project plays today from 3-6 p.m. A “Wicked Rides Car Show” at the brewery to benefit Kevin Peare Memorial Skate Park is set for June 22 from 10 a.m.-3 p.m.

VALLEY HOCKEY FANS are bemoaning the 4-1 loss by the Boston Bruins in Game 7 on Wednesday night at Boston Garden to the St. Louis Blues, but we all have to admit, it was a great series!

And, isn’t it great that both St. Louis and Toronto Raptors fans got to celebrate their franchises’ first-ever championships?

BRATWURST AND BRUINS: I ran into longtime local Bruins fan and company staffer Ellen Belcastro at White Mountain Oil and Propane’s 38th annual Bratwurst Broil and Open House, and she said that although her son Brett (who has season tickets to the B’s) was at first very sad, he also agreed it was a great season.

Per usual, there was a big crowd at the open house. My brother David Eastman couldn't make it and was missed, but just about everyone else was there, from Gary MacDonald and Jeff Flint to Jim Tafuto, Larry Huemmler, Roy Prescott, Darlene and Kevin McEnaney, Jen Kirk Caughey, Jeff Maynard, Dan McCloud, Mark Dindorf, Barbara and Dana Cosby, Bobbie Brown and Gordon Wood and artists Bill Fein and Robert Gordon, to name but a few.

You learn so much about what everyone’s been up to at this annual valley get-together. Between brats, Mark Dindorf told me he is sadly leaving the employ of innkeepers Les Schoof and Ed Butler at the Notchland Inn in Hart's Location to work for Joe Berry (also seen at the Bratwurst Broil) as guest services director for Attitash Mountain Village.

We wish Mark well in his new endeavor.

In another transition, sales manager Dana Jones told us he will be leaving his post come July after 41 years of working for the Saunders family at White Mountain Oil and Propane. Great job, Dana — you will have to come back next June for one day only to ensure that the good weather streak for the bratwurst broil remains intact!

I DON’T KNOW ABOUT YOU, but switching over to watching the still struggling BoSox after all of the bruising Bruins hockey action is a real change of pace.

Thursday night, I watched the Sox defeat the Rangers 7-6, and it seemed like everything … was … in … slowwwwww motion after the high-paced hockey action of the playoffs. The time it takes some of the pitchers to wind up and deliver a pitch, you could almost balance your checkbook. Speed it up!

Let’s hope that the so-far .500 Red Sox can get back onto their winning ways of last year.

OF COURSE, everyone in Red Sox Nation is sending their thoughts and prayers to former Sox star "Big Papi" David Ortiz as he recovers from gunshot wounds suffered in a bar in his native Dominican Republic on Sunday. He underwent emergency surgery there, then was flown to Mass General on Monday for a second surgery.

The police investigation continues, and suspects have been arrested.

NORMA SALUTE: The Cranmore faithful turned out Monday evening in force to Zip’s Pub for a celebration of life for longtime former Cranmore Ski School Director Norma Haynes. Norma was an original and a female pioneer in the ski school business.

In other passings, Bond MacGillivray shared on Facebook the sad and unexpected loss of former valley skier and personality Fletcher Wilson, 57, in Sarasota, Fla., on June 4. Like Rooster, Fletcher was always a little more passionately alive than the rest of us.

Also on a sad note, we send our condolences to the family of local Moose Lodge and American Legion Post 46 member Karry Holland, who died from cancer this week.

And, as we wrote in Thursday’s paper, the valley lost a true gentleman when artist Ernie Brown died at the age of 75 last Saturday, also from cancer. Stop by the former Heritage New Hampshire mural (now at Settlers Green) and think of a kind thought for Ernie.

A celebration of his art and life will be held at Settlers Green on Aug. 17. Attendees are encouraged to "bring an Ernie" to the event to share art and stories. For more information, email his daughter, Sienna Brown, at sienna.brown@gmail.com.

WORLD'S LARGEST? As you walk along in North Conway Village this weekend, be sure to stop and view what has been replaced by Eastern Slope Inn and Cranmore crews in front of the former Carroll Reed Shop at 2686 Main St. More on this next week!