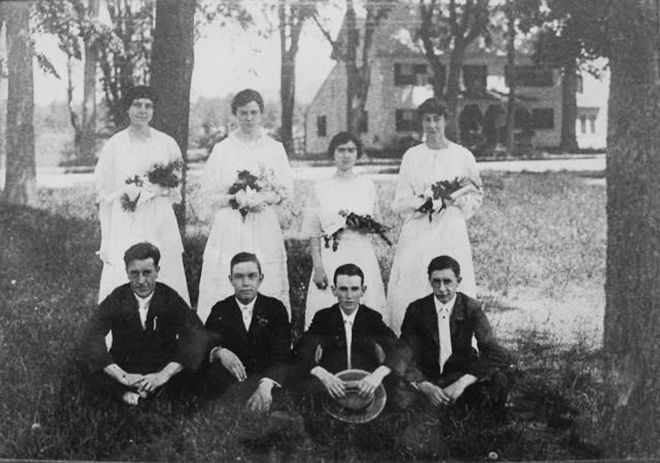 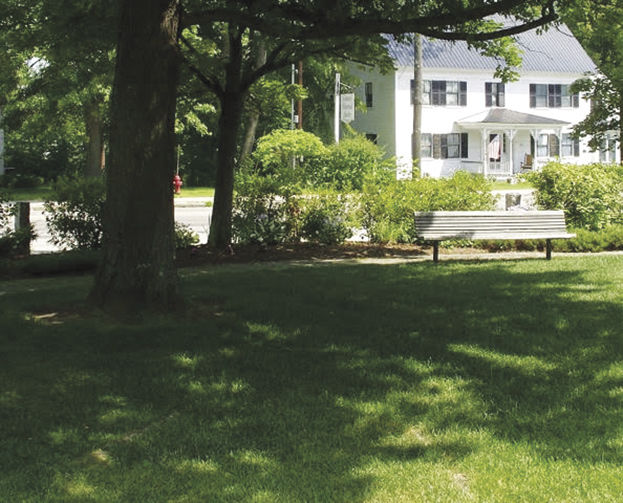 The “new” Conway Village Grammar School, built on the old school lot beside the then-Congregational church on Main Street in 1886, originally accommodated students through the eighth grade. In 1912, the building was jacked up and moved to the back of the lot near Pequawket Pond, and two rooms were added to the rear. That yielded six fairly large classrooms, and each year thereafter one extra grade was added. The last grade started classes in 1916, and in June of 1917, eight Conway Village students became the first in Carroll County to graduate from “an approved first class high school.”

They were the Class of 1917, but what did they call their alma mater? The high school grades seemed to require something other than “Conway Village Grammar School.” The community eventually applied different names to each floor of the school, calling the first level Conway Grammar School and the upper story Conway High School, but that nomenclature appears to have been largely informal.

The eight initial graduates gathered on the lawn for a class photo during their commencement ceremony. We have all their names, and can match them to six of the faces. Standing at left is Hazel Maud Towle, aged 18. Directly in front of her sits her future husband, William Booth Hounsell, aged 20. Judging by a later photo, the short girl would be Ruth M. Long, who lived until 1989 but never married. The other two girls are Marian Clara Churchill and Nellie Ann Dolloff (who soon became Nellie Stuart), but only a surviving relative could say which was which.

Seated at right is Hazel’s cousin, Clayton Towle, who looks much as he did when he served in the Legislature in the late 1970s. Beside Clayton, holding his hat, is Clifford Lowd, who worked for decades at Stone’s Drug Store, a couple of hundred yards down Main Street. That leaves the boy between Lowd and Hounsell to be James Austin Hiscock, who was then only a few weeks past his 15th birthday. He went to the New Hampshire State College — now UNH — majoring in history, but in June of 1921 he came home from college and promptly died of appendicitis, aged 19.

The trees visible in the distance behind the two tallest girls stand on what is now an extension of the village cemetery, and there most of these graduates now lie. Hazel Hounsell was the last of them when she died on Earth Day of 1994, at 95, barely four years after her last stint on Conway’s Municipal Budget Committee.

Bowser Lord’s home still stands across the street, now housing the Conway Historical Society. The old school, later known as Conway Junior High, was turned over to the fire precinct, which burned it down for practice in 1996. The historical society moved the first village fire station to that site, where it was renovated for a music school a dozen years ago, but those tenants are about to abandon it for another site up the street. Perhaps the historical society can lease it to another private school and continue the 193-year-old tradition of education on that spot.