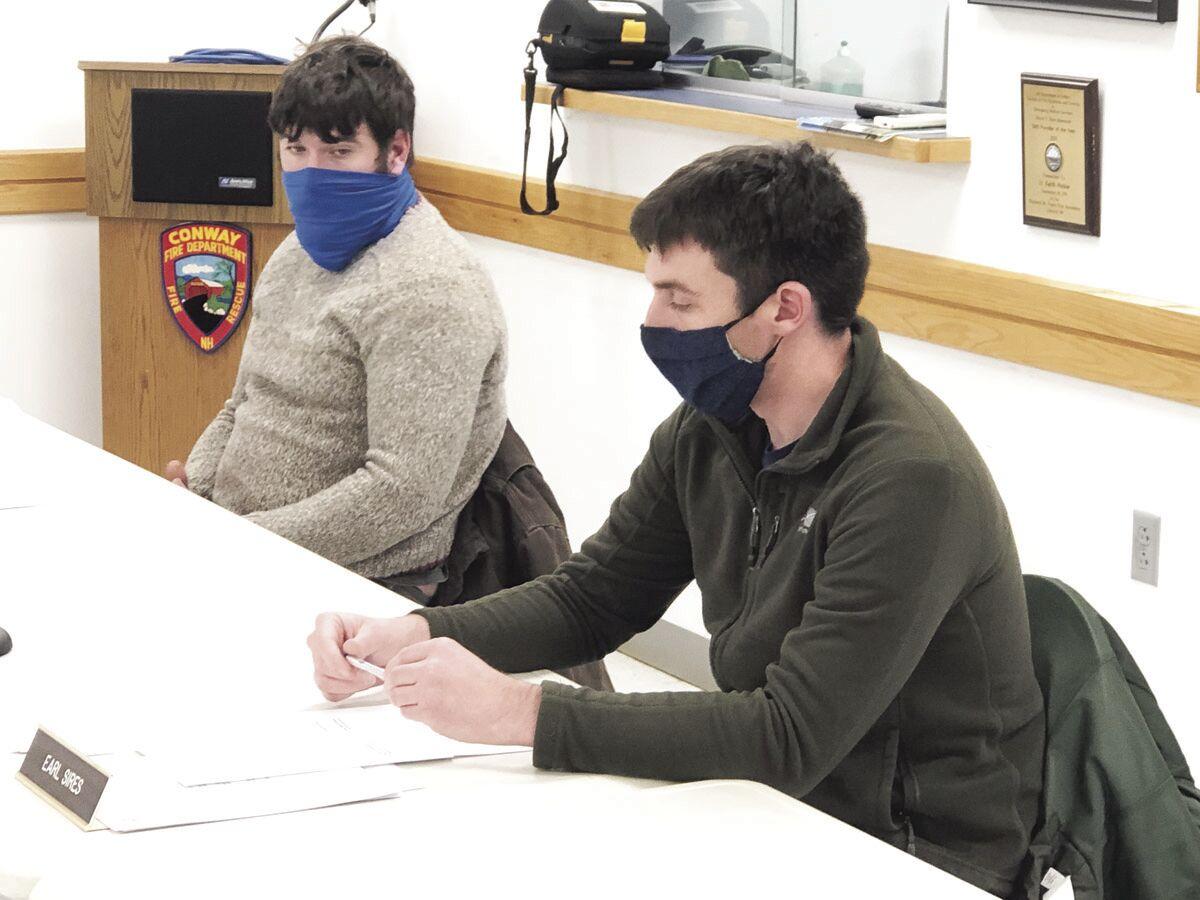 Acting Conway Planning Board Chair Ben Colbath (left) listens as fellow board member Earl Sires IV (right) outlines his proposed cluster development by special exception zoning amendment at the board's Dec. 12 meeting. The amendment will be discussed further at the board's Jan. 28 meeting. It is designed to increase the stock of housing by allowing smaller homes and increased lot density by special exception. (TOM EASTMAN PHOTO) 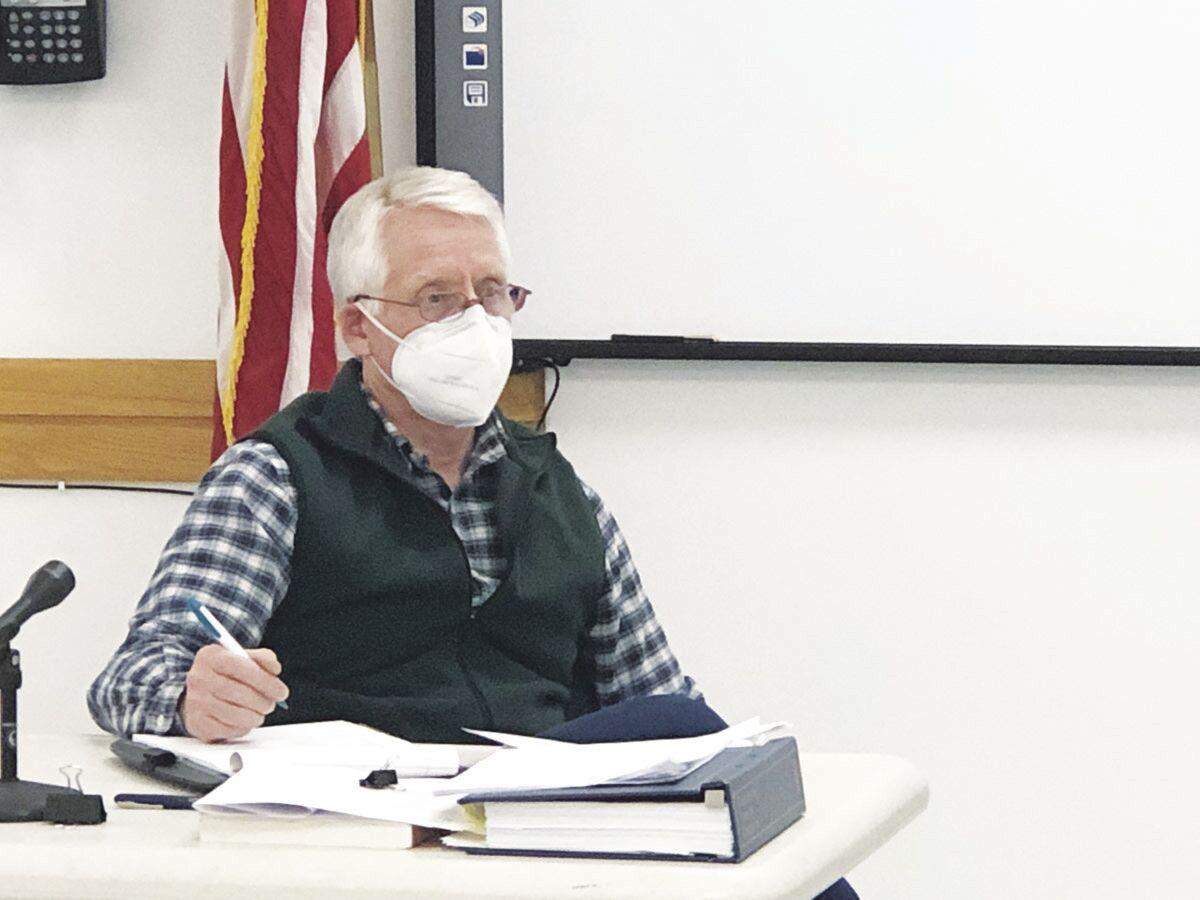 Acting Conway Planning Board Chair Ben Colbath (left) listens as fellow board member Earl Sires IV (right) outlines his proposed cluster development by special exception zoning amendment at the board's Dec. 12 meeting. The amendment will be discussed further at the board's Jan. 28 meeting. It is designed to increase the stock of housing by allowing smaller homes and increased lot density by special exception. (TOM EASTMAN PHOTO)

CONWAY — To encourage cluster construction of affordable smaller homes, a zoning amendment proposed by first-year Conway Planning Board member Earl Sires would cut in half Conway's minimum lot size from one half acre to one quarter acre and allow double the density on additional square footage of a lot.

Entitled “Special Exception for Compact Cluster Housing Developments,” the proposed ordinance will be addressed by the planning board along with other proposed and petitioned special articles at a public hearing at the board’s next meeting Jan. 28.

“The general idea is to create a special exception, so that it’s easier for developers to create smaller dwellings, which hopefully by nature will be a little bit more affordable," said Sires.

How this zoning change is different than the Affordable Housing Ordinance that passed last year is that one requires developers to offer reduced rents on a portion of their developments.

“Developments that qualify for the proposed special exception would not be subject to the ‘affordability’ and ‘eligibility’ constraints prescribed by the Affordable Housing Ordinance. They would also be free of the administrative burden associated with demonstrating compliance with those constraints as well as the deed restrictions that would otherwise encumber the subject properties. There would also be a lot less administrative ‘red tape,’” said Conway Town Planner Tom Irving.

One reason why developers of single-family homes favor building expensive homes is they need the higher price of big homes to offset expensive land and site costs.

The theory is if the cost of the land is lower and they are allowed to build with higher density than developers could afford to build smaller homes and still make money.

The special exception also defines the sizes of the homes to be between 300 and 800 square feet.

While the special ordinance is aimed to encourage cluster developments, Irving acknowledged that assuming other requirements are met, like setbacks, it would allow one small house to be built on one small lot.

“I think a lot of times, people have an image in their minds of a big blocky apartment building, but this would be smaller, and there’d be a lot more freedom in terms of what the developer could design as long as we size requirements,” Sires said.

He said it has yet to be determined whether the units could be duplexes.

“The way that it’s currently written right now is essentially that each of the dwellings would need to be its own structure — however, it may wind up being in the final version that there could be a duplex,” Sires said.

As written, the proposed special exception says: “In order to encourage the development of smaller, single-family detached dwellings and enhance residential housing choices in Conway, the Zoning Board of Adjustment may grant a special exception for compact cluster housing developments under the following conditions:

• All dwelling units shall be in single-family detached structures.

• All dwelling units shall be served by municipal water ad sewer.

• All dwelling units shall have a floor area of not less than 300 square feet nor greater than 800 square feet.

• All dwelling units shall be used for long-term residency, and short-term transient occupancy of any dwelling unit is prohibited.

• The minimum lot size shall be 1/4-acre for the first unit and 5,000 square feet for each additional dwelling unit on a lot.

• The minimum frontage for any lot shall be 75 feet.

Sires said he envisions the units could be “much more attractive, smaller units that could either serve as transitional housing for someone who wants to move here to work and can’t necessarily find a larger house that might suit their needs better. This could be sort of a unit that they can move into while they're settling into the valley.”

“Or,” he added, “it could be something that someone downsizes to — their current home is too large for their needs — someone who you know, had kids, but the kids moved out, there's gonna be a smaller unit, which would free up a larger home for a new family to move into.”

Sires said Irving recommended including a requirement that a development be served by municipal water and sewer. “It could be a starting point and then hopefully, we could kind of open that up over time to make it more doable. If a developer could figure out how to do it without sewer and water, that’d be great,” Sires said.

Irving said the proposal could dovetail with the Affordable Housing chapter to the zoning ordinance that was submitted by petition and adopted by voters at 2020 town meeting. Its intent was “to provide a mechanism to encourage the development of affordable units for moderate and lower-income households to meet the needs of the Town of Conway, to foster economic and social stability within the larger community by providing opportunities for home ownership and long-term rental units and provide for the sustainability of affordable units in the future through the use of deed restrictions and other legal mechanisms and to further the intent of the Town of Conway to meet the requirements described under New Hampshire RSA 674.” For more on that amendment, go to ecode360.com/36753731.

The amendment adopted by voters last spring included a provision that, “At least 25 percent of dwelling units within the affordable housing development must meet the definition of ‘affordable units.’”

Sires said he is not putting in a price provision because he reasons that if homes built were of smaller size then they could be expected to be lower-priced.

“The general idea,” Sires sad, “would be to create some more affordable units, because they’re smaller and the goal is to increase the sort of diversity of housing available in the valley, and that developers (could do so) by allowing for increased density.”

At the board’s Dec. 10 meeting, Sires’ proposal met with general approval from board members, with acting chair Ben Colbath saying, “I think it’s great. It checks off a lot of boxes (for increasing housing stock in the valley).” Others expressing support included Sarah Frechette (who did not attend the meeting in person but who listened in on speaker phone) and Ailie Byers.

Selectmen’s representative Steve Porter, a former planning board chair, said he was initially in favor of the proposal but this week said he wants to hear more about the possible impacts. “I don’t want to see homes stacked upon one another. I want to know what the lot sizes would be,” Porter said Tuesday.

The board Dec. 12 voted to post the amendment for discussion at the scheduled Jan. 28 public hearing.

The board at the upcoming Jan. 28 meeting will also address other proposed amendments, including one which would delete the requirement that property owners occupy a property that has an Accessory Dwelling Unit (ADU). Like Sires’ proposal, the goal of the change is to increase housing stock by allowing both the ADU and the primary home to be rented for long-term rentals without an owner-occupied requirement, Irving told board members at their Nov. 12 meeting.

Amendments will then be put before voters at annual deliberative town meeting March 1 with the vote April 13.

For more, go to conwaynh.org.