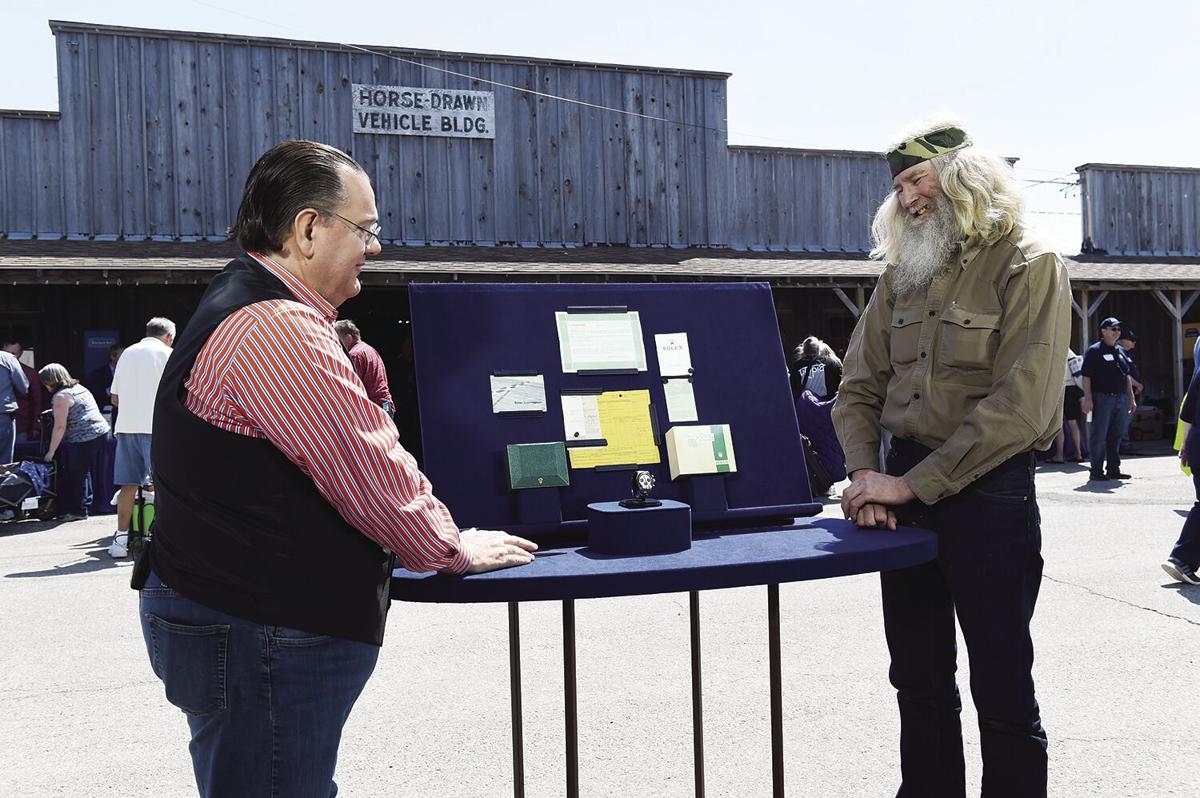 This 1769 powderhorn once owned by a New Hampshire veteran of the Battle of Bunker Hill in June 1775 will be among the items that may be shown on the Sept. 2 "Antiques Roadshow" visit to the Omni Mount Washington Hotel. (COURTESY PHOTO)

This 1769 powderhorn once owned by a New Hampshire veteran of the Battle of Bunker Hill in June 1775 will be among the items that may be shown on the Sept. 2 "Antiques Roadshow" visit to the Omni Mount Washington Hotel. (COURTESY PHOTO)

BRETTON WOODS — On Sept. 2, the Omni Mount Washington Resort will host PBS' popular “Antiques Roadshow," which travels the country in a continuing quest to discover America’s next big find.

In view of the pandemic, this year the show will feature invitation-only filming on closed sets, PBS said.

According to NHPBS' president and CEO, Peter Frid: “New Hampshire PBS is thrilled that the ‘Antiques Roadshow’ crew will have the Omni Mount Washington Resort as their backdrop for their upcoming production. The Granite State is known for its antique shops and avid collectors."

“This is exciting for all 'Antiques Roadshow' fans in the Granite State,” said Dawn DeAngelis, NHPBS' vice president and chief content officer. “'Antiques Roadshow' is one of the most popular shows on NHPBS, and to have the crew filming in our backyard is a once-in-a-lifetime opportunity.”

Craig Clemmer, director of sales and marketing for the Omni Mountain Washington, echoed those comments, noting, "Obviously, we are very pleased to have 'Antiques Roadshow' coming. It's a win-win for the resort and the White Mountains. We all love that show."

“Antiques Roadshow” airs on Mondays at 8 p.m. on New Hampshire PBS (Channel 11 for local viewers) and is reportedly the most-watched ongoing PBS series. It also airs at 9 p.m. on Maine PBS (Channel 10 in the Spectrum lineup).

So how does one get invited to be on the show? Like anything else, you have to apply. An email went out in June to fans of the show; winners were selected through an “Antiques Roadshow” 2021 Appraisal Contest that asked them to submit their personal treasure and story behind it.

Season 26 will premiere the first Monday of January and new shows will have their first airing sometime between January and May, according to show producer Marsha Bemko of Cambridge, Mass., now in her 22nd year with the program.

Built in 1902, and host of the 1944 Bretton Woods Economic Monetary Conference, the Omni Mount Washington's distinctive history and proximity to Boston were factors in its being chosen for Season 26, according to Bemko.

“Being from Boston, all of us are excited to be coming to the Omni Mount Washington. It has so much history, which is always something we look for, and it’s so beautiful,” Bemko said Tuesday, noting that she grew up skiing in New Hampshire and has long appreciated the hotel’s history.

Due to COVID concerns, she said producers wanted to limit their air travel as much as possible when they were planning Season 26 — and the Omni Mount Washington fit the bill. “It also has plenty of outdoor space, which we will use for the shoots,” said Bemko.

She said the film crew will shoot guests and experts with items to be appraised and will also shoot “B roll” on other aspects of the resort.

She said a crew of about 85 (20 program staffers, 28 traveling crew and 37 local New Hampshire crew) will work the show and that the show will feature approximately 95 guests, each of whom will appear just once. There will also be 52 experts to do the appraisals.

“For the most part, many of the experts have been with us from the beginning. We have a pool of about 170 people. We have a roster of people to go to — that job was harder at the beginning of the show but now the appraisers want to be on the show,” said Bemko.

One entrant from Nashua with ties to the valley shared the news that she was invited to come to the Omni next week.

Mary (the show asks that last names not be given to protect the privacy of the antique owners) told the Sun her antique is a family heirloom powderhorn dating from 1769 that once belonged to an ancestor who lived in the Danville area and served as a drummer at the Battle of Bunker Hill during the Revolutionary War.

“I am so excited that they asked me to appear on the show with the powderhorn, to be appraised — which of course, is priceless to our family. But I do want to hear what they have to say about it. I am pretty sure he brought it to the Battle of Bunker Hill with him,” said Mary, who said she believed her item was selected because of its ties to New Hampshire history.

The 26th season’s five-stop tour started Aug. 10 at the Wadsworth Mansion in Middletown, Conn. After the Omni Mount Washington Resort stop, the tour is scheduled to continue to the Hempstead House at the Sands Point Preserve, Long Island, N.Y., Sept. 14; Colonial Williamsburg, Williamsburg, Va., Sept. 28 and Grounds For Sculpture in Hamilton, N.J., Oct. 6.

The program is sponsored by Consumer Cellular, Ancestry.com and American Cruise Lines. Additional funding is provided by public television viewers.

For more information, go to nhpbs.org.