The Kennett High boys' lacrosse team hopes to make its mark in the open tournament next month. (LLOYD JONES PHOTO) 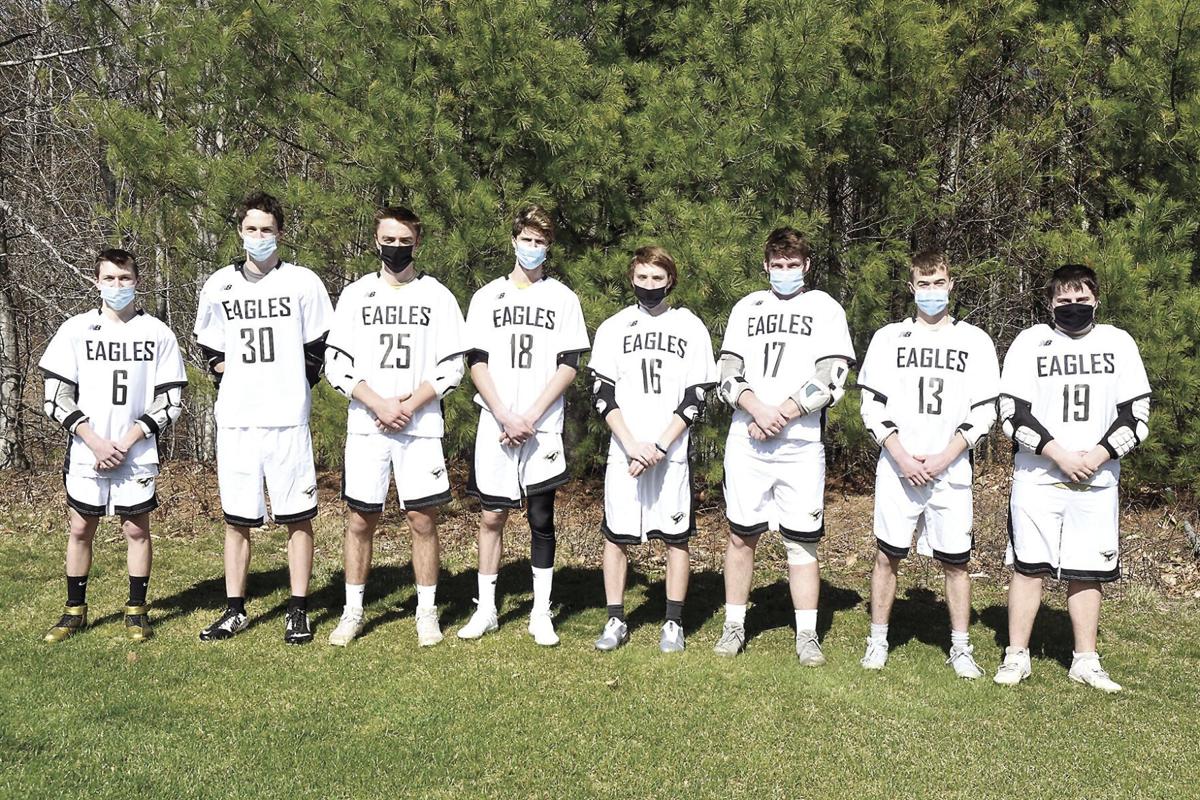 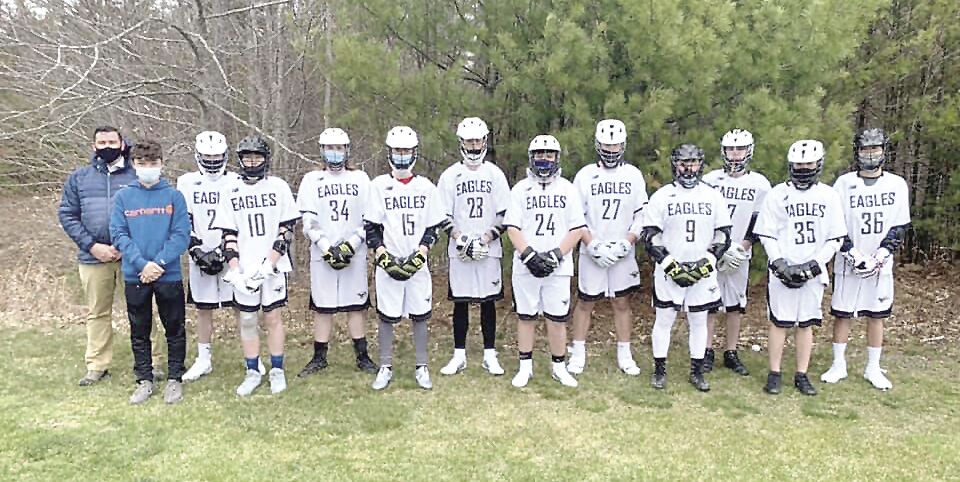 The Kennett JV boys' lacrosse team earned its first victory of the season on April 22 with a 7-6 overtime win against rival Kingswood. (NEAL WEAVER PHOTO) 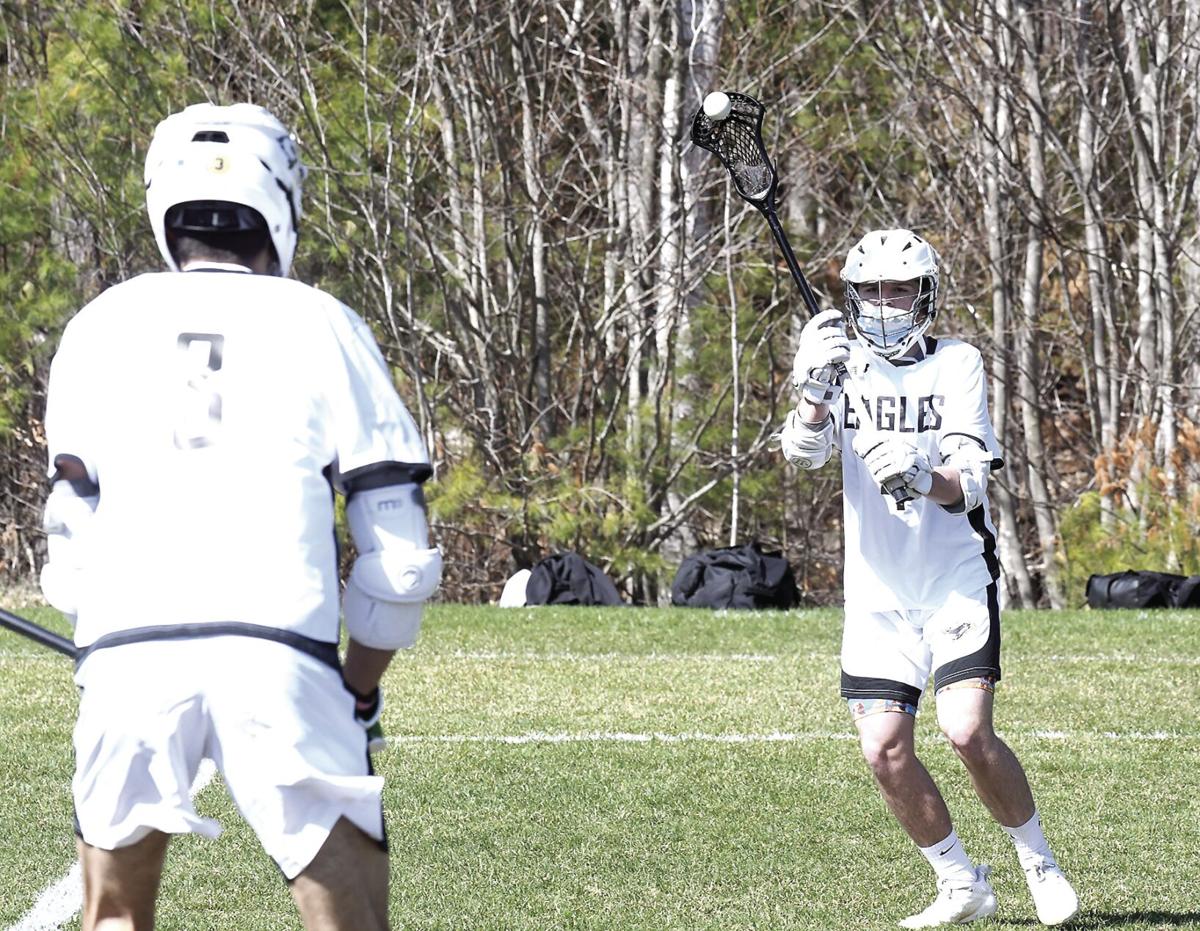 The Kennett High boys' lacrosse team hopes to make its mark in the open tournament next month. (LLOYD JONES PHOTO)

The Kennett JV boys' lacrosse team earned its first victory of the season on April 22 with a 7-6 overtime win against rival Kingswood. (NEAL WEAVER PHOTO)

CONWAY — “At least we’re playing,” that how Coach Steve Graustein sums up this spring for the Kennett High boys’ lacrosse team amid all of the challenges the COVID-19 pandemic has created.

“I couldn’t say that last year,” Graustein, who is in his third year at the helm of the program, said by phone on Tuesday. “Doing remote last year was one of the most interesting things I’ve ever participated in. Fortunately, we had a group of boys who stuck it out and earned their varsity letters.”

The New Hampshire Interscholastic Athletic Association canceled all spring sports in 2020 due to the coronavirus. Kennett’s sports teams met virtually through that spring working on skills and drills. The Eagles even held spring sports awards with Coach Graustein presenting the KHS Lacrosse Award to then-seniors Trevor LaRusso and Reilly Murphy.

“John is kind of a mentor for me,” Graustein said of Barry. “He coached at Pinkerton Academy for more than 30 years, he’s a legend.”

There are 35 boys out for the program. Graustein is carrying 19 boys on the varsity team.

“It was a democratic process, I’m happy with the choices,” said Graustein.

He added: “One of the things I like about this year’s team is the leadership of all of the older guys. They’ve played together a lot. I’m also starting to see the sophomores step up and are starting to fit in and contribute.”

Kennett fell in season-opener to Plymouth on the road, 12-5 on April 20. Due to COVID contact tracing, the Eagles were missing players and had been limited in their preseason practices before the match. KHS trailed 3-2 after the first quarter, 6-4 at halftime and 10-4 after the third quarter.

Dalton Petell scored two goals for KHS and led the team with five ground balls. Graustein, Murphy and Fayle also netted goals. For Fayle and Murphy it was their first varsity goal.

Making his debut in goal, Stearns made seven saves.

The Eagles were sharper and had a deeper bench in an exhibition game against Stateline neighbors Fryeburg Academy last Friday. On Senior Day for the Eagles, Kennett fell behind 2-0 to the Raiders in the first quarter on two Will Galligan goals, but then rattled off the final 15 goals in the match for the 15-2 win.

Fisette and Mojica also netted their first varsity goals and finished with three and two, respectfully, on the day. Ferry also netted a pair of goals and added an assist.

The ground ball leader for the game was Wrobleski with six of the team’s 21.

The Eagles were successful on 15 of 44 shot attempts.

Stearns made eight saves in the win.

“Kyle is doing a very good job,” said Graustein. “For a first-year goalie only playing his second game, he’s eager to learn and wants to get better.”

Coach sees defense as one of the team’s strong suits with Wrobleski, Bennett and Gagne. Santuccio and Shaw also help the defense as long stick middies.

The New Hampshire Interscholastic Athletic Association had an open tournament last fall and winter for multiple sports with everyone making the playoffs and initially playing in a regionalized cluster in the opening rounds of post-season play.

“I think the open tournament is a very good thing,” said Graustein. “It’s fair for everyone. It means we’ll all get another game and hopefully more.”

The Eagles have talked about goals for the season.

“We want to make the program better and to improve our lacrosse IQ,” Graustein said. “We want to improve our overall playing ability. Secondly, we want to win some games, hopefully, more than two years ago; have a good showing in each game and be competitive. The kids are working hard.”

Kennett is scheduled to host rival Kingswood on Tuesday (4 p.m.) in the first game of a home-and-home series, which is slated to wrap up in Wolfeboro on Thursday at 5:30 p.m.