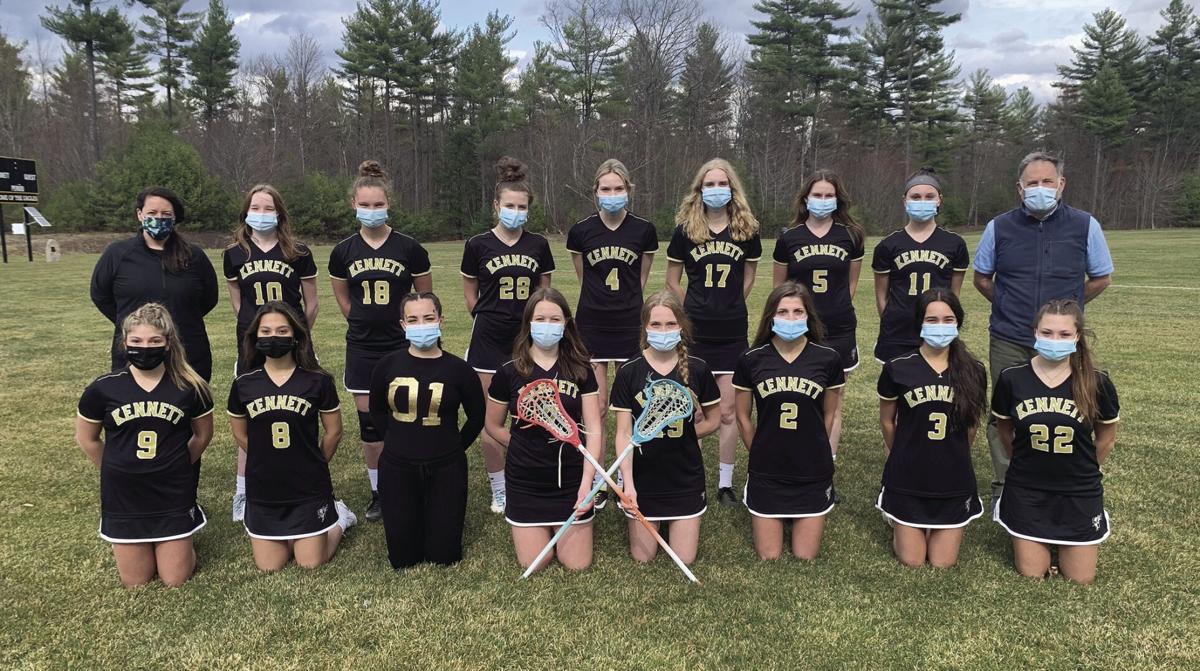 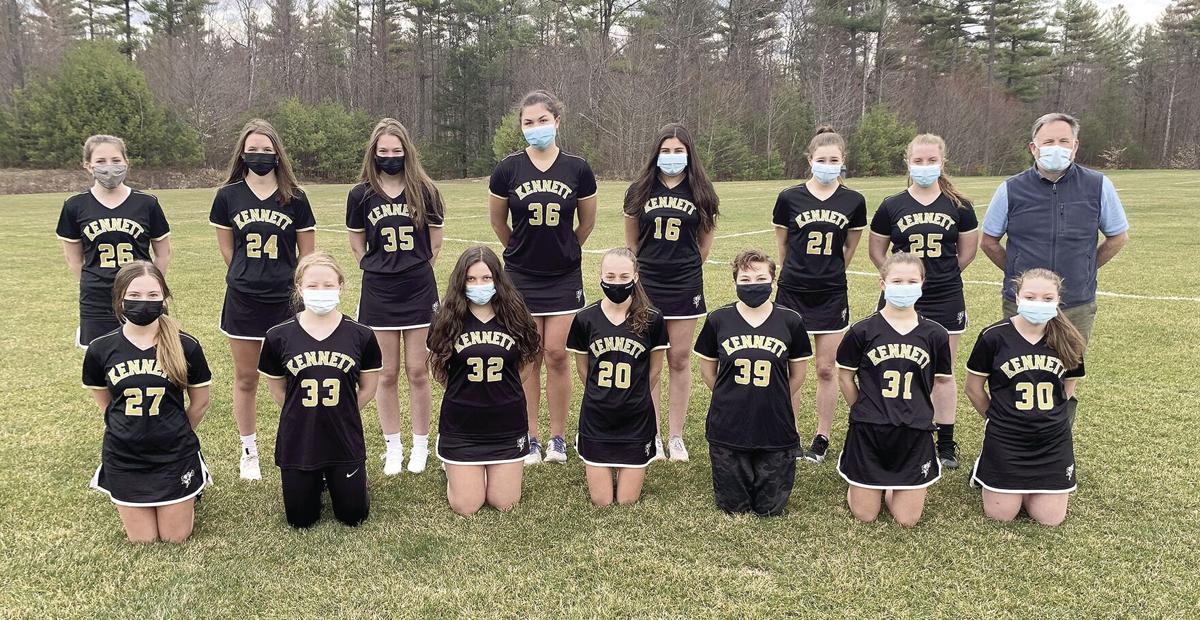 The Kennett High junior varsity team is getting better with every practice under the leadership of Coach Chris Meier. (NEAL WEAVER PHOTO)

The Kennett High junior varsity team is getting better with every practice under the leadership of Coach Chris Meier. (NEAL WEAVER PHOTO)

CONWAY — This year’s Kennett High girls’ lacrosse players are trailblazers for the sport on Eagles’ Way. After earning varsity status for the program last year, the Eagles saw their season stymied by COVID-19, which meant no games were played but the team was able to do skills and drills remotely with then-new Coach Jennifer Laine.

The hometown flock, like many of the spring sports teams at KHS was hit with a bout of COVID this spring, forcing the Eagles to quarantine for 10 days. KHS returned to practice last week, got in a day of training and then played host to Plymouth at Centola Field on April 20 in its first official varsity game. Despite not having a full squad due to coronavirus cohort quarantining, the Eagles gave the visiting Bobcats all they could handle for the first three quarters before the girls from Plymouth pulled away for the 14-8 win.

“The girls faced a lot of adversity and responded well,” said Laine. “We were essentially tied with them at halftime. Plymouth broke away in the final 7 or 8 minutes. For a first game, I was super proud of the girls and the effort they put forth.”

Laine and Assistant Coach Chris Meier, who also coaches the junior varsity squad, had 32 girls come out for the sport this spring.

“I can’t say enough about Chris and what he means to the program,” Laine said. “He has such a passion for the game. All the stuff that he does behind the scene to support the kids is so helpful.”

Last year, Laine and her team never got to see each other except by computer as the New Hampshire Interscholastic Athletic Association canceled spring sports for 2020. The Eagles did complete the virtual season with Laine presenting the Eagle Award to sophomores Cassandra Irish and Jordan Meier.

“I’m very excited to share my love of the game with the team,” Laine said last May about remote practices, “It has been fun to watch our players learn new skills, play creatively and take initiative. I can’t wait to see them grow in person.”

Laine has been impressed with players and have they have handled every hurdle the virus has thrown at them.

“The girls have adapted, they just keep going,” she said. “My No. 1 hope is to share my love of lacrosse with them, seeing them outside, being healthy and having fun. If I can teach them the fundamental skills of the sport, they’ll have even more fun.”

Laine, who grew up in Westborough, Mass., and began playing lacrosse as a freshman after not getting a part in the school’s spring musical, quickly developed a passion for the sport. She continued playing at Assumption College, and upon graduation in 2006, she had 221 points on 188 goals and 33 assists. Elected to the Assumption Sports Hall of Fame in 2018, she remains the leading point and goal scorer in Assumption women’s lacrosse history and was a two-time laxpower.com All-American. She was a four-time Northeast-10 All-Conference selection, including a three-time First-Team honoree.

“I’ve really drawn from that,” she said. “I think the thing about lacrosse here at Kennett is that it’s a brand new sport, there are no expectations. The players can go and enjoy the process of learning without the pressure.”

The Eagles are going with freshmen in goal with Graustein and Goodman.

“It takes a lot of heart to play the position,” said Laine. “You have to be mentally and physically tough, and Liza has that mental toughness.”

Graustein is also a strong defender when not in net. Also playing defense are Brett, Arnold and Novak, who was named the MVP of the first game. “She created so many turnovers,” said Laine.

In midfield, Cummings is a steadying influence along with Chandler, Ava Gaudette, Meier, Vaughan, Irish, Curry and Carboni.

“We’ve been playing with only about half our roster because of all of the (COVID) regulations,” said Laine. “Next week should be the first week where we have the full varsity roster.”

The Eagles played Plymouth a second time, playing in Plymouth on April 22 on a brutally cold afternoon with high winds and snow. The Bobcats got the win.

“It was more like arctic conditions than spring-like,” Laine joke. “I was in snow pants and shivering. The girls showed so much heart. It did;t matter how cold it was, they never gave up.”

Laine is happy to see the Eagles playing and improving every day.

“We have to remember with all of this COVID-chaos, we still get to play,” she said. “We’d love to win a couple as we’re learning. I want them to enjoy this experience.”

“My hope is we can develop a summer league for incoming eighth-graders up to seniors in order to continue to develop the depth,” she said.

Laine has a summer camp planned for Aug. 2-6 for girls in grades 4-7 from 9 a.m. to noon and for grades 8-12 from 5-8 p.m. Joining Laine will be her sister, Emily, who was a standout at Southern New Hampshire University where she graduated in 2012 as the school all-time leader in goals and points.

Kennett, which played Stateline neighbor Fryeburg Academy in a scrimmage on Tuesday, is scheduled to travel to Wolfeboro on Tuesday to play the Kingswood Knights at 5:30 p.m. in the first of a home-and-home series which is slated to culminate in Conway on Thursday at 4 p.m.