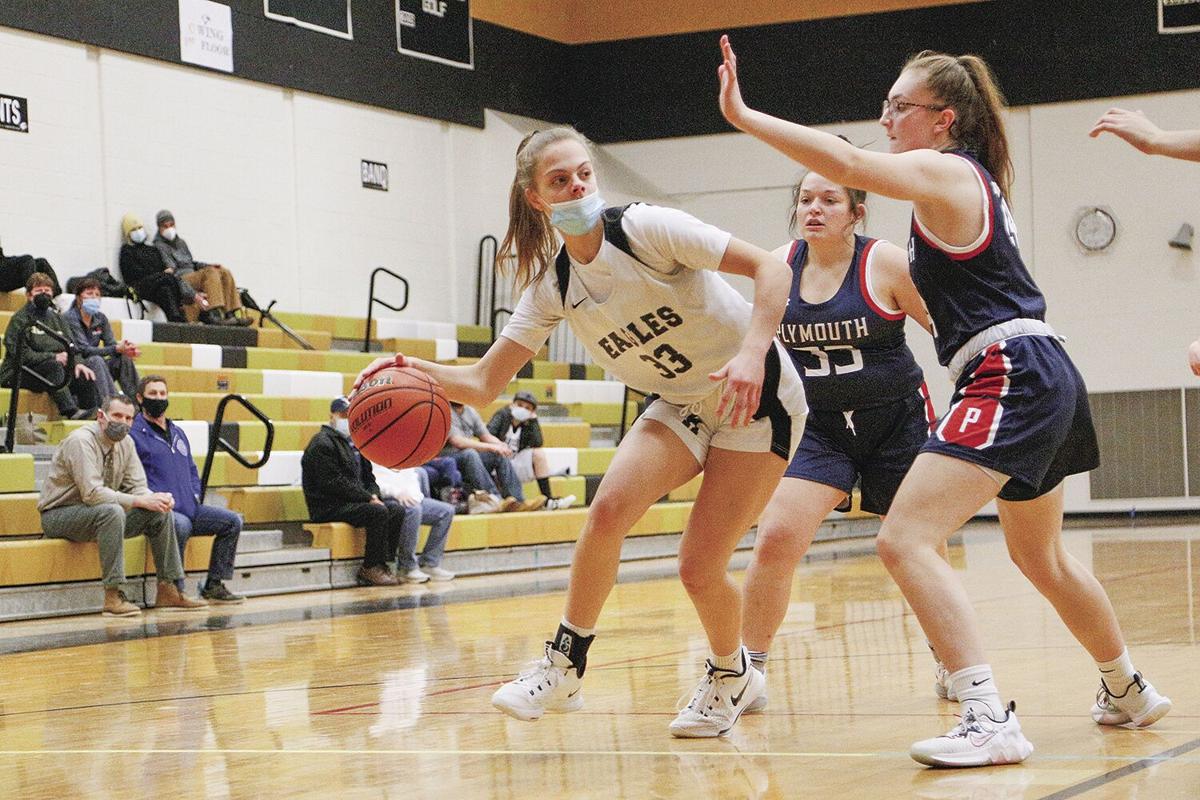 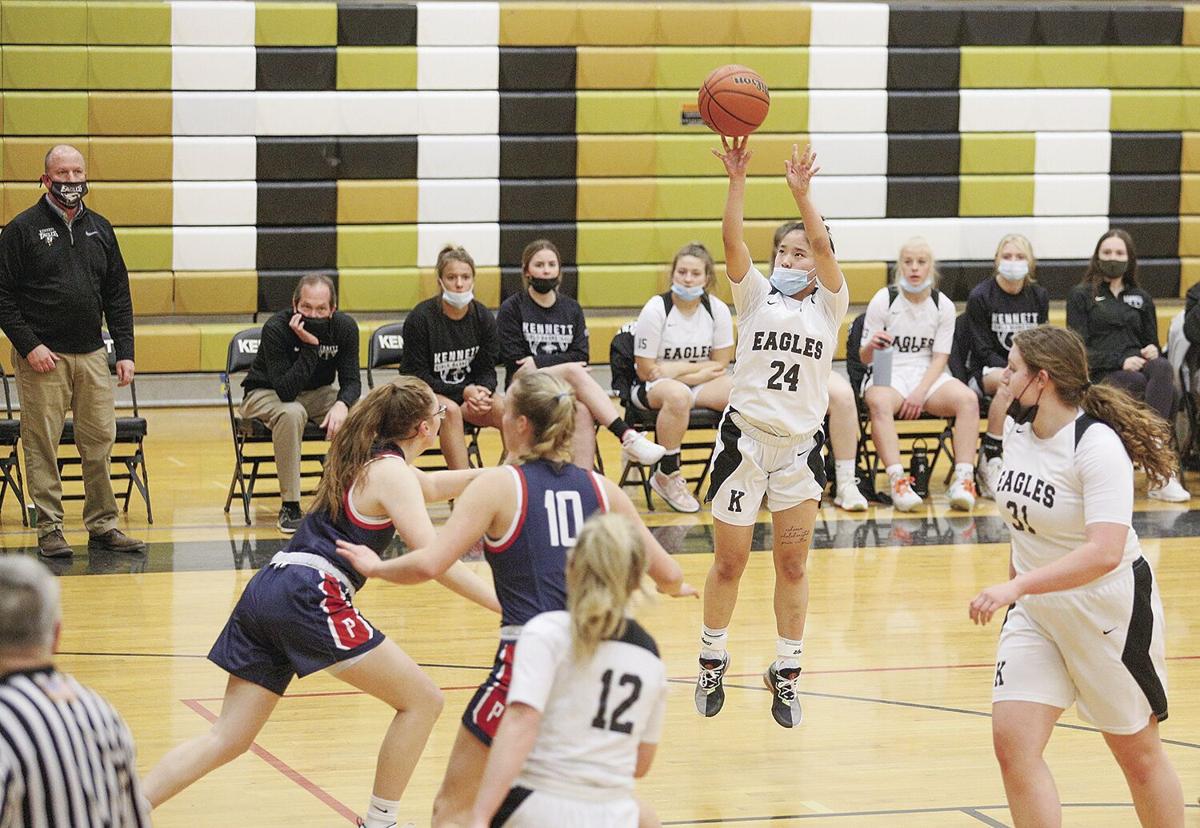 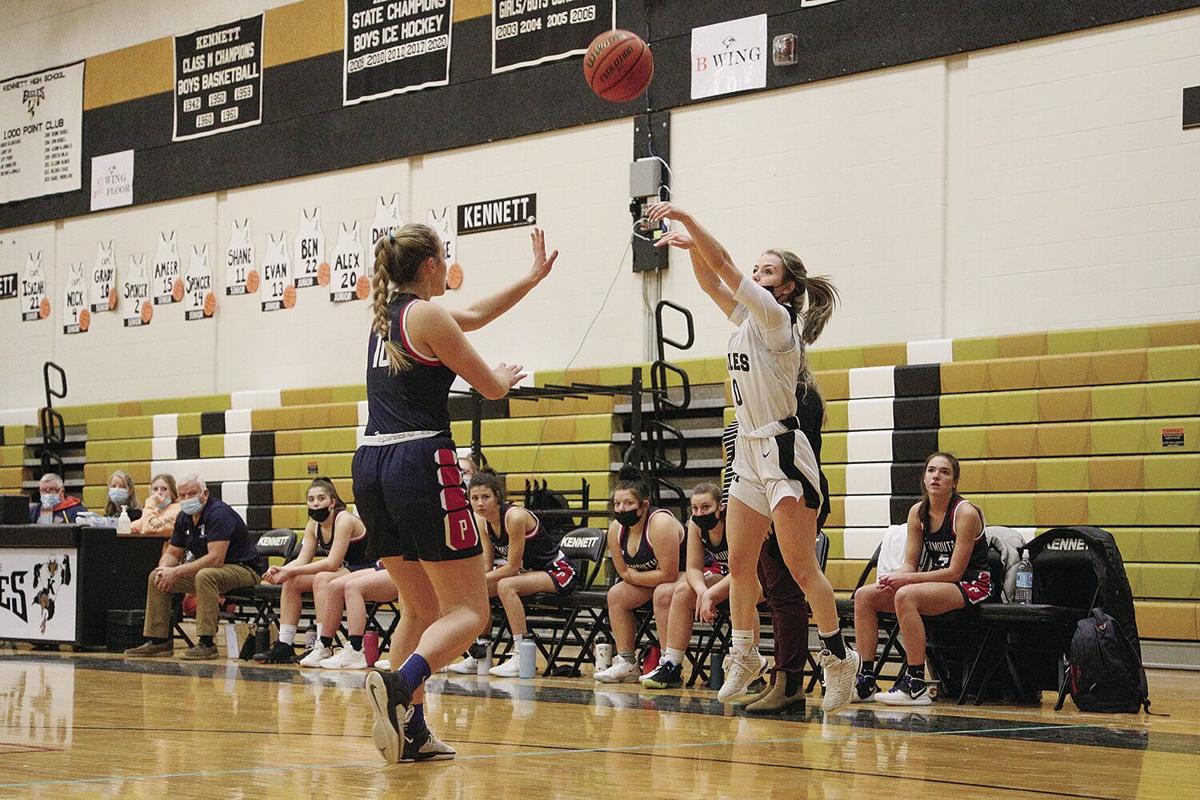 Junior Hope Elias takes a three-pointer at the Kennett girls basketball game against Plymouth on Wednesday. The Eagles dominated the night to win 57-23. (RACHEL SHARPLES PHOTO)

Junior Hope Elias takes a three-pointer at the Kennett girls basketball game against Plymouth on Wednesday. The Eagles dominated the night to win 57-23. (RACHEL SHARPLES PHOTO)

CONWAY — The Kennett High girls’ basketball is hitting its stride. The Eagles moved above the .500 mark with a pair of wins this week and are currently riding a four-game win streak.

In a rematch of last year’s Division II State Championship Game, Kennett got a measure of revenge against Bishop Brady in Concord on Monday. Talented junior Sydnie Chin outscored the Giants by herself, pouring in a career-high 25 points in the 65-22 victory.

On Wednesday, in the friendly confines of the Peter Ames Gymnasium, the Eagles handled rival Plymouth easily 57-23.

The wins lift Kennett to 6-5 in Division II and 10-5 overall after winning the 42nd annual Mike Lee Holiday Basketball Tournament in Farmington over the Christmas break.

Against Bishop Brady (1-7), the Eagles were ready for everything their hosts threw at them.

“We played very well,” Larry Meader, Eagles’ head coach, said. “It was probably our best game of the year so far. We played great defensively. Brady plays that same style like last year where they like to get out and run and will jack up a three-pointer as quickly as they can. We didn’t have practice on Sunday but did a quick walkthrough before we got on the bus and the girls went out and executed the game plan perfectly.

Libbey Hicks, who scored a game-high 22 points in the state championship game, was held in check by the girls from Conway, namely junior Kaylee McLellan.

Meader also had junior Hope Elias stick to the Brady point guard like a glove.

“Hope picked her up at three-quarter court and slowed her down,” said Meader. “We did what we wanted to defensively.”

On offense, it was “The Syd Show,” as Chin was en fuego (on fire) all night.

“They couldn’t stop her,” Meader said. “She knocked down three 3-pointers and had eight 2-pointers.”

McLellan added 12 points in the win, while Elias had eight; Kaley Goodhart and Sam Sidoti, six each; and Catherine Chick and Lagan Tatarczuk, four apiece.

Against Plymouth, KHS jumped out to a quick 14-0 lead (a McLellan off-balanced layup; a Sidoti baseline jumper; a Sidoti layup off a nifty pass from McLellan; a Goodhart floater in the lane; a left-handed layup by Sidoti; and two free throws by Chin followed by a layup off a Goodhart inbounds pass) and never looked back. The Eagles led 27-5 after the first period; 36-13 at halftime; and 46-18 after three quarters.

“We came out with the same defensive intensity that we did against Brady,” said Meader.

Chin led all scorers with 14 points while adding nine steals; five rebounds and three assists in the win.

Kennett is scheduled to play one more game this week, making the long trek to Plaistow to play Timberlane (2-4) on Friday at 6:30 p.m.

Here are some shots from the two recent home wins for the Kennett girls basketball team! On Jan. 12, they faced off against Plymouth and easil…