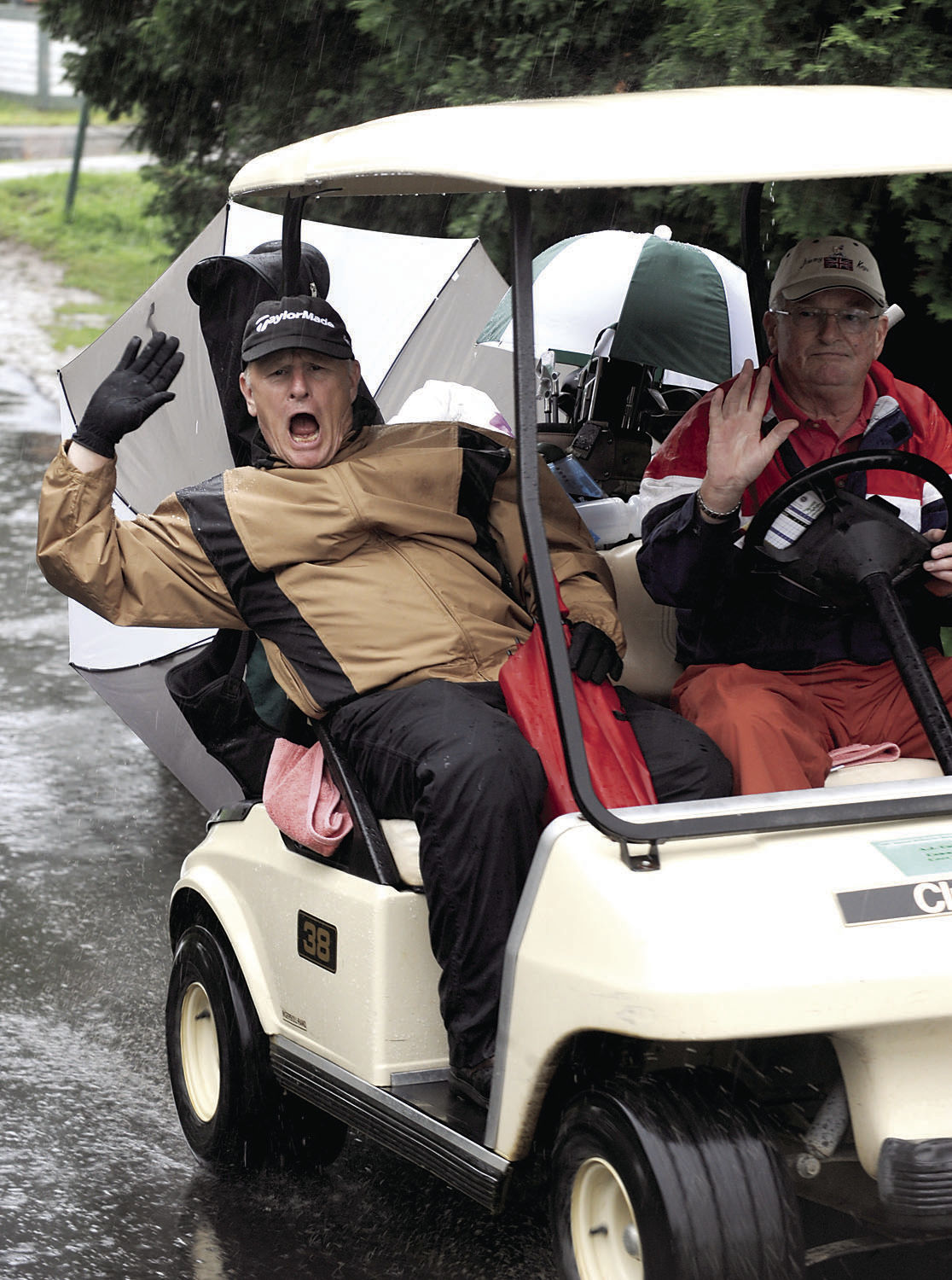 Actor Gordon Clapp and Tommy Mulkern make the most of a wet day on the links during the annual Memorial Hospital Open at Wentworth Golf Club in Jackson in 2008. (JAMIE GEMMITI PHOTO) 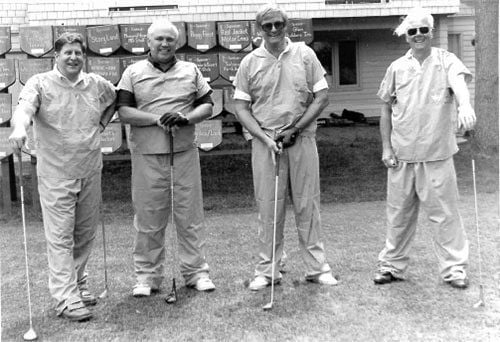 Actor Gordon Clapp and Tommy Mulkern make the most of a wet day on the links during the annual Memorial Hospital Open at Wentworth Golf Club in Jackson in 2008. (JAMIE GEMMITI PHOTO)

CONWAY — Golfers usually measure distances in hundreds of yards. When Memorial Hospital hosts its 40th annual golf tournament this Thursday, July 16, six-feet will be the most important distance to remember.

The annual hospital event takes place July 16 at the North Conway Country Club amid the COVID-19 pandemic. More than 90 golfers, a few less than usual, will participate. The golf game will be the same, but golfers will start at different times during the day, the traditional evening banquet is replaced with an end of round meal prepared by North Conway Country Club chefs, and a video of the day's events posted the next day on the web.

There are still openings in the four-person, best ball, scramble format. To register, go to tinyurl.com/ycbdy6lg.

There are still a few opportunities for sponsorship at this year’s event. for more, go to tinyurl.com/yaf3ohpz.

Tournament proceeds will support students attending the new medical assistant program at White Mountains Community College. The program was originally scheduled to launch this fall but has been delayed due to COVID-19. According to Mary Vigeant, president of the hospital's medical staff and co-chair for the tournament, this program will "provide skilled and talented healthcare staff for the hospital as well as local healthcare offices."

Co-chair Bayard Kennett was unsure whether there would be an event until Governor Sununu issued the proper guidance. Even with this guidance, planners were aware that holding the tournament would send a message to the community that we've entered a new phase of the pandemic and that it was important to model how to hold an event safely and responsibly. "We reviewed all aspects of the tournament, from the golfing to the food to the awards ceremony to make sure we could hold a safe event." The committee even met virtually for most of the spring for additional protection.

North Conway Country Club Manager Kevin Walker says the club follows the governor's guidelines for golfing, including arriving 10 minutes before tee time, using personal clubs (not rentals), not using a caddy, and wearing a mask on the course when social distancing is difficult. "Before golfers arrive, hospital volunteers will work with the NCCC to disinfect each golf cart using the same cleaners that are used at the hospital," Kennett adds. Organizers have also staggered tee times, every 12 minutes from 8 a.m. until 2 p.m. The usual after-golf dinner and awards is replaced by an outdoor meal at socially-distanced tables following their round and an awards ceremony using Facebook Live.

In deciding the time was right to hold their 40th tournament, hospital planners also knew the 2020 event would look different from previous events. And that, Kennett says, is fine with him. "I'm going to miss our evening dinner. Golfers will have staggered starts and finishes to encourage social distancing. The awards ceremony will be virtual. But we will still have done a wonderful thing for our hospital and community by raising funds to support scholarships for future hospital workers."

Despite the late start in planning, Memorial Hospital director of development Melody Nester is thrilled at the response from sponsors and golfers. "We so appreciate our golf tournament sponsors and golfers who have continued to support us even during these challenging times. It is a source of encouragement and will make a big difference in our efforts to continue to meet the health needs of our community."

The first tournament was created in 1980 by the late Lee Harmon (1929-1995), then of the Jack Frost Shop, and former Christmas Farm Inn co-owner and U.S. Rep. Bill Zeliff, who served in Congress representing the First District from 1991-1997.

Then and now, the goal for the tournament was to raise some funds for the hospital, while having fun at the same time. The event has raised over $800,000 over its long history, purchasing many pieces of life saving equipment and supporting community health programs.

"On the day of the tournament, the entire valley, including volunteers and players, comes together and enjoys the day for the benefit of the hospital," said Zeliff in an interview. "It is a day off for a good cause! Furthermore, we want to recognize what a great asset we have in our Memorial Hospital and as a citizen of the Mount Washington Valley, to pay tribute to the hospital and their employees."

Always a gifted promoter, Zeliff has used his political strings to add to the tournament's luster by enticing New Hampshire political and media figures to be part of the tournament.

"During my years as governor, I really did try and give a lot of focus to the recreational economy of the state and be as much a part of it as I could: the press generally would cover wherever I went as governor, and the more I could generate news stories that would help people understand the family fun that New Hampshire had to offer, I was happy to do it," said Sununu, who, like the other celebrity participants, always donned hospital medical "scrubs" attire for publicity shots to help promote the tourney.

Fellow celebrity golfer and actor Gordon Clapp, continued to play in the hospital tourney whenever his schedule permitted.

"Playing in the tourney is a way to give back — I was born at Memorial Hospital. Plus, it's always great to see old friends, including classmates," said Clapp, in an interview from his Norwich, Vt., home.

Perhaps best summing up the volunteers' commitment to the tournament was Jones, a Realtor with REMAX/Presidential of North Conway, who recently relinquished his chairmanship duties:

"I got involved because I was on the hospital board of directors from 1980 to 1989," said Jones. "I have served because of my connection to the hospital and my feeling that it is such an asset to this community: to have the quality of this hospital right here is important to all of us in this community. You don't realize it 'till you need it. Our goal has been to make the hospital the best we can by supporting it."