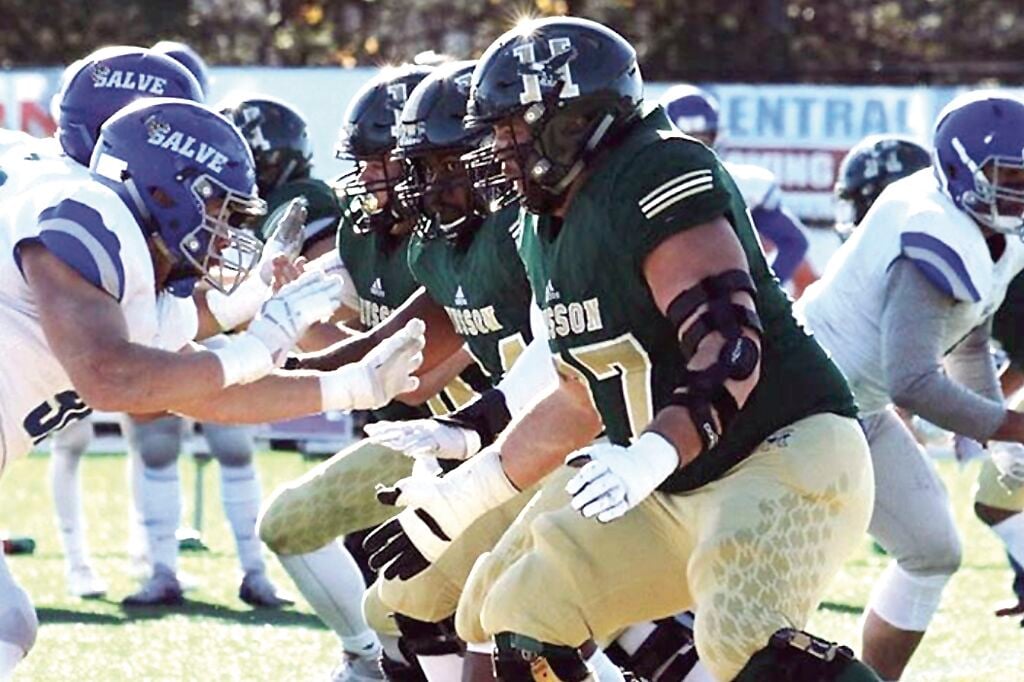 North Conway’s Jacob Cameron is catching the notice of the National Football League teams. A senior at Husson University, he is ranked among the top 20 offensive linemen in Division III. (COURTESY PHOTO) 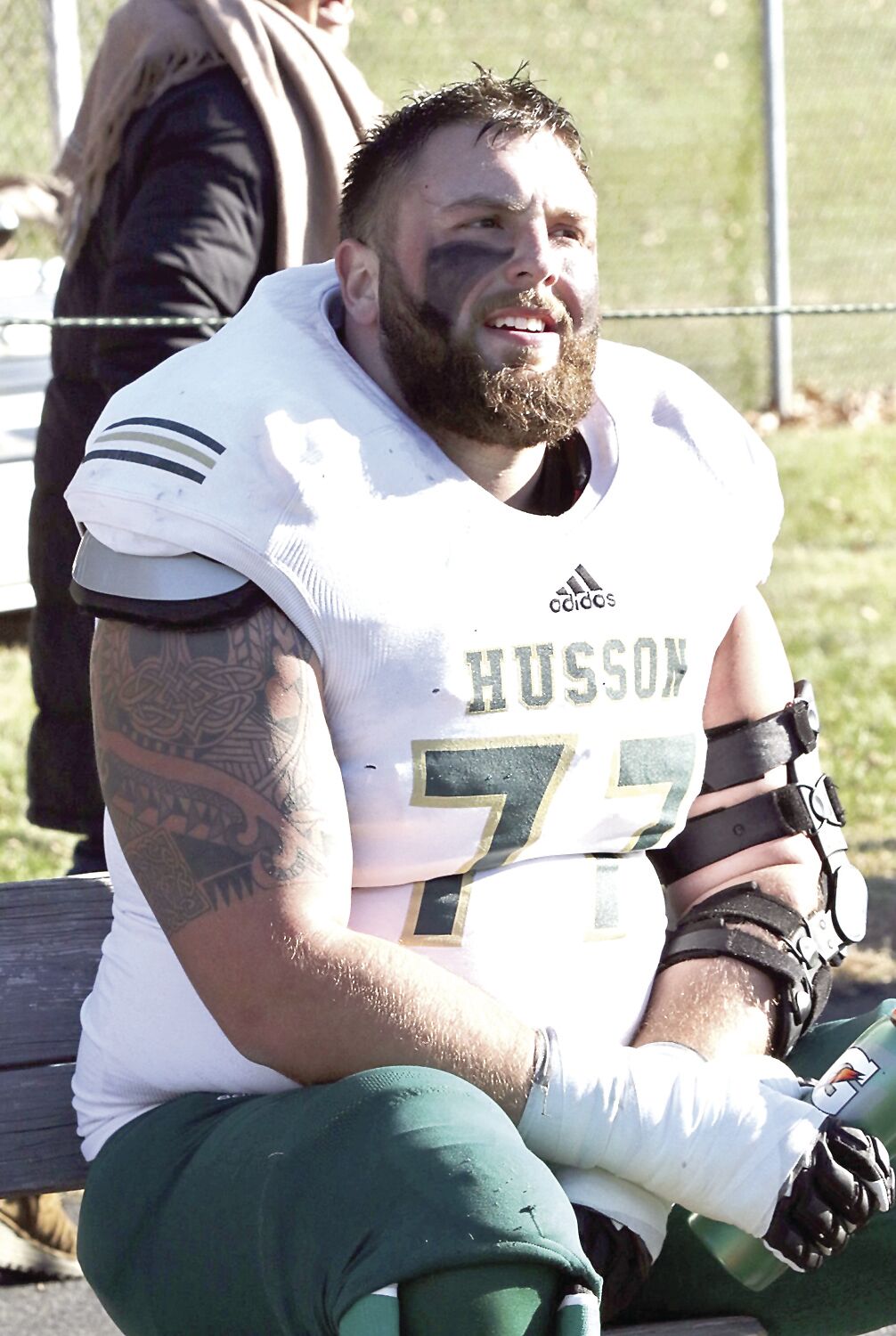 Jacob Cameron would welcome the opportunity to test his skills in the National Football League after his senior year at Husson University. (COURTESY PHOTO)

North Conway’s Jacob Cameron is catching the notice of the National Football League teams. A senior at Husson University, he is ranked among the top 20 offensive linemen in Division III. (COURTESY PHOTO)

Jacob Cameron would welcome the opportunity to test his skills in the National Football League after his senior year at Husson University. (COURTESY PHOTO)

CONWAY — North Conway’s Jacob Cameron is catching the notice of the National Football League teams. A senior at Husson University, he is ranked among the top 20 offensive linemen in Division III.

Jake, who was elected one of three team captains last fall a junior, has been a dominant lineman since his arrival of campus three years ago. Last November, he was one of seven Eagles named to the Commonwealth Coast Conference’s All-Conference Team. It was his third straight All-Conference First Team “nod after anchoring a Husson offensive line that helped the Eagles put 3,577 yards of total offense in 2019.

NFL Draft Diamonds, according to its website, “was created to assist the underdogs playing the sport. We call them diamonds in the rough. My name is Damond Talbot, I have worked extremely hard to help hundreds of small school players over the past several years, and will continue my mission.”

Here is the interview:

• What is the best restaurant in your hometown city?

“Can’t pick just one. Delaney’s Hole In The Wall and Tuckerman’s Tavern.’

• When breaking down your film what will stick out?

“When I watch film I always look for the defensive ends first step and if they tip their first move based on their stance or alignment.”

• If you won the lotto, what is the first thing you would do with the money?

“First thing I would do is pay off my student debt and give back to the ones who have helped me get to where I am today.”

• What has been your biggest failure?

“My biggest failure was not getting the grades I needed in high school to get into college right away. It wasn’t a failure that brought me down, but one that opened my eyes to the bigger picture and allowed me to learn and grow as a person from my mistake of not prioritizing school. It’s given me the ability to talk to younger athletes about the importance of schooling and grades. My biggest failure is also my biggest blessing.”

• What do your teammates say is your best quality?

“I would have to say my passion for the team and making my teammates motivated to get better every day.”

• Who is the hardest working teammate on your team?

“Frank Curran. He plays defensive end and we both began our college careers during the spring of 2017 after both missing 2016 with an injury. We have pushed each other on and off the field since we got to Husson and without him, I would not be the player I am today. Going against him e every day for four years has really brought out the best in my technique as a tackle.”

• Have you ever had a nickname? What is it?

“A lot of my college friends and teammates call me ‘Jcam’ because of my twitter and Instagram handle.”

• What is your degree in, if you do not make it as a football player, what is your dream job?

“I am getting a master’s degree in Criminal Justice Administration with a concentration in National Corporate Security. My dream job would be to work for the National Security Agency (NSA).”

• What is your coolest life moment?

“Winning our universities first ever NCAA playoff game. The feeling when the clock hit zero was indescribable. Seeing the fans and coaches and my teammates full of excitement and happiness was beyond rewarding.”

• What song would you sing at Karaoke night?

• If you could pick any actor to play you in a movie, who are you picking?

• Who is your favorite football team?

• If you had a warning label, what would yours say?

• What is your biggest fear?

• Who is the most underrated player in the NFL?

“Rodger Saffold of the Titans. As a lineman, you appreciate a good one when you see one. He’s a dog. Never been to a pro bowl but been a pro bowl caliber player his whole career.”

• Take us through game day, How do you prepare?

“A light but filling breakfast is key for me because I don’t like eating too close to game time. After breakfast, I drink half a Pedialyte to hydrate. I listen to music and watch some last-minute film on my opponent before I start changing into my uniform. I have always taped my own wrists and can’t break superstitions. Once it’s time to hit the field for pregame I’ve gotten into the focus I need to be ready to play.”

• Do you have any hobbies?

“I have always loved video games. It’s a good way to relax, pass time, and get off my feet during the season or after a good lift.”

• If you had to compare yourself to someone in the NFL, who would that be?

“Tyron Smith. I wear 77 because of him, and I practice my craft based on his film. I watch videos of his pass blocking and run blocking to help work on my abilities. His ability to use finesse to out leverage guys, as well as strength to maul guys off the line is incredible.”

• Who has been the biggest influence on your life and explain why?

“My grandfather. He was the hardest working person I have ever known. No matter what the task at hand was, he attacked it and didn’t give up until it was done. As a kid, it taught me a lot about how to be a man, loyal to my family, and how to be a hard worker. My parents have also always taught me great life lessons that translated into my football career as a teammate and leader.”

• What motivates you to work hard?