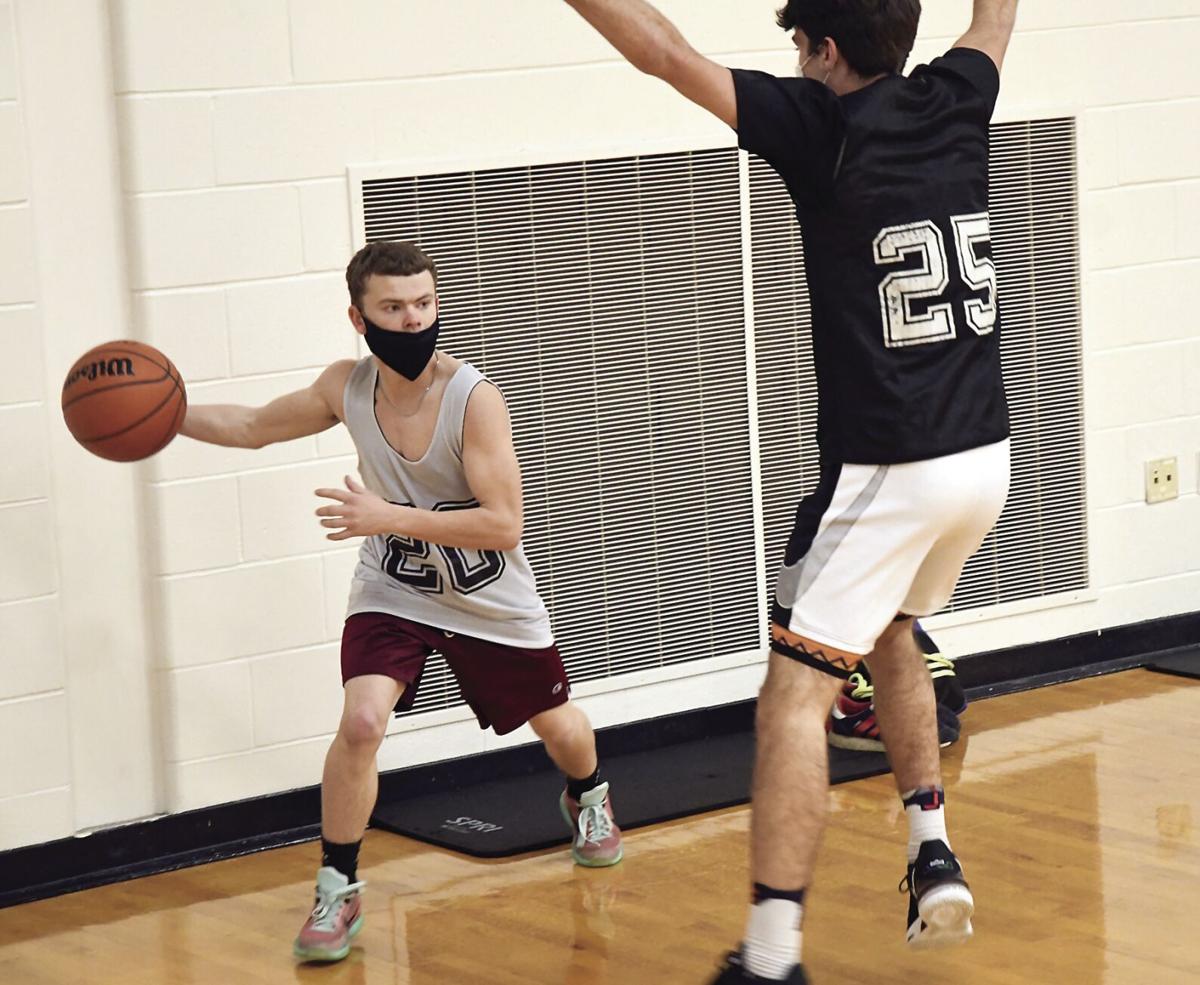 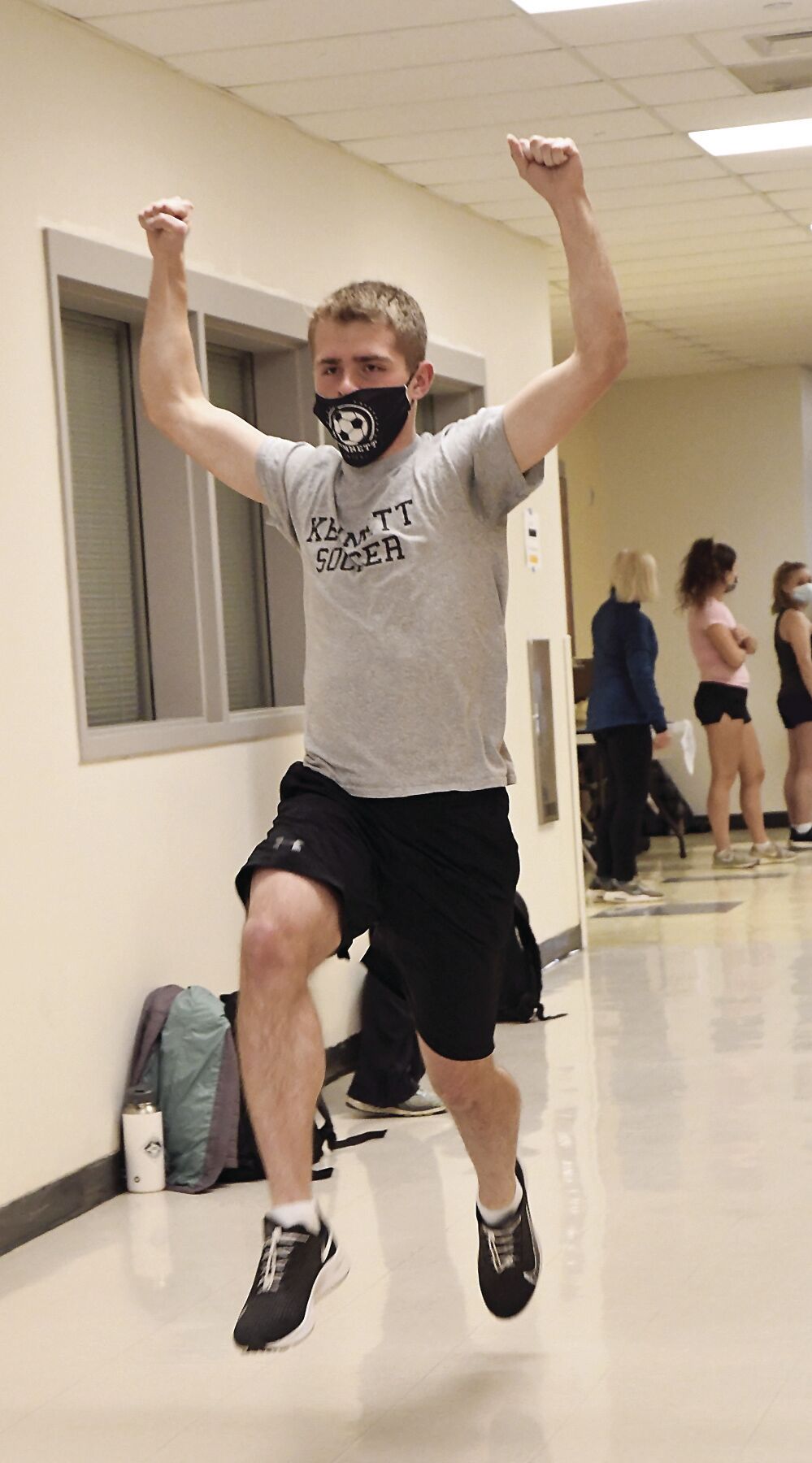 Kennett High senior Bryce Hill takes part in some dynamic core training drills during the first day of indoor track practice for the Eagles last Tuesday. Hill and his teammates worked out in the hallway between the gymnasium and the cafeteria. (LLOYD JONES PHOTO) 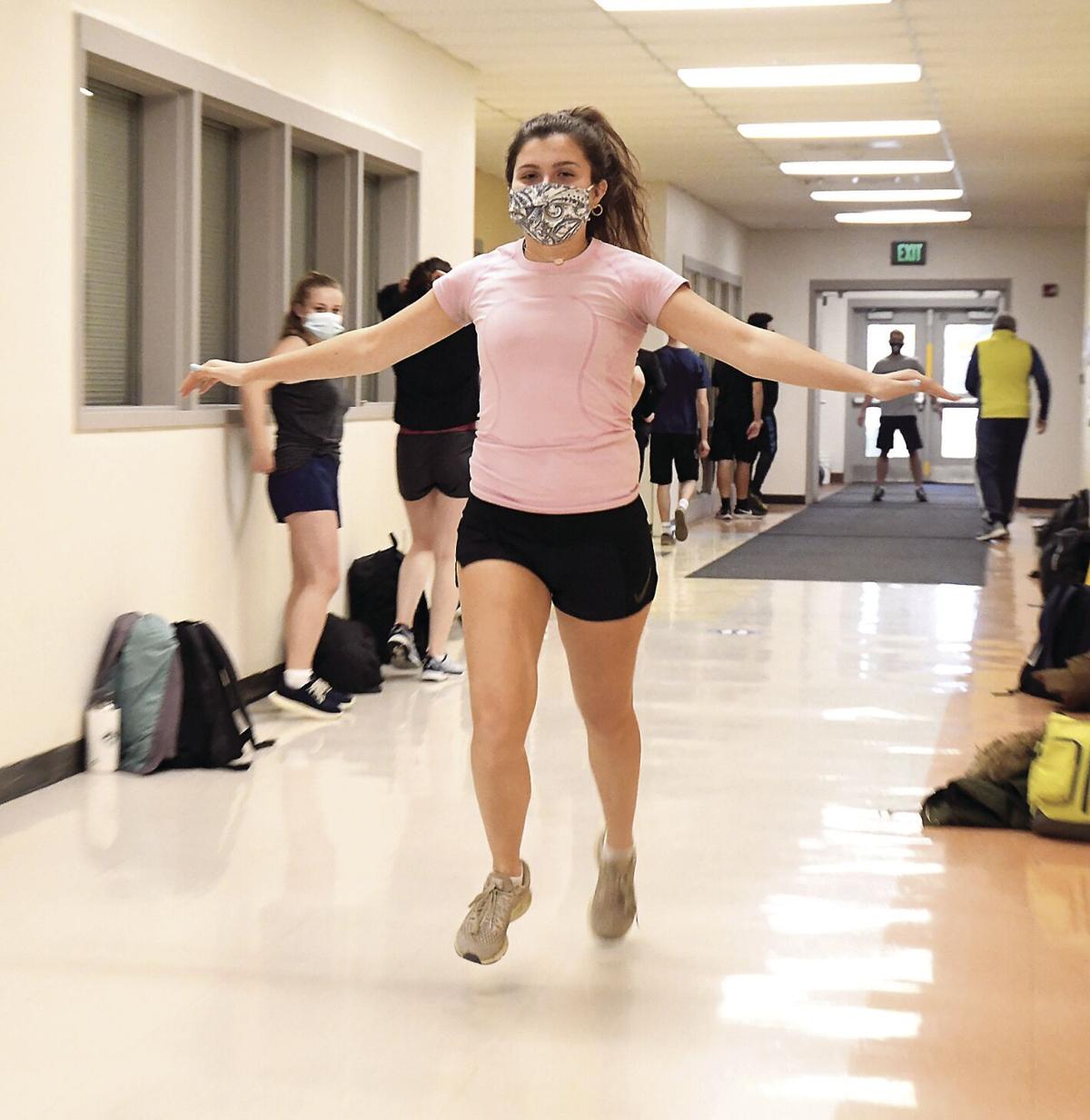 Kennett High senior Livy Curry takes part in some dynamic core training drills during the first day of indoor track practice for the Eagles. Curry and her teammates worked out in the hallway between the gymnasium and the cafeteria. (LLOYD JONES PHOTO) 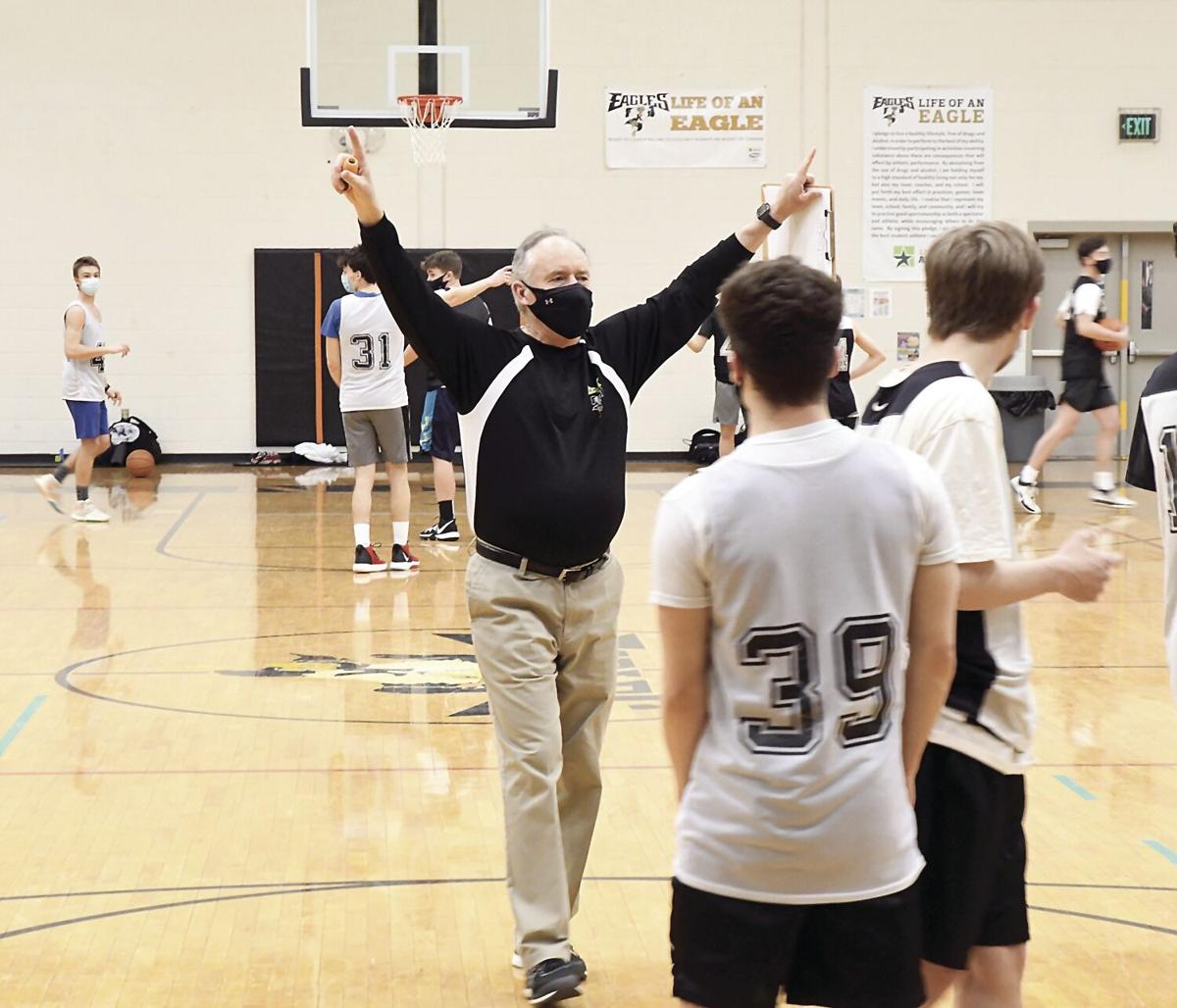 Coach Jack Loynd is happy he and his athletes are able to open the basketball season this winter. (LLOYD JONES PHOTO) 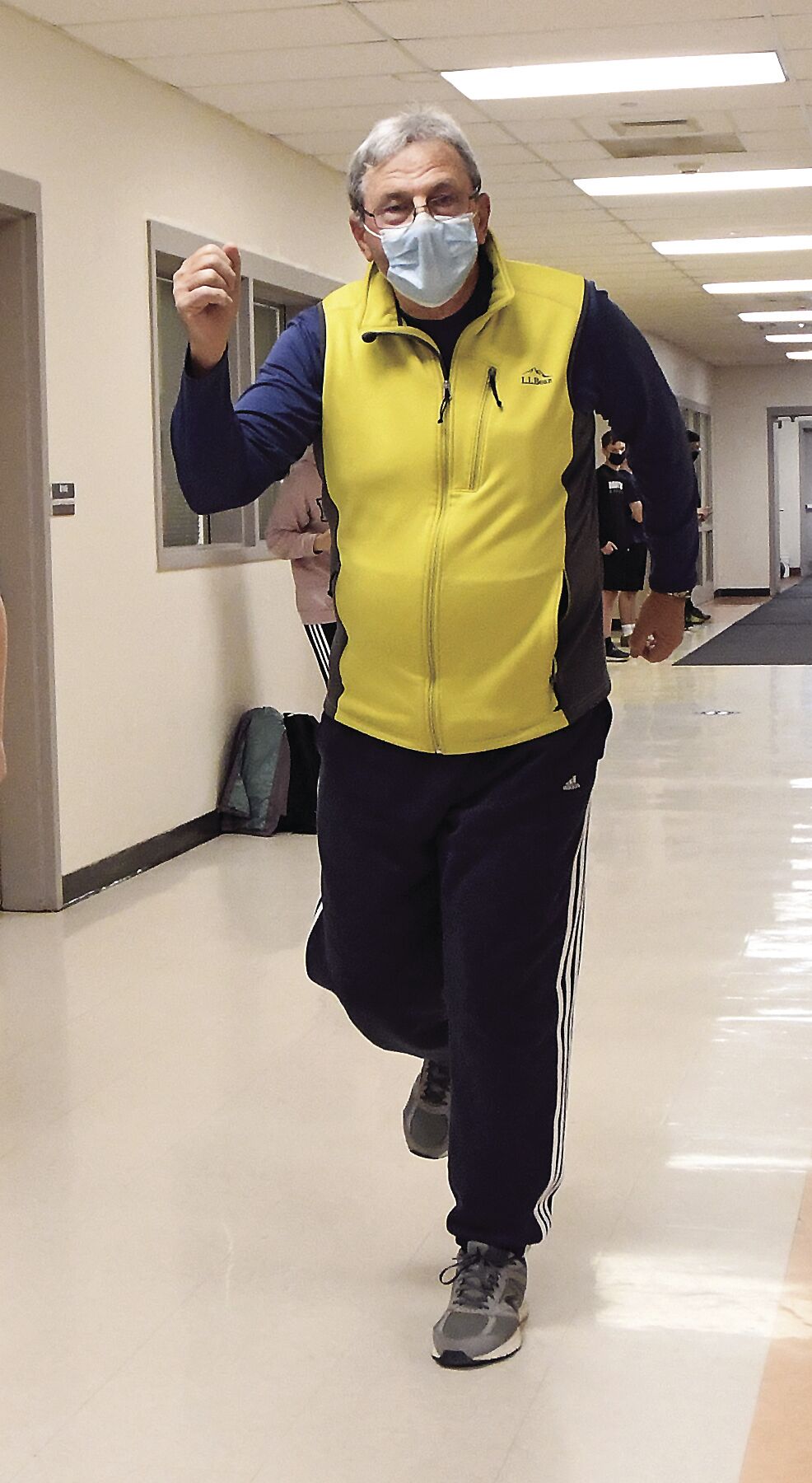 Kennett High senior Bryce Hill takes part in some dynamic core training drills during the first day of indoor track practice for the Eagles last Tuesday. Hill and his teammates worked out in the hallway between the gymnasium and the cafeteria. (LLOYD JONES PHOTO)

Kennett High senior Livy Curry takes part in some dynamic core training drills during the first day of indoor track practice for the Eagles. Curry and her teammates worked out in the hallway between the gymnasium and the cafeteria. (LLOYD JONES PHOTO)

Coach Jack Loynd is happy he and his athletes are able to open the basketball season this winter. (LLOYD JONES PHOTO)

Local sports fans got an early gift this holiday season courtesy of the Conway School Board. Members gave the green light for winter sports at Kennett High and Kennett Middle School to at least begin practicing with a unanimous 7-0 vote on Dec. 14.

Practice started the next day, and while student-athletes and coaches were all masked up, you could see plenty of smiles in the eyes of everyone from on the hardwood of the Peter Ames Gymnasium to the hallways where Coach Bernie Livingston’s indoor track athletes were doing a variety of conditioning drills.

Coach Livingston has 30 boys and girls out for the team this season. While the Eagles will be broken up into two groups of 15 and will train two days a week — one group on Monday and Wednesday, the other on Tuesday and Thursday — it may be a while, or maybe never that the KHS athletes will step onto an indoor track this winter.

Each February, the season culminates with the state championships in the Leverone Field House at Dartmouth College in Hanover.

“It’s looking right now like we won’t have any meets at all,” Livingston said on Dec. 14. “We’re still holding out some hope, but if all we’ve got is practice, we’ll make the most of them.”

Livingston, the dean of coaches at KHS, still has that love of sports and bringing out the best in his athletes, that he had when he started coaching at Kennett 40 years ago. He is just one of those people who get it, and you’re better from having been on one of his teams — cross-country running, indoor track and outdoor track.

He plans to keep things simple and make the most of the hour his athletes are with him four days a week.

“All I want to do is keep them interested, for them to have some fun and keep in shape, for hopefully the outdoor season,” he said, adding, “A lot of kids have nothing to do if there is no practice. Would we like to have meets? Yes, but this is the next best thing and we’ll make the most of it.”

On Tuesday, just outside the cafeteria, Livingston, and Eileen, his wife, the other half of the Dynamic Duo, and fellow assistant coach Kathleen Murdough, put the athletes through their paces with each running three 40-yard dashes for time.

“I don’t care what anyone else does,” he said. “I care about you and are you getting faster? If you ran in the Olympics and came in eighth out of eight but you ran a personal best, that shows me you did the best you could. This is all relative to each individual.”

Just down the hallway in the gymnasium, it was the first day of tryouts for the varsity basketball team. Coach Jack Loynd was delighted to be back on the court.

The Eagles, the No. 7 seeds, advanced to the Elite Eight quarterfinals and were scheduled to play at No. 2 Bow (18-1) on March 13. Sadly, that game was never played as the NHIAA was forced to pull the plug on the season due to the coronavirus.

On March 23, the NHIAA bestowed state runner-up honors to Loynd’s Kennett squad along with five other schools (Oyster River, Hollis-Brookline, Hanover, Pelham and Lebanon). Bow and No. 1 seed ConVal, which had identical 18-1 records, were crowned co-champions.

“Co-champions will be awarded to the highest-seeded team remaining on each side of the NHIAA Tournament bracket. All other teams remaining in the tournament will be awarded runner-up plaques and medals," Director Jeffrey Collins said.

Tuesday, with a lot of new faces behind masks (KHS lost seven seniors to graduation), Loynd put his new troops through their paces. Practices are in 90-minute blocks for the basketball teams with 30 minutes between sessions to thoroughly clean the Peter Ames Gymnasium.

“Gentlemen, we only have 74 minutes left, let’s make it 74 quality minutes,” Loynd said.

Loynd, who teaches statistics and is always regarded as one of the favorite teachers each spring by the outgoing valedictorian and salutatorian, loves to use every opportunity to teach, even on the basketball court. “What’s the capital of Mississippi,” he asks a small cohort of players. “Jackson,” a player responds. Later, the Eagles are asked the capital of California (Sacramento) and Alabama (Montgomery).

Practice featured a couple of drills with athletes not allowed to dribble but had to matriculate the ball down the court by a series of passes and players moving. Athletes also worked on their free-throw shooting at another station and another station had an offensive and defensive player under the basket, whole an offensive player with the ball and a defender opposite him at mid-court. The player with the ball had the option of dribbling to the hoop and taking a shot or making a pass to his teammate under the basket while the defender at mid-court had to sprint to get back into the play on defense.

Safe to say, everyone was pooped after 90 minutes, but all were happy to be back.

“There’s so much excitement among the girls to be able to play,” Larry Meader, varsity girls’ basketball coach, said of the 28 girls out for basketball. “They all just want to be there. They’ve adjusted to mask-wearing. None of us are complaining. We’re all happy to be able to be here.”

Along with the school board’s decision to start winter sports, was the unanimous decision to have board members Dr. Michelle Capozzoli and Randy Davison along with Superintendent Kevin Richard reassess how things are going after two weeks and provided schools are still offering face-to-face learning they will continue through the winter.

KHS Athletic Director Neal Weaver and Athletic Trainer Colby Locke, from Mountain Center Physical Therapy, were both in the gym on Tuesday. There was a little bit of trash talk between the two as they were squaring off in their fantasy football semifinals, but both were happy to see sports return. They were the unsung heroes in pulling off fall sports, and have set up similar protocols and phased-in approaches to the winter season.

Neal and Colby have done such an incredible job making sure that we could safely start,” said Meader. “I have a ton of confidence in them and the protocols we have in place.”

Under the phased-in approach, games would not take place until the second week in January with the Kennett teams playing a regionalized schedule, much like in the fall. The New Hampshire Interscholastic Athletic Association had an open tournament last fall for multiple sports with everyone making the playoffs and initially playing in a regionalized cluster in the opening rounds of post-season play.

“The next step will be winter sports events guidelines which will be finalized over the next couple of weeks for competitions beginning in January,” Weaver said.

Finger’s crossed we continue to take the next steps.