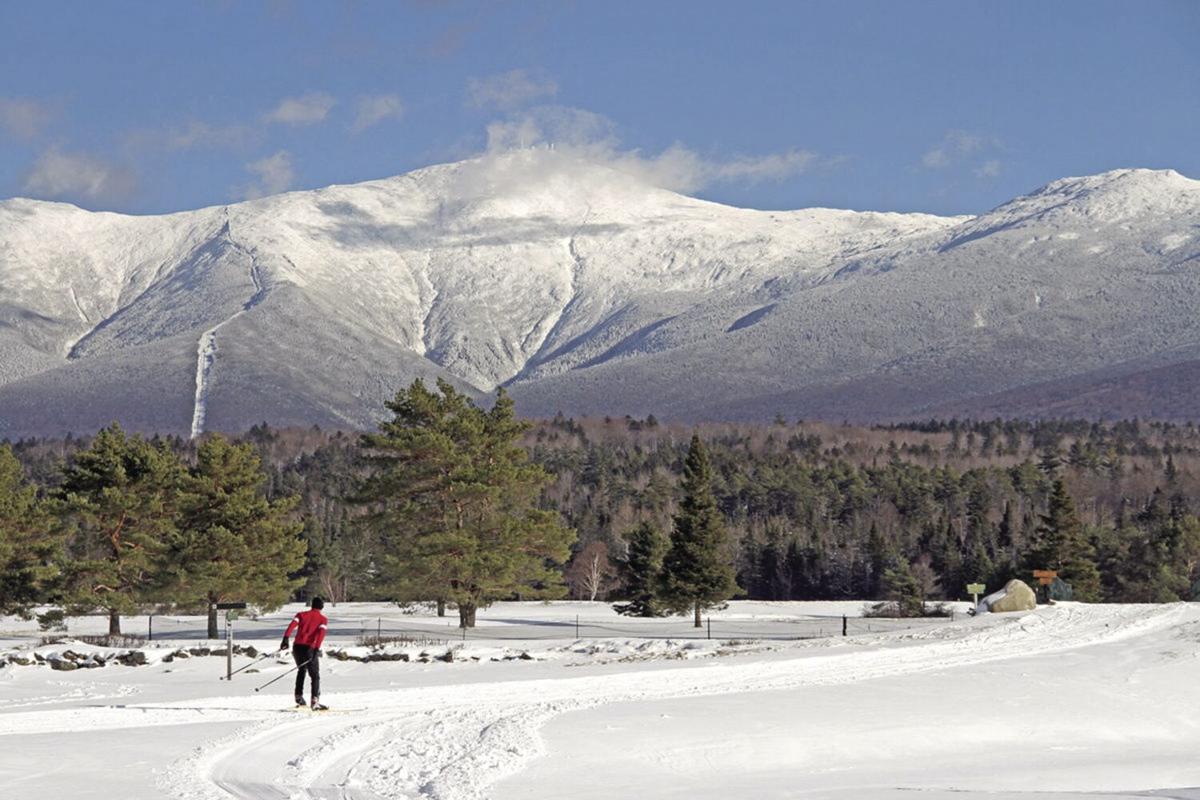 A skate skier at Bretton Woods Nordic Center glides along with Mount Washington in the background. (COURTESY PHOTO) 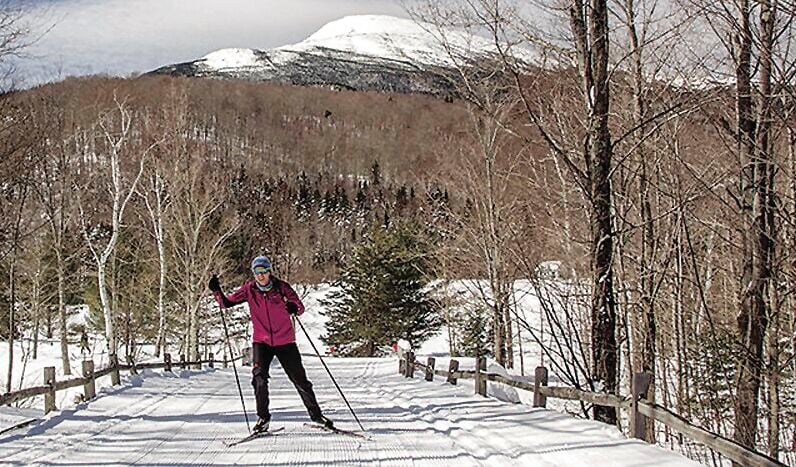 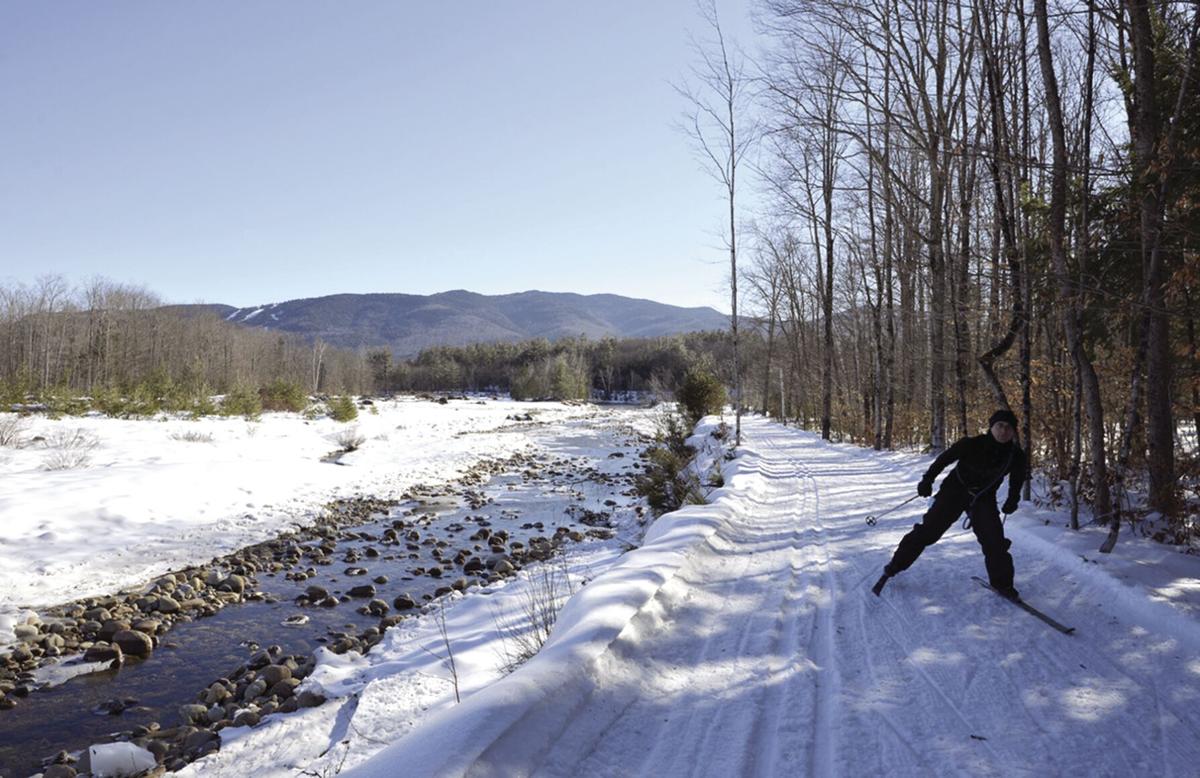 Skating along the Saco River at Bear Notch Ski Touring in Bartlett is scenic and fun. (SALLY MCMURDO PHOTO) 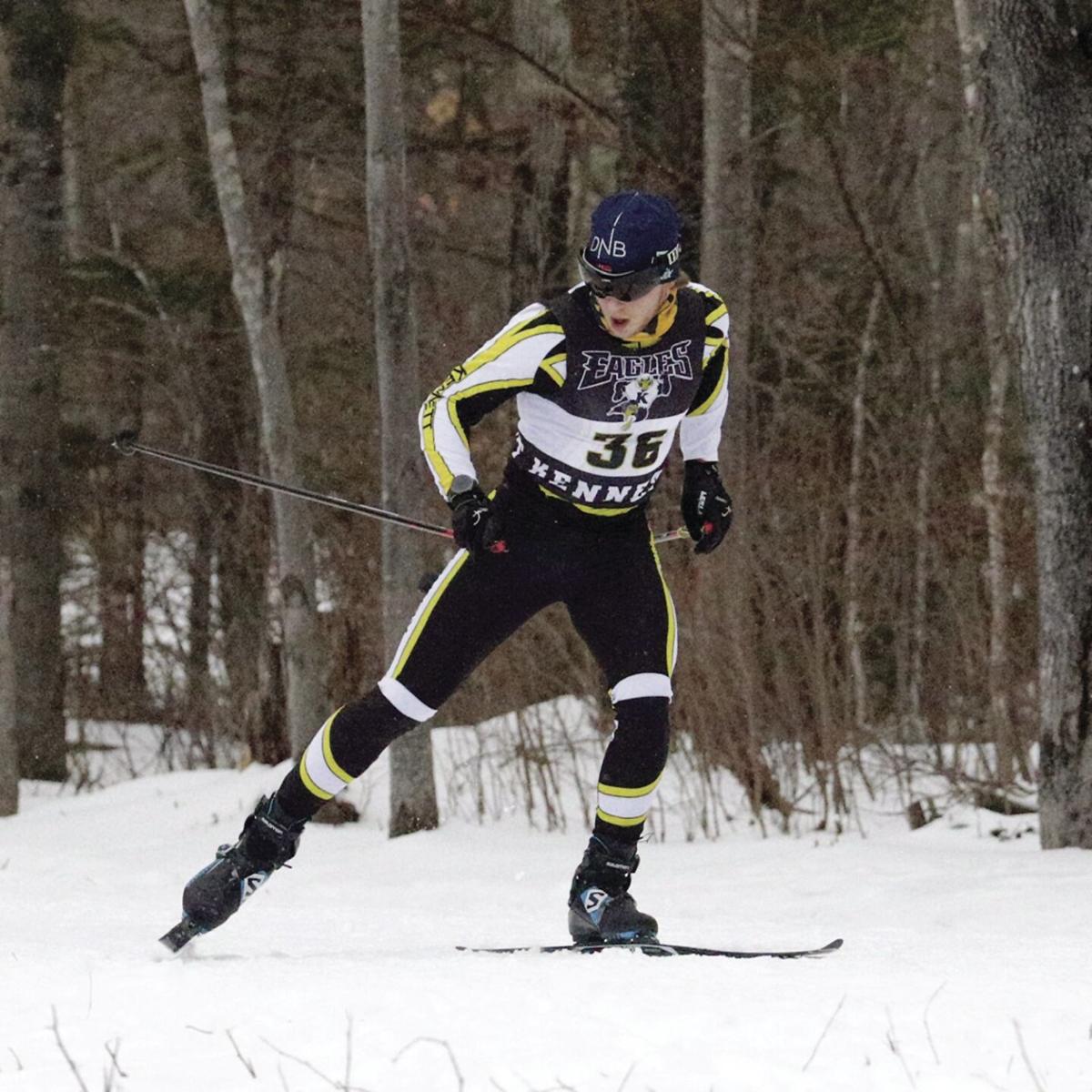 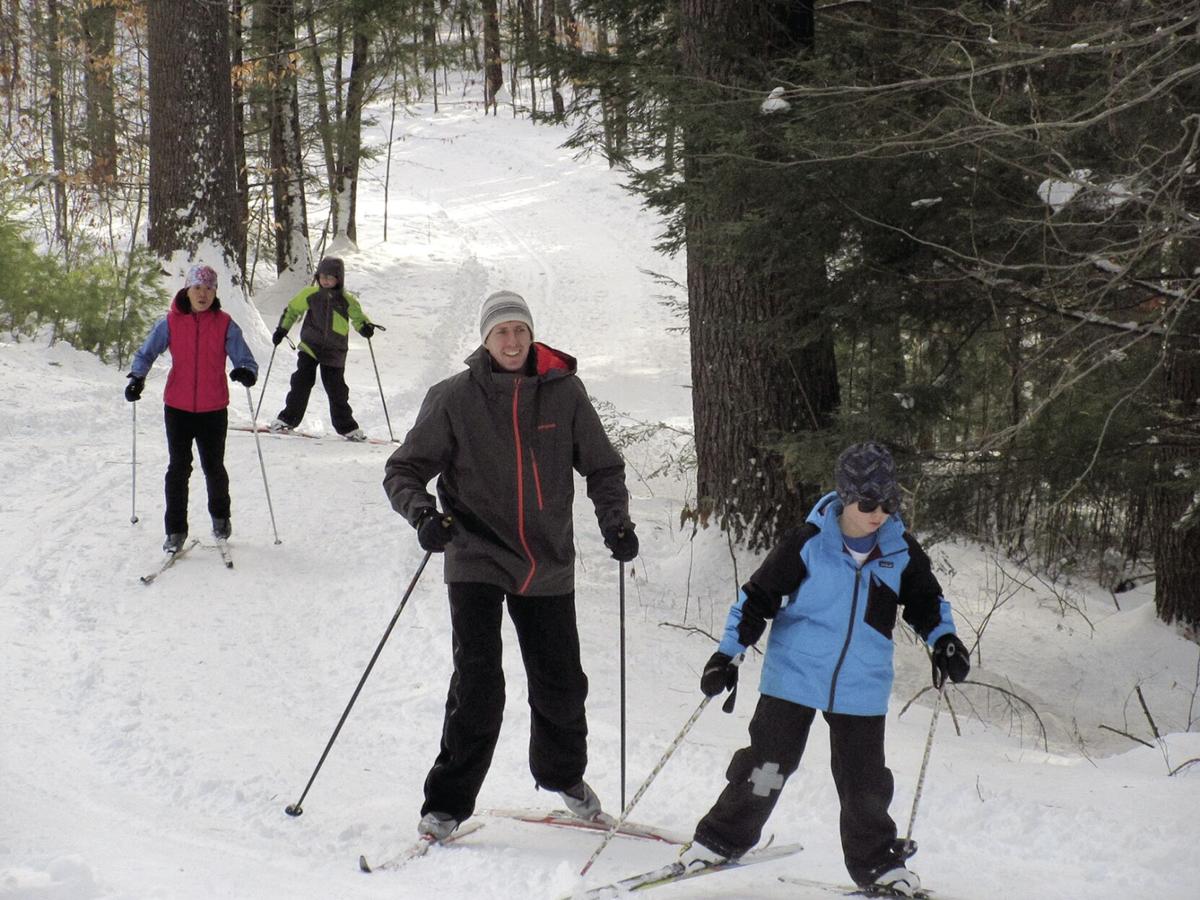 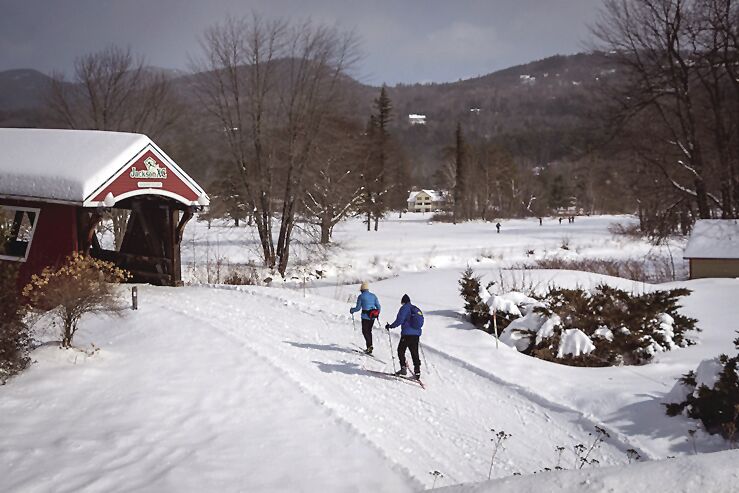 A skate skier at Bretton Woods Nordic Center glides along with Mount Washington in the background. (COURTESY PHOTO)

Skating along the Saco River at Bear Notch Ski Touring in Bartlett is scenic and fun. (SALLY MCMURDO PHOTO)

In the world of Nordic skiing, skate skiing is a relative newcomer, even though it’s been around for 40 years. Classical skiing with its diagonal stride, kick and glide is much older, going back thousands of years. Roland Huntford, in his book, “Two Plans and A Passion,” begins his history 20,000 years ago in the last ice age.

Skate skiing is to classic skiing like snowboarding is to alpine skiing. It’s the “newest thing” on trails. Like snowboarding, skate skiing has enlivened Nordic skiing by giving people something novel to learn. It looks fast and fun, Many older and younger skiers want to try it.

Last Monday, I was reminded of that. I had three lessons booked for the day — a couple in a “learn to skate” lesson, a single beginner for a classic lesson and an afternoon skate lesson with two young children. Every lesson was different, which made for an interesting day.

Beginner classic ski lessons are pretty straight forward. At the end of the lesson, the beginner skier usually has skills in kicking and gliding, using the poles and going up and down small hills. Most have the confidence and techniques to get them around the golf course. Many are ready to go out on beginner trails. At the end of the day, my student was ready to ski with a friend and was asking about purchasing equipment — a Nordic convert!

“Learn to skate ski” lessons are more complicated. The movement patterns don’t come naturally to many skiers. Unlike classic skiing, which mimics the movements of walking, skate skiing is different. Some say it is easier to learn if you’ve ice skated or rollerbladed before. I had done neither and I learned it. It just took time, patience and lots of practice. Thirty years later, I’m still perfecting my technique.

In my first skate lesson, the couple told me they downhill and cross-country ski. They had never skate skied. Like many before them, they had seen skaters zipping by and thought it looked like fun. They wanted to try it, so they bought the lesson/rental package.

At the beginning of a skate lesson, I always let students know it will take them longer to learn this strange new technique. The “learning curve” is steeper. It may take many lessons and lots of hours of practice to understand and perform the technique with any kind of grace. It requires the 3 Ps — patience, persistence and practice.

The hardest thing in a skate lesson is to get students gliding on their skis. I look for skate-friendly terrain, heading slightly downhill, with a good, solid skate platform. Starting without poles, we see if we can make the skis move with just weight transfer, then we add in some pushing off.

Trying different drills, I worked on getting students moving forward on their skis. Later, we added poles to aid movement. In a couple’s lesson, typically, one of them gets it and the other doesn’t. The husband could glide a little, but his wife struggled. At the end of the lesson, I gave them suggestions about skate-friendly terrain to try like Woodchuck Fields and reminded them to be patient.

The children’s lesson was different. I skipped explanations and went right to moving on skis. They had been on skate skis a little and they were very energetic. I kept us moving and threw in games and activities to make it fun while working on different skills. Without poles, we skated in circles and figure-eights. Then we experimented with the “marathon skate” technique and incorporated some poling techniques.

By the end of the lesson, both of them were skating and having fun. It’s true that the younger you learn, the easier it is.

Skate skiing is complicated. There’s a lot going on underfoot and with the skier’s body position and movement. Watch any competent skater and be amazed at how easy he/she makes it look.

You can watch videos and read books about how to skate ski, but it always comes down to understanding how to make the skis move forward. Taking a lesson or signing up for a multi-week clinic are great ways to get help with that understanding. Knowledgeable instructors can help you break down the movements and practice each one separately before you try to put them all together.

What is the history of skate skiing? How did it develop into the “other Nordic ski technique?” How is the movement different? Skate skiing involves moving the skis in a “V” pattern by pushing off the inside edge of one ski and gliding on the other.

According to Roland Huntford in “Two Planks and a Passion,” the skating technique was used by the Swedes and Finns between the wars to “break long-distance records on frozen lakes and rivers” using skis with partial metal edges on the inside to push off ungroomed crusty snow. Ski orienteers used it as a method to ski fast across frozen bogs and forest roads in the early 1960s.

An intermediate step in the skating evolution, the “marathon skate,” was used by cross-country racers on flat racecourse sections. By keeping one ski in the tracks while skating with the other ski out of the track and double poling, racers could go faster.

In the 1970s, Finnish ski orienteer and cross-country racer Pauli Siitonen used the complete skating technique in international long-distance touring races. Bill Koch, an American Nordic skier and future Olympic medalist crossed paths with Siitonen and picked up the technique from him. He then used it to win the World Cup in 1982. Some see Koch as the father of skate skiing, but Siitonen was really the pioneer of what was called the “Siitonen step.”

Thirty years later, the skate technique and equipment have evolved into a specialized form of cross-country skiing. Shorter skis waxed only for glide, special bindings and stiffer boots with ankle support and longer poles complete a skate package. Skiers slide their skis over the snow instead of kicking and gliding and edge skis to move forward and skate up hills.

Poling is mostly double-poling instead of diagonal poling, and terms like V-1, V-2 and V-2 alternate are used to describe the different “gears” of skate poling.

Nordic centers have adapted to this new style of skiing by widening their trails and adding a “skate platform” between the traditional classic tracks. This platform is groomed wide and firm to give the skaters the surface they need to skate efficiently. It also separates faster skate traffic from diagonal striding traffic.

If you’re interested in learning how to skate ski, call one of your local Nordic ski centers. Find out what they offer for lessons and rental equipment. Taking a lesson will get you started on the trail to becoming a skate skier. All you have to do after that is practice, practice, practice!

Have fun on the new snow.