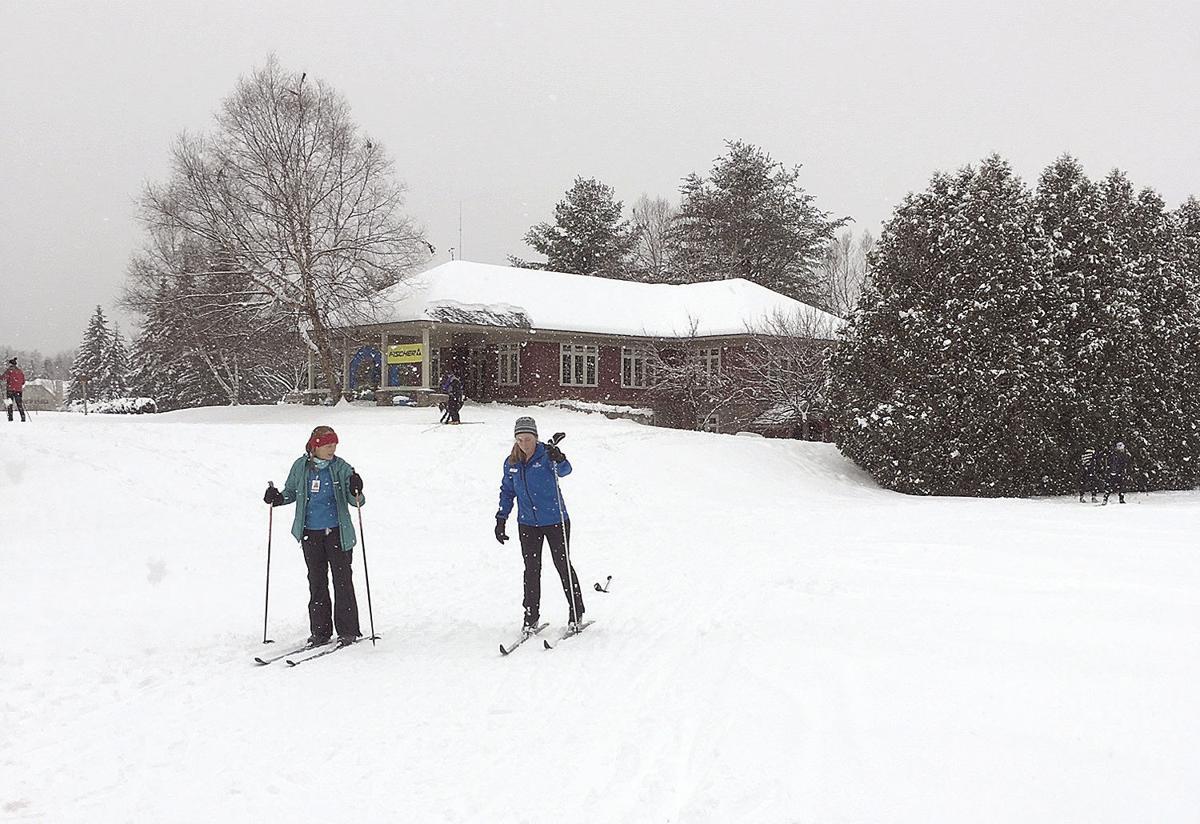 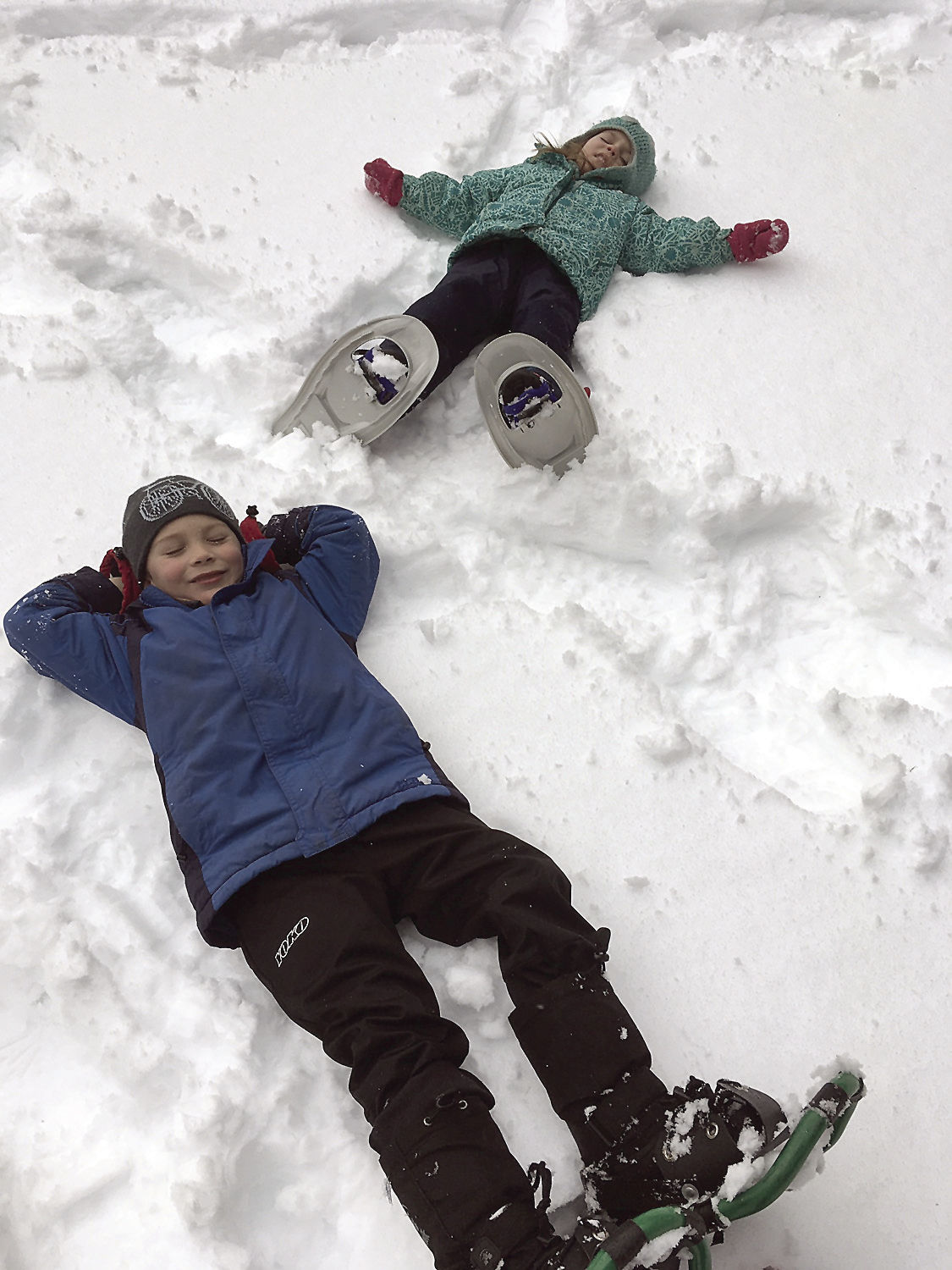 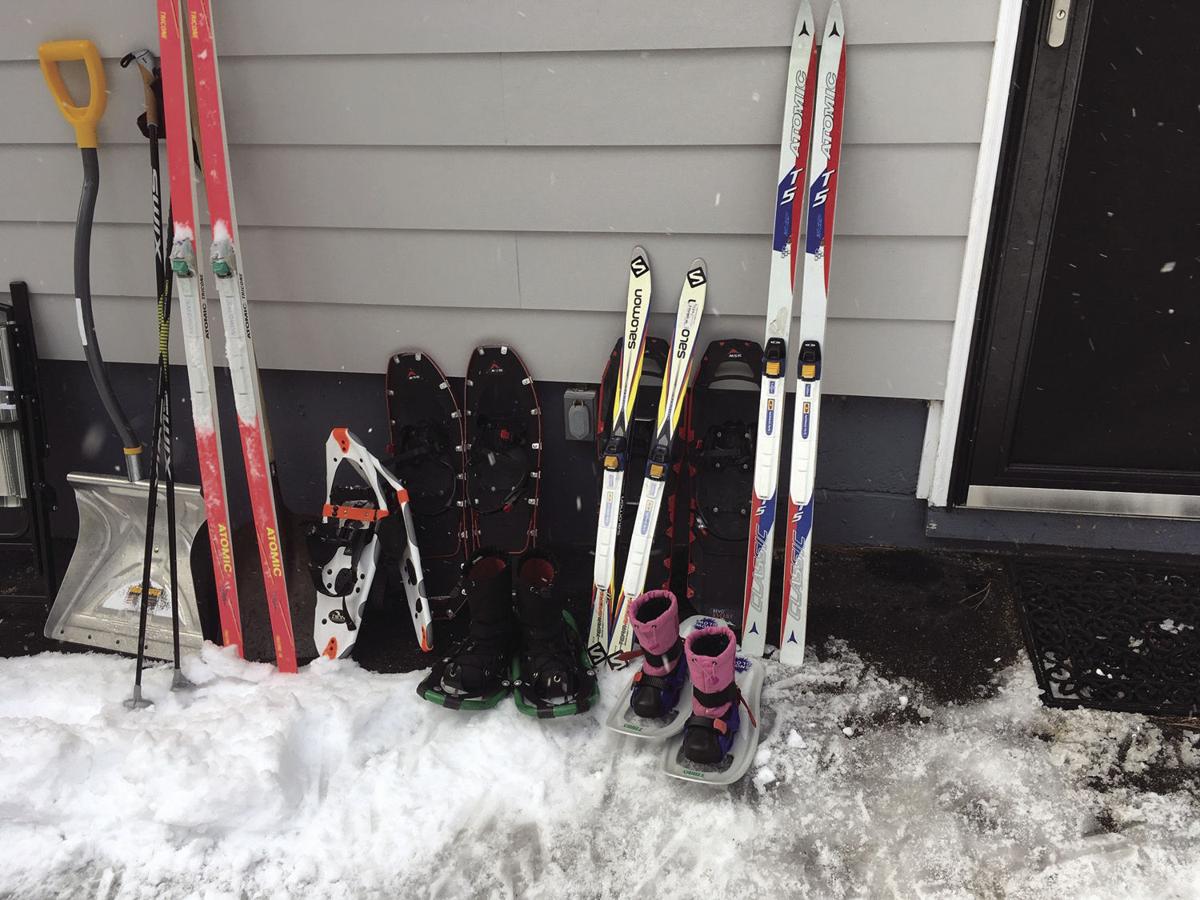 Snow tools and equipment are at the ready for playing and dealing with snow. (SALLY MCMURDO PHOTO) 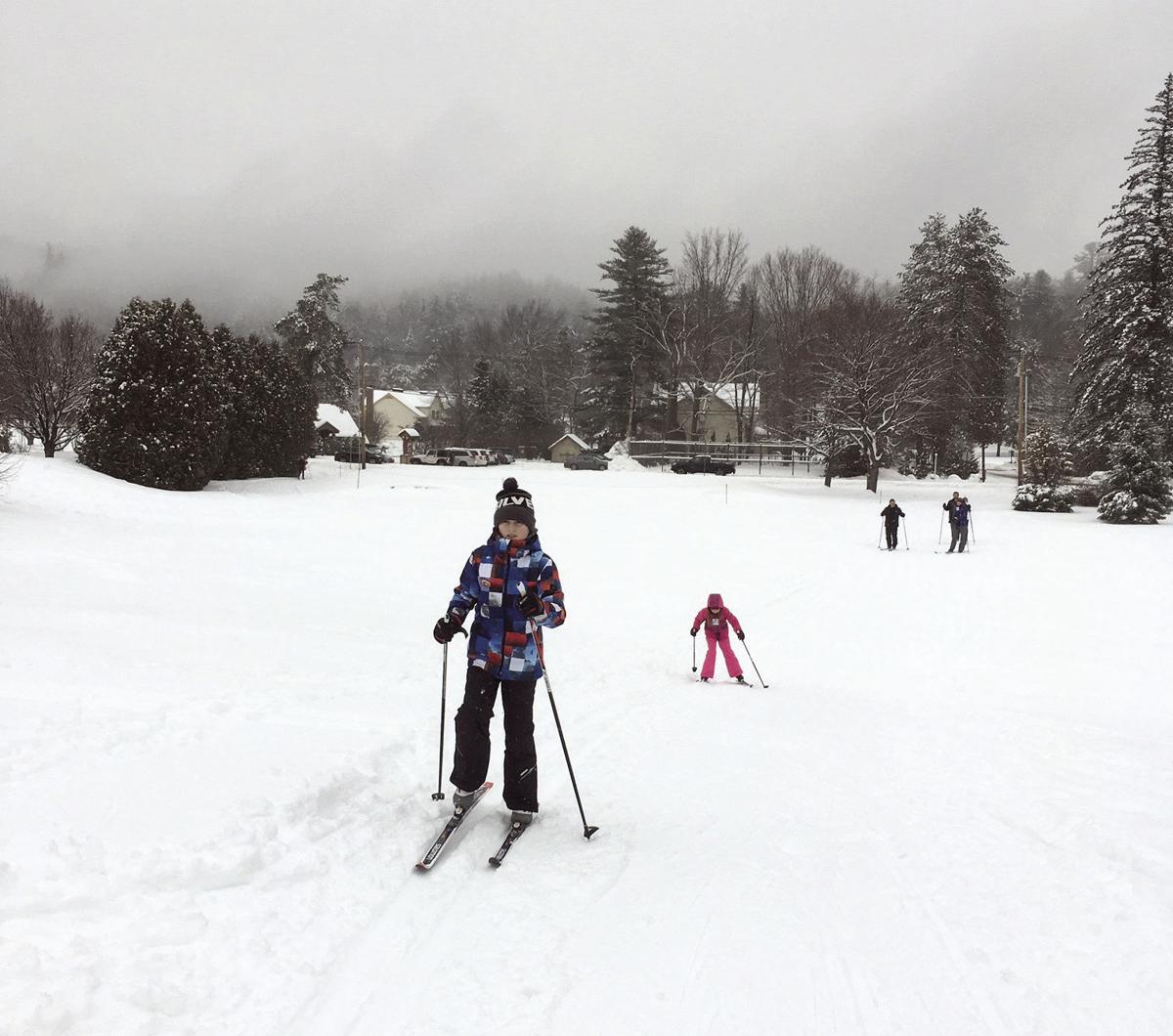 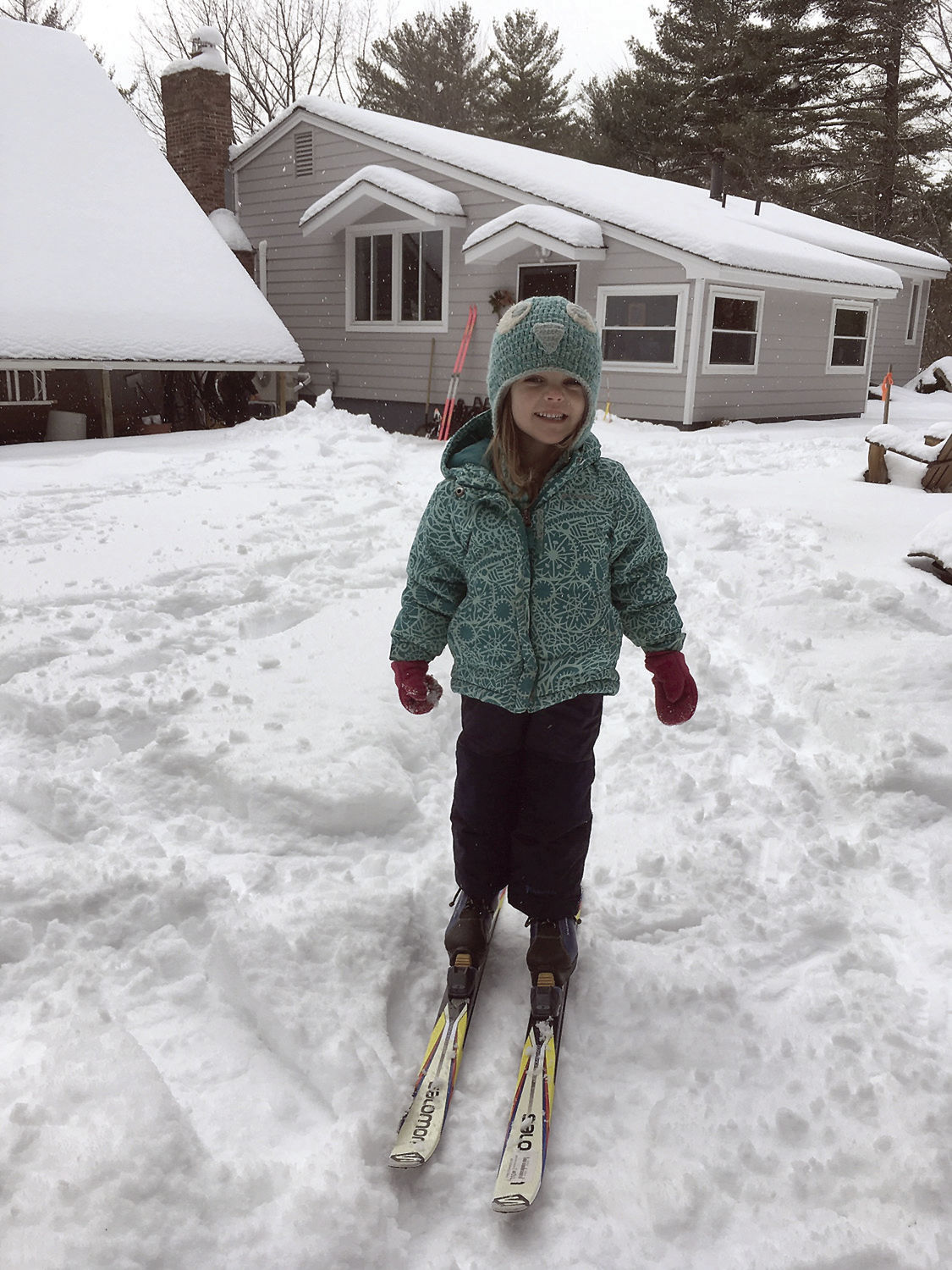 Snow tools and equipment are at the ready for playing and dealing with snow. (SALLY MCMURDO PHOTO)

Most Nordic centers were closed last Sunday because of a lack of snow.

Those that were open had marginal conditions. During Christmas vacation week, local and visiting cross-country skiers were frustrated by “brown” ground. That all changed when it snowed Monday.

Frowns became smiles as the snow came down and covered the ski trails. Suddenly, there was a flurry of activity at Nordic centers as everyone got out of their skis and snowshoes.

Working at Jackson on Tuesday, I found it very busy. People came in steadily to rent equipment, sign up for lessons, get trail passes and take snowshoe tours. Everyone was anxious to get out on the snow! Families, relatives and friends showed up to have fun in the snow. Babies were tucked into packs and pulks, toddlers tried out their “boot” skis and junior skiers skied with their parents and grandparents. Families signed up for lessons. Snowshoers of all ages were seen tromping through the woods. Being out on snow was so much fun.

As I skied out the Ellis for the first time this year, I remembered why it’s a privilege to live or visit the White Mountains in winter. Snow-covered trees and icy rivers created that “winter wonderland” experience. The feel of skis gliding over snow and fresh air in my lungs rejuvenated me after the long, dark days of December. Skiing with a friend and watching her smile as she skied, made it even better.

New Year’s Eve, the grandkids stayed overnight. It’s always a treat to have them over, but it was even more fun the next morning to greet the new year with them. We said, “Rabbit, rabbit” and wished each other, “Happy New Year!” Blueberry pancakes made with grandkid help were gobbled down with maple syrup.

As the sun warmed things up, we got ready for snow play. I forget how much work it is getting children ready to go outside. Mittens, hats, coats, snow pants, warm socks and boots had to be located and put on. Since Iver and Juliet had both snowshoes and skis, we started with winter boots attached to snowshoes. Grampa’s idea was to have them pack down the trails around the yard. Once packed down, we could use them for skiing, too.

My husband gave me new racing snowshoes for Christmas. I hurried outside to try them in the snow. Six-year-old Iver ran in his snowshoes, too, while 3-year-old Juliet took a more cautious approach. New to snowshoeing, she had to figure out how to not step on her snowshoes and how to get up when she fell down. She learned quickly, with Grandma nearby to lend a hand.

The snowshoeing troop packed trails to the compost, cover-it and garage. Grampa led us to the bird feeder bush so we could pack that, too. Juncos scattered in all directions. Juliet exclaimed, “Grandma, look at all the birds!” She pointed to tracks in the snow and wondered who made them — deer, moose or bird? My guess by the size and pattern was small rodents or squirrels. Snowshoeing with kids is a great way to get them out exploring nature and learning about the animals.

Iver made figure-eights and heart patterns in snow and wrote his name in snowshoe tracks. Juliet and I followed. The kids and I tromped down the hill. On the way back up the hill, someone decided to throw snowballs (not me!). We had fun trying to gently hit our targets, below the head, of course.

Trails packed down, we switched gear to cross-country skis. Both kids had new, fast skis to try. Iver flew across the snow, an old-hand at skiing since he was 2. Juliet had just graduated from boot skis, so this was her first time on skis that glide. After a few tentative strides, she started to get the hang of it. Grandma helped her up when she fell, but she kept on going. We went around the backyard and even up and down the hill. Her brother tried skiing down the hill in deep, crusty snow. He made herringbone tracks on his way back up. I pointed out to him how they looked like “fish bones.” He’s an avid fisherman, so he could see right away what I meant.

Before everyone got too tired, we took a break for lunch. Grampa made lunch, while I undressed the kids. Off came skis, boots, mittens, hats, coats, etc. Wet things went into a pile to put by the woodstove to dry. After peanut butter and jelly and grilled cheese sandwiches for kids and soup for us, Grampa rested and I entertained the kids with music videos of their favorite songs — “Peanut Butter and Jelly,” “The Corner Grocery Store” and “Down by the Bay.”

The afternoon wound down and it was time to pack up everyone and everything and take them home. With school the next day, they needed to be home in time for dinner and baths. After a day of playing in the snow, they needed sustenance and rest. So did Grampa and me!

It doesn’t take much to have fun on snow with kids. All you need is enough snow, warm and dry clothing, maybe snow equipment like skis, sleds and snowshoes and a place to play. Our yard isn’t big, but it was big enough for snow play. We didn’t have to drive anywhere and could come in whenever we got tired, hungry, or wet and cold. The children’s willingness and imagination were all we needed. They were game and so were we.

Next time, given the right conditions, we may go farther afield, either to Whitaker Woods, Bear Notch or Jackson to try more skiing. All of them have good beginner terrain, with a place to warm up nearby. If snacks aren’t readily available, we’ll pack our own because we know young skiers get hungry.

While we have this nice white snow, get your kids and grandkids out to play in the snow and enjoy the wonders of winter. Have a great new year experiencing the Nordic landscape.