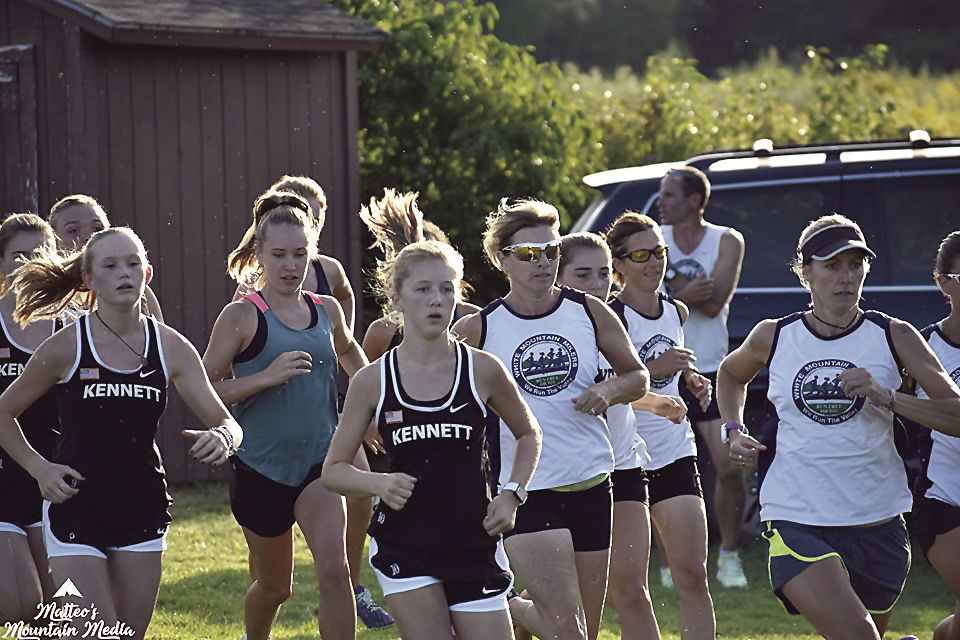 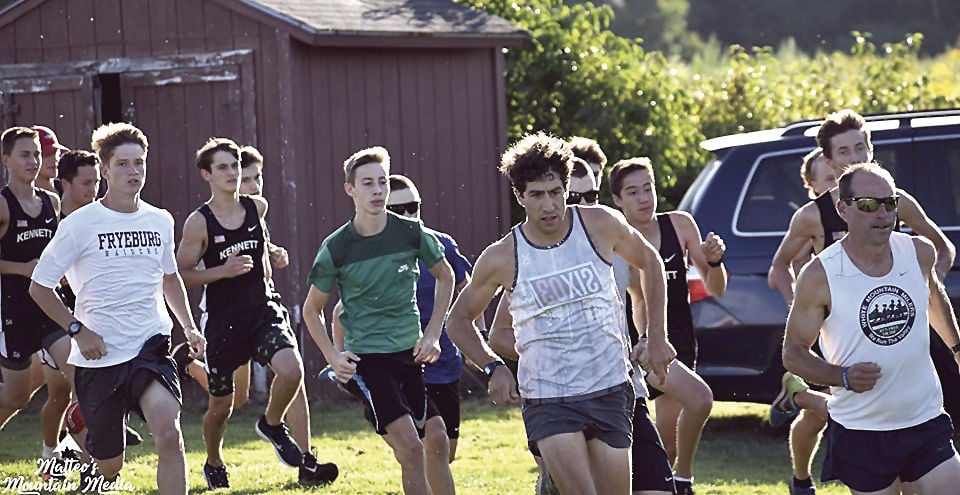 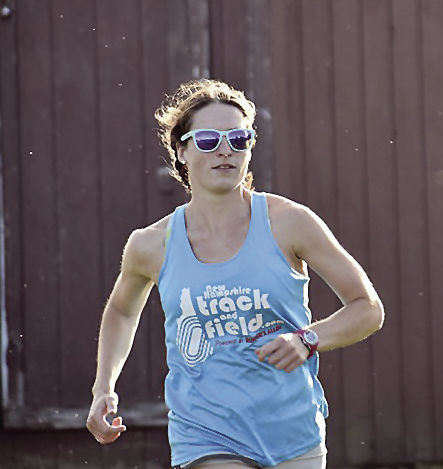 Take the kids to Story Land on Monday, Sept. 2 for the annual Labor Day Believe in Books Literacy Foundation Fun Run. The race starts at 9 a.m. and some of the Story Land characters will be there.

All funds raised from the Fun Run will go directly towards Believe in Books Literacy Foundation's Book Bag Program. All participants receive a race medal, T-shirt and a pass to Story Land to be used that day.

Registration is $10/child and begins at 8:15 on Race Day. More information at believeinbooks.org.

Coach Bernie Livingston sent this note regarding the Kennett Challenge of Tuesday: “We would like to thank the WMM for once again providing all the sandwiches for our meet yesterday. A special shout out to Tim Livingston for setting up the course and helping to provide the awards afterward and to the KHS parents for all the outstanding desserts. It was so enjoyable to see the young and the less young competing together and socializing afterward.”

It was a great turnout for this annual event which had to be canceled last year because of record heatwave. This year the weather was perfect. Men’s and women’s teams from Kennett, Fryeburg Academy and White Mountain Milers vied for the coveted Bernie Livingston Golden Shoe Award.

I think if the kids had known this and chocolate bars were the prizes they would have run faster. As it was, the Milers took top honors for both the men and women this year and everyone was excited to meet our newest member and Kennett Middle School teacher Corey Dowe. Corey also managed to break the course record finishing in 11:29 (previously held by Emily Carty of Fryeburg Academy and set in 2017) for the two-mile course.

Tristan Williams took the win for the men in 10:39.

First place female for Kennett was Amy Burton in 13:25 and first place for Fryeburg was Alanna Nataluk in 13:38.

Chris Desmaris was the top Kennett runner in the men’s field in 10:49 and first place for Fryeburg went to Liam Friberg in 11:58.

In a testament to great coaching, Bill Reilly of Fryeburg and Bernie Livingston of Conway realized that between the two of them, they have been coaching for 71 years. Think of the young lives these two men have influenced in our community. Also, Eileen Livingston has been coaching right alongside Bernie. Their son, Tim, and his wife, Kim, have also been coaching the middle school teams, and their daughter, Terry, coaches in Madison.

Bill Reilly started my coaching track and field and cross-country at the middle school in Fryeburg which I did for about seven years.

Please be sure to thank your coaches in whatever sport you play. Some are paid, some are not, but they all give their heart and soul to you and your sport.

Coach Bernie Livingston still has room for team members for the new Millen 4x400 relay to be held at the Livingston Oval during halftime of the first Kennett High School home football game. The date is Friday, Sept. 13, at around 7:45 p.m.

Tim Livingston says, “If you’re worried about everyone watching you, you’re right, they will be!”

Terry Ballou is putting the teams together for even pacing, so get your name in now. The coveted Millen Cup is at stake, and I’ve heard talk about runners trying out spikes for the first time in years or the first time ever, how to practice on baton handoffs and running under the lights. This should be a lot of fun to watch. If you have any questions and want to join a team, contact Terry Ballou at therese.ballou@gmail.com.

It’s an end of an era. The Cranmore Family Fitness will be closed as you read this column. There will be tennis through the winter, but no more yoga, fitness machines, spinning, pilates, TRX, classes of any kind. I’ve been a member of the club off and on through the years. I’ve been to Celebrations of Life at the club, attended Miler meetings there, ran the turkey trot from there, saw a live turkey raffled off at the race, witnessed a royal wedding on TV while logging some miles on a treadmill, met some wonderful people who became friends and worked out with my daughters at the club. Cranmore Family Fitness was more than a gym, it was a community and will be missed.

However, the new Core Community Fitness is looking to open in mid-September and hopes to fill the void left by Cranmore’s closing. The new gym is still looking for help with moving equipment into the new space. The new gym will be on East Conway Road, behind Pete’s Restaurant Equipment. Check out the Facebook page to join the club and contact them to offer your help.

The White Mountain Milers Trash Queen Catherine Kyle has proclaimed Wednesday, Sept. 11 as the next trash pick up day on the Milers adopted roadway. Meet in the First Bridge parking lot for your assignment and to pick up trash bags and gloves. Breakfast at Stairway Cafe to follow. Also, Queen Catherine states she is “ready to become Queen Emeritus,” and her throne and crown, perfect for a new king or queen, are up for grabs. Please think about taking on this project.

“Running cross-country is the closest man will ever get to flying.” — Joseph Vanderstel

All of the events listed are for runners and walkers. See more events at whitemountainmilers.com and sign up early for extra savings on many races.

• Saturday, Sept. 28: the second annual Be the One Trail Running Festival, Littleton, runreg.com.

Donna Cormier is a licensed massage therapist, avid runner, and walker, cyclist, hiker, paddleboarder, and skier, with an office at 50 Seavey Street, in North Conway. For more running information, ideas, contributions, race reviews and results, reach Donna at dmcorm21@gmail.com See you on the run.