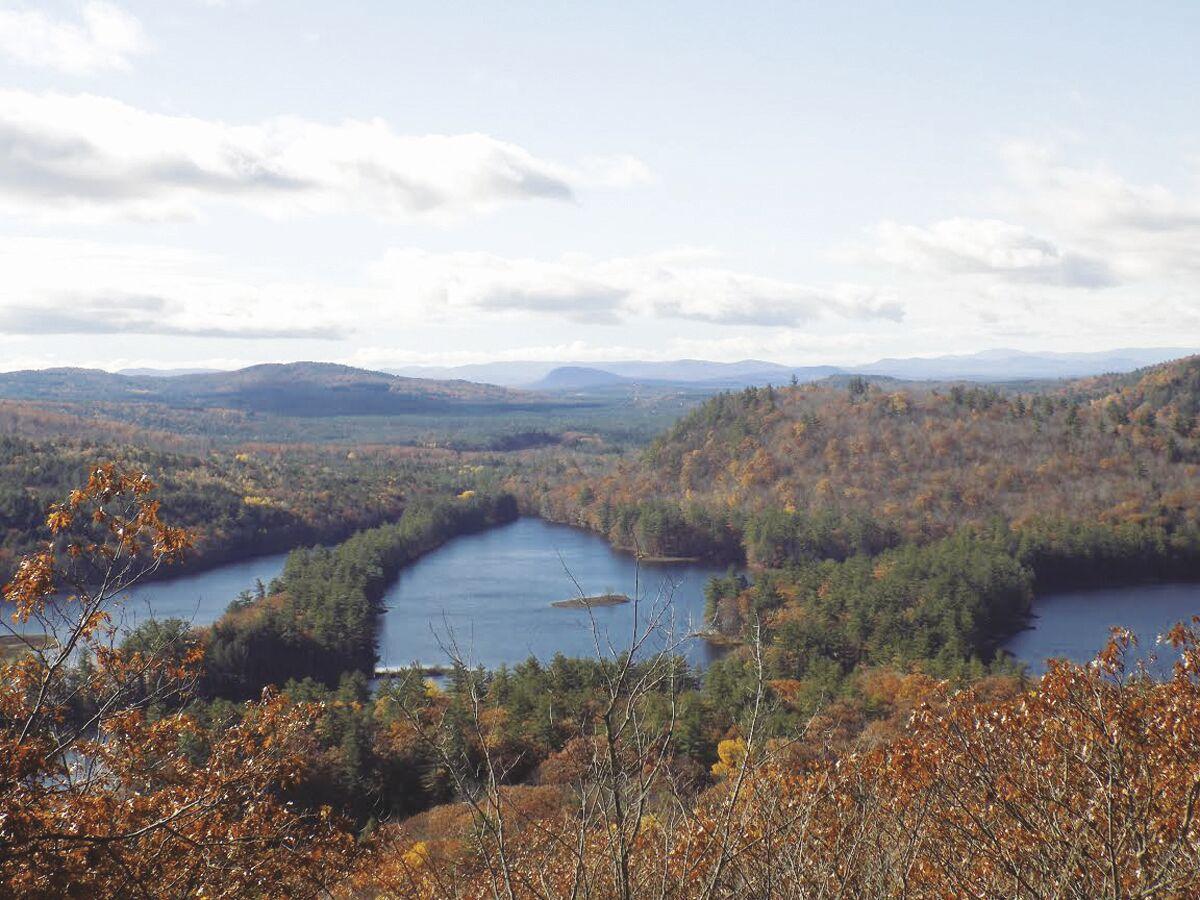 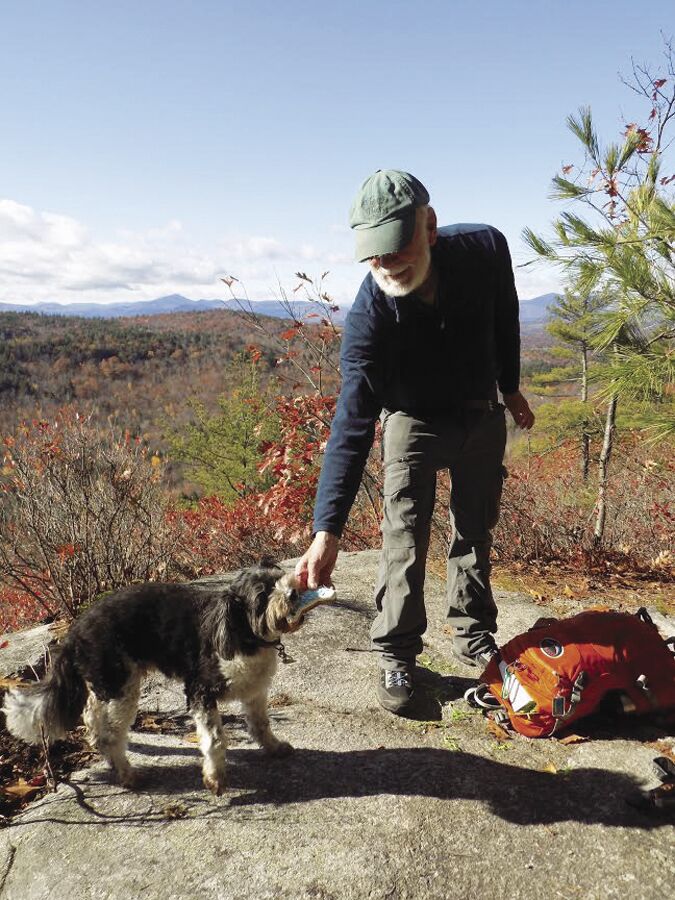 On a beautiful Tuesday this week, I joined Conway artist Bob Gordon and his Tibetan terrier Champney on a hike. It was a special hike as it was Champney’s 14th birthday. Gordon brought along a gift for Champney, to be presented at the summit. Champney had hiked his whole life with Gordon, completing the New Hampshire 4,000-footers at least three times and some of them more. Lately he has done some of the 52 With a View list with his master.

Our hike this week was special too. It was located in Waterford, Maine in the relatively new Five Kezar Ponds Reserve owned by the Greater Lovell Land Trust. It was suggested to me by the GLLT director Erika Rowland, whom I had met at the trailhead for Lovell, Maine’s Mount Sabbattus a month before.

This dynamic trio in Gordon’s car — with Champney between us looking ahead at the road — drove 37.9 miles from Conway to the trailhead. We drove out Route 5 from Fryeburg all the way to the famous road sign in Waterford with Maine towns named after European cities and countries.

From there, we continued straight on Route 35. The road bore right, and soon we took a right at a fork up to Melby’s Store on the left. Directly across from it we took the Five Kezars Road and in another few miles a right on Kezar’s Ridge Road, and then patiently drove on this dirt road until we saw a Great Lovell Land Trust trailhead sign on the right and driveway up to a parking lot for the .08 mile Mountain Trail. This trail rose up to the ledges at the high point of the reserve.

After a long drive, it was great to get out on a trail. The trail was well marked with blazes, which was good as the ground was pretty much covered with copper oak and beech leaves. Soon we could see one of the modest-sized Kezar ponds below through the leafless trees behind us.

The question arose between us: Who was Kezar? It is a name used frequently in the area, especially for the long Kezar Lake to the west. Later, the Greater Lovell Land Trust land steward, Rhyan Paquereau, told me that it was named for George Ebenezer Kezar, a trapper in the 1780s.

Soon, we reached a junction for a half-mile spur to the right called Tom’s Path. It went out to a lookout overlooking four of the small Kezar ponds and an amazing view south. Along the way we met five women coming our way. They greeted us, and of course, Champney.

They were led by the Greater Lovell Land Trust Education Director Leigh Macmillen Hayes. They were on a traditional “Tuesday Tromp.” The land trust has many volunteers called docents, who go along to help on guided hikes. On Tuesdays, Hayes leads docents on a naturalist hike to familiarize them with the properties. In the winter these hikes are changed to the Tuesday Trackers, when everyone is invited to learn about animal tracks.

We arrived at the great lookout at the end of Tom’s Path. It was above a steep drop-off, and mica littered the ground. The two largest Kezar ponds were below, and a long view south. The ponds are unusually shaped. I told Gordon that if he painted them, people wouldn’t believe it. He agreed.

Back on the trail, we wound up to the high point of the hike and met the group of women again at an elevated lookout ledge. We waited for them to descend before climbing up it, respecting social distancing. It had a dramatic southern view that extended east to west.

It was time for the birthday celebration. Gordon had brought along a treat from North Conway’s “Four Your Paws Only.” It was a big “chicken flavored grain free bone” with melted yogurt frosting, and had Happy Birthday written in frosting on it. We wished Champney a happy birthday, and Gordon gave it to him. He didn’t expect Champney to eat the whole thing, but in a couple minutes it was gone. We lingered a while at this great spot.

From there, we took the 0.9-mile Orange Trail down the west side, following orange blazes. We soon caught up with the group. While we were discussing the land trust activities with Hayes, a barred owl flew up 20 feet from us and lit in a tree, a guaranteed way to stop conversation and take photos.

The last part of the trail was called Ron’s Loop, a 0.85-mile self-guided nature trail. We chose to cross a small footbridge and take the right-hand part of the loop, which was on high ground and not wet. In a quarter-mile, we reached the road and had a pleasant walk back to the cars.

On the way home, we masked-up and got coffee at the Center Lovell Store. I got Gordon addicted to this ritual after a hike, but he didn’t seem to mind. Champney was asleep in the back seat.