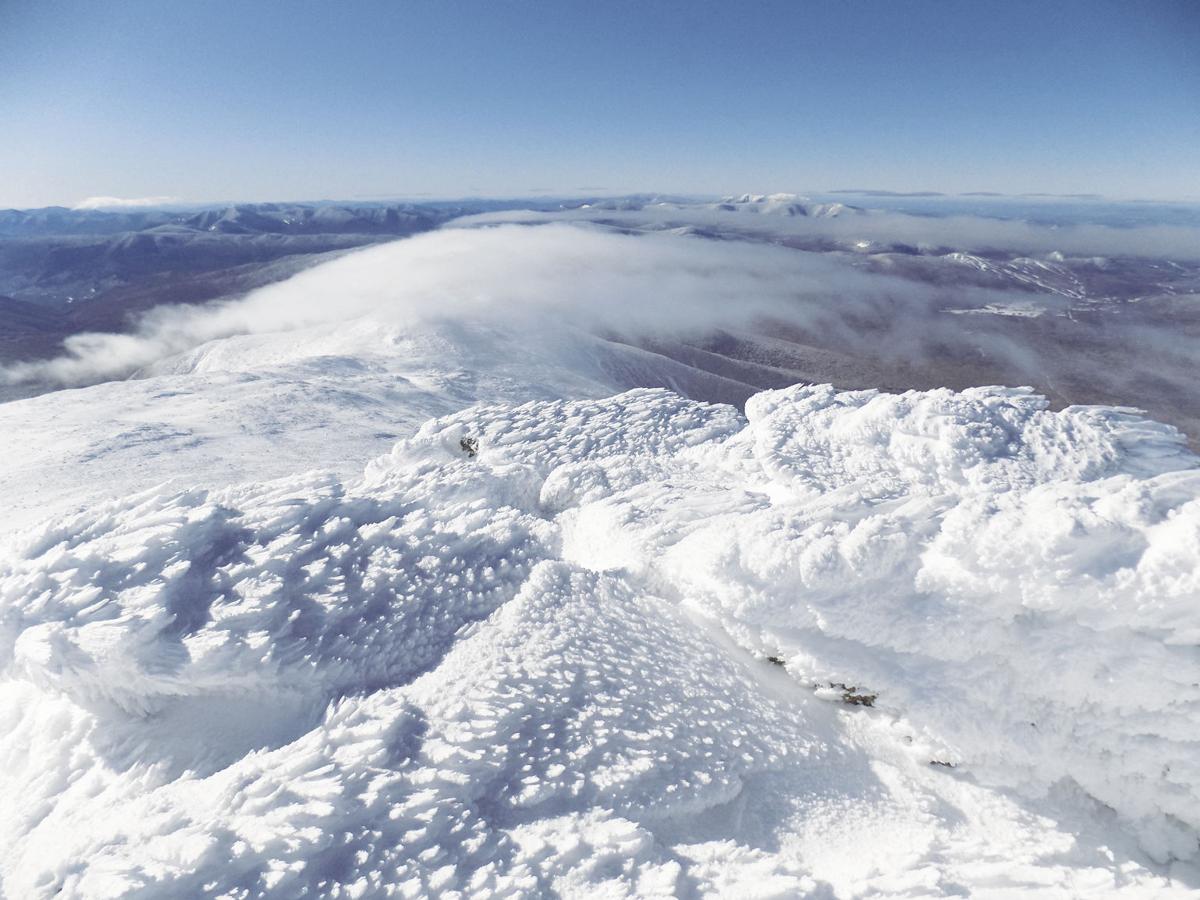 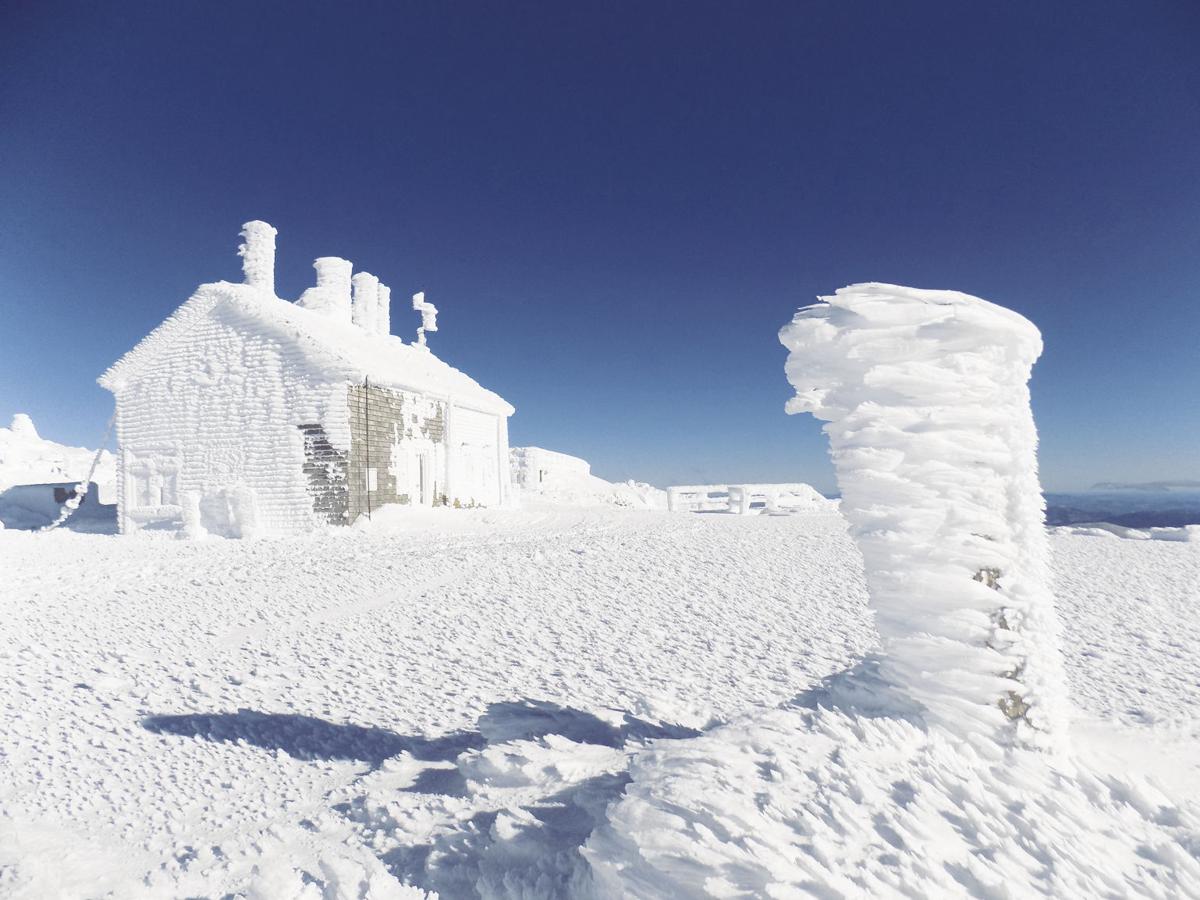 Mount Washington (6,288 feet), the highest peak east of the Mississippi and north of the Carolinas, hangs over the valley. The human experience on the mountain is beyond measure (for example, last year 350,000 people visited the summit’s Mount Washington State Park in five months).

Everyone knows about weather reports from the summit observatory, but less people know about the constant presence of state park crew to maintain the place, not only for their tenants, including the observatory, but for their many leasees and stakeholders on the summit, and to be a safety presence on the winter mountain.

This week, I decided to ask the Mount Washington State Park manager Patrick Hummel if I could grab a ride in state park’s Snowcat up the Mount Washington Auto Road on one of their shift changes, spend a few hours on the summit, return to the base with them and write about it.

After getting the OK from Concord, he told me to be at the base of the Mount Washington Auto Road for a 9 a.m. departure on Wednesday.

On the Mount Washington State Park’s website, there is a Manager’s Blog (blog.nhstateparks.org/category/mt-washington-state-park/) where the present manager can talk about his personal experience, unique occurrences, and be informative about the work they do on the summit.

Patrick Hummel became manager at the end of the summer of 2018 after managing Monadnock State Park. There are three informative blog entries by Hummel, and previously blogs by the last Mount Washington State Park manager Mike Pelchat. All these are a worthwhile reads for Mount Washington enthusiasts.

I mention it because of one quote from Hummel. “Going up and down the mountain, we really have the best work commute.” True.

I arrived at the base of the auto road and as instructed pulled in to the right of a big, red, brand-new Piston Bully Snowcat. Loading equipment into the large custom-made rear passenger compartment was Nate Camille, head of maintenance for the state park. He recognized me from previous summit trips, and we shook hands. He was going up on the shift change with state park employee Jim Scherrard.

Shifts on the summit for the state park are three days on and three off (unlike the observatory which is a week on, a week off). Full-time employees like Camille and Hummel work a fourth day, often in the valley on planning and paper work.

I met the driver for our trip up, Craig Hill from Center Conway. Though he has been a Snowcat operator for the observatory for the past seven years, he is an operator for both the state park and the observatory, depending on the need. Experienced drivers like him who can handle the auto road in extreme weather are few. In the warmer months, he operates Hill’s RVs in Center Conway.

I was invited to sit in the front passenger seat next to Hill, the others rode in the rear passenger compartment.

The full observatory Snowcat had left for the summit before us. We radioed the State Park on top that we were leaving, and headed.

Since the Mount Washington Auto Road now has winter vans with tracks that take passengers up to timberline, there is a lot of radio communication so that vehicles don’t meet on the road, which isn’t wide enough for two. There are half a dozen places along the way below timberline where there is room to pass. We were aware of one van ahead of us.

There was plenty of snow on the lower road after the previous Saturday’s storm. Before that this winter, it was touch and go. The Snowcat was often parked at halfway or timberline and a truck was taken up to it. A big priority is to not damage the road with heavy treads.

But as we would see later, Saturday’s storm had plastered the mountain and the whole Presidentials in white. We moved quickly, reached timberline and started across the Five-Mile Grade.

“After the 175, there was no road,” said Hill. What he meant was that this section often fills in with snow during high winds. It traverses a steep angle, and has to be plowed constantly. After a record wind of 175 mph this winter, it was literally filled in and every foot has to be opened up again.

The observatory Snowcat had plowed some ahead of us and we moved quickly up, turned the corner and headed up the north slope. The views of the northern Presidentials plastered with snow were great; Mount Adams was like a glowing white arrowhead.

Passing the Cow Pasture and Homestretch, we finally climbed the access road to the summit and backed in to the Sherman Adams Building doorway. We unloaded, unlocked the door and went in. The building is not open to hikers in the winter, giving them the feeling of a “real” mountain.

We walked across the warm lobby, crowded in the summer but now empty but for a few workers. Partrick Hummel, friendly and personable, introduced himself to me. We went down the narrow stairs to the State Park employee’s living quarters and offices, where I met Jeff Schall, a former IT professor for the Community College in Berlin who works part-time for the State Park.

He was mentioning to Nate Comille that he has just inspected a window on the Tip Top House that was recently replaced. A west facing opening on the ice-scoured summit is not good.

The crew is constantly busy. In the words of Hummel’s blog, “The days usually start with morning rounds, taking power meter and Sewage Treatment Plant readings, recording fuel and water storage levels, checking on the unoccupied buildings, communication antennas and dishes and the outside grounds. Clearing vents of any ice rime that built up overnight and recording notes in daily work logs. The afternoon can be a time for carpentry, plumbing or shoveling or additional projects.”

Then, there is always the unexpected, and on an island in the sky, there is limited or no outside assistance.

Anyway, I was bolstered with a sandwich, and said I was heading outside for a walk. Upstairs in the entrance way, I donned layers and traction, grabbed my trekking poles and headed out.

It was beautiful and bright but the cold gusts of wind were biting. My plan to head to the top of the Great Gulf was nixed. I managed to climb to the observation deck on the Sherman Adams Building. Then I went to the southern lookout (once called Goofer Point). The southern Presies were draped in a cloud carpet.

Everything on the summit was covered with ice feathers, formed by super-cooled moisture buildup from clouds. Even the flat surfaces. The feathers pointed into the wind rather than away from it. In the valley we don’t see this phenomenon, sharp knives pointing toward their origin.

I wandered around this strange world, beneath towers and buildings covered with ice armor, and a shocking blue sky.

Later, I headed down in the Snowcat with Hummel and Schall, with Hill operating.