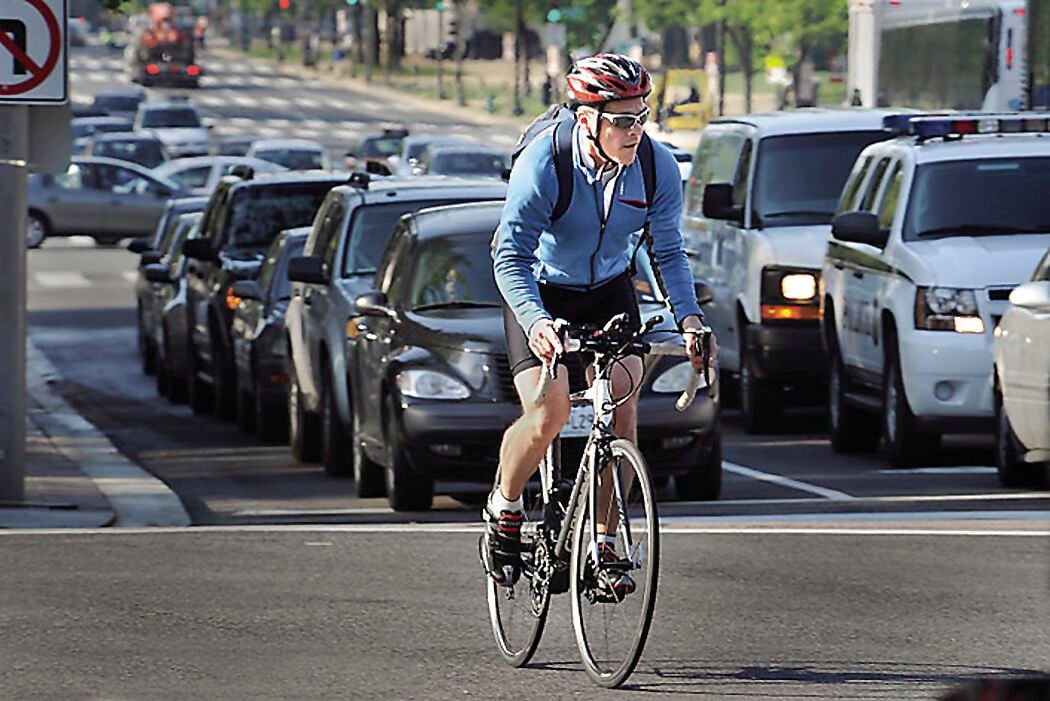 Riding your bicycle on the right, going with the flow of traffic is the safest place to be on the road. (COURTESY PHOTO) 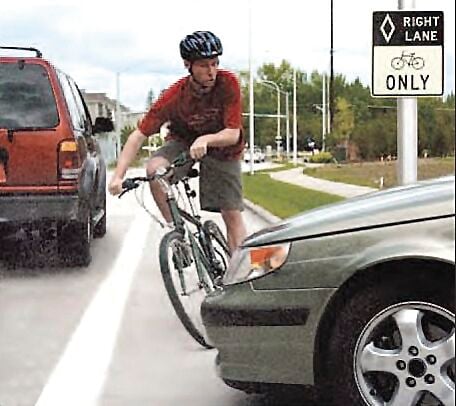 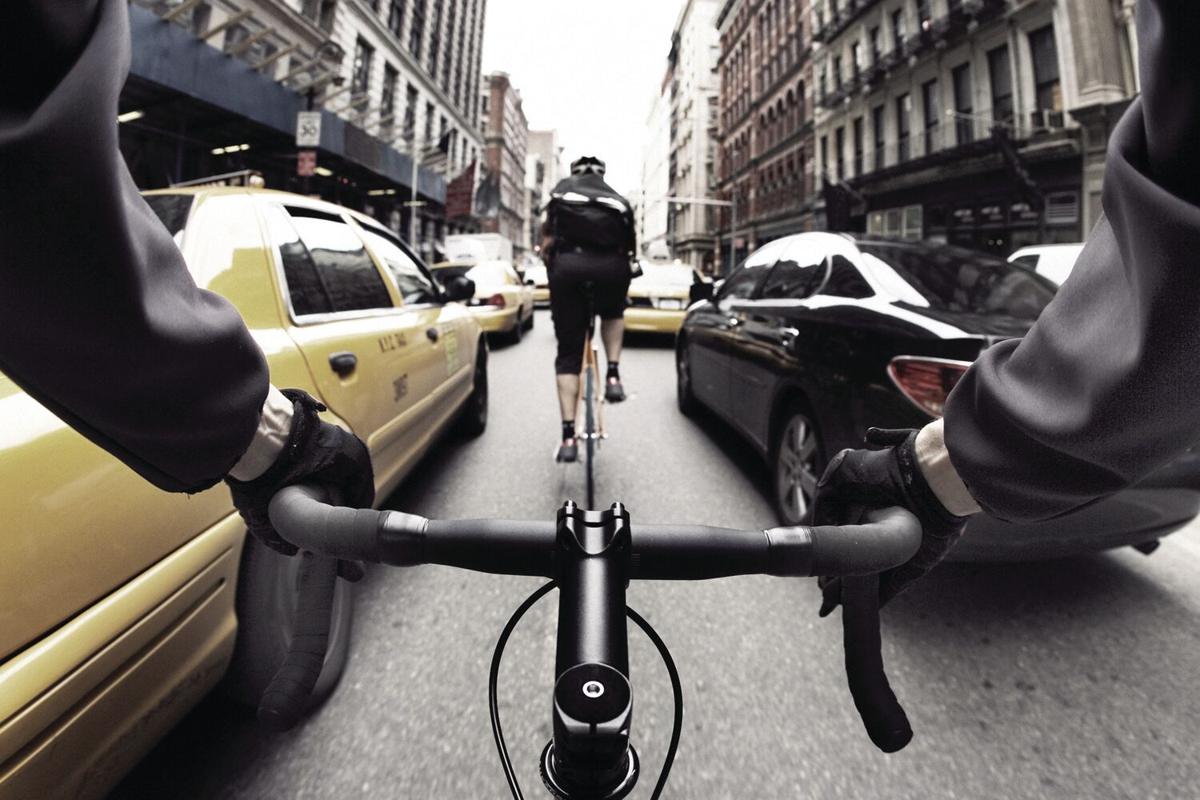 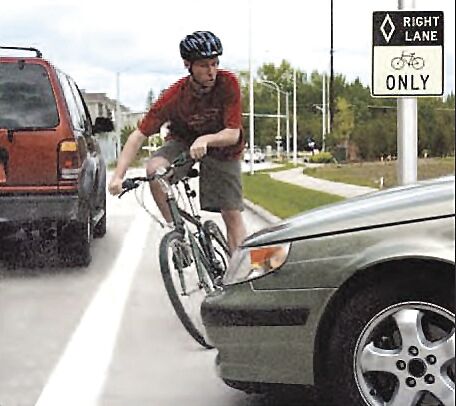 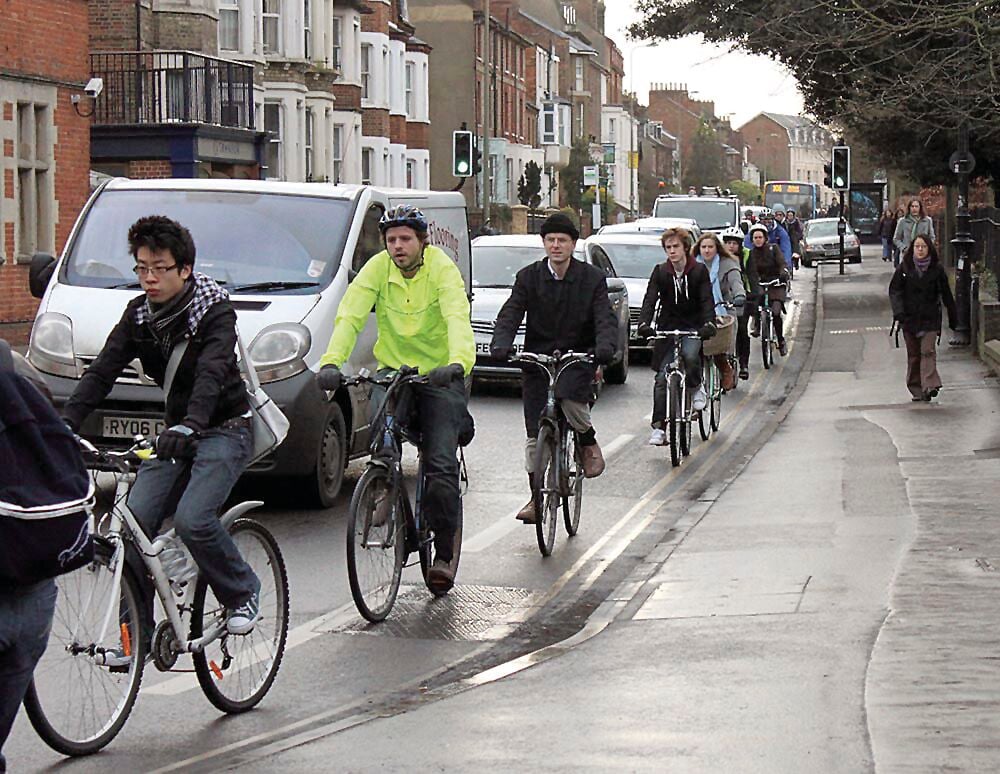 Riding your bicycle on the right, going with the flow of traffic is the safest place to be on the road. (COURTESY PHOTO)

Three years ago, two gentlemen wrote letters to the editor in The Conway Daily Sun, encouraging bicyclists to ride on the left side of the road, facing traffic. Tod Powers, then president of the Mount Washington Valley Bicycling Club, wrote in to challenge those ideas. Peter Minnich’s letter added to the discussion. He felt that “riding against the traffic would be more dangerous and confusing than riding with traffic.”

Minnich cited narrow roads with bigger vehicles, going faster speeds, driven by distracted or inconsiderate drivers as adding more danger to the roads. His suggestion that cyclists pick where and when to ride to lessen conflicts makes sense — “Some roads, at some times of the day, are not appropriate for cycling.”

On June 13, 2017, I wrote a column called, “Why It’s Right to Ride Right and Share the Road” in reaction to these letters. This column is a continuation of that discussion.

I thought the issue of which side of the road to ride on was settled. I guess for some people, it isn’t. Last Friday, Aug. 29, another letter appeared, written by one of those original writers, Gregory S. Wallace of Effingham. He felt that local events where cyclists were struck from behind, “could have easily avoided if they had been facing oncoming traffic.”

Matt Sulem, from Portland, Maine, representing the Bicycle Coalition of Maine, in his letter to the editor on Tuesday, Sept. 1, refuted that claim — “This recommendation would have cyclists do numerous things that are unsafe and illegal. By some measures, riding against traffic is the most dangerous thing you can do on a bicycle.”

Sulem cited a 2020 study on bicycle risk. It found that “operating against traffic put cyclists at about five times higher risk of a collision than riding with traffic. When drivers pull out of driveways or turn at intersections, they look at traffic flow, and are simply less likely to see a cyclist riding in the wrong direction.”

Overall, cyclists are safer and more predictable when they ride on the right, with the flow of traffic.

Riding on the left is one of the biggest causes of crashes with cars. Why? The main reason is drivers pulling out from side streets are looking away from the rider at oncoming traffic. They don’t expect riders to be coming from the other direction. Collisions at driveways and intersections are major hazards for wrong-way riders.

It’s obvious that there are two sides to every argument and road — right and left. The law in the USA and many other countries state that vehicles travel on the right, pedestrians walk on the left, facing traffic. In most states, including New Hampshire, the law states that “bicyclists have the same rights and responsibilities as motorists. Bicycles are vehicles. (NH RSA 265:143).” By definition then, bicyclists should ride on the right, traveling in the same direction as other vehicles. New Hampshire law also states, “Ride on the right side of the road, with traffic (RSA 265:16: II). Riding against traffic is illegal.”

However, there are reasons why bicycling laws are written the way they are. History, safety, and crash statistics all support the idea of bicyclists as operators of vehicles riding with traffic, not against it. Besides the legal issue, there are serious safety concerns if you ride on the left side of the road.

Many people like Wallace think facing traffic while cycling is safer. They reason that if you can see cars and trucks coming at you, you can move out of their way and avoid a crash. They feel that riding on the right with traffic coming from behind you leaves you vulnerable because you can’t see it coming.

The law states cyclists should ride with traffic because studies have shown it’s safer. In John Forester’s book Effective Cycling, he states that the “safest way to ride is as part of the traffic,” going with the normal traffic flow. Like Sulem, he cites statistics that cyclists riding on the right get where they’re going faster and, according to crash statistics, have about five times fewer crashes than bicyclists who make up their own rules.

Riding on the right with traffic makes bicyclists safer and more predictable because they’re following the same rules of the road as cars and obeying the same traffic signs and signals. Drivers can see and know what cyclists are going to do by watching their body language and signals. Riders on the right are where cars expect them to be. Riders on the left, facing traffic, are both unexpected and unpredictable.

Another reason riding on the left is unsafe is traffic signs and signals are oriented toward traffic traveling on the right. If you ride on the left, you won’t see them and may not know a stop, yield, or merge situation is coming.

The law states to ride with traffic on the right. If you are violating that law by riding on the left, you greatly increase your risk of a crash. You may also give up any rights to compensation for injuries because you are breaking the law.

Consider this physical fact shared by Sulem when deciding the side to ride. “The relative closure rate for a bicyclist traveling at 15 mph and a vehicle traveling 30 mph in the same direction is 15 mph. If you’re traveling the same speeds in opposite directions, the closure rate is 45 mph.”

In a collision, what do you think the differences would be in the extent of your injuries?

When I bicycle on the road, I ride on the right. When I ride with friends, family, or grandkids, I insist they ride right, too, for their own safety. I’m convinced as a long time cyclist and League of American Bicyclist’s bike safety instructor that it’s the safest place for us to be.

When cycling on the roads, I stay alert to the sights and sounds of traffic around me. I never ride with earbuds on — I need to hear what’s coming. I also added a rearview mirror to my handlebar so I can see what traffic behind me is doing. Riding defensively and legally has kept me safe all these years.

Mr. Wallace can choose his own side of the road or argument. After all, he is an adult. However, for him to advise others to ride on the left, facing traffic, is irresponsible.

As a citizen, he has every right to question and try to change the current laws, but accident statistics don’t support his assertion that it’s safer to ride on the left, facing traffic.

First of all Sally, why are bicyclists being killed and maimed in larger numbers when they are struck from behind if that practice is so safe? "Struck from behind and killed" is the primary description of crash statistics where bicyclists are killed. Don;t you know that? Why are some of our legally obedient friends dead? Where is your evidence? The vehicles behind the slower bicycle riders are Texting or talking, The sun may be in their eyes, or worse yet they are stoned on or on Fentanyl or impaired by alcohol or pot. More such drivers will be in Maine right next door starting right now,. due to legalization. Do you really want to trust your life to someone like that? Go check with the bureau of statistics like I have and observe the number of bicyclists who rode and were were killed by being struck from behind and are DEAD It will open your eyes. Statically the so called "Legal" riders are dying in larger numbers. I am not anti bicycle, I ride. I am sick of my friends dying for a bogus argument that no longer fits in today's world., The NHTSA clearly says that awareness of your surroundings while riding a bicycle is the primary defense of bicycle riders. Riding facing incoming traffic where all of the threats are coming in front of you Trumps leaving the threats behind you where you cannot save yourself from them. The term "Taking the road" no longer applies, sorry. Hate to have to say it but it's time for us to get our heads out of our bicycle butts.