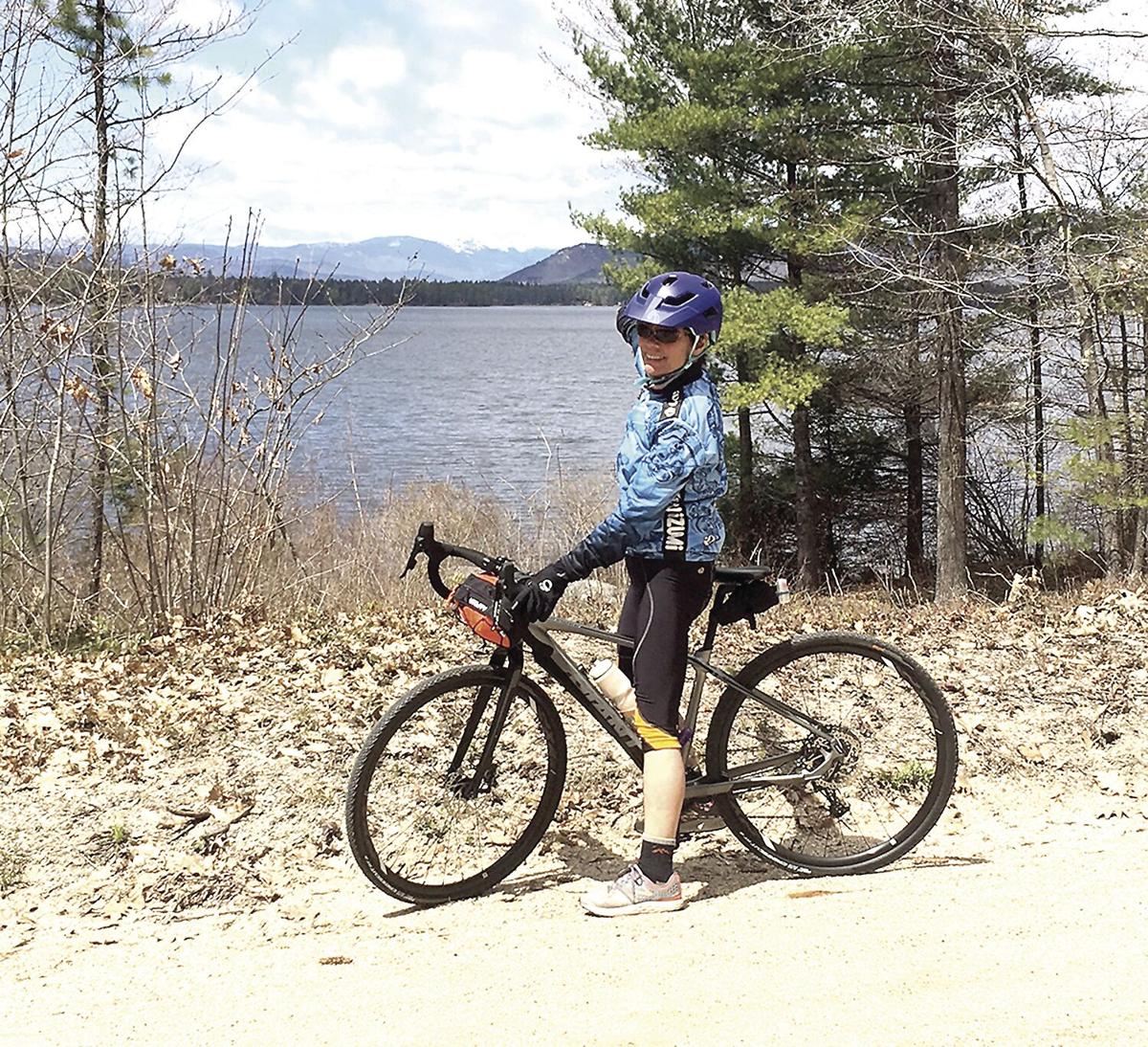 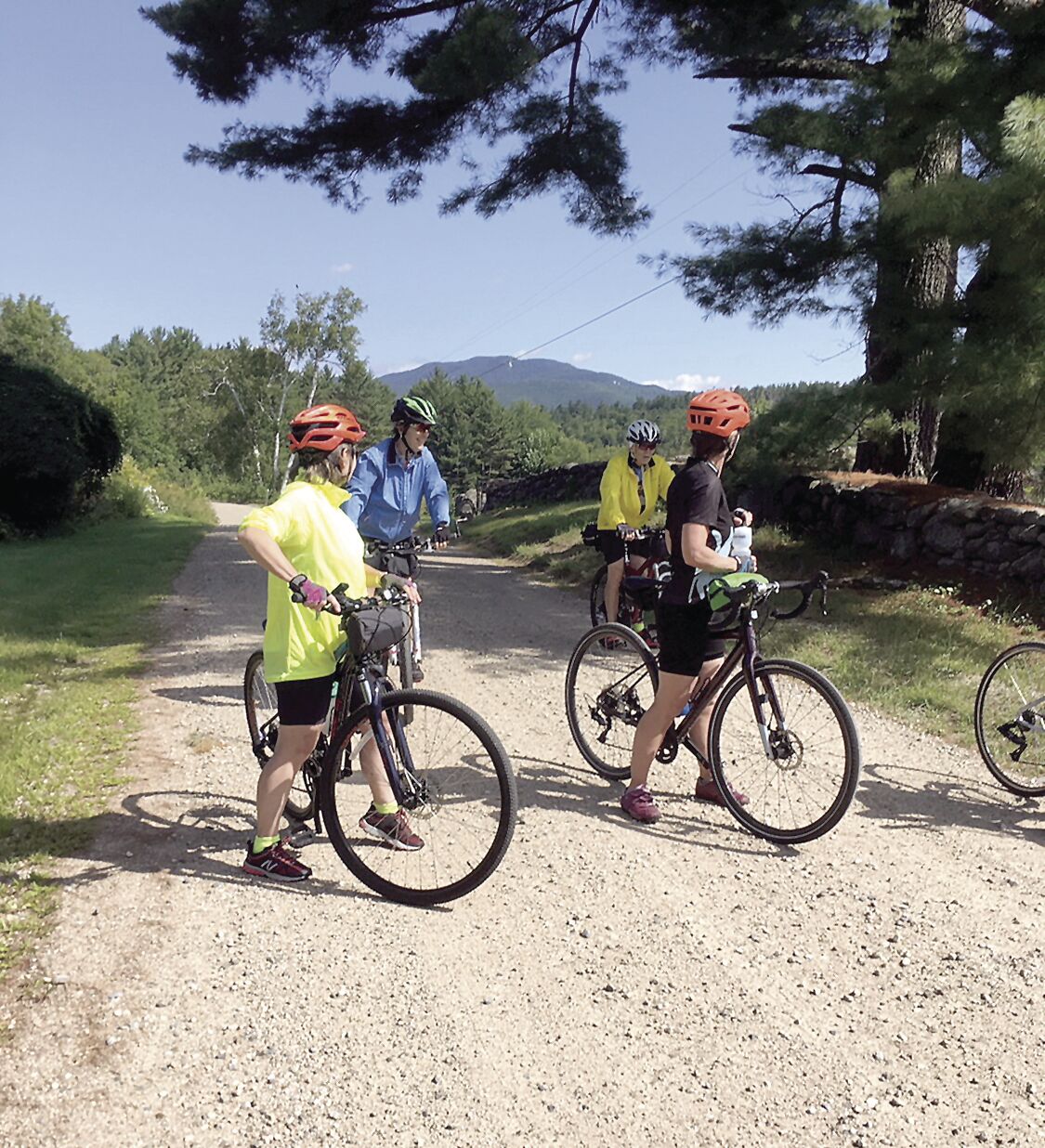 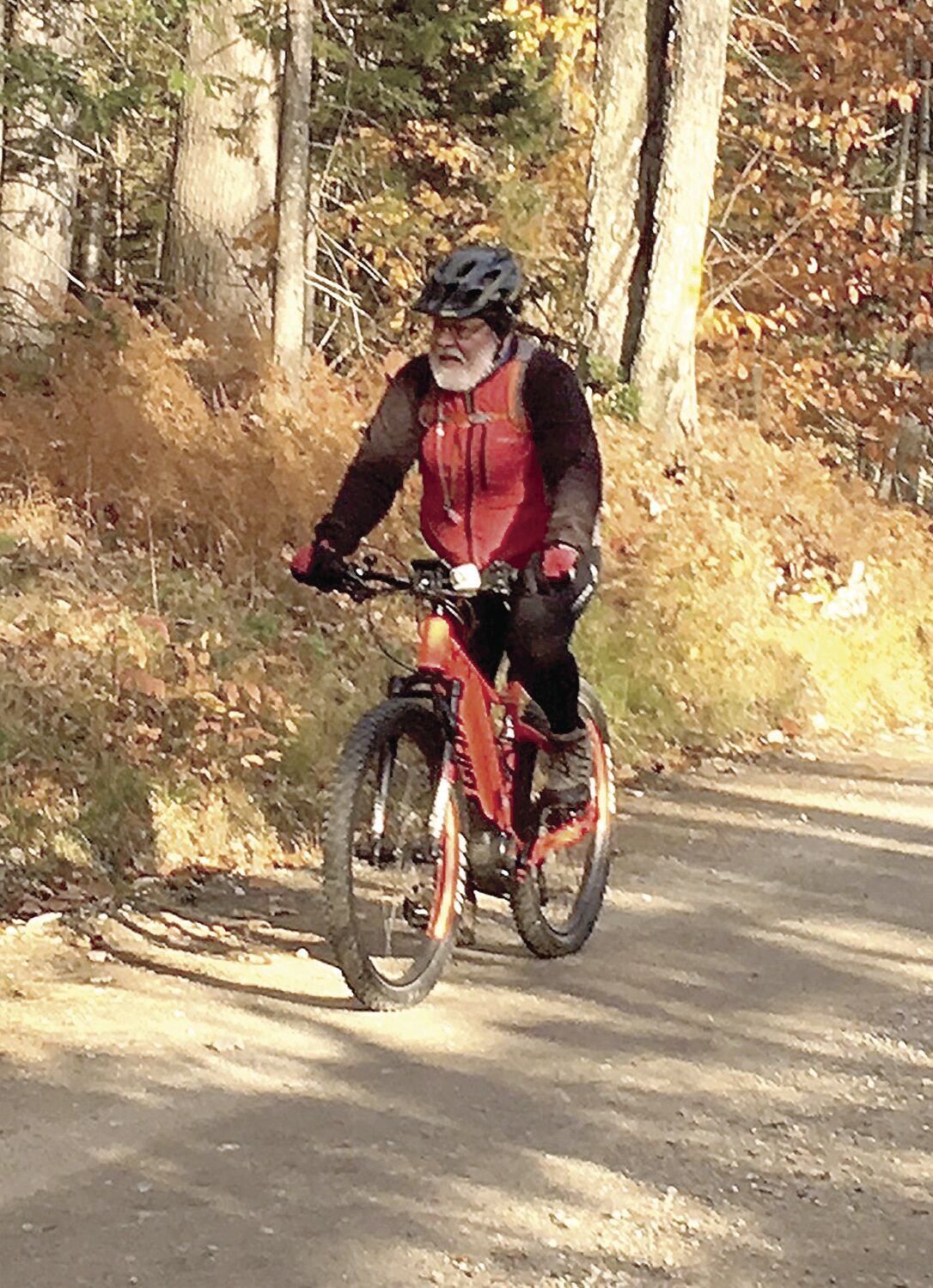 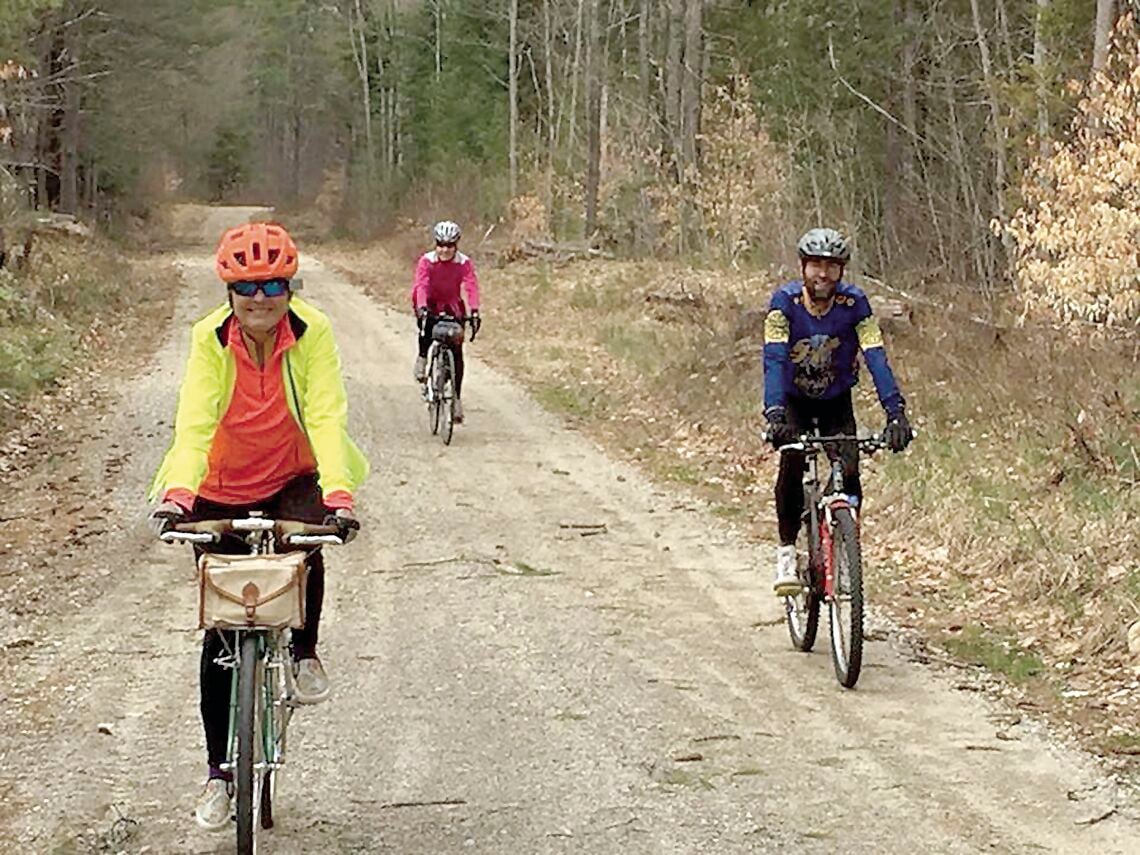 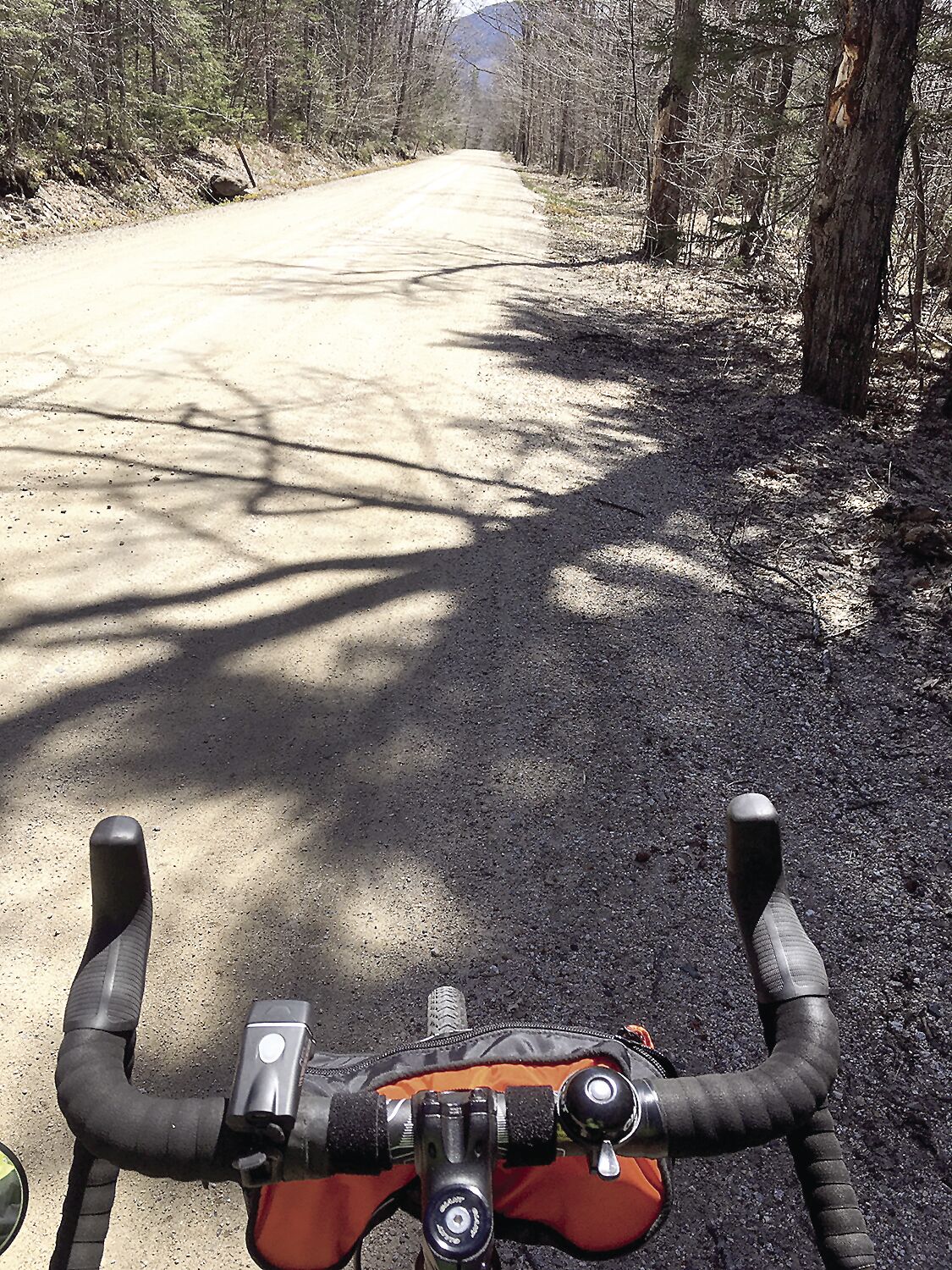 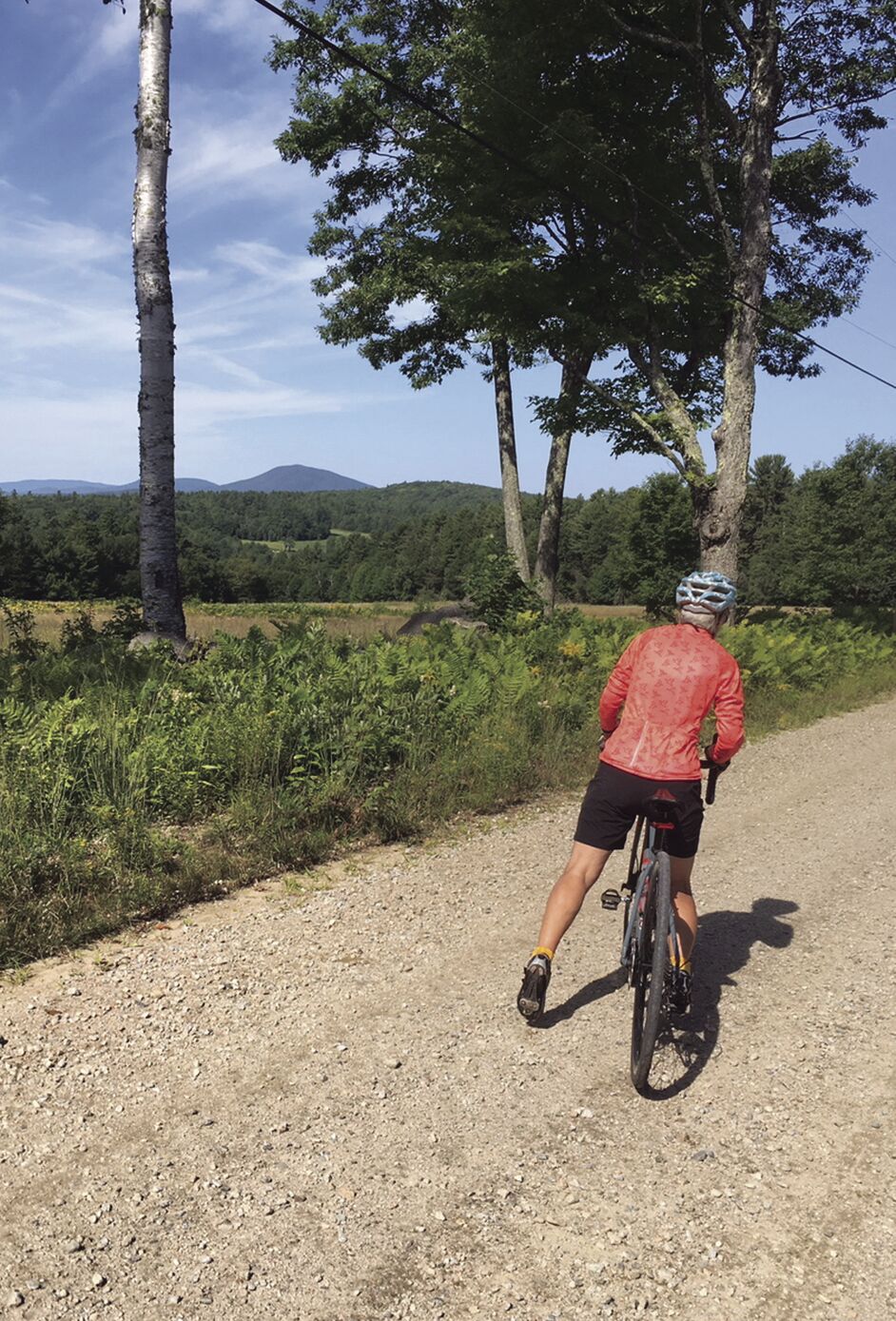 A gravel rider stops to take in the view at the top Fowler's Mill Road in Tamworth. (SALLY MCMURDO PHOTO)

A gravel rider stops to take in the view at the top Fowler's Mill Road in Tamworth. (SALLY MCMURDO PHOTO)

When I was a kid, my bike was my ride to freedom. It took me all over the neighborhood, down dirt roads and over trails. Wherever I wanted to go, I rode it there. It wasn’t a road bike and mountain bikes hadn’t been invented. It was a good old Sears and Roebuck coaster bike, built tough to withstand my cycle abuse. When I graduated to a bike with gears and hand brakes, I continued exploring by bike, not letting my equipment define where I went.

Today, there are so many types of bicycles, specialized for different uses. There are fast, twitchy road and tri-bikes, made for speed on pavement. Touring bikes are made for comfort on the road and carrying a load. Beefy-tired mountain bikes with full suspension are ready to take on rough trails and steep downhill trails and jumps. Cyclocross bikes are designed for technical off-road handling in dirt, mud, sand and grass, but they can be used on pavement or gravel, too.

Enter into the cycling arena a relative newcomer — the gravel bike, made for riding on gravel and dirt roads. I became aware of their existence only a few years ago. Since then, I’ve found myself asking questions about their origins and why the interest in them. Where did gravel bikes come from? What is so special about a gravel bike? Who rides them and why? Where are they going?

There are many opinions about where “gravel biking” got its start. In theory, what I did in the '50s could be considered gravel riding, but it didn’t have that name. Modern interest in gravel riding seems to be linked to “gravel grinder” races like the Trans-Iowa and others in the Great Plains and Midwest that took place in the early 2000s. These 50-to 300-mile-ong races took advantage of “countryside crisscrossed by miles and miles of unused tracks,” and fire and service roads. Riders might use cyclocross, hybrid or mountain bikes in these early races.

Minnesota bike manufacturer Salsa Cycles is credited with developing the first bicycle designed for gravel racing. According to an article I read (tinyurl.com/6jfpnzp8), their team created the “Warbird bike” in 2012 as a response to their realization that cyclocross bikes and road bikes just weren’t enough for gravel racing. They wanted to put a bike on the market that truly did it all, and could encompass all of the features that gravel racing necessitates.

What made it special and different from the road, cyclocross and mountain bikes was its geometry, tires, brakes and gearing. The bikes used are similar to road bikes and cyclocross bikes but have disc brakes for better braking in wet, dirty conditions, sturdy frames to take the dirt road abuse, a more relaxed geometry for more comfortable, upright positioning and stability and frame clearance for the wider tires needed for traction. Tires are as important as frame design, with gravel bike tires at least 35 mm wide and many 38 mm and wider.

Who’s buying and riding these bikes? When I joined N.H. Gravel and Maine Gravel Facebook groups, I was curious about who was riding gravel and where they were going. Were they mountain bikers or road bikers who wanted something different? They could be either or both. Some are sporting lycra and some are wearing baggies. It all depended on their focus and their comfort needs.

Some people ride gravel as another platform for racing. They’re the “gravel grinding” set, heading out to do long races. They’re posting their Strava rides to share with everyone. Others ride gravel to get off the paved roads. They like the dirt roads for their low, slower traffic, scenery and quiet.

There’s also the adventuring group that likes to explore and find new routes and ways. They love linking dirt and pavement to make interesting loop rides. The touring group has discovered the gravel bike frame’s sturdiness and versatility make it a great bike-packing steed. With racks and fenders, the gravel bike can carry a load and go almost anywhere.

A few years ago, I contemplated getting a gravel bike. Though I had road, mountain, and touring bicycles, I was curious to see what a gravel bike could do on valley dirt roads. I wasn’t enjoying riding on paved roads as much as the traffic, speed and distracted drivers increased. I still enjoyed mountain biking on trails but was looking for something in between pavement and trail. My spirit of adventure was still alive and I wanted to discover my own routes and loops. The gravel bike might take me there.

Knowing my interest and curiosity, my husband bought me a gravel bike — the Giant ToughRoad. I noticed right away how comfortable it was. The relaxed frame and wider dropped handlebars put me in a relaxed riding position. With its 1x11 shifting, it was easy to use. The wider tires handled dirt and mud fine and rolled pretty well on the tarmac, too.

My gravel bike has taken me all over the dirt roads of Eaton, Tamworth, Madison and Freedom. It can handle the numerous forest service roads in the White Mountain National Forest and even some trails. For a quick spin around the block on dirt and pavement, it’s my “go-to” bike. With flat pedals on it, I can ride it wearing any shoe. That’s convenient when the ride becomes a “hike-a-bike” to get through rough connections. It is a versatile steed!

There’s no such thing as a “perfect” bike. Each bike has its limitations on what it can do for you and where it can take you. I wish my gravel bike had some rough road dampening features. Washboard roads are no fun. I’m exploring the option of adding a suspension fork to it for just that problem. When I’m grinding up those steep Eaton hills, I sometimes wish I had a lower gear to make it a little easier. I’ll have to check out that possibility, too. Still, I enjoy riding it and seeing where we can go.

Gravel bicycles have expanded the cycling network and experience. As the writer states in a We love Cycling article, (tinyurl.com/5dy65csx), gravel bikes can handle “mellow single tracks, farm roads, gravel, crushed cobblestones, tarmac — whatever. It’s a machine that’s capable of performing on various surfaces while sustaining comfort. Their adaptability, versatility, and ruggedness make them a perfect commuting bike, an ideal light touring or bold bike, a great winter training bike or simply that one bike that can tackle any sort of terrain you care to try it on.”

If you haven’t ridden a gravel bike or gone on a gravel road ride, fall is a great time to try this new kind of cycling experience. The colors and the views from dirt roads are spectacular. The hills give you a good challenge and workout, but the traffic won’t wear you down. Rent, demo or borrow a gravel bike and see what it can do and where it can take you.

Grab a Gazetteer or topographic map to plot a course. Check out rides listed in N.H. Gravel Facebook group under “Announcements” or see what Maine Gravel Facebook users are riding. To explore with a group, check out Mount Washington Valley Bicycling Club’s “Marianne’s Tuesday Dirt and Pavement Ride” (tuesdaydirtnpavement.blogspot.com/).

Do you ride gravel? Feel free to share your reasons and experiences with me and I’ll include them in another article. Send them to the Conway Daily Sun with the subject line — “Gravel Rides.”

“The Howler” Mountain Bike Race — this Saturday, Oct. 30, at Roger’s Crossing in Bartlett, a time trial format, starting at 11 a.m. The event benefits the Attitash Alpine Education Foundation. Go to the Bikereg for more details.