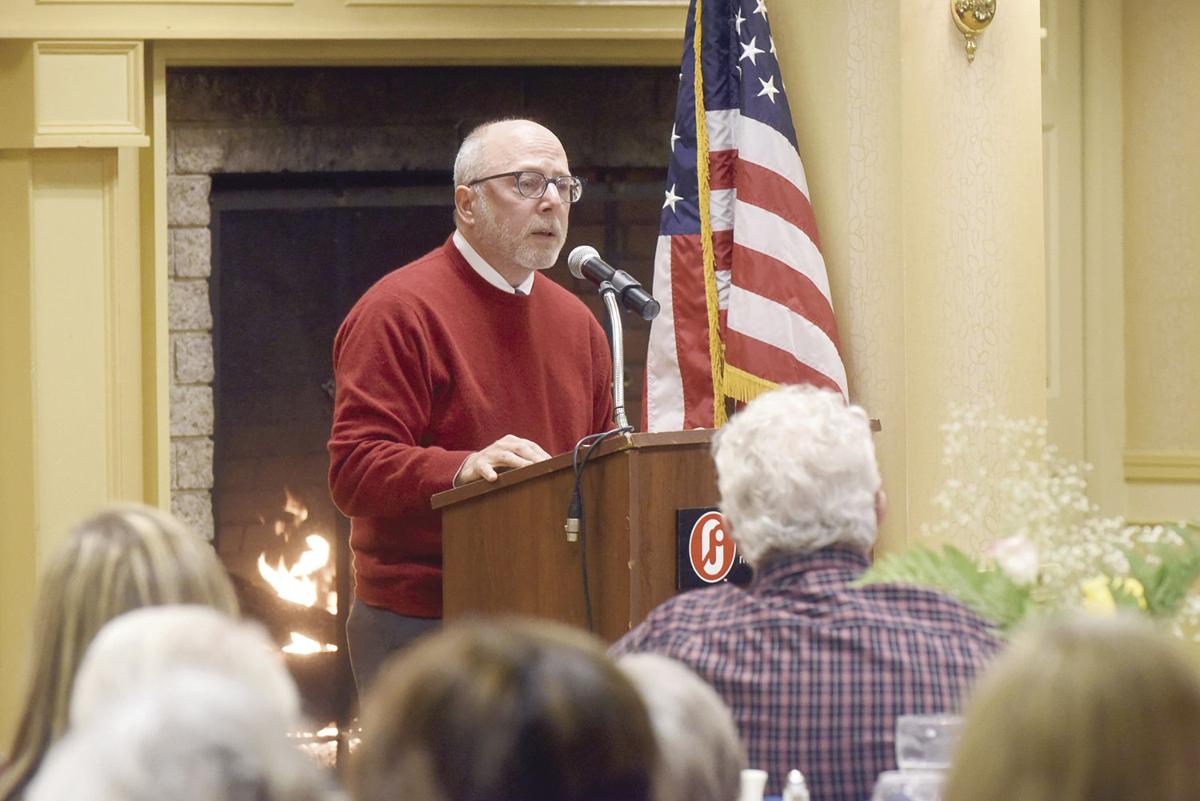 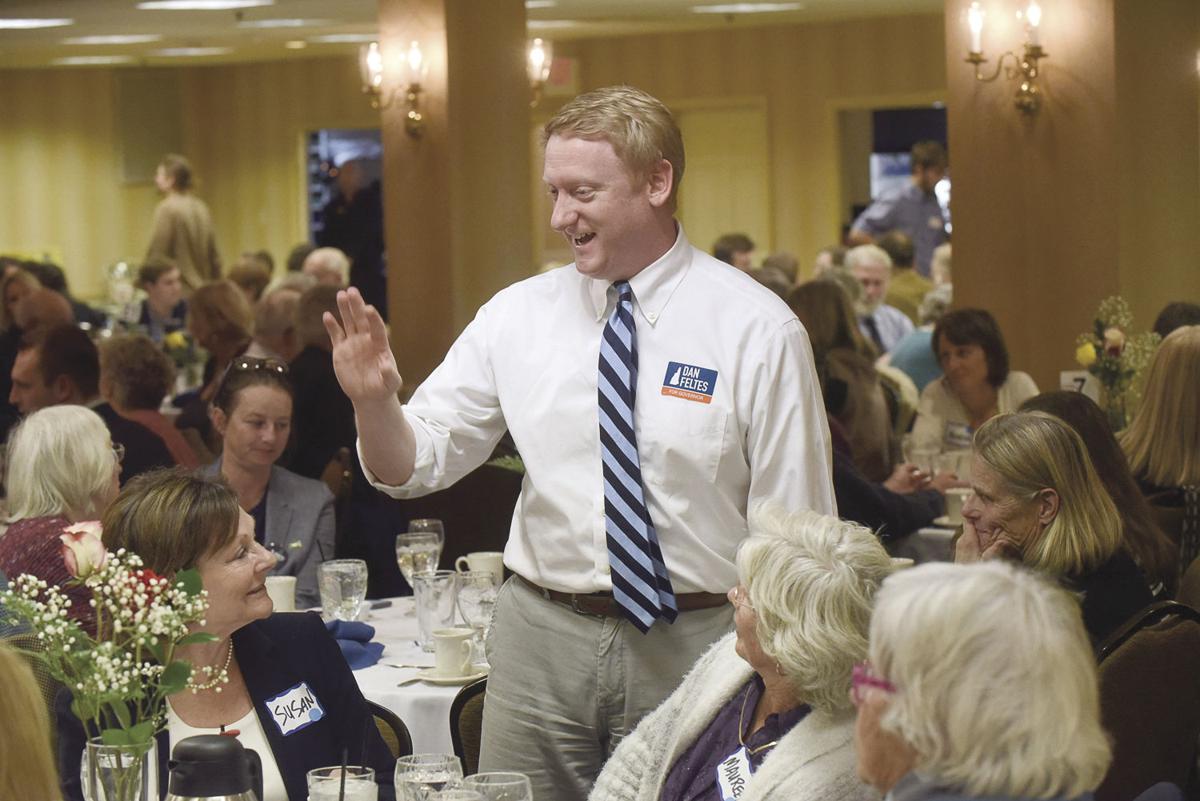 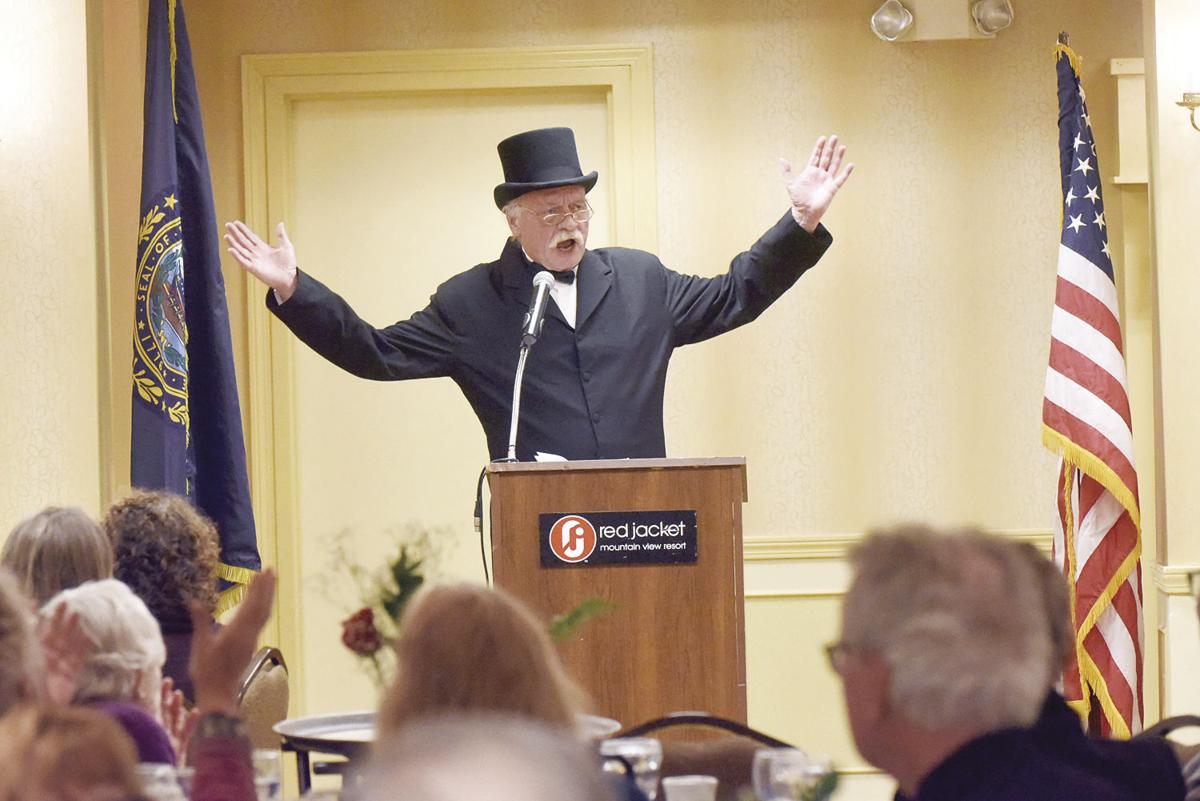 George Cleveland makes a speech in character of his grandfather Grover Cleveland during the Democrats annual fundraising dinner at the Red Jacket Thursday. (JAMIE GEMMITI PHOTO)

George Cleveland makes a speech in character of his grandfather Grover Cleveland during the Democrats annual fundraising dinner at the Red Jacket Thursday. (JAMIE GEMMITI PHOTO)

The evening was highlighted by a guest appearance by President Grover Cleveland (portrayed by his grandson, George Cleveland of Tamworth).

In introducing both gubernatorial candidates, Knute Ogren of Effingham Falls, CC Democrats chair, said possible candidate Steve Marchand was unable to attend as he was campaigning in Exeter and Dover with presidential candidate Andrew Yang.

Feltes said that he is running for the working class people of New Hampshire and attacked two-term Republican Gov. Chris Sununu for being out of touch with the needs of everyday people.

“I have a much different perspective than the current governor,” said Feltes. “My dad wasn’t governor; my brother wasn’t a U.S. senator. I was never gifted a ski resort. My dad worked the same furniture factory for 45 years … day in and day out.”

He said his parents “instilled in me the values of hard work, honesty and integrity and of looking out for everyone, especially those who are left out and left behind.

“Those are the values I took with me as a legal aide attorney when I went to work for New Hampshire Legal Assistance for about a decade,” Feltes said.

He noted that Sununu last year signed 57 vetoes compared to the 50-year New Hampshire average of 6.8 vetoes per year. “What’s more, 42 of the 57 vetoed pieces of legislation had bipartisan support … and not once did he try and reach out to negotiate on those 57 pieces of legislation.”

He said Democrats will work to defeat Trump and Sununu and re-elect Democrat officeholders and challengers in the state, from incumbent U.S. Sen. Jeanne Shaheen on down.

Originally from Iowa, Feltes and his wife Erin have two children, Iris and Josie. For more, go to danfeltesnh.com

He was followed by Volinsky, 63, of Concord. Volinsky was lead counsel in the landmark decisions in Claremont School District v. Governor of New Hampshire in which the New Hampshire Supreme Court recognized a constitutional right to a public education (1993) and held New Hampshire’s school funding system unconstitutional (1995).

He said his campaign is built on four basic truths that he considers the four pillars: education; climate action, health-care access and dealing with income inequality.

He said the education funding crisis based on property taxes that was limited to a few towns like Claremont in the 1990s has spread to other communities like Berlin, Rochester and Manchester.

“We need to have a sustainable state, and if elected governor it will be my highest priority,” Volinsky said, drawing applause.

“When I think of climate action, I think of the climate emergency that exists; we are beyond half-measures,” he said of his platform’s second pillar.

“The final pillar is income inequality,” he said. “What divides us these days is a difference in income; it makes it harder to talk to one another; it exists in our state and nationally. It is the greatest threat to our democracy and we need to take it on head on and I intend to do that.”

Having grown up the son of working class parents in Levittown, Pa., Volinsky said he was drawn to the legal profession to help make a difference in the lives of the working poor.

He ended his remarks by noting that he will not take “the pledge” against imposing new taxes, which drew strong applause.

“The pledge is a political promise to value our inadequate and unfair funding system and property taxes over almost everything else. Great leaders, like (former governors) Jeanne Shaheen, John Lynch and Maggie Hassan have tried to address the problems of our state while being handcuffed by the pledge and they were unable to do it. That is why I will not take the pledge because I want to solve these problems.”

A Granite State resident for 37 years, Volinsky is married to corporate attorney Amy Goldstein. They have three grown children.

For more, go to volinskynh.com.