Vito Marcello, owner of Vito's Italian Bistro in North Conway, stands with Gov. Chris Sununu on Monday at the Omni Mount Washington Resort. Marcello was named Restaurateur of the Year by the N.H. Lodging and Restaurant Association. (MARGARET McKENZIE PHOTO) 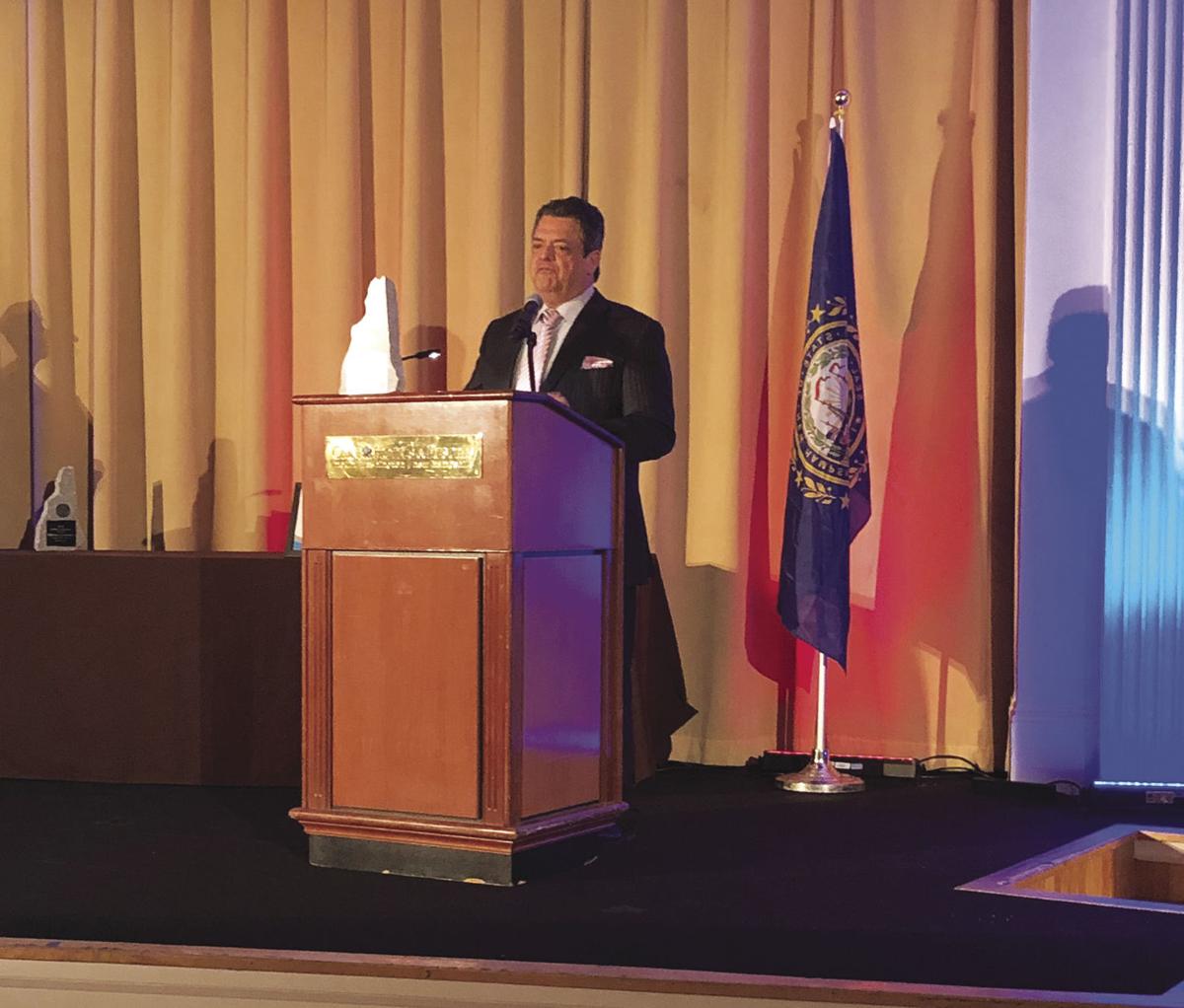 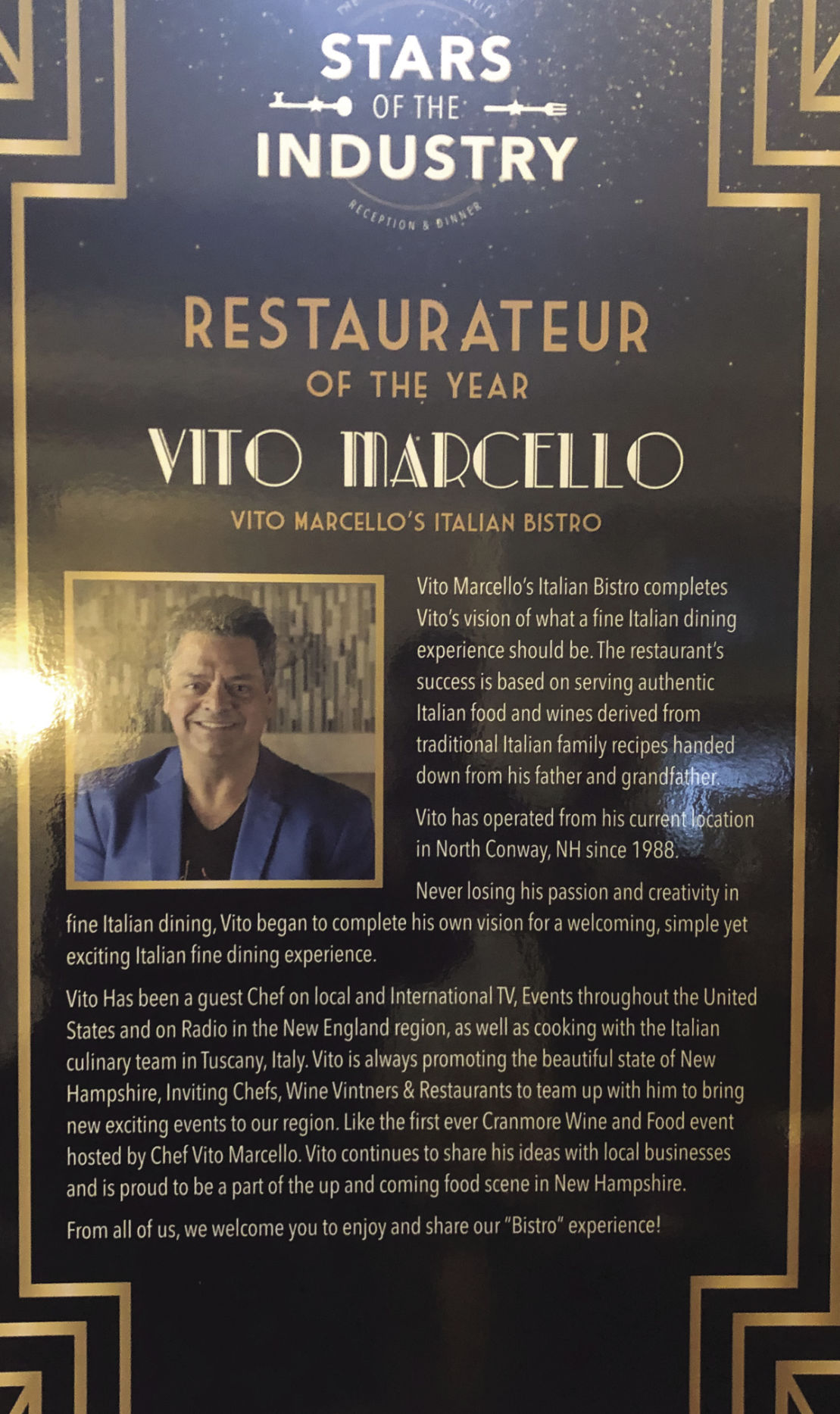 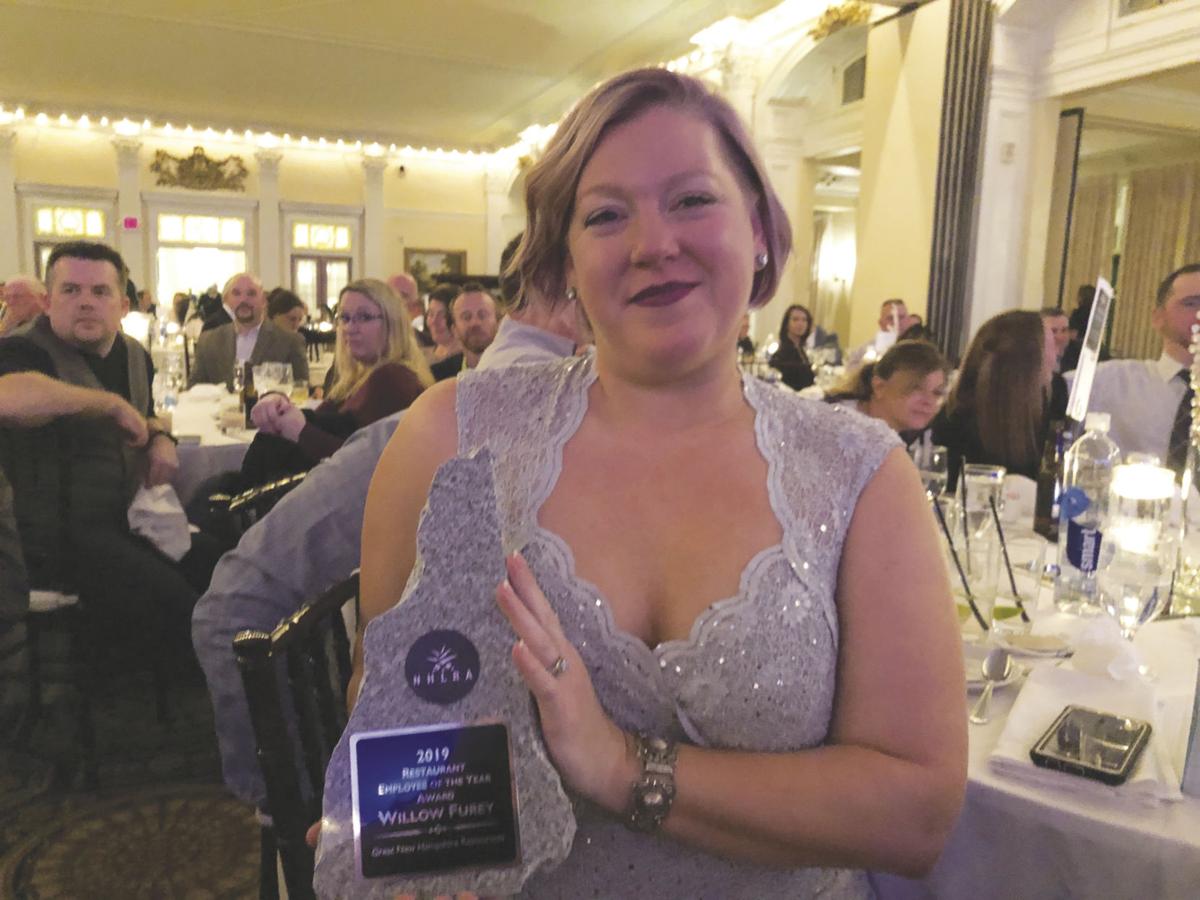 Willow Furey, 39, manager of the Laconia T-BONES, holds her Restaurant Employee of the Year Award on Monday at the NHLRA 'Stars of the Industry' dinner at the Omni Mount Washington Resort. (MARGARET McKENZIE PHOTO)

Vito Marcello, owner of Vito's Italian Bistro in North Conway, stands with Gov. Chris Sununu on Monday at the Omni Mount Washington Resort. Marcello was named Restaurateur of the Year by the N.H. Lodging and Restaurant Association. (MARGARET McKENZIE PHOTO)

Willow Furey, 39, manager of the Laconia T-BONES, holds her Restaurant Employee of the Year Award on Monday at the NHLRA 'Stars of the Industry' dinner at the Omni Mount Washington Resort. (MARGARET McKENZIE PHOTO)

BRETTON WOODS — The New Hampshire Lodging and Restaurant Association hosted its 2019 Stars of the Industry Award Dinner on Monday at the Omni Mount Washington Resort, celebrating not only the group’s 100th anniversary but also the 2019 Industry Stars of the Year, a group that included several Mount Washington Valley restaurateurs.

A new slate of NHLRA officers also was elected. Jay Bolduc of Great New Hampshire Restaurants of Laconia was named to succeed Pamela Bissonnette of Concord as new chair.

And North Conway’s own Vito Marcello of Vito Marcello’s Italian Bistro at 45 Seavey St. was given the prestigious Restaurateur of the Year award.

Among five entities getting the Good Neighbor Award was Delaney’s Hole in the Wall of North Conway. Other recipients were Great N.H. Restaurants, The Common Man, Fratello’s Italian Grille in Manchester and The Homestead Restaurant and Tavern of Merrimack.

Introducing Marcello’s award was John Dunn, director of operations at Michael Timothy’s Dining Group as well as vice-chair of restaurants for the NHLRA Board of the Directors.

Dunn said: “The restaurateur of the year is awarded to an individual who has achieved success in his or her establishment, supported the industry and embodies the spirit of hospitality in New Hampshire. I had the opportunity to talk to Vito before the event tonight, and one word I would pull out from him is passion.

“This guy has got some passion for this business,” Dunn continued. “Everyone who walks into Vito’s bistro is important to him. It is his customers’ experience and his commitment to authentic Italian food and wine that has made his restaurant a North Country landmark for over 30 years.

“At 12 years old, Vito jumped up on a milk crate in his father’s restaurant and started cutting mushrooms,” Dunn said. “He knew from that time that he wanted to be a great chef of classic Italian cuisine.”

Vito was characteristically humble in accepting the award, crediting his staff and completing Dunn’s tale by saying that after age 12, “I started doing dishes; did dishes for two years and then jumped on the line. So I think at the end of the day, Vito still does pots and pans and does dishes, to help the amazing staff that I have.”

He also gave props to “people who are no longer with us,” as well as his longtime help. “It’s just one big family business,” he said. “I think when you have it together, you can expedite properly, run the business the way you want, do it the way you want.”

Marcello said another reason for his success is that he’s open to new ideas. “I’m not a know-it-all. I learned a long time ago to listen to others.” Other words that he lives by: “Do the right thing and be consistent and don’t serve anything you won’t eat.

“I cook what I want to eat,” Marcello said. “What you want to serve to guests is what you would serve at home. That’s what my dad said.”

He credited “my sidekick, Chef David Perry, and my assistant manager Cynthia Ehmett for helping me achieve all these goals. We have a great super spring lineup. We’re going to bringing the second Food and Wine event to the base of Mount Cranmore on June 27,” Marcello said.

Laconia’s Furey was introduced by Tom Boucher, CEO of Great N.H. Restaurants, who said: “She sets a tremendous example to all of our staff and peers of what a true team player is all about. Willow’s tireless zeal to improve the success of her location with enthusiasm and positive energy is an example to us all. And I hope, Willow, that you’ll bring that zeal to Concord T-BONES, where you’ll be a dining room manager.”

Stepping up to accept her award, a tearful Furey said it’s been a whirlwind year, having recently closed on a house with her fiance, Todd Calder.

She thanked Calder, her mother and her staff for making the award possible. She said she was home schooled in Webster, Mass., and started young in the restaurant industry, getting up at 2 a.m. to make doughnuts.

Once she set foot in a restaurant, she said, “I knew this was my niche.

“I feel at home every day. I am on vacation this week, and I called up my staff and said, “I miss you guys.”

The other 2019 Stars of the Industry award-winners were:

• Jared Broider of Residence Inn by Marriott in Concord, named Lodging Employee of the Year.

• Rick Spalding of High Liner Foods, who was named Allied Member of the Year.

• Zach Smith of Flag Hill Distillery & Winery, tapped as Chef of the Year.

• Jack and Andrew Carnevale of the Bedford Village Inn, New Hampshire’s Innkeepers of the Year.

• George Lawrence of the Red Arrow Diner (with locations in Manchester, Milford, Londonderry and Concord), who received the Lifetime Achievement Award.