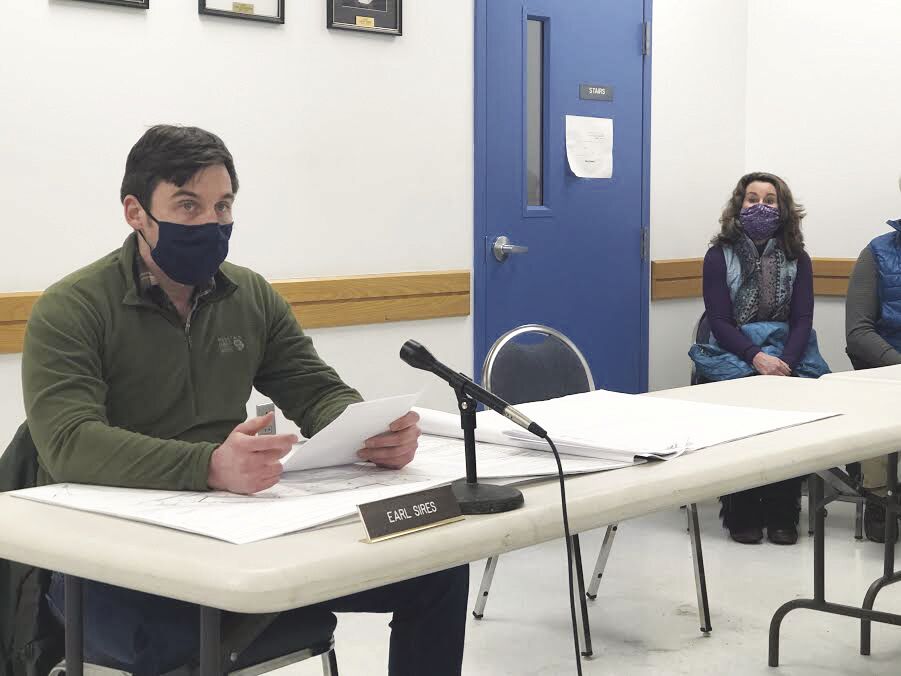 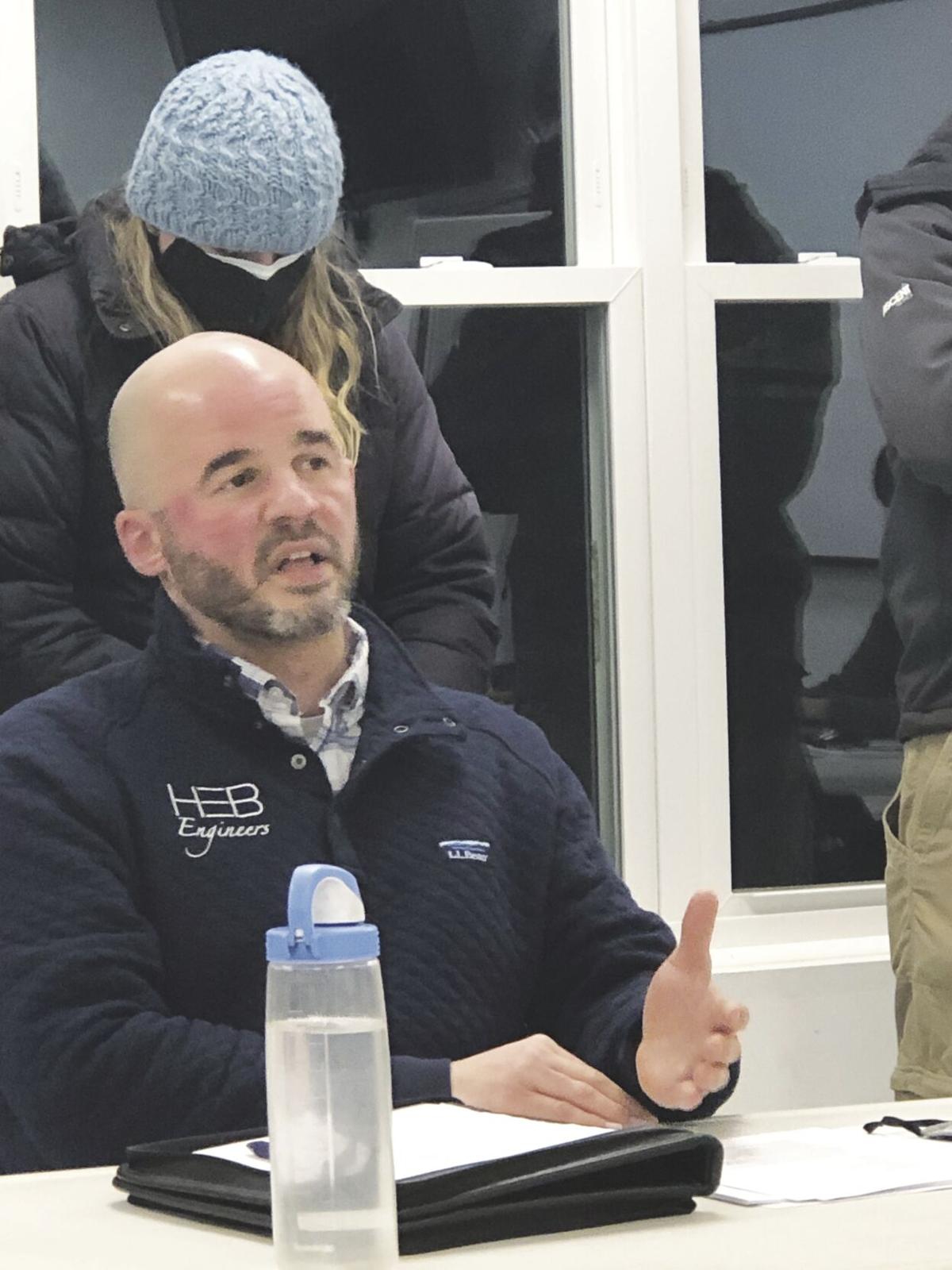 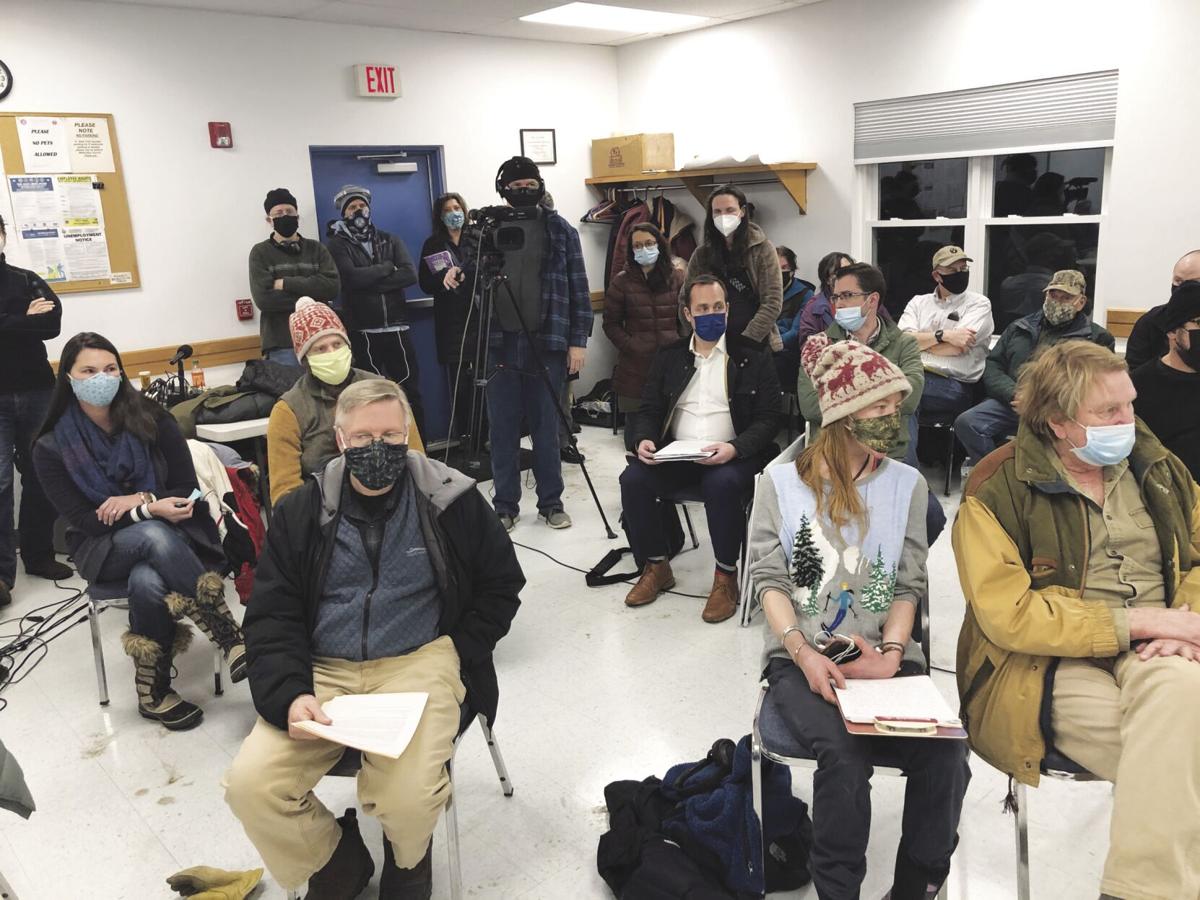 About 30 residents turned out to the Conway Village Fire Station last Thursday for the Conway Planning Board’s review of a proposed four-story hotel in Intervale. (TOM EASTMAN PHOTO)

About 30 residents turned out to the Conway Village Fire Station last Thursday for the Conway Planning Board’s review of a proposed four-story hotel in Intervale. (TOM EASTMAN PHOTO)

CONWAY — Does an oversized commercial property constitute a legal actionable nuisance for neighbors?

That was one issue raised as the Conway Planning Board began site-plan review last Thursday of Viewpoint North Conway LLC’s proposal to build a 105,836-square-foot, four-story, 105-room hotel at 3599 White Mountain Highway, a site currently occupied by the Intervale Motel that sits across from the state Scenic Vista.

The 16-room motel and 3.66-acre parcel it sits on were sold in December by the John R. Cannell Revocable Trust to developers for $1.4 million.

According to project engineer Josh McAllister of HEB Engineers, one of the developers is P.J. Patel.

An internet search turned up a P.J. Patel who heads Lake City Hotels of Lake City, Fla., a hotel management company affiliated with Marriott, Radisson, Hilton and Choice hotels. A call to his number was not answered.

About 30 people attended Thursday’s session in the meeting room of the Conway Village Fire Station. Many questioned project engineer Josh McAllister of HEB Engineers of North Conway if the project could be cut back to three or even two stories.

That remains to be seen; however, the board did unanimously vote to increase the buffer on the east and south to 50 feet.

Town Engineer Paul DegliAngeli also has determined a traffic study will be needed to determine the project’s impact on Route 16 and Intervale Crossroads.

Planning Board member Earl Sires also questioned the size of the proposed hotel and cited a nuisance clause in the town’s site-plan review regulations that can be raised by complainants concerning abutting projects.

Sires said he learned of the clause in the Zoning Ordinance last week.

Noting that McAllister had said the footprint of the hotel would be 22,400 square feet, Sires said that size would be out of place with what the Master Plan espouses for that section of town.

“I think this would bring a pretty fundamental change to the Intervale area and the experience of being there for folks who live nearby,” he said. “And I think it’s really especially important for us to consider the abutters and the impact this might have on them.”

Sires said such a large hotel project would set a precedent.

“If somebody wants to build a very similar building down the road, there may be less pushback and less argument against it, because there’s precedent now for a building of the size in this area,” he said.

Sires also proposed the buffer be increased to 50 feet between the Mountain View Estates condominiums to the east side and a residence to the south, saying the zoning ordinance, under 110.29A-6, allows the board to increase the buffer up to that limit as a way to mitigate nuisance for projects abutting residentially zoned lands and uses. It may also request fencing or a vegetative buffer, Sires said.

He also said the traffic impact study ought to consider crosswalks, to be paid for by the developer across Route 16 to the Scenic Vista.

In response, McAllister expressed frustration with what the board wanted him to do, noting the project as proposed met all town regulations.

He noted that over his 17-year career, a project such as this one would be a “slam dunk” and he wondered exactly what standards he was to follow in meeting the board’s requests.

He also asked for the correlation between the Master Plan and the Zoning Ordinance.

Town Planner Tom Irving responded that the Master Plan is a guidance document while the applicable regulations are in the Zoning Ordinance and the site-plan review regulations.

McAllister said the state Department of Transportation had given a driveway permit onto Route 16 that indicated no need for a traffic impact study. He said he had submitted it for review to the town planner and engineer for Intervale Crossroads, which is a town road.

He said he had a few years ago proposed changing town building height regulations that would allow higher buildings that were further away from a road but that they were not well received.

Board alternate Steve Steiner, sitting in for member Sarah Frechette, who was unable to attend, expressed concern for the design, saying, “When I look at (the proposed Junge’s hotel replacement project), you’re on the strip with like buildings. This doesn’t fit, and I’m not going to support this … It doesn’t belong in our community at this location so I’m voting no.”

Board member Ben Colbath praised McAllister for his years of due diligence and past work but said he was taken aback by the project’s scope. “I think that this is a brazen design and a slap in the face of the community,” said Colbath.

Steiner noted that as a ZBA and planning board member, he had never seen such a strong turnout. “This tells me I am supposed to be looking out for the taxpayer and that will guide my vote.”

During public comment, residents discussed the impact on residential neighborhoods.

Mike Speck, an abutter who is president of the Mountain View Condo Association, said the proposed project’s building height far exceeds others in the area and raised concerns about noise, vehicle light pollution, pedestrian traffic and traffic flow.

“They they completely ignored the surrounding area and the needs of the residents who live in the area,” said Speck.

Speck pointed out that the project would impact a trailhead of the Mount Washington Valley Ski Touring and Snowshoe Center.

Cort Hansen, executive director of the nonprofit, said the touring center looks forward to holding discussions with the new owners to carry on the agreement they had with former owner John Cannell.

McAllister said his clients have agreed to work on an agreement.

The site-plan review of the project was continued to the board’s next meeting, set for 7 p.m. Feb. 25 at the new Conway Town Hall on Main Street in Conway Village.

In other business, the board unanimously gave site-plan approval to a proposal by LP Gas, Inc. (Eastern Propane) to demolish a 1771-built structure that reputedly once served as a town meeting place in Conway’s first years to construct a 2,528-square foot office building and a 5,500-square foot maintenance building with associated infrastructure; and expand the distillate storage building with no proposed increase in distillate storage capacity at 1534 East Main Street, Center Conway.

Abutters from the Robinwood subdivision raised concerns about egress and access to their properties via Robinwood Lane.