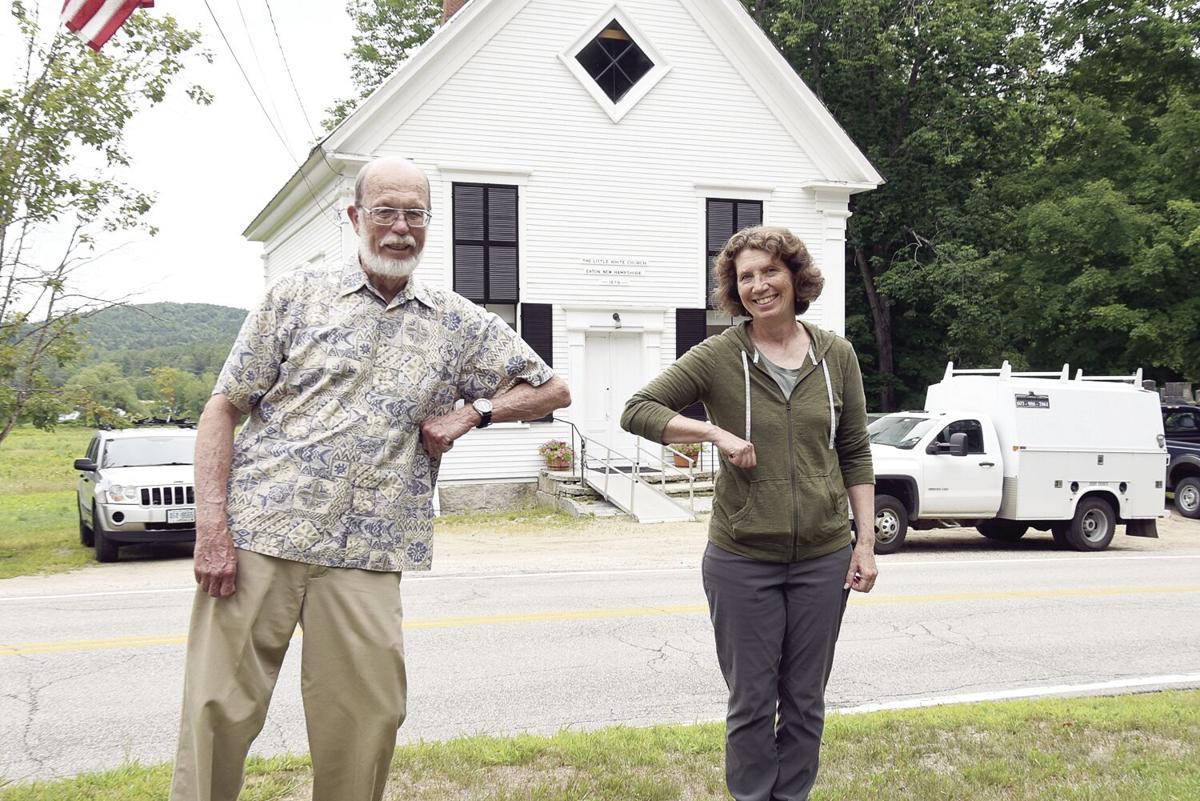 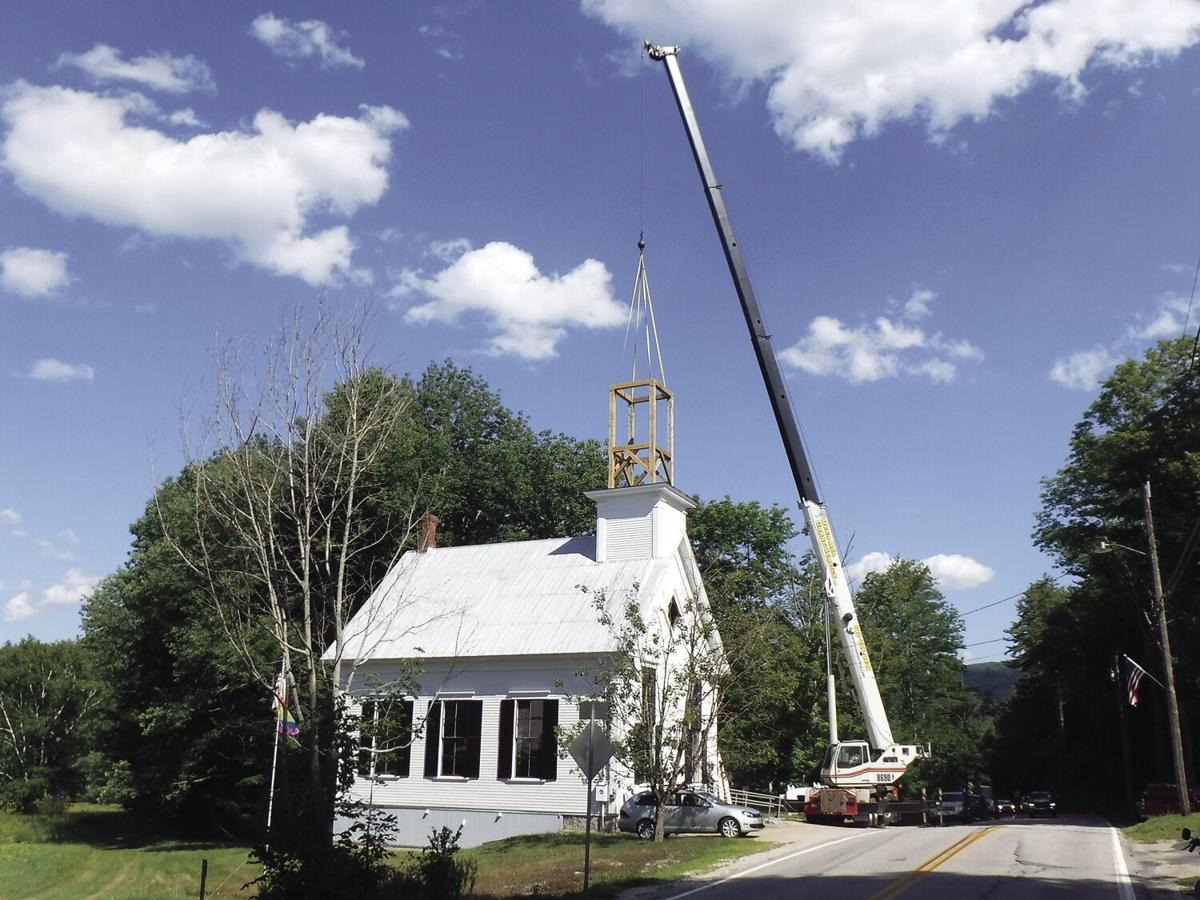 A crane helps place the timber framing for the new steeple at the little white church in Eaton on July 31. (JAMIE GEMMITI PHOTO) 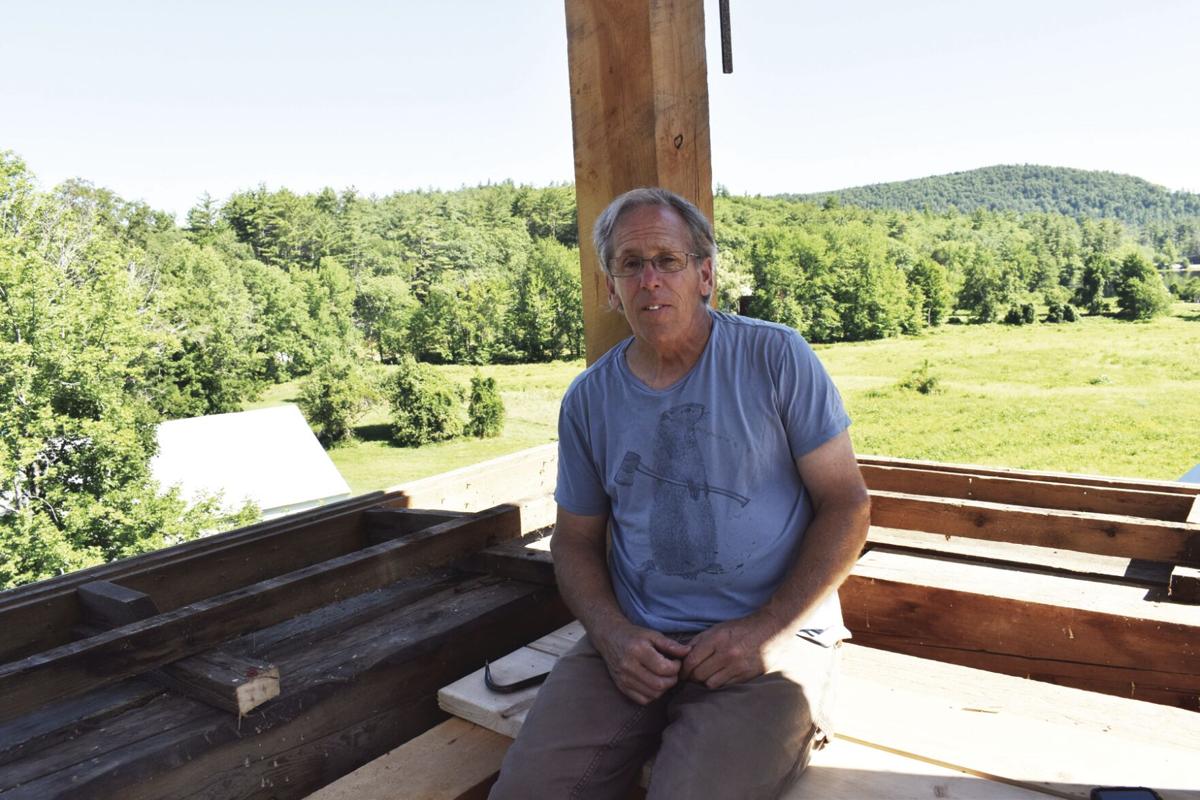 Carpenter Thomas Costello sits atop the Little White Church and discusses his progress with the Sun Friday. (DAYMOND STEER PHOTO)

A crane helps place the timber framing for the new steeple at the little white church in Eaton on July 31. (JAMIE GEMMITI PHOTO)

Carpenter Thomas Costello sits atop the Little White Church and discusses his progress with the Sun Friday. (DAYMOND STEER PHOTO)

EATON — As progress continues on rebuilding the steeple of the Little White Church, another change at the top is taking place at the 141-year-old Eaton landmark. John Hartman is stepping down as president.

Eleanor (Ele) Border was elected over the weekend by trustees to serve as interim president.

Border, whose professional background is in accounting and financial operations, served on the board from about 2013-16 but left for two years because her husband, John had to move for work. By 2018, they had returned to Eaton.

According to littlewhitechurch.com, the church is a non-denominational, non-profit organization governed by a board of local volunteers, officers and trustees. The donations received from church functions, weddings, religious and community events go toward the maintenance, insurance and continuing restoration of the church.

Problems with the steeple began in November 2018 with peeling paint. The following spring, water leaks were noticed in the sanctuary. Further investigation revealed the steeple’s main support poles had rotted up to 90 percent.

Border has been working with carpenter Thomas Costello to make sure the church repairs are going smoothly. She said the timber frame that will hold up the belfry went in last week.

Hartman said that Border is “an excellent, excellent person.

“The key to successful leadership is to leave an organization in better shape than you joined an organization,” said Hartman. “I think we have that situation with our leadership as well as the plans for the church going forward.”

Being president of the Little White Church is a time commitment, said Hartman, 76, who served for a dozen years in that capacity. He said his duties included turning on the heat, opening and closing the building, maintaining it and showing the church to people.

“When you’re president, you have to do everything you can’t get somebody else to do,” quipped Hartman. “So that’s usually a lot.”

Border will serve until the church can have its annual meeting, which was supposed to happen in early August but was postponed due to the COVID-19 pandemic.

The new president will be elected by church members who are Eaton residents and sign a registry book.

Former board member Quddus Snyder recently penned a letter to the Sun calling for Hartman to resign over alleged comments about gays and the Confederacy.

Hartman said there “absolutely is not” a connection between Snyder’s letter and his decision to step down. Hartman said he had been seeking to wind down his service for the past couple of years but wanted to see fundraising for the steeple reach its goal.

Now, he said he’s confident that it is going well.

“In fact, I emailed (Snyder) a month ago or more when he was asking for my resignation that I’m way ahead of him,” said Hartman. “I’ve already told the board I’m not planning on running beyond the termination of my term.”

The steeple carpenter, Costello of Eaton, is a former church president and organizer of the annual Christmas pageant. In fact, he said the goal is to have the steeple ready by Christmas.

“But when you are working with something like this, you don’t ever make promises,” he said. “You give yourself plenty of lead time — that way you don’t disappoint anyone.”

Costello said the belfry frame has been built and installed into the tower attic. “The belfry walls, or facade, has been restored and will be put into place when the belfry exterior roof deck, as well as the belfry floor and the bell itself are all in place.”

He said the bell has also been restored, “and a ringing ceremony will happen soon after it’s in place.”

Blue, treasurer of the board, said there’s a tremendous amount of enthusiasm for the steeple project.

“We can’t wait for it to be done because it’s such spirit of Eaton,” she said. “We need to be able to see that steeple and hear that bell.”

In addition, the church’s 1908 Steinway Model O grand piano is in the process of being refurbished at Encore Pianos in Franklin. The church’s leadership raised $25,000 for that project, and the piano could return to the building by late September.

“It’s going to be a wonderful instrument,” said Border of the piano. “This will be a very vibrant venue for musical events as well as community events.”

More changes: The stage is being stripped of carpeting and “refinished to its original glory,” said Blue, who said it will “really make a difference” in the acoustics.

While there aren’t any events going on during the renovations, not to mention the COVID-19 pandemic, Blue said the hope is to have their usual holiday events come December.

On top of all that, the church has an opportunity to acquire some land to build a parking lot so that attendees don’t have to park along Route 153.

It will take another capital campaign to buy the parcel.

Blue said that the goal for the steeple project was to raise $165,000 to cover any overages that might occur. She said that was met early this year.

Money was raised through a variety of methods, including a Dine to Donate fundraiser, yard sales and newsletter appeals. They even set up an account to accept gifts of stock that are immediately changed into currency because non-profits can’t also be investors.

“The fundraising was just mind-blowing,” said Blue, who said people contributed from all over the country.

“It was heartwarming and really a beautiful thing. And so many people stepped up and contributed generously to be able to get this steeple back up. ... That really did a lot to bring people in the community together.