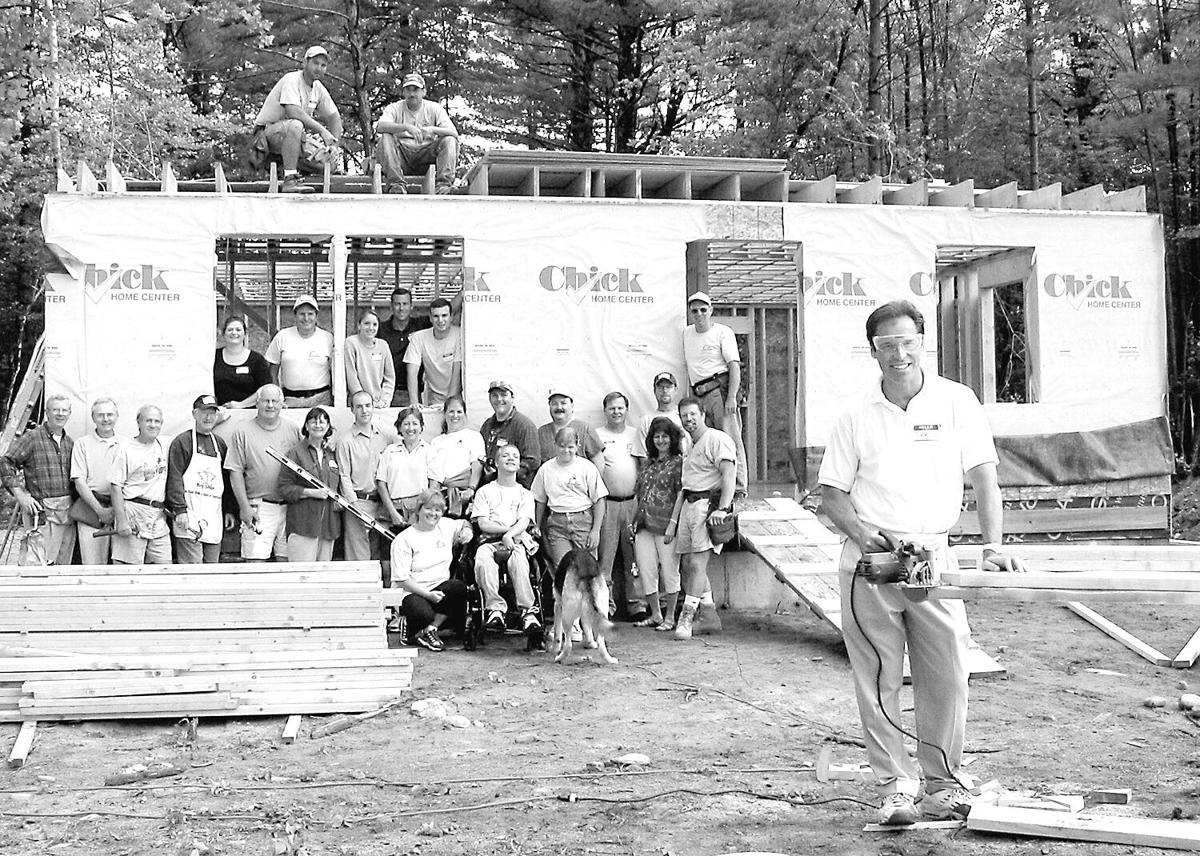 The late Jeff Lund is seen on top of the Habitat for Humanity house being built in 2003 in Madison (at left). In the foreground is then-Gov. Craig Benson. Lund’s friend and former boss Phil Halle is standing next to the ramp with his wife, Rose. (LLOYD JONES PHOTO) 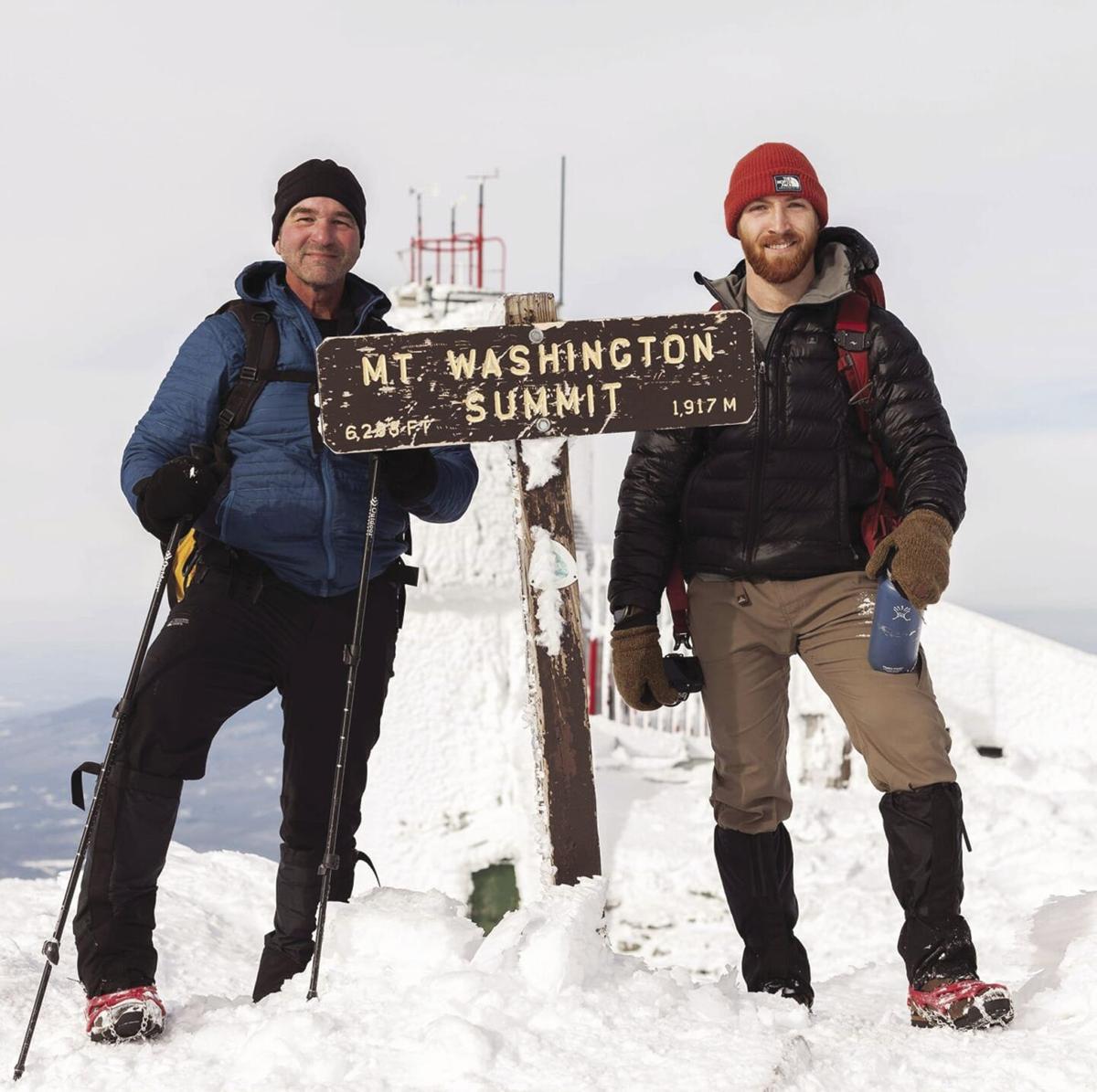 The late Jeffrey Lund (left) is seen with son Tyler after summiting Mount Washington in this undated photo. Lund was a master craftsman who worked for Summit Home Builders of Glen. His other son, Ryan Lund, graduated from Kennett High School last year. (FACEBOOK PHOTO)

The late Jeff Lund is seen on top of the Habitat for Humanity house being built in 2003 in Madison (at left). In the foreground is then-Gov. Craig Benson. Lund’s friend and former boss Phil Halle is standing next to the ramp with his wife, Rose. (LLOYD JONES PHOTO)

The late Jeffrey Lund (left) is seen with son Tyler after summiting Mount Washington in this undated photo. Lund was a master craftsman who worked for Summit Home Builders of Glen. His other son, Ryan Lund, graduated from Kennett High School last year. (FACEBOOK PHOTO)

CONWAY — The friend and boss of Conway’s Jeff Lund, who died in a car crash Sunday night, says he thought of Lund as a brother and remembers him as a loving father, passionate outdoorsman and a master craftsman.

Lund, 52, of Center Conway was killed when his vehicle hit a tree on Stark Road, according to police.

Officers responded at about 8 p.m. to a 911 call of a single-vehicle crash near Beechwood Drive, said Conway Police Lt. Suzanne Kelley-Scott.

Beechwood is about a quarter-mile south of Route 113 (East Main Street) in Center Conway.

A white 2012 Infinity G37X sedan had struck a tree on the west side of the roadway. The driver, who was the single occupant of the vehicle, was unresponsive, said Kelley-Scott. On Monday he was identified as Lund.

On Tuesday, the Sun spoke to Lund’s former boss, Phil Halle and “significant other,” Tammy Smith, who shared fond memories of Lund.

“He was not a physical brother, but he was a brother to me,” said Halle. “We got very close in the last 20 years.”

Lund, who was divorced, had two sons, Tyler, who is 23, and Ryan who is 19. Ryan graduated from Kennett High School last year.

Smith said she met Lund when both of their children attended Pine Tree School. Lund, she said, was “one of a kind. He was the most genuine person, with the purest heart. He was a selfless individual who would quietly help anyone without expecting anything in return.”

The night of his accident, Lund was on his way to Smith’s house, which was just down the road.

“He lived on Beechwood Drive. He was coming to my house,” she said. “I keep trying to understand what happened. Was it a medical emergency? I guess we will never know.”

Lund, she said, was born in Rome, N.Y., but grew up in Hudson, N.H., where he attended Alvirne High. He was a self-taught carpenter.

Halle, who said he and Lund frequently went biking together, said his friend loved to hike in the valley with his sons and also took a trip out west a with them a couple years ago.

Halle, owner of Summit Home Builders in Glen, hired Lund around 2001 as a carpenter and immediately saw potential in him. Over the years, Lund rose higher in the company and became project manager in 2014 and as such handled coordination of projects and logistics. The next year, Halle made Lund a business partner in a side company called HLM Construction, which did contract work for Summit. The L in the name stood for Lund. The H was for Halle and M was for Morneau (a third partner).

Halle said he hired Lund while building a 5,600-square-foot home for himself (Halle) in Intervale.

“We kind of at the time knew that he was definitely more than just a carpenter,” said Halle.

During morning business meetings, Lund was a “voice of reason,” and his opinion during debates normally carried the day.

Vendors, customers, lumber yards always enjoyed working with Lund because of his “extremely conscientious” demeanor and his diligence. Lund was never late on the job.

“So we build a house for somebody and then five years goes by and the customer would call us, saying, ‘Hey, I want to put an addition on the house,’ and the first thing they say is, ‘Does Jeff still work with you? We really want Jeff here,’” said Halle.

Lund helped build homes all over the valley and the county. “Jeff was a master craftsman. and he built 125 homes with us,” Halle said.

One of those projects was for Habitat for Humanity and caught the attention of then-Gov. Craig Benson in 2003.

Halle remembers Lund as a careful man who put safety first. Some of the job sites required care, said Halle, adding that one such job site was 80 feet off the ground. No one ever got hurt.

Halle said the accident took place only 500 feet from Lund’s home. “It just doesn’t make any sense,” he said.