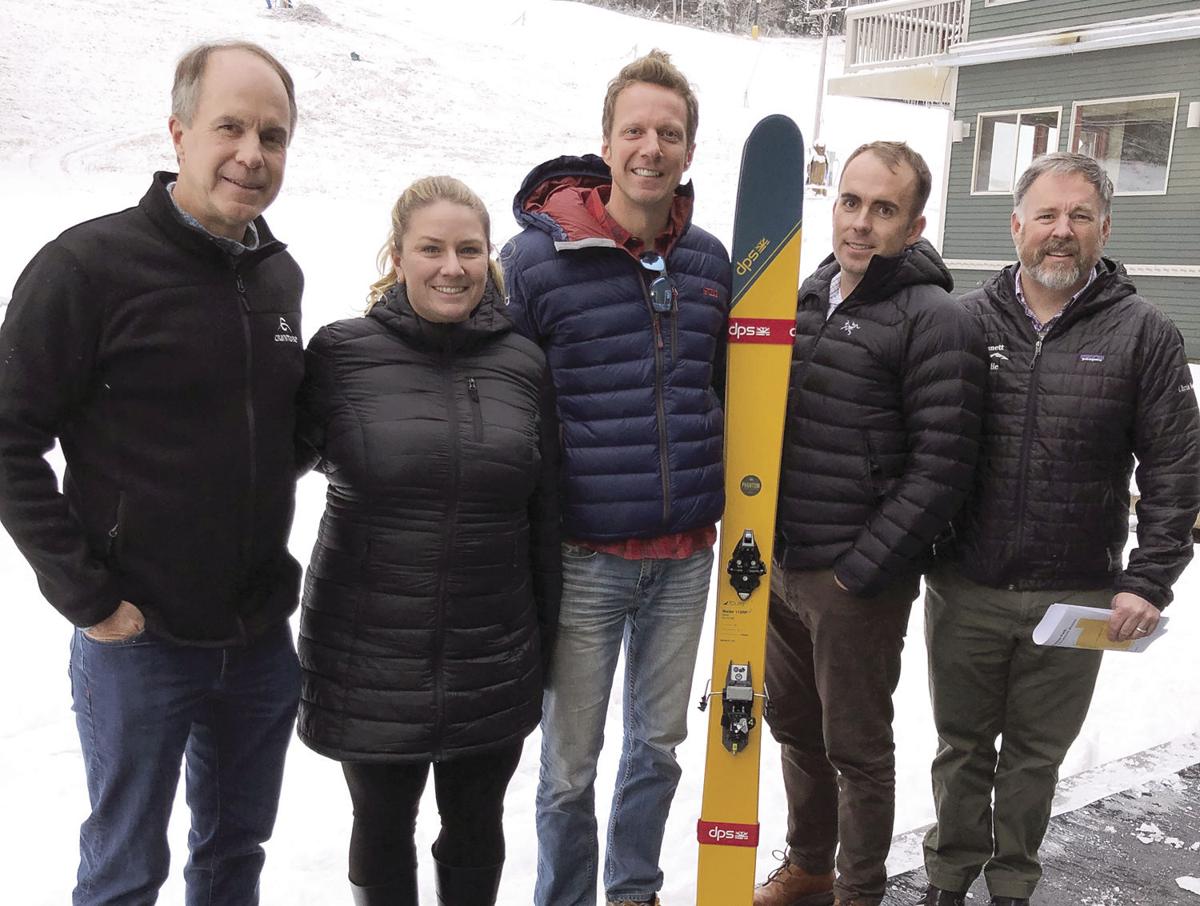 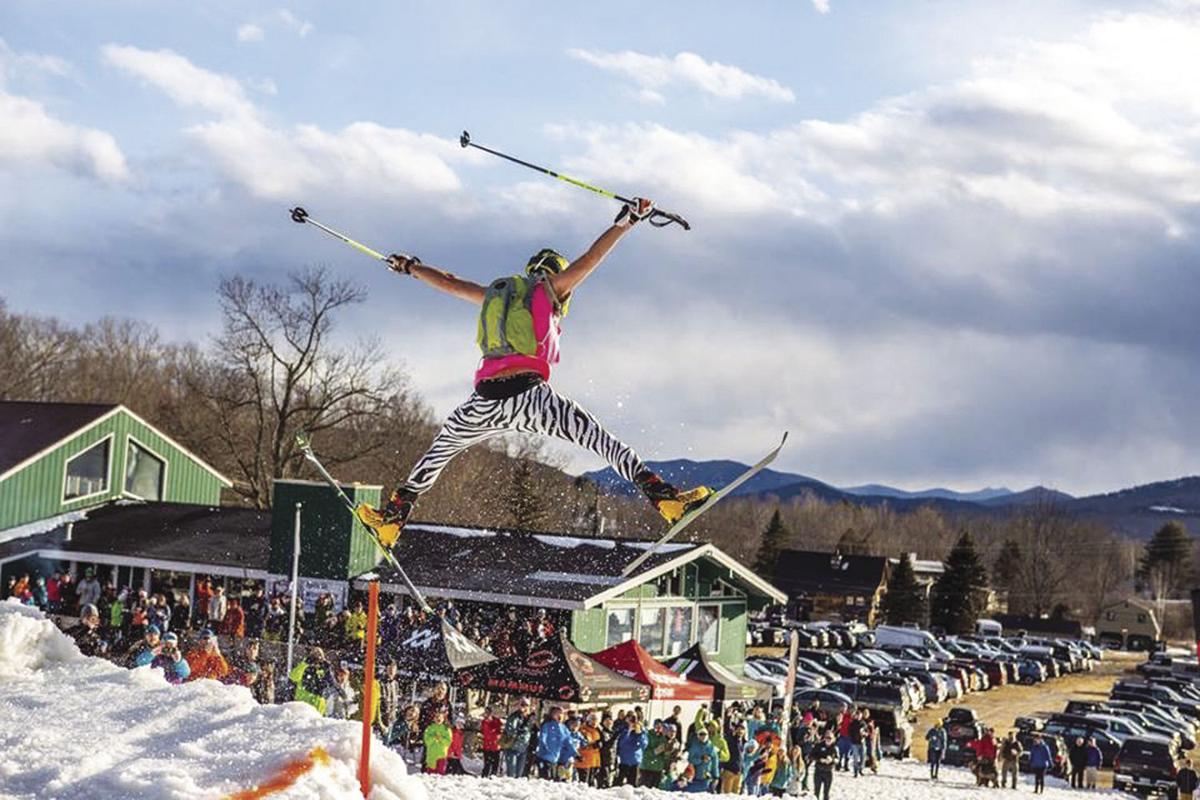 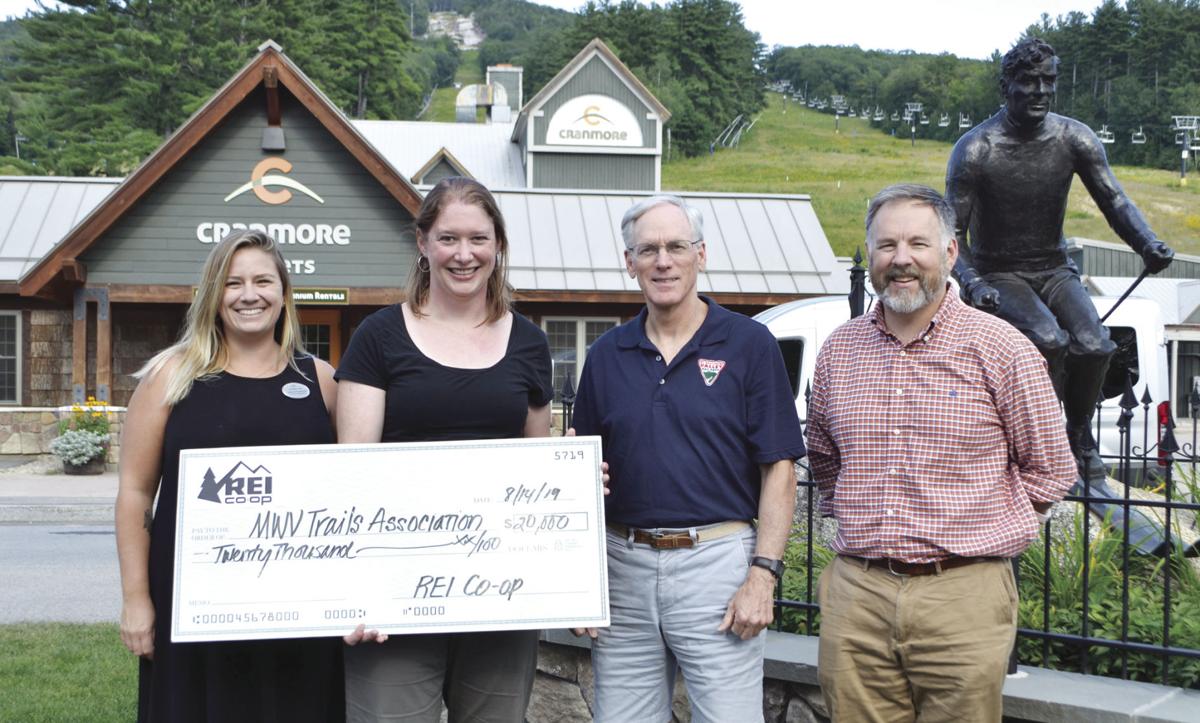 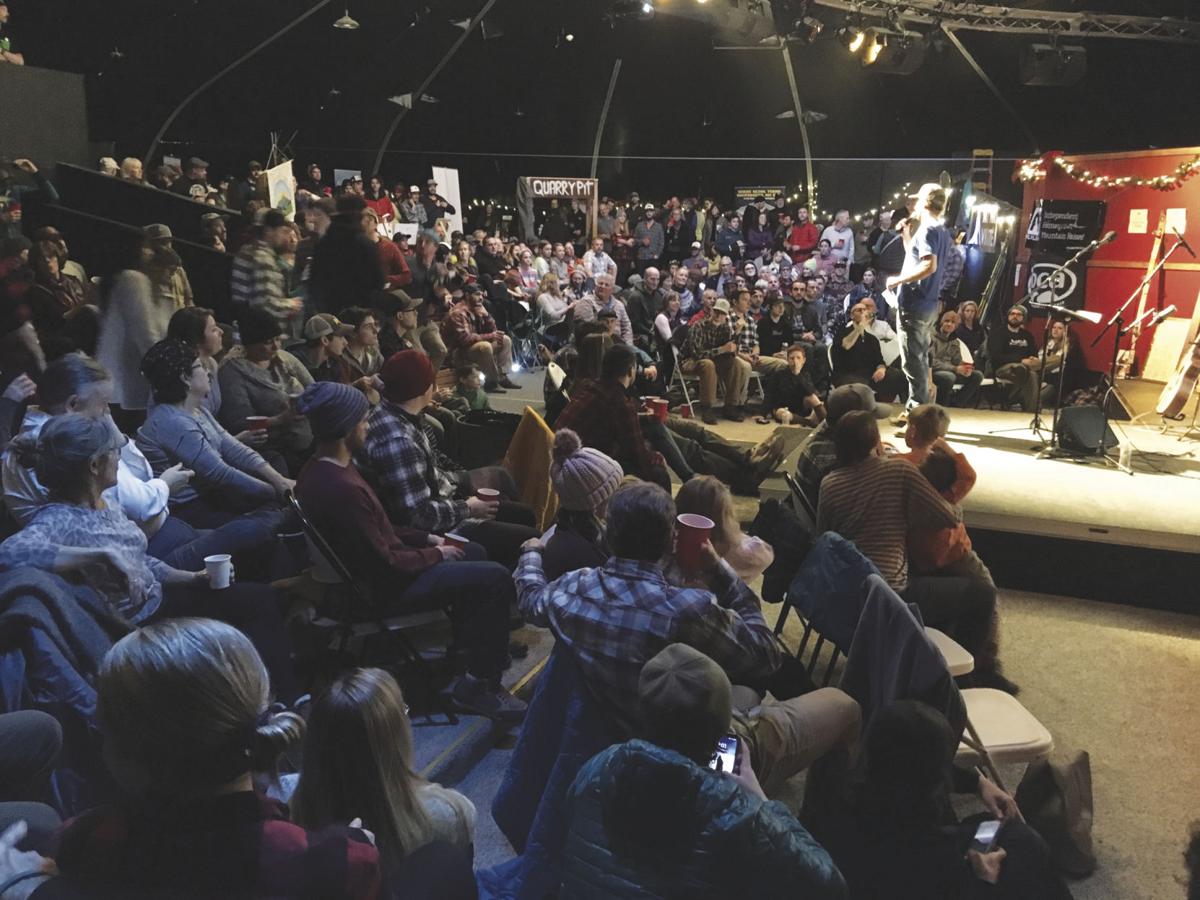 At the group's third annual backcountry film festival at Theater in the Wood in Intervale last year, Granite Backcountry Alliance President Tyler Ray (above) praised the work that the non-profit's volunteers had accomplished. (TOM EASTMAN PHOTO) 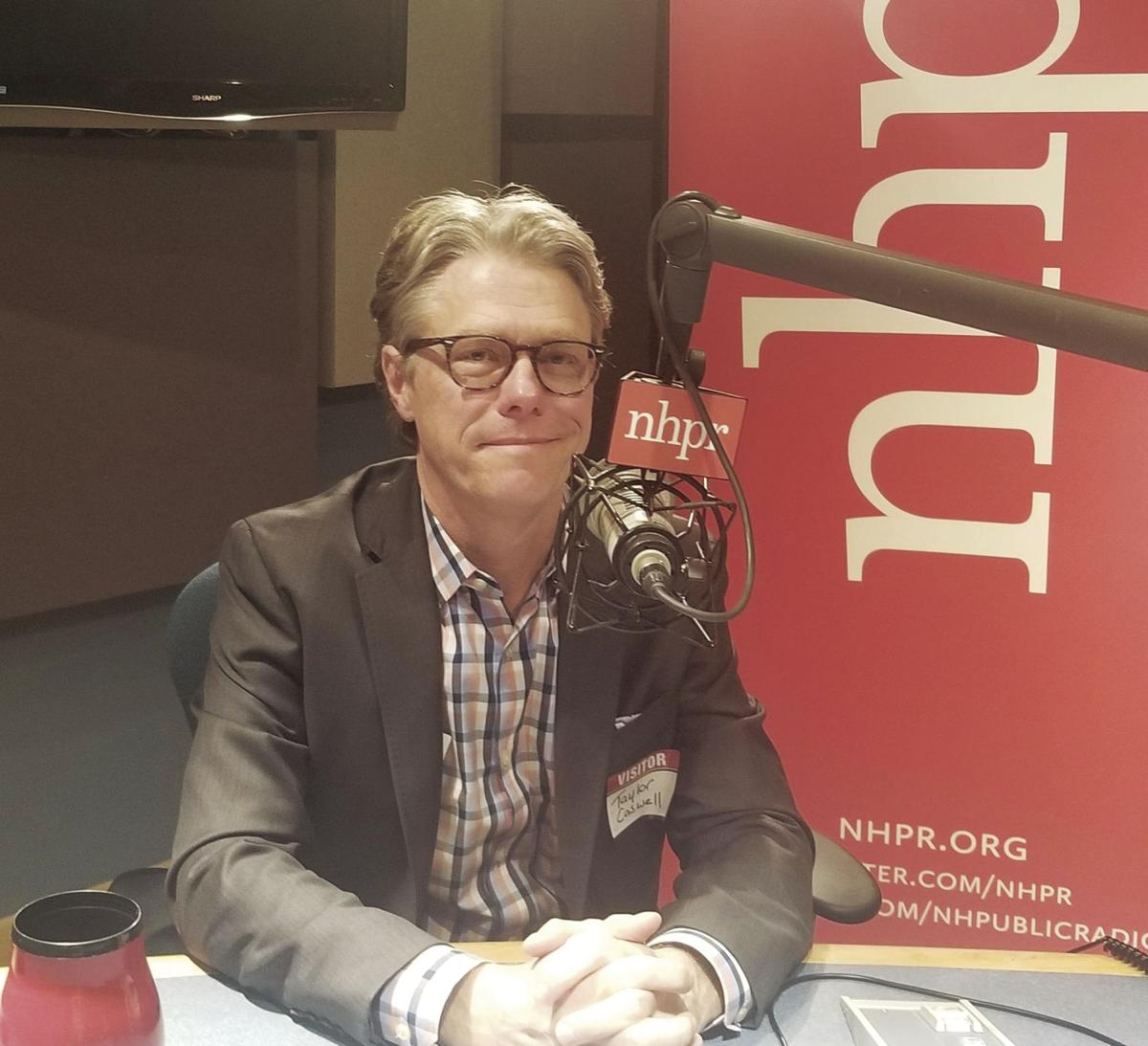 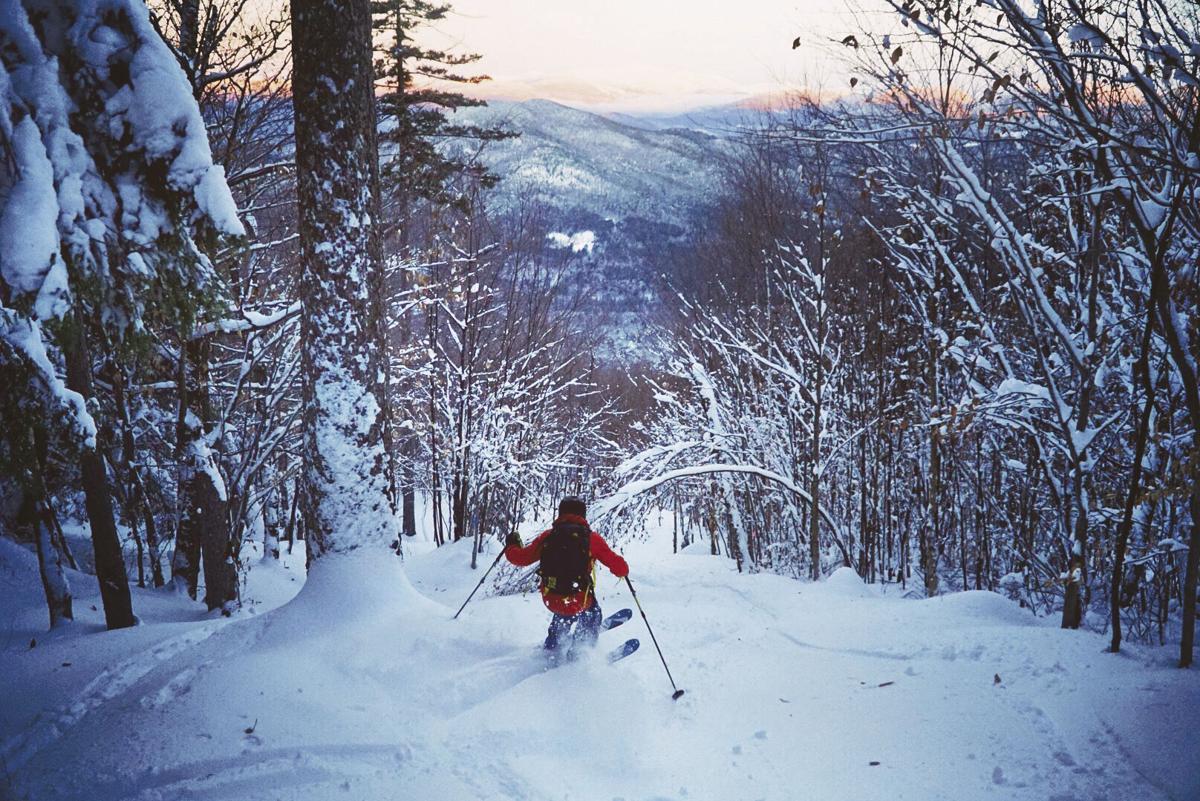 At the group's third annual backcountry film festival at Theater in the Wood in Intervale last year, Granite Backcountry Alliance President Tyler Ray (above) praised the work that the non-profit's volunteers had accomplished. (TOM EASTMAN PHOTO)

CONWAY — While the Mount Washington Valley has long been a mecca for skiers, hikers and more, a new collaborative approach is expanding our recreational offerings to outdoor enthusiasts like never before.

“What people are looking for nowadays, particularly millennials, is a life-experience driven lifestyle that is playing in the outdoors. It combines a life and work option that makes a lot of sense to lot of people,” said Tyler Ray, a 41-year-old lawyer who has used that technical knowledge to help work out easements and agreements with landowners and the U.S. Forest Service for backcountry skiing at Intervale’s Maple Villa and South Baldface in Chatham.

“North Conway has historically always had that outdoor culture, but it has been fragmented and somewhat piecemeal over time,” said Ray, whose Granite Backcountry Alliance is presenting its fourth annual Backcountry Film Festival tonight from 5-9 p.m. at Theater in the Wood in Intervale.

“Whether it’s mountain biking, summer swimming or backcountry skiing,” he said, “users, government and private businesses are seeing a more coordinated effort to pool together and bring people here not just in and out but to actually bridge the gap and have people stay here and become part of the area.”

His comments were backed by Taylor Caswell, state commissioner for the Department of Business and Economic Development, who noted that Gov. Chris Sununu this fall announced the creation of the nation’s 16th office of outdoor recreation.

The New Hampshire Office of Outdoor Recreation Industry Development will be housed in Caswell’s department, and its director will report directly to him. The bill had bipartisan support and got folded into the state’s two-year budget.

It is funded by a grant from the Northern Borders Commission, which fosters economic development in the four-state region of northern New York, Vermont, New Hampshire and Maine.

Make no mistake — outdoor recreation is big business nationally and in the Granite State.

Snowmobiling and ATV use are part of that outdoor use, and are integral to the economy, especially in northern parts of the state, said Caswell, a Littleton native.

Mountain biking is another sport that is really taking off in the valley. And North Conway’s Cranmore Mountain Resort is not only adding three lift-serviced mountain bike trails off the South Slope next summer, it also is serving as a hub for bike trails being planned by the local New England Mountain Bike Association chapter and will be the northern terminus of the Mount Washington Valley Rec Path, the paved 2.9-mile path that will extend south to Walmart initially and then beyond.

“New Hampshire’s low-tax environment and booming economy are a beacon for business in the Northeast,” said Sununu.

The new Office of Outdoor Recreation Industry Development, Sununu said, “will allow us to better leverage the tremendous outdoor recreation opportunities we have here in the Granite State not only to grow the industry but attract the workforce of the future.”

Sununu repeated that message in a visit earlier this month to North Conway’s new REI Co-op store, where he praised the company for making New Hampshire a better place in which to live.

“What REI has created right here in North Conway is so unique, and it’s finally getting into that 21st-century model of not just being a retail store but a retail store that gets fully immersed into the experience.

“To have that here and to have one of the only ones like this around is a huge opportunity to us,” Sununu said.

Ray helped coordinate that visit and accompanied the governor.

Seattle-based REI made an immediate impact shortly after announcing it was opening its 24,779-square-foot store in North Conway’s Settlers Crossing. It hosted a fair for local conservation and outdoor non-profits and made contributions to many local groups, including $20,000 to the MWV Rec Path that is planned to be built over the next few years; $7,500 to NEMBA to update trail maps for local mountain biking trails; and even underwriting yoga classes in North Conway’s Schouler Park.

“I think it’s great that the groups are working together under the auspices of the White Mountain Trail Collective,” said IME’s Rick Wilcox. “There are so many activities for every season.”

IME has its International Mountain Climbing School, and EMS also has a climbing school.

The Mt. Washington Valley Chamber of Commerce is working to develop outdoor athletic events for spring to help build that traditionally slower season.

Fishing and hunting also are part of the picture, represented by such groups as the Carroll County Fish and Game Club in Madison and Saco Valley Anglers, a chapter of the national Trout Unlimited.

Groups such as these, along with Conway-based Ski NH, the U.S. Forest Service and Appalachian Mountain Club, agree that one key to increasing and enhancing outdoor recreation is to disperse use to less-concentrated areas, no matter what the sport: mountain biking, backcountry skiing, hiking or swimming.

The REI store is now leading the charge on giving back to help maintain the resources while educating people how to enjoy the outdoors, long also a goal of such groups as Albany’s Tin Mountain Conservation Center.

Shannon Hanley, store manager for REI, said the co-op annually gives more than 70 percent of its profits back to the outdoor community through member dividends, employee retirement contributions and investment in non-profit partners. In 2018, REI invested $8.4 million to 431 non-profits across the country.

REI also has given $200,000 over the past three years to the National Forest Foundation to support trail restoration work along the Crawford Path, the nation’s oldest continuously maintained recreational path at 200 years old — a project that was overseen by the U.S. Forest Service the first year and by the White Mountain Trail Collective this past year.

REI and the Trail Collective also will be assisting in upcoming trail projects in the valley, with Melanie Luce, the collective’s executive director, outlining several projects the collective (wmtrailcollective.org) of Plymouth will be undertaking with local groups.

The White Mountain National Forest’s Saco District also will be working in 2021 with the trail collective on rock work on Kearsarge North and check dams, according to Cristin Bailey, Saco District Trails Project.

As a 20-year veteran of local trails work, initially with the Appalachain Mountain Club and the past 15 years at the Saco District as trails manager, Bailey applauded local collaboration among trails groups under the umbrella of the Trail Collective.

“The trail work here is a huge part of the history and the culture (of the area), and it is nice to see everyone come together and look at things a different way and to work together makes sense,” said Bailey, who oversaw the first year of the two-year Crawford Path restoration in 2018.

Formed in 2017, the non-profit Trail Collective’s goal is to “Protect the Trails. Preserve the Legacy.” Comprised of user groups such as the AMC, the Randolph Mountain Club and the White Mountain National Forest, the organization is supported by private donors, with REI giving funds to the Northern Forest Foundation which in turn supported the Crawford Path restoration.

According to Chris Meier of the MWV Rec Path, “We always had the infrastructure with our various outdoor amenities. But now we are working together, trying to build the culture as it relates to this.”

He said the rec path will serve as a springboard to a variety of uses.

He said it will be like a “spine” that will lead to other attractions. Young families can use the paved path. Hikers can access trails. Mountain bikers can venture off it to new trails being built or improved. Cranmore will have its three new beginner and intermediate mountain biking trails.

Meanwhile, areas like Attitash and Bretton Woods will continue to offer lift-serviced biking as well.

In winter, there is fat biking, ski touring and snowmobiling to go along with alpine skiing. It all adds up to a lively mix of year-round outdoor activities.

“All these user groups co-exist in town — we have a vibrant energy, and it’s great to have opportunities to celebrate that,” said Ray.

“Collectively, we are an outdoor community, and it’s important to recognize that. As Chris (Meier) said, what we are seeing is the evolution of the outdoor economy, and that is good for the community to utilize its assets and to have municipalities, businesses and users all working together.”

Factor in the recent purchase of Attitash and Wildcat by Vail Resorts and the added attention from skiers nationwide that brings, along with improvements at local alpine and ski touring centers, and it is clear to see that, to quote Jerry Lee Lewis, “there is a whole lotta shakin’ going on” in the valley when it comes to outdoor recreation and coordinating it to enhance what is here.

As Ray summarized, “It’s a really exciting time to be in the valley (for those who love the outdoors and either come to visit or who love to play where they work).”

Terrific article about wonderful coordination in the Valley toward seeing the gold in the Whites. The outdoors is "in", and the Valley will have many happy years ahead by recognizing that. Of course, for many of us, the outdoors has always been "in," but it's great to spread the enthusiasm and encourage like-minded Valley folk to share the spirit. Thanks for this great summary of what has been gestating, even if the article could not mention every partner like the White Mountain Milers, the ski race nurture programs at King Pine, Cranmore and beyond, the pioneering work of Andrew Drummond with Ski the Whites and in skin skiing generally at Black, and many more examples too numerous to mention. Kudos to one and all.