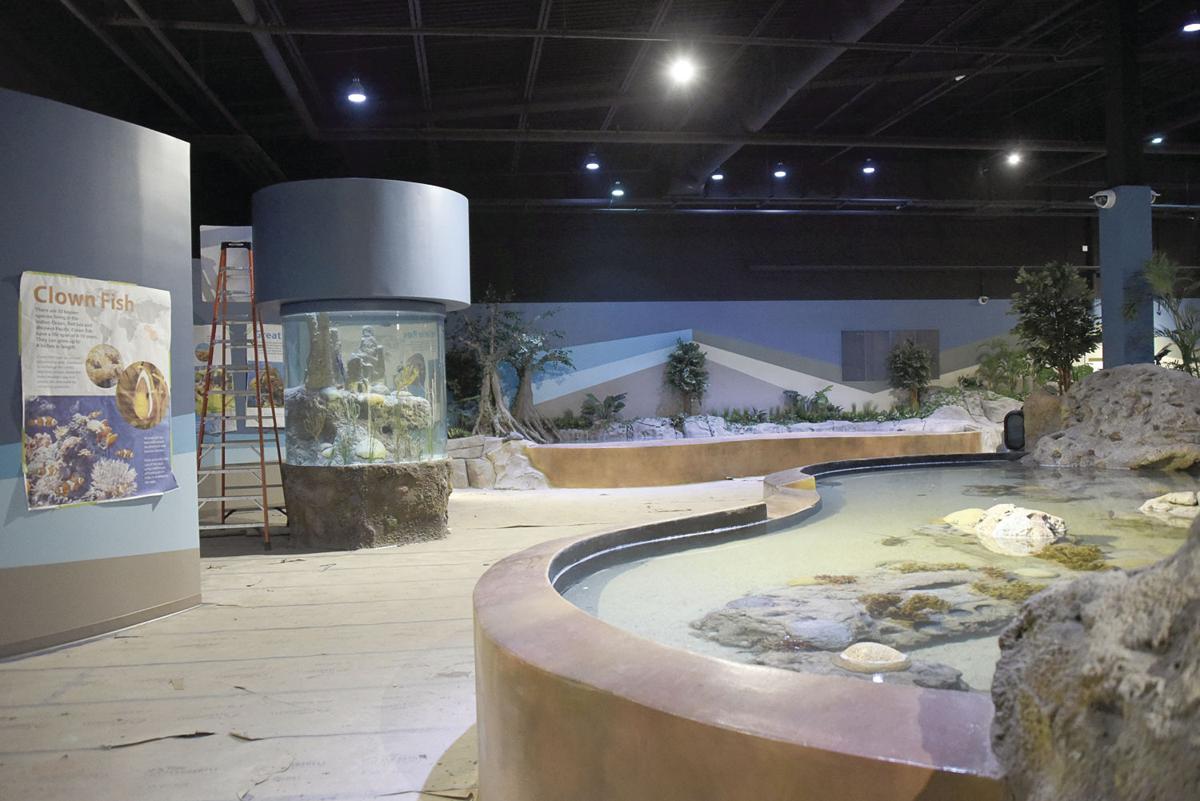 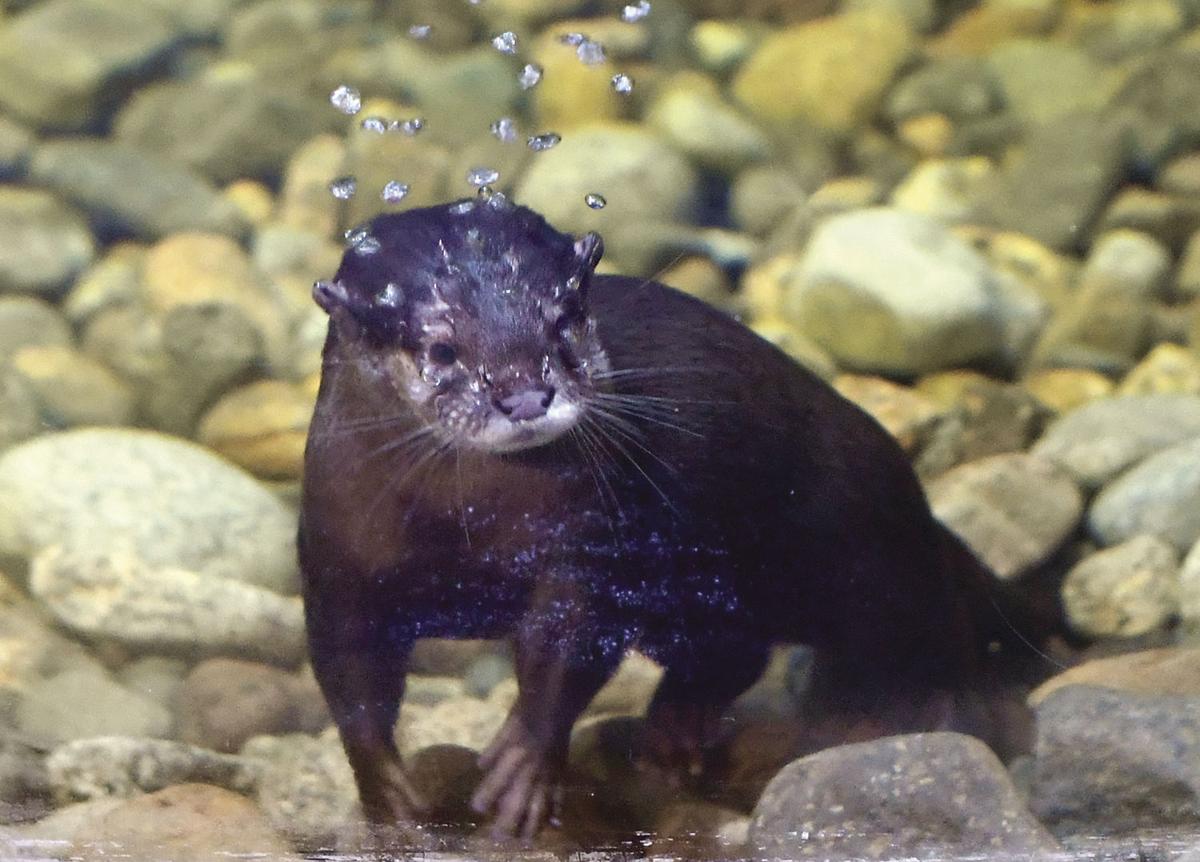 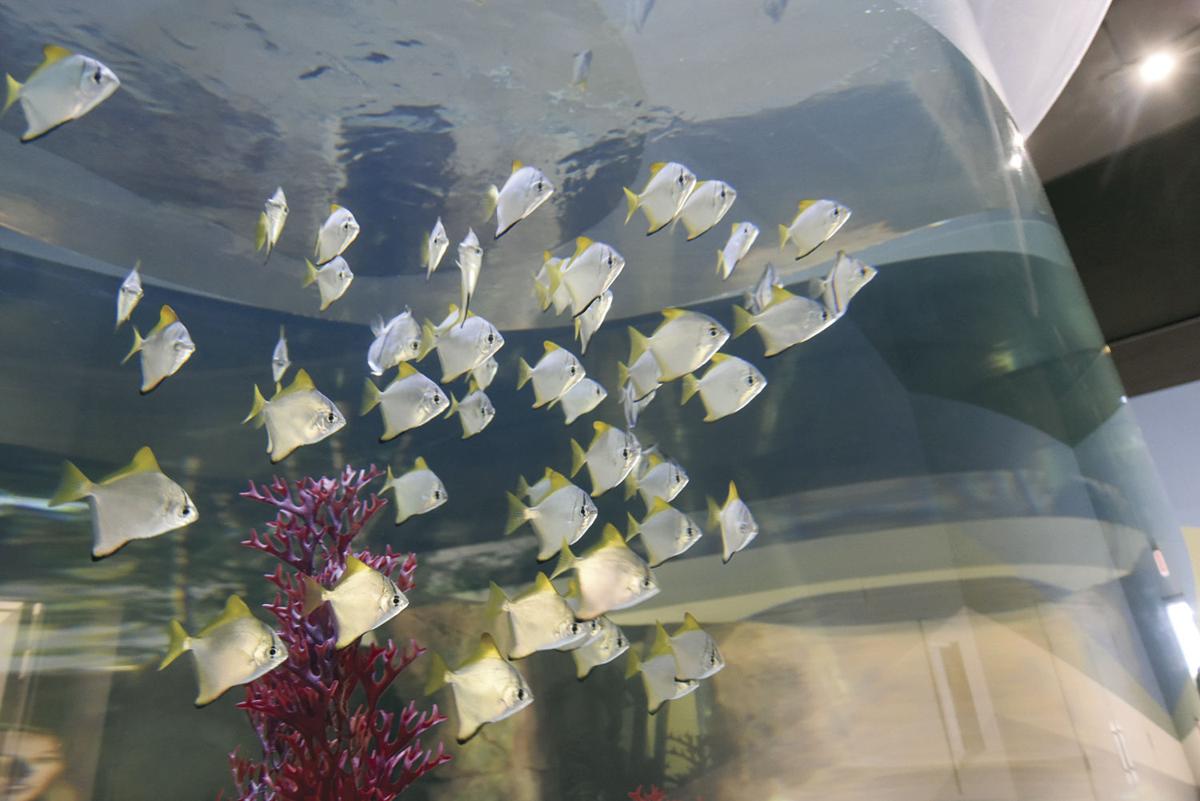 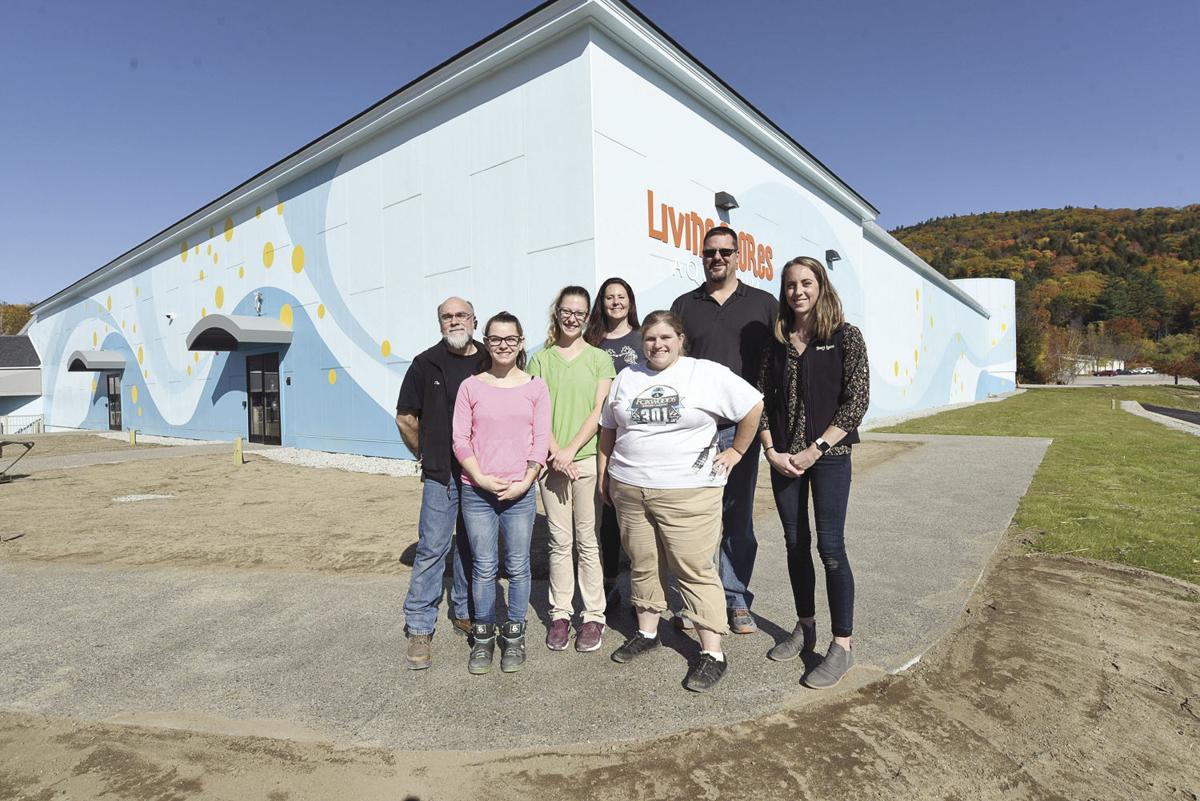 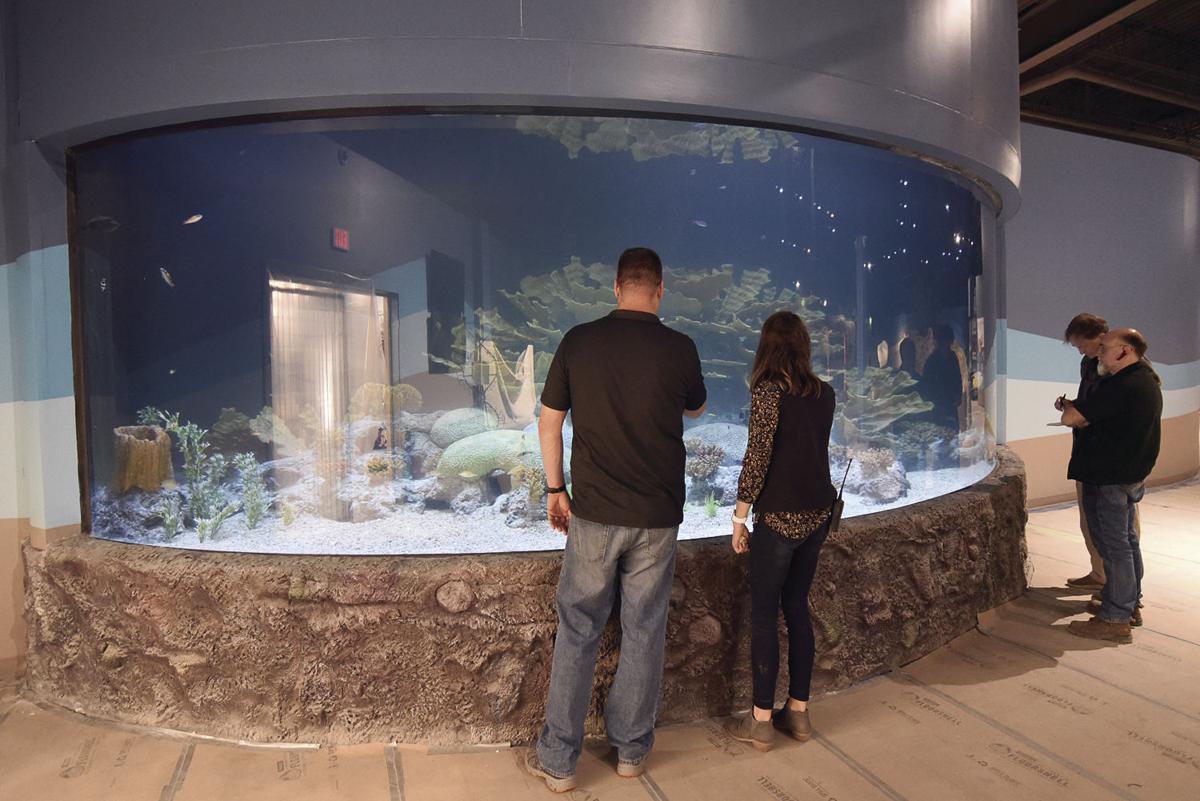 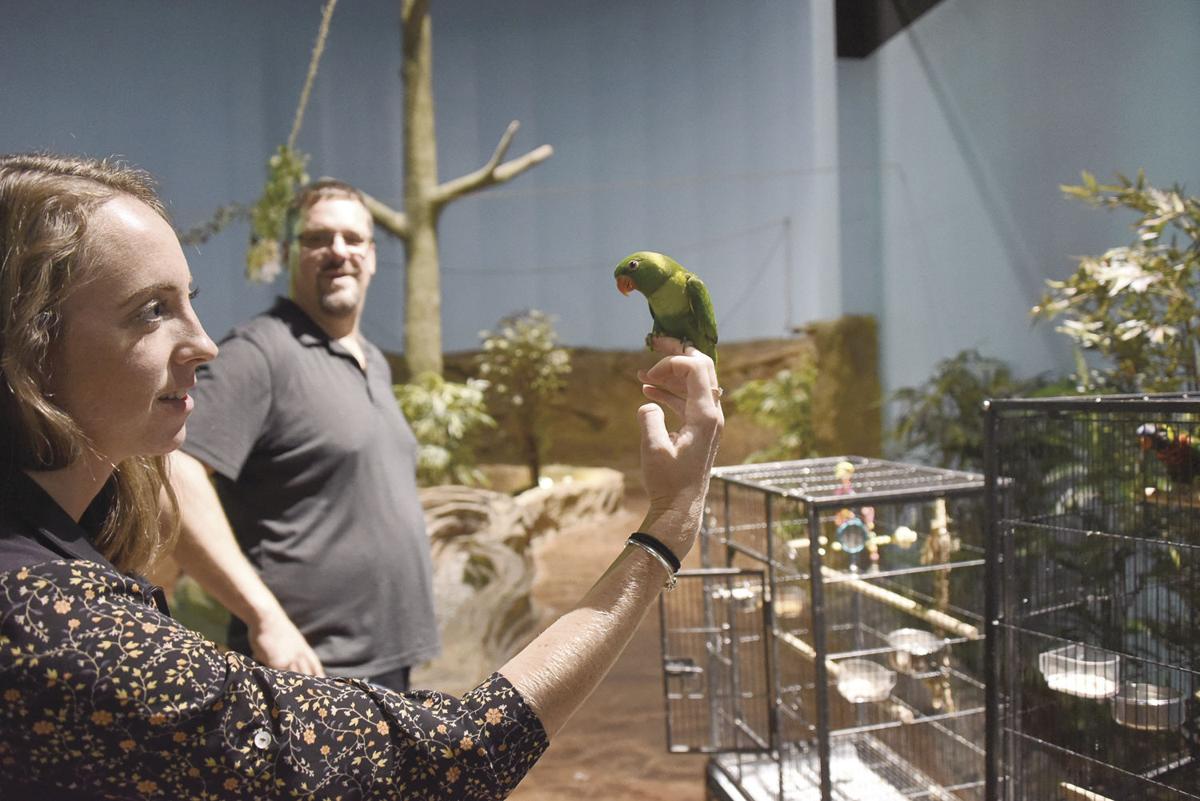 GLEN — Set to splash down next week in the Mount Washington Valley is Living Shores Aquarium, located just north of sister attraction Story Land on Route 16 in Glen.

It will be a year-round attraction, seven days a week, when it opens next Monday, Nov. 4.

The aquarium is located in what was once Heritage New Hampshire, a history-themed attraction that closed its doors after former owner Stoney Morrell’s passing in 2006.

After the building sat vacant for years, speculation ran rampant about what Palace Entertainment, which purchased Story Land and the Heritage site in 2009, would do with it.

They let the fish out of the tank, so to speak, in February 2018, announcing plans to build an aquarium in former attraction that Bob and Ruth Morrell had opened in the bicentennial summer of 1976.

Work has been underway for a year and a half; birds were brought in this past April, and the fish and mammals a month ago.

As a year-round daily operation, it will usher in a new era in local tourism.

“I think Bob Morrell would have appreciated the creativity and ingenuity involved with this project, and of our bringing this to the valley,” Story Land-Living Shores Aquarium General Manager Eric Dziedzic said recently.

Dziedzic and Hawkins noted that Morrell (1920-98) was a founding member of the Mount Washington Valley chapter of Habitat for Humanity, which is celebrating its 25th anniversary with a gala tonight at the aquarium (for more on Habitat, see story on page 10).

“Bob Morrell was huge in the start of Habitat. The fact they are going to hold their event here gives me goose bumps,” said Dziedzic.

“People are very excited to see the aquarium, so this was a neat way to celebrate MWV Habitat for Humanity’s 25th and to pay tribute to some of the founders, such as Al Risch, Ted Pettengill and Bob Morrell,” said Hawkins, who also sits on the Habitat board of directors.

Design work on the aquarium started in 2016; construction began in 2018 and continued right up to this week, Dziedzic said, adding, “We used local contractors, but the general contractor was us. We basically gutted the interior.

“The goal is to create something that is educational and entertaining, that is very hands-on,” he said. “It’s all about bringing real-life experiences to children, and I think we’ve hit it right on the head.”

Asked how Story Land and Living Shores complement one another, Dziedzic said the aquarium “will bring science to Story Land. The two businesses, I think, go hand in hand: You’ve got Story Land, ‘where fantasy lives,’ and then you bring the reality into it by bringing them here for hands-on science.”

Charyl Reardon, president of the White Mountains Attractions Association, said Living Shores adds much to the region’s array of amenities.

“Our area is fortunate to have businesses like Story Land that recognize investment into their properties and communities as being vital to the economic growth in the White Mountains and the tourism industry,” Reardon said.

While Story Land has “played an important role providing visitors with a memorable experience, Living Shores is an innovative mix of entertainment and education,” she said, adding, “We are very excited about the addition of Living Shores, a weatherproof year-round attraction, to the area, knowing that it will add to our destination’s appeal and offer a positive experience for local and visiting people.”

Upon entering the 32,000-square-foot building and encountering the admissions desk and pick-up spot for photos taken with sharks and other marine life, visitors will see many educational displays.

Signage will display educational messages about what fish is presented and about their habitat, said Dziedzic, who hosted a recent tour, pointing to a 1,050-gallon exhibit that held silver moony fish, a species native to the western Pacific and Indian Oceans.

According to David Houghton, Living Shores’ curator, “What’s unique about these is they can tolerate freshwater. So I can vary the salinity all the way down.”

A veteran of 23 years in the aquarium industry, most recently of Sea Life in Charlotte, N.C., Houghton said he “started as a fish guy,” but over the years, his resume has grown to include all areas of care and study: “fish, amphibians, reptiles, birds and mammals. ... So, it’s all the species we’ve got here.”

Next up on the tour was the largest tank in the aquarium. At roughly 25,000 gallons, it holds freshwater New Hampshire fish species and is one of the aquarium’s nine tanks.

In keeping with Living Shores’ quest to be interactive and educational, the freshwater exhibit, like others, allows viewers to get up close to the fish.

The display is meant to excite, inform and engage viewers of all ages, Dziedzic said.

“I could spend hours here, looking at this exhibit,” he said.

“You look at the depths and the layers. You look down below, and you’ll see a catfish near the bottom. Then you’ll look up and see a pickerel on top. You can be looking at the aquarium for 20 minutes and then notice that there was a fish down there that you didn’t even know was there. I love it!”

He noted that until this point in his life, he had not been a “fish nerd” — but now he is. “I’ve always been a (roller) coaster nerd until now, not a science or nature nerd. But now I am!”

Elsewhere, a 1,050-gallon trout tank holds 12 trout (rainbow, brook and brown), along with an educational panel.

The tanks feature colored blown concrete formations, made to resemble reefs and rocks.

The old Heritage was known for its replica of the Old Man of the Mountains, and longtime Heritage fans will be happy to know there is now a replica in concrete made to resemble rock of the craggy Old Man profile.

In addition to, obviously, fish, Living Shores Aquarium is also home to an aviary, known as the Rain Forest.

He also pointed to a glassed-in area that will be home to a python and a boa constrictor, along with educational displays about snakes.

“All of our species are captive-born and captive-raised,” said Dziedzic. “So, the fish you saw earlier on the tour are smaller now, but they will grow. You may have a 5-pound bass eventually in that tank.”

“Guests will be able to purchase little cups of nectar to feed the birds,” added Hawkins. “Same as when you get to the stingrays, there will be small fish to feed them.”

“They’re very animated. They’ll come to the surface and splash you,” said Hawkins.

“A guitar fish is a species of ray; all stingrays are rays, but not all rays are stingrays. The difference is the barb,” said Houghton.

Another part of the tank holds nibble fish, said to be popular in Japan for manicures.

“We have a total of five touch tanks, including the three that includes the rays,” said Houghton.

Another display area holds a 7,000-gallon pond for six small-clawed Asian sea otters, which are also very animated. “They’re very playful,” said Houghton. “The water in their pond is kept at 85-90 degrees.”

The third part of that section is an area for giant hermit crabs, spiny lobsters, horseshoe crabs and other kinds of crabs, which could be seen scurrying about, intent on getting to wherever crabs go.

Another tank holds 11 sharks, which will grow from a foot in length to around 4 feet. “They are brown-banded bamboo sharks and white-spotted bamboo sharks,” said Houghton. “Once they get bigger, you’ll be able to touch them — which is the main goal of this aquarium,” said Hawkins.

(In case you’re worried about losing digits, according to Wikipedia, “this small, mostly nocturnal species is harmless to humans. The white-spotted bamboo shark is occasionally kept as a pet in larger home aquaria.”)

There is also a 9,500-gallon Caribbean Elkhorn Reef tank, which features such species as a French angel, a regal queen angel, a Caribbean spotted moray eel and a porcupine puffer.

“He is the most adorable fish we have,” beamed Hawkins of the latter, as the large fish pouted up to the tank.

Throughout Living Shores Aquarium, the floors of the walkways are painted deep turquoise blue, made to resemble the ocean, while the lobby is brown.

The temperature in the climate-controlled hall and fish tanks will allow the fish, wildlife and birds to have nice living conditions no matter how frigid our North Country winters get.

Dziedzic, Hawkins and Houghton noted that the staff at Living Shores Aquarium all have degrees in biology and love working with fish and wildlife.

Hawkins said the attraction is already working with schools to bring in school groups to avail themselves of the hands-on educational experiences available there.

In addition to the displays, Living Shores includes a gift shop, offering a variety of animal, bird and fish-themed novelty items and games, and a quick service restaurant with a full bar. Pasta Mia will open soon after Nov 4.

Additional interactive activities will be “draw alive,” a virtual aquarium that will allow patrons to color a fish, add their name and then become animated on a screen.

“You’ll color and put your name on the fish and pop it into the scanner, and then you will see it on the screen swimming around with all the other fish,” said Dziedzic, adding there will also be an interactive sandbox offering all sorts of hands-on fun experiences and treasures.

In addition to Story Land and Living Shores, Palace Entertainment also operates Kennywood in Pennsylvania, Splish Splash waterpark in New York, Raging Waters in California and many other family destinations across 10 states and two countries, as well as the Miami Seaquarium in Florida and Sea Life Park in Hawaii.

on a rainy day in the summer when kids can't go to storyland this place will be printing money.