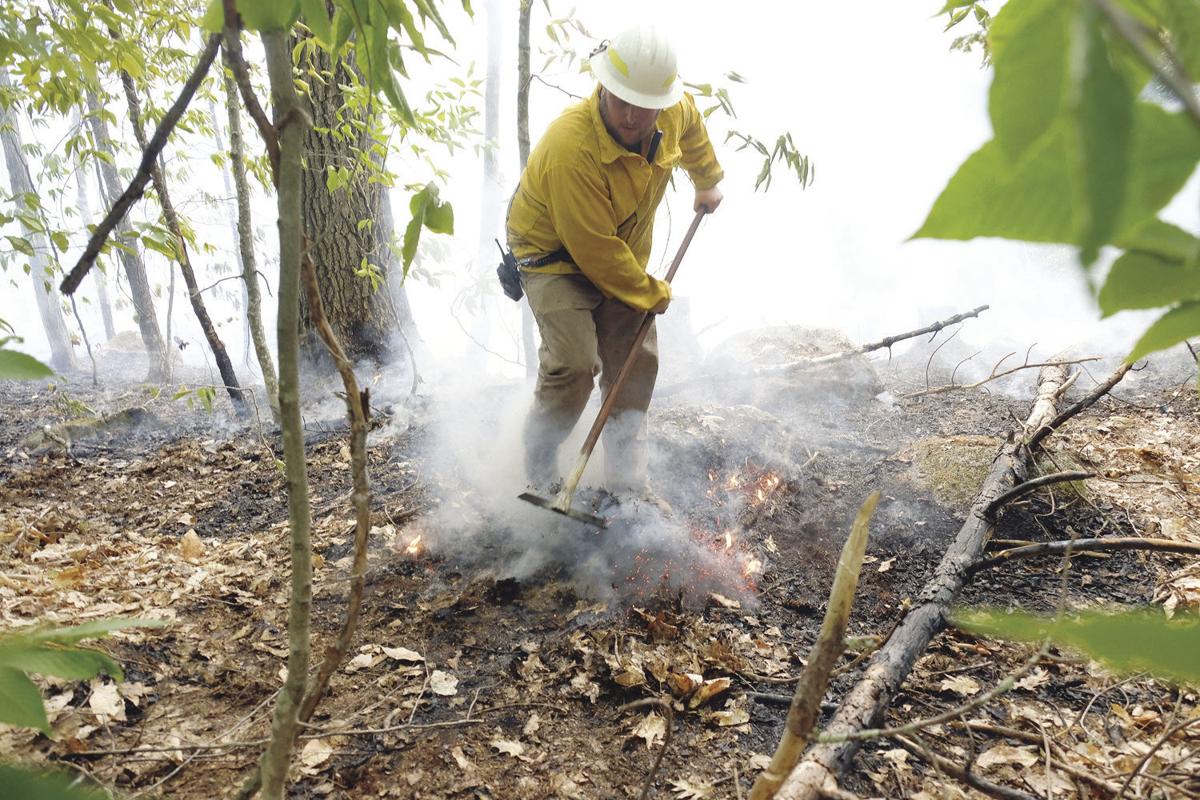 Freedom fire department’s Deputy Chief Eric Seamans works on raking out a fire line as crews at a forest fire near Durgin Pond off of Lead Mine Road in Madison on Sunday. (JAMIE GEMMITI PHOTO) 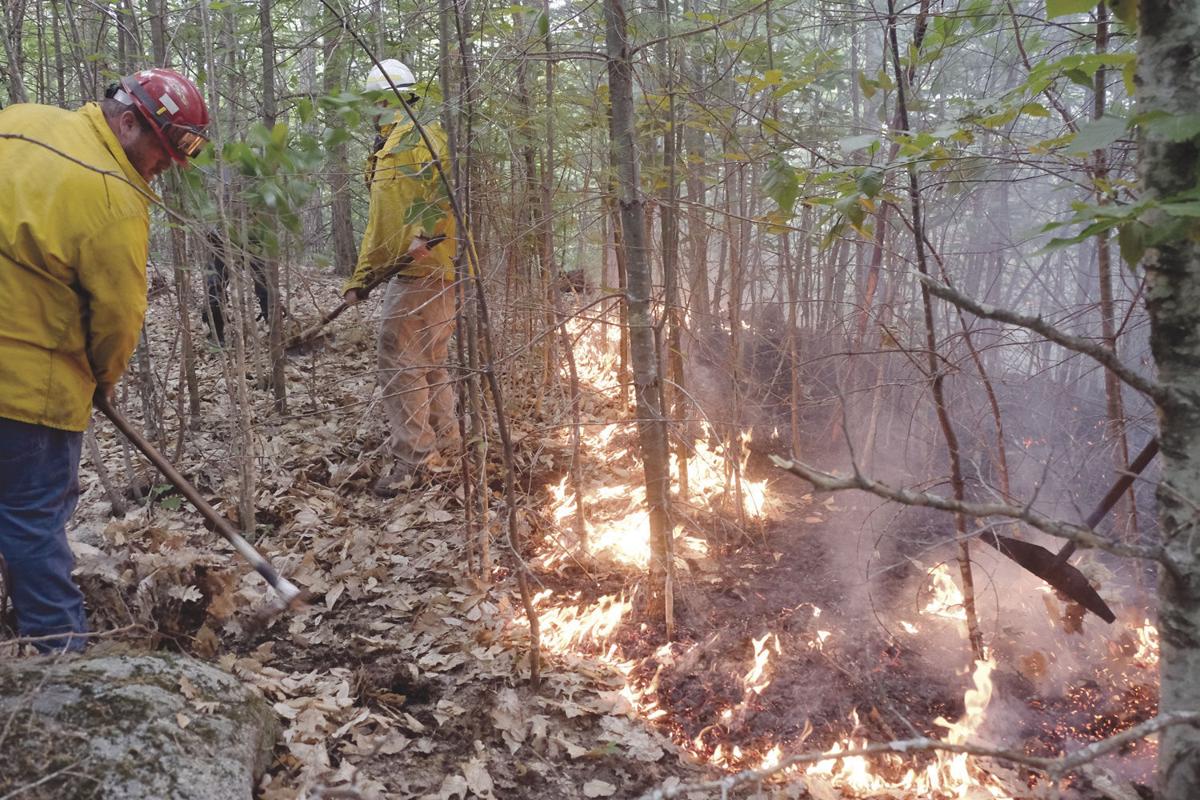 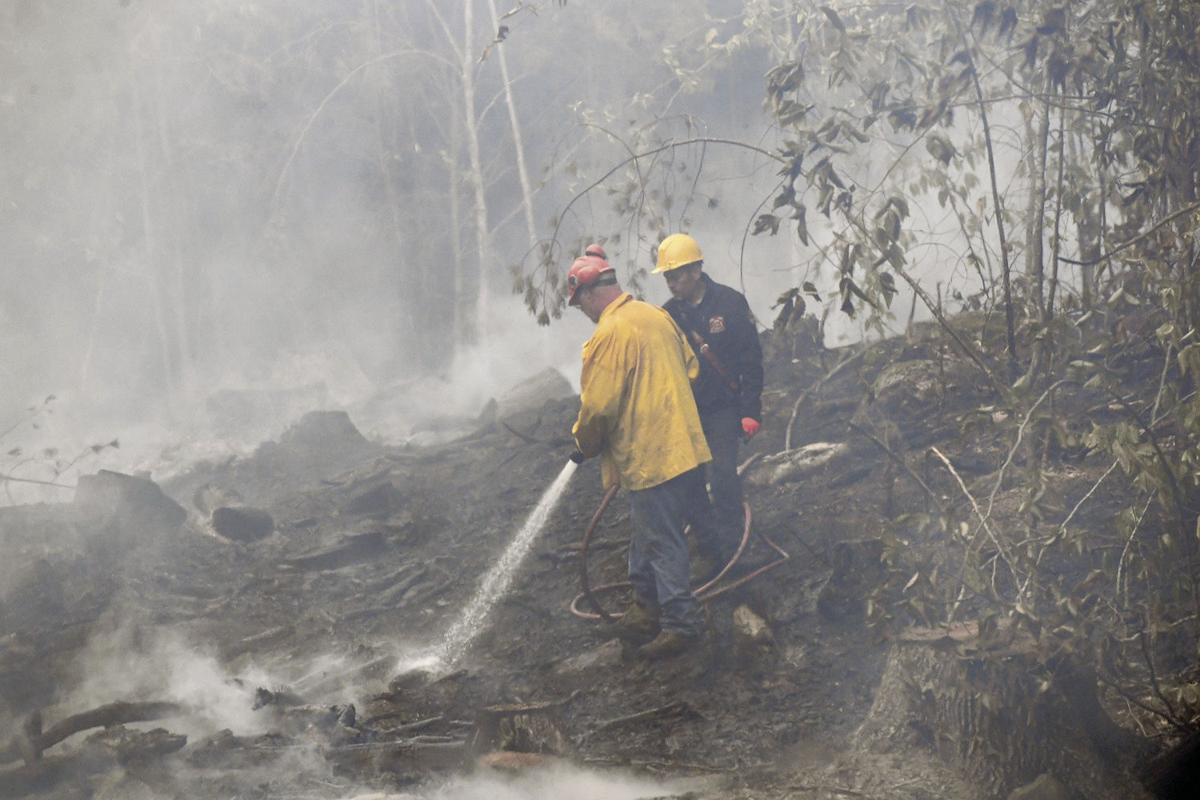 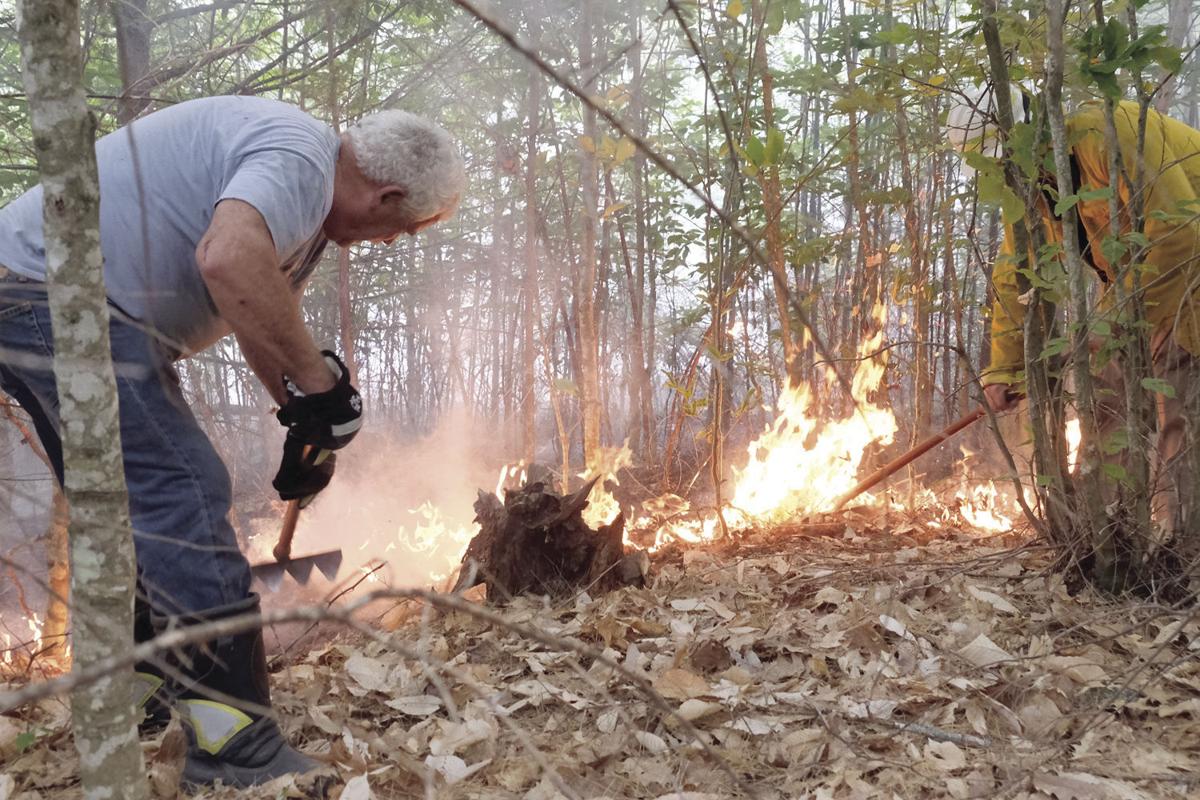 Freedom fire department’s Deputy Chief Eric Seamans works on raking out a fire line as crews at a forest fire near Durgin Pond off of Lead Mine Road in Madison on Sunday. (JAMIE GEMMITI PHOTO)

One strike burned about an acre of woods off of Lead Mine Road. The other damaged a rental home at 72 Eidelweiss Drive.

Thankfully, neither fire resulted in injuries.

The first strike reportedly took place around 4:15 p.m. Sunday about a mile into the woods at a logging operation.

About 30 firefighters from multiple agencies responded. It took hours to put out the flames, with crews clearing the scene at around 11 p.m.

Madison Fire Chief Richard Clark said the fire was called in by someone on Alexander Avenue who saw it from across Silver Lake.

“They said there was a big column of gray smoke,” said Clark.

Assistant Chief Michael Brooks and his son, Jonathon, were among the first to arrive and, using hand tools, established a fire line around it as they called in for more resources, State Forest Protection Bureau Forest Ranger Thomas Trask said Monday.

Clearing brush and other fire fuels in a 3-foot swath around the fire helped prevent it from expanding.

“My son, Jonathon, and I worked the line for 45 minutes before other crews arrived,” said Michael Brooks in an email Monday.

“The crew from Freedom was the first mutual aid company on the scene, followed by Center Ossipee, Tamworth and West Ossipee,” Brooks said.

“We deployed a little over 1,000 feet of supply line from the brook to the scene. Mop-up (making sure the fire was out) was extensive due to the terrain and the extremely dry conditions,” he said.

Trask said firefighters used different types of vehicles to fight the fire, including all-terrain vehicles, utility terrain vehicles, pumper trucks and a couple of 2½-ton trucks that carried water as close to the fire as possible.

“The deuce-and-a-halfs were able to get in to within 1,000 feet from the fire,” said Trask.

Brooks added by email: “Special thanks to Stalin Arias for his time, the use of his UTV to get me to the head of the fire very quickly and guiding other crews to the scene.” He said Arias is a “good friend” who lives across the street from where the fire was. “I asked for help, and he was there.”

Trask said the firefighters did a great job keeping the fire contained. “I was up there this morning, and the rain has only saturated about half an inch deep, so they’re going to continue to monitor throughout the week to make sure nothing is burning deeper,” said Trask, adding that drought conditions made the fire spread rapidly.

The fire at Eidelweiss was called in around 4:45 p.m., Clark said, adding Conway Village assisted as his department was busy on Lead Mine Road.

Conway Fire Chief Steve Solomon said there was no active fire when they arrived. Firefighters saw the power was out to the home and there was a burning odor in the air.

“We found there was a lightning strike to a tree right behind the house,” said Solomon. He said the fire traveled through the ground into the basement. “It blew a piece of siding off the building and blew some pine boards off, the inside of the wall, traveled along heating pipe ... tripped numerous breakers in the panel.”

The fire didn’t cause structural damage. The home was occupied by renters at the time, said Solomon, adding that they had to seek another place to stay since they couldn’t turn the power back on. An electrician will need to be called in, he said.

“It’s common to see things that were plugged in, like television sets, computers, even some of the newer appliances that have computers in them, no longer function after a lightning strike, so all of those things will have to be tested as well,” Solomon said.

Breakers in the house across the street also were tripped, but that home wasn’t damaged, Solomon said.