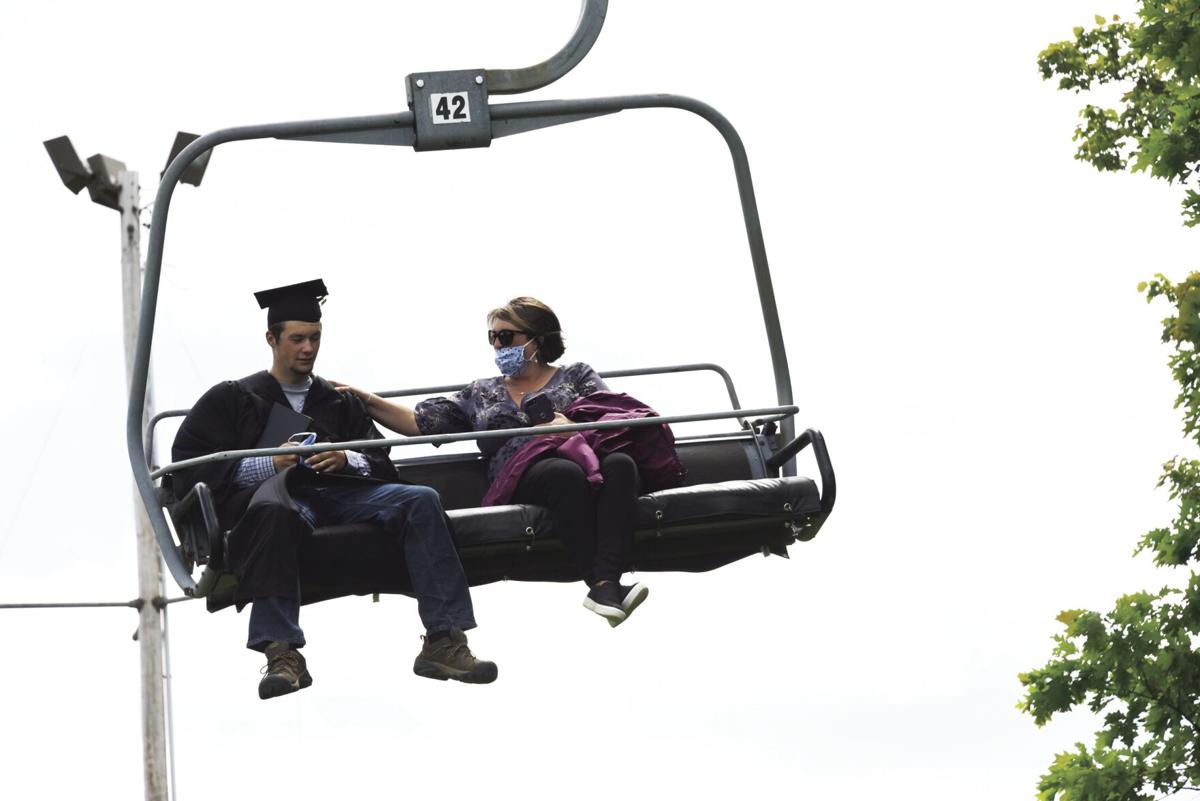 A student and his mom ride the chairlift during the 2020 graduation at Mount Cranmore. (JAMIE GEMMITI PHOTO) 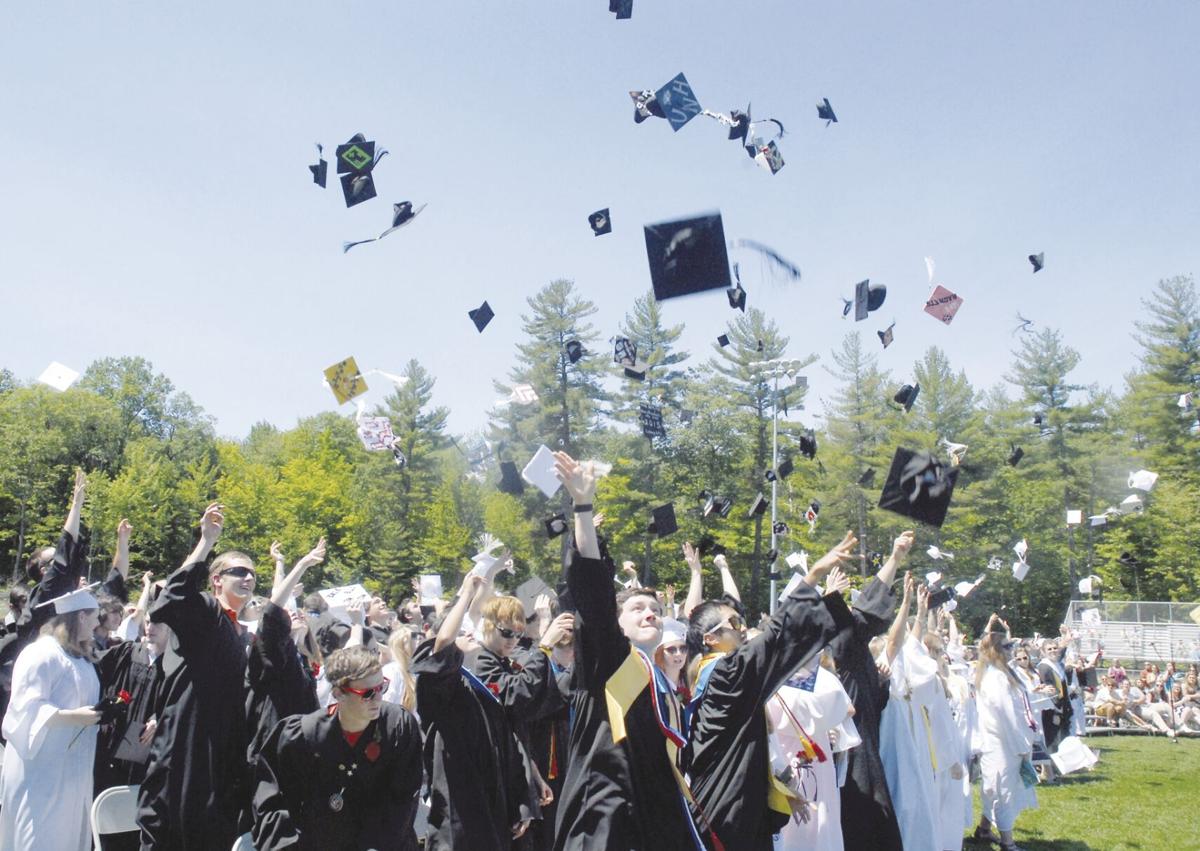 In 2015, Kennett High graduates throw their mortarboards in the air at Gary Millen Stadium. (FILE PHOTO) 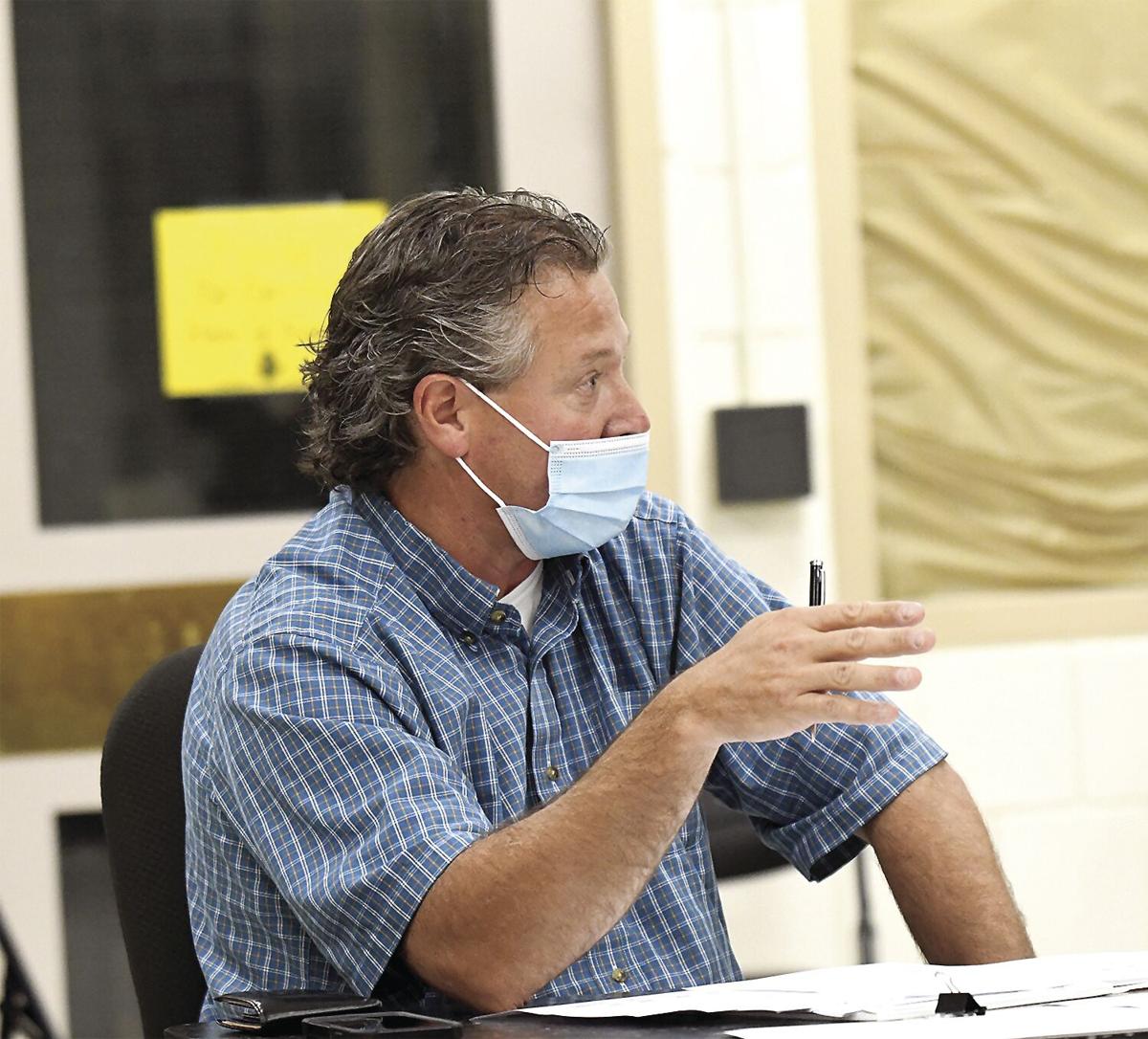 Curtis Coleman, the newest member of the Albany School Board, asks at the Nov.18 SAU 9 Board meeting about plans for graduation and prom at Kennett High School next spring. (LLOYD JONES PHOTO) 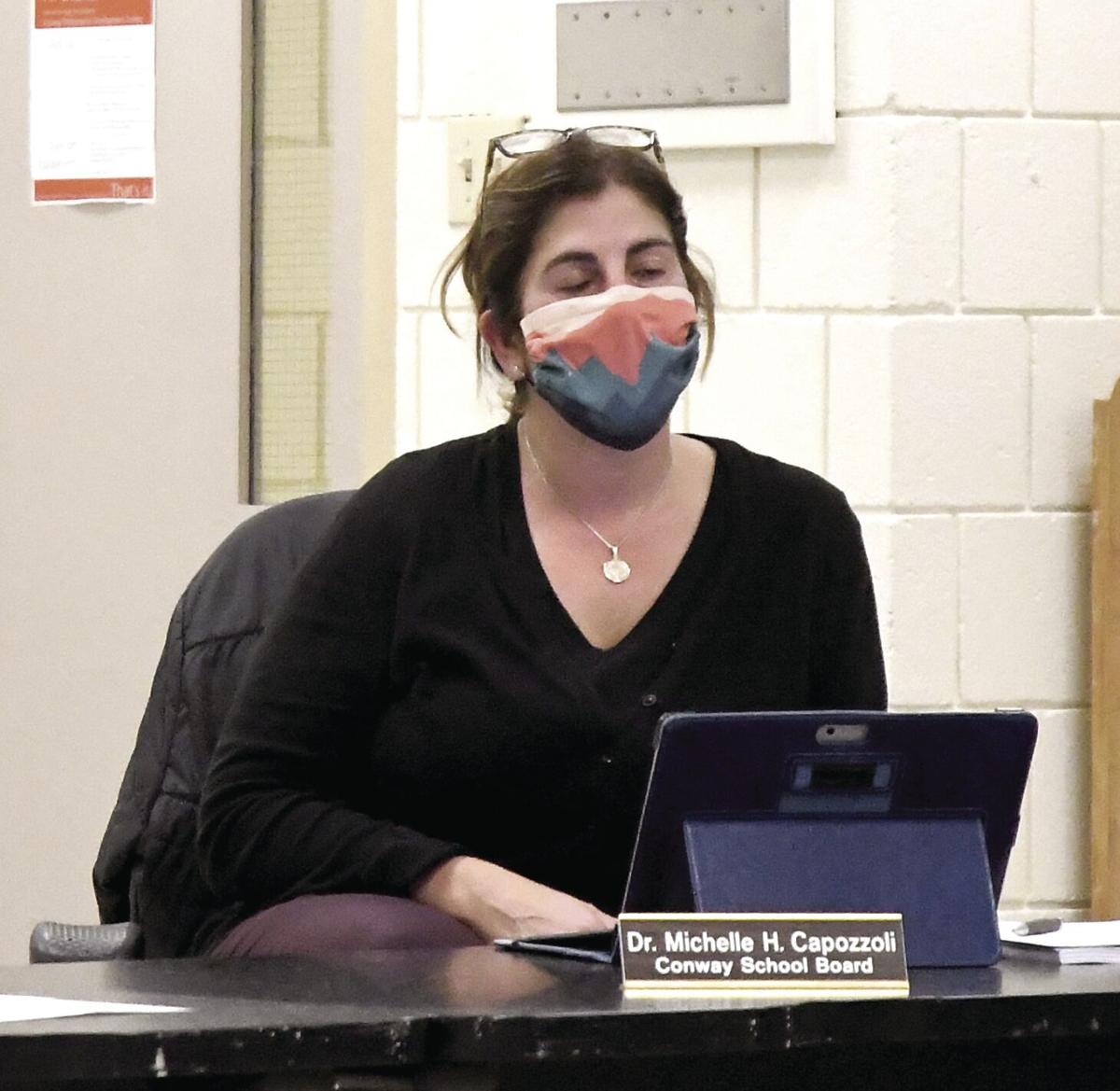 A student and his mom ride the chairlift during the 2020 graduation at Mount Cranmore. (JAMIE GEMMITI PHOTO)

In 2015, Kennett High graduates throw their mortarboards in the air at Gary Millen Stadium. (FILE PHOTO)

Curtis Coleman, the newest member of the Albany School Board, asks at the Nov.18 SAU 9 Board meeting about plans for graduation and prom at Kennett High School next spring. (LLOYD JONES PHOTO)

CONWAY — Tradition or a mountaintop?

Those are the options that seniors at Kennett High School are weighing when it comes to graduation next spring. Right now, the Eagles seem split on what they prefer.

The topic was brought up at the Nov. 18 SAU 9 Board and again at the Conway School Board meeting on Nov. 22.

“This is the kind of a topic that a lot of parents are talking about,” Curtis Coleman of the Albany School Board and a parent of a senior at KHS, told the SAU 9 Board.

“When do you think the discussion of graduation, prom and things like that are going to happen?” Coleman asked. “I know there is some fundraising going on for Project Graduation.”

The Conway School Board on Oct. 12 set Kennett graduation for Saturday, June 11, at 10 a.m. but did not pinpoint a location.

Kennett, which will celebrate its 100th graduation in 2023, has traditionally held graduation outdoors (weather permitting) — first on the athletic fields at the old high school in Conway Village (now Kennett Middle) and later at the Gary Millen Stadium when the hometown flock moved to Eagles Way in 2006.

Outdoor graduation has routinely seen close to 1,000 people attend the approximately 90-minute ceremony, which traditionally featured the presentation of various awards to students along with performances by the KHS band and chorus. When there has been inclement weather, ceremonies have moved into the school gymnasiums.

Graduation is capped with Project Graduation where the grads spend one final day together before heading off their separate ways.

“An evening of fun” and “plenty of food” are often the only clues that event organizers share.

That all described graduation in pre-COVID-19 days. When the world changed for students on Friday, March 13, 2020, it prompted everyone to think outside the box on a lot of things. And while prom has not officially taken place under the Kennett umbrella (though parents did host a prom at the Omni Mount Washington Resort in Bretton Woods last June), graduation has taken place each of the past two years atop Mount Cranmore in North Conway.

It was a parent’s idea to do so, and at a Zoom-held virtual meeting in May of 2020, the Conway School Board unanimously approved the high-flying idea to hold graduation for the Class of 2020 as well as Eagle Academy students at the summit of the North Conway resort.

At that meeting, Kennett High School Kevin Carpenter said that Ben Wilcox, president and general manager of Cranmore and a 1982 KHS graduate, was “phenomenal. The Fairbanks (family that owns the resort) have been phenomenal. They’re looking for zero dollars from us, they’re not looking to charge us anything. They want to be part of doing something special for our kids.”

The 2020 graduation spanned two days, beginning the evening of Friday, June 12, with the traditional speeches and announcements of awards typically presented virtually.

The following day, Cranmore took center stage as graduates with their four guests, rode the Skimobile Express quad chairlift up the mountain. They stopped at the east bowl with views of Peaked and Middle mountains, where the graduates were announced by Carpenter, presented their diploma, had a photograph taken and were acknowledged by Richard and Conway School Board Chairman Joe Lentini and then proceed to the Meister Hut, where another photo was taken on the ledges, with Mount Chocorua, the Moats and Mount Washington as a backdrop. Capping off the day was the Kennett Karavan, where students and their classmates drove through the village, ending at the Ham Arena.

Last year, Cranmore again graciously agreed to hold graduation. The date had to be pushed back to a Sunday, but it was another huge success. A new addition on Saturday — the senior banquet — replaced the Zoom speeches, and with COVID case rates significantly lower due to the arrival of the vaccines, the seniors took part in a carnival in Millen Stadium. Eight to 10 giant inflatable stations were set up for the Eagles along with three food trucks.

Activities later moved under a giant tent where speeches and special awards were presented. Students and staff gave the new addition two enthusiastic thumbs up.

Coleman said he has heard from people who prefer the traditional graduation ceremony. “I know there is a lot of concern about where graduation is going to be held,” he said. “At least the people I’ve talked to in Albany really don’t want to take a chairlift ride. They want to be like a lot of other high schools were last year and have a normal graduation.”

Coleman added: “The whole prom thing — obviously, parents last year fundraised and did their own thing, but now we’re getting to the end of November, and it takes time to raise money and whatnot.”

Richard said he would consult with Carpenter “because he usually establishes a couple of committees with parents and students. I will get after him and find out because I don’t know if they’ve already begun some of those conversations.”

Michelle Capozzoli, member of the Conway board and vice-chair of the SAU 9 Board, said Carpenter planned on conducting a survey with the senior class.”

At the Conway School Board meeting, she brought up prom and graduation. “I think there are parent groups that are trying to put things together for our kids,” she said, “so if we could start answering those questions, it would be great.”

Carpenter said work is being done on the survey, and seniors will begin to receive information on prom and graduation soon. “I can tell you right now, actually they’re split 50-50 about what they want to do for graduation, which is not always a great place to be,” he said.

Regarding prom, Carpenter said officials are looking at possibly hosting it outdoors under a large tent because “of just not knowing what the (COVID) conditions are going to be (next spring).”

Carpenter said social studies teacher Melissa Cyr is the prom adviser. “She’s working on trying to put some stuff together,” he said.