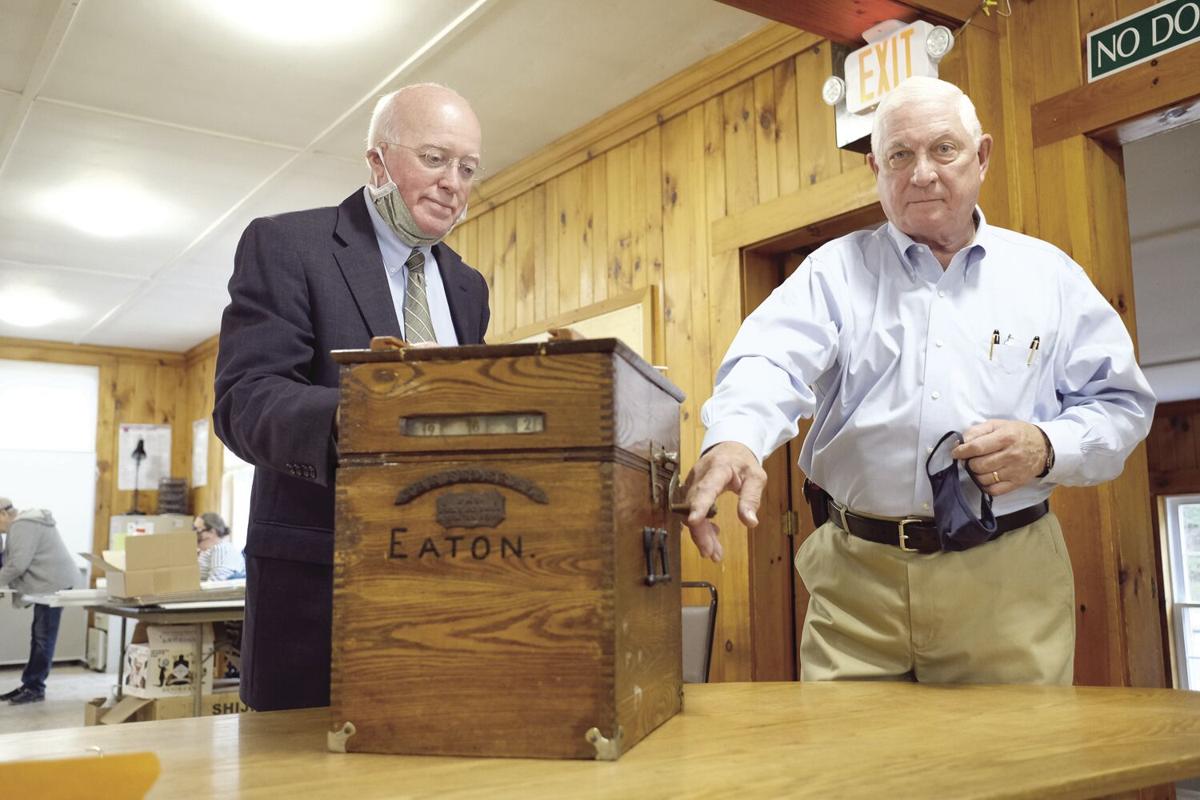 New Hampshire Secretary of State Bill Gardner and Eaton Moderator Thaire Bryant chat about the ballot box that counts ballots the town has had since 1891 in the Eaton Town Hall on Oct. 29, 2020. (JAMIE GEMMITI PHOTO)

Vincent Marzello, 65, of West Lebanon voted initially as himself and later as a female under the name “Helen Elizabeth Ashley,” in the 2016 Presidential Election. (COURTESY PHOTO)

New Hampshire Secretary of State Bill Gardner and Eaton Moderator Thaire Bryant chat about the ballot box that counts ballots the town has had since 1891 in the Eaton Town Hall on Oct. 29, 2020. (JAMIE GEMMITI PHOTO)

Vincent Marzello, 65, of West Lebanon voted initially as himself and later as a female under the name “Helen Elizabeth Ashley,” in the 2016 Presidential Election. (COURTESY PHOTO)

CONWAY — According to longtime N.H. Secretary of State Bill Gardner, New Hampshire is the most open state in the nation when it comes to voting, and former President Donald Trump knows it.

“I think we should all be proud of the job New Hampshire does with its elections,” Gardner, serving his 23rd two-year term in office, said by phone Tuesday when asked about Republican allegations of voter fraud, such as was made by John Hartman of Eaton, vice chair of the Mount Washington Valley Republicans, who wrote a letter about it to the Sun.

The longest-serving secretary of state in the country said N.H. provides every opportunity for eligible citizens to cast their ballots. Residents are asked to provide a picture ID or proof of residence, and if they have neither, people working the polls may vouch for that individual if they know them. If not, potential voters have a rare third avenue to receive a ballot: the election moderator will photograph them and have them sign an affidavit that they are who they say they are and are eligible to vote in the state.

According to the website, Ballotpedia, “If, after the election, administrators determine that the voter who cast the provisional ballot was eligible to vote, the ballot will be counted as a regular ballot. ... As of October 2020, every state except Idaho, Minnesota, New Hampshire and Wyoming had established a provisional voting process. Although federal law mandates provisional voting processes, the states themselves define those processes. Consequently, provisional balloting can vary widely from state to state.”

In the 2016 presidential election, 755,600 people voted in New Hampshire. Of those, 1,444 had their photos taken to cast their ballots, Gardner said.

“That’s one out of 755 voters,” he said, “and not one of them ran out of the building not wanting their photo taken. I think if they weren’t a legal voter, they might run.

“We’re the only state in the country that has that,” Gardner continued. “A few years ago, I had the opportunity to tell Donald Trump, who was president at the time, and he said he wasn’t aware of this.”

Gardner says there have been very few cases of voter fraud here.

If convicted of illegal voting, a felony, a person faces a maximum penalty of seven years in prison and a $4,000 fine. He or she can also lose the right to vote in future elections.

“The Attorney General’s Office has had a few incidents,” said Gardner, “and a few people have been charged.” He said in 2016 there were “about a dozen incidents” of people trying to vote more than once.

“One was (University of New Hampshire) student (Spencer McKinnon) who voted in his hometown of Dracut, Mass., and in Durham,” said Gardner.

Trump claimed he lost New Hampshire because “thousands” of illegal voters were bused in from Massachusetts, a Politico article said. At that time, then New Hampshire Attorney General Gordon MacDonald said his office investigated 51 cases involving possible voter fraud related to the 2016 election.

Gardner also recalled “six or eight years ago,” an incident where a man tried to vote in both Gorham and Jackson. “The man was working at a camp and had promised to vote for a person for state representative, but when he went to Gorham, that person’s name wasn’t on the ballot because it was a different district,” he said. “He then went to Jackson (where the candidate was on the ballot).”

Gardner added: “I met him at a recount (in Concord). He offered to help work it and when I asked him why he said he had voted in two places and the AG’s office suggested he should volunteer.”

Another case of voter fraud was in West Lebanon.

“A guy voted twice as a cross-dresser in the 2016 presidential election,” Gardner said of Vincent Marzello, who voted initially as himself and later under the name “Helen Elizabeth Ashley.” He had a photo taken and filled out the voter affidavit.

“The Attorney General’s Office went after him in a bigger way,” said Gardner.

According to the Patch website Marzello, 65, “was sentenced to 90 days in prison. The prison time, however, was suspended for a period of two years. Marzello was also fined 10 percent of the civil penalty of $3,000 with the remaining funds suspended for five years.”

Gardner said supervisors of the checklists in each town oversee voter lists and are currently in the middle of “a purge” of the voter rolls.

Under “Voters and Checklist” RSA 654:39 is the “Verification Every 10 Years,” rule, which since 1981 has called for the supervisors to “verify the checklist once every 10 years.”

The supervisors began this process June 1. They are looking for people who have not voted in the past two federal elections. In Conway, Town Clerk Louise Inkell said as of last Thursday, about 2,201 people are going to get letters stating they will be purged if they don’t respond.

Inkell also said when a registered voter moves from one N.H. town into another, the Supervisors of the Checklist in the new town will electronically pull that person into their checklist using the Secretary of State’s ElectioNet voter database and remove him or her from their former town’s checklist.

When a voter moves to a new state, it’s the responsibility of either the new town or the person to make sure they are removed from the old checklist.