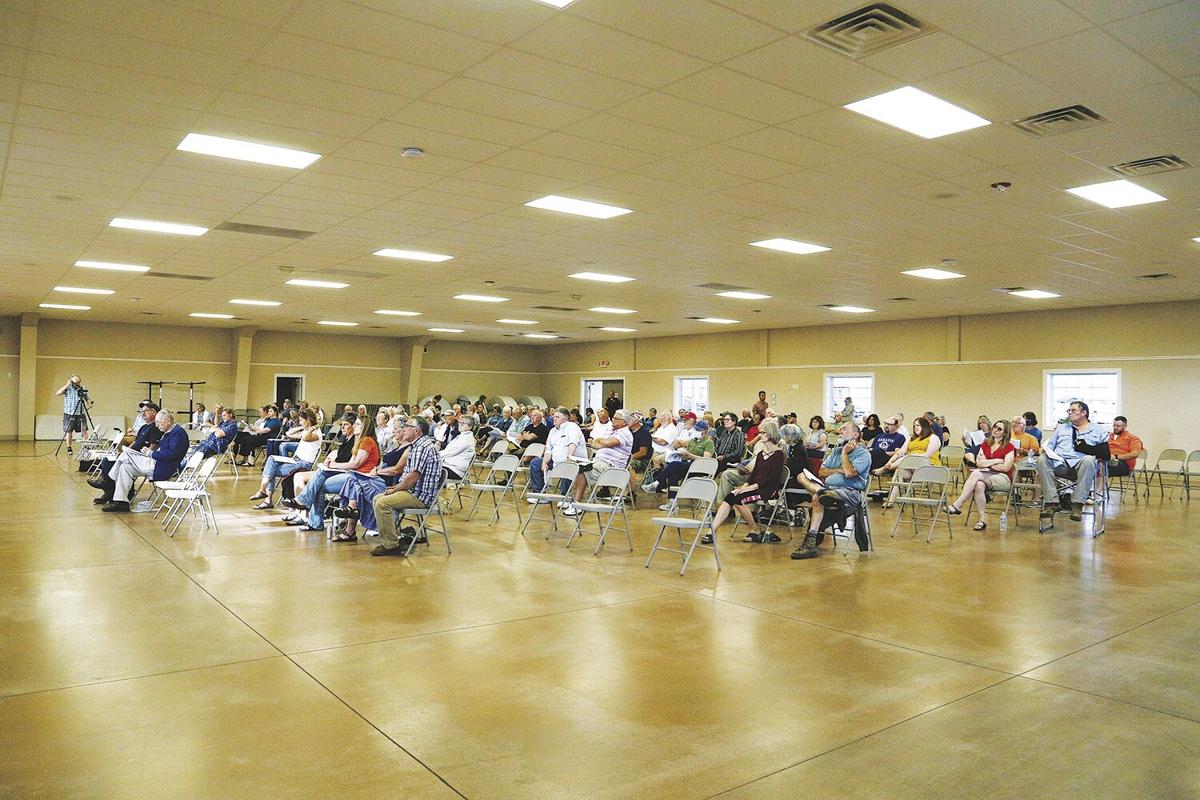 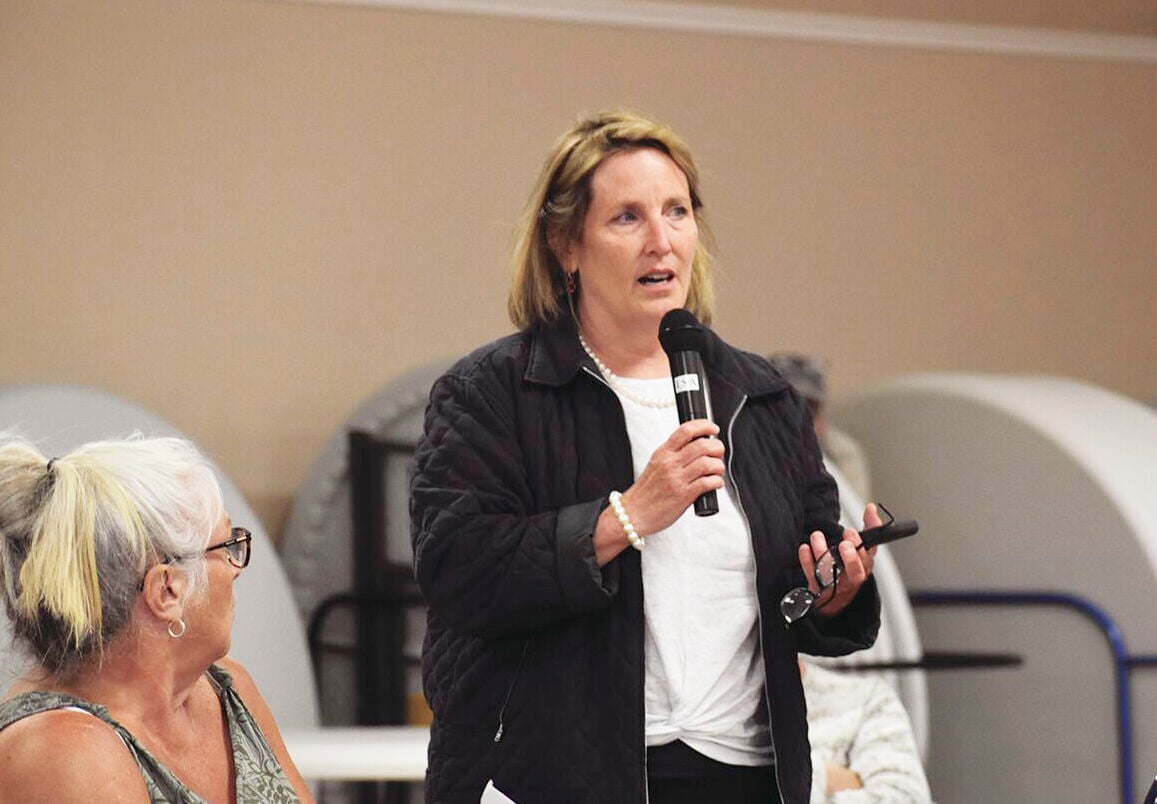 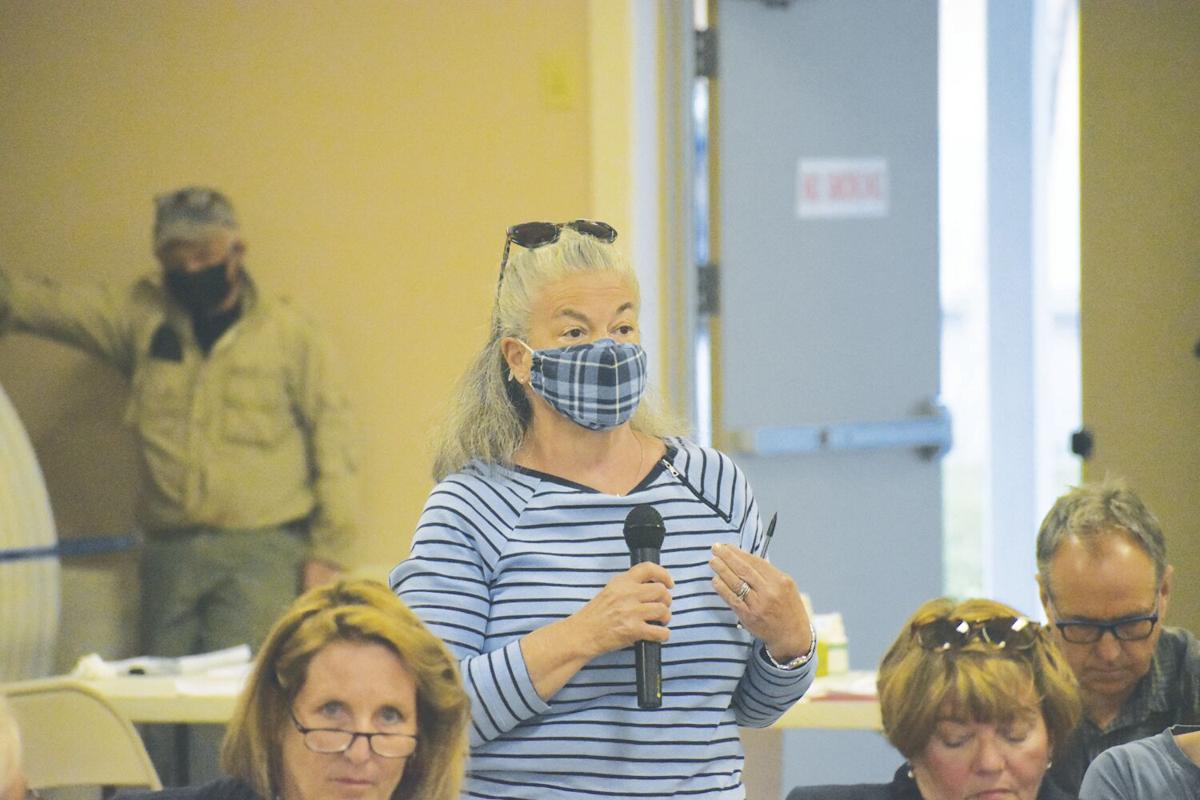 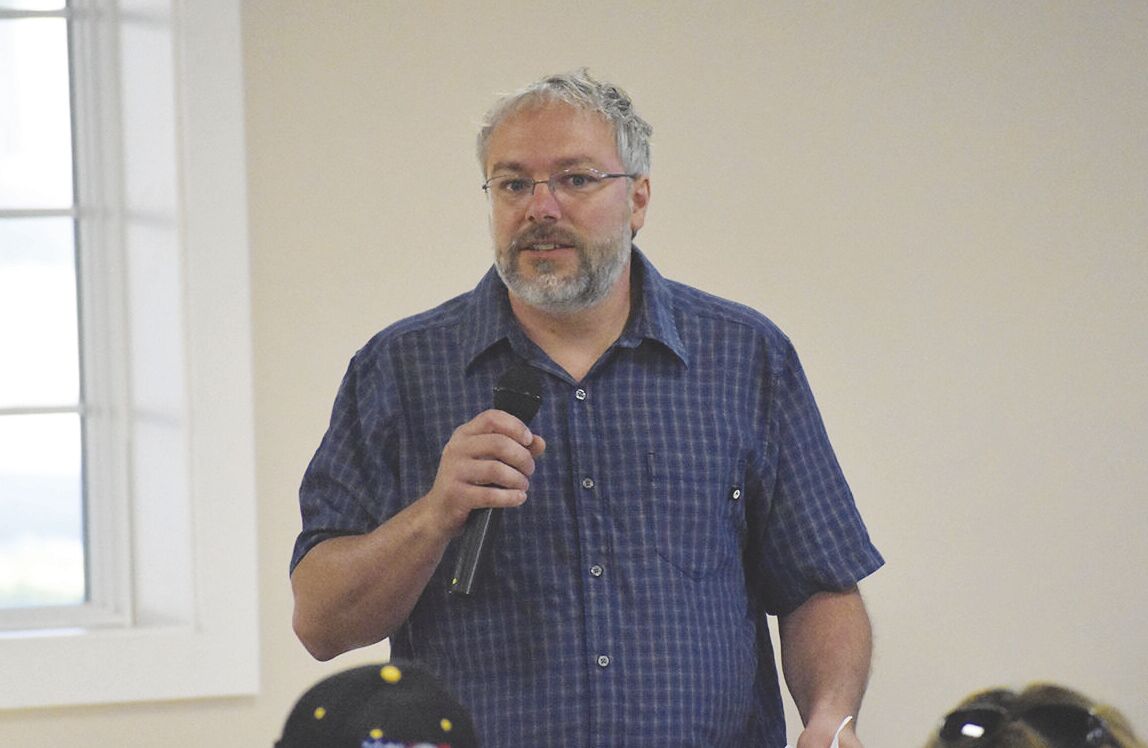 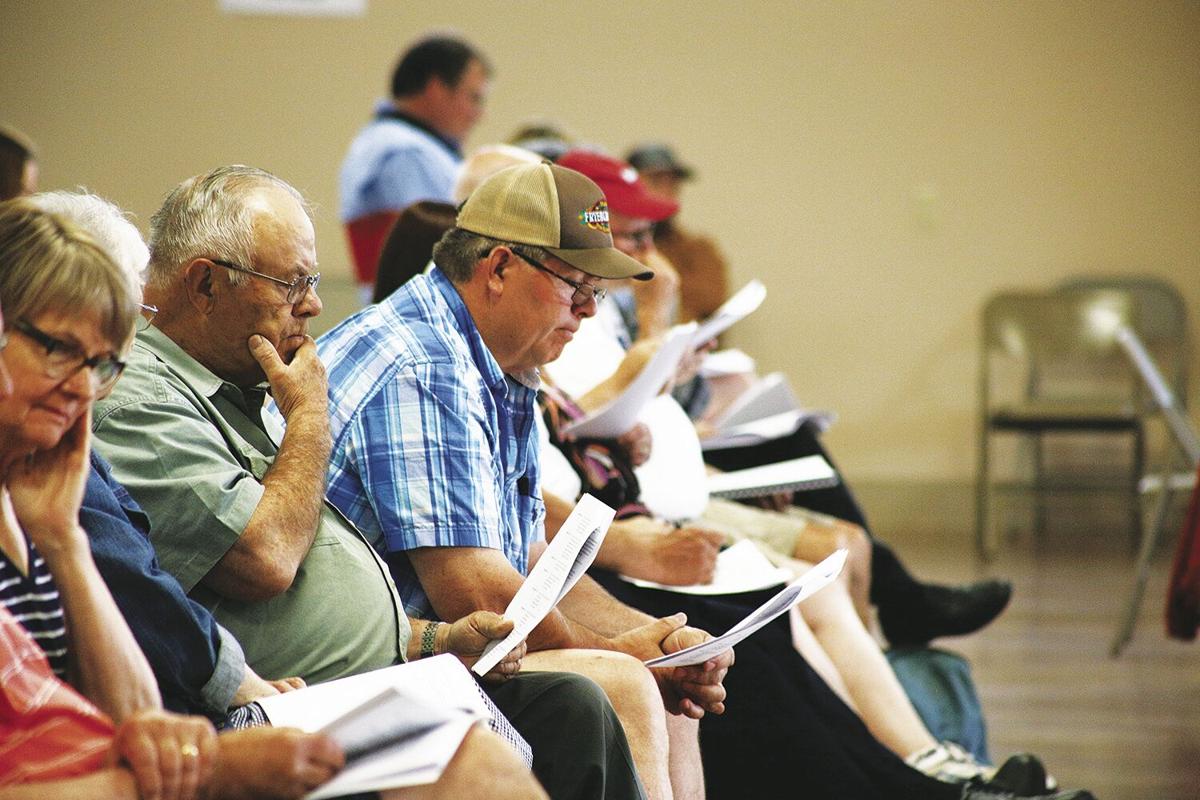 Mulling the warrant last Thursday in the Expo Building at the Fryeburg Fairgrounds are Fryeburg Fair President Roy Andrews (second from left) and his son, Dave. (RACHEL SHARPLES PHOTO)

Mulling the warrant last Thursday in the Expo Building at the Fryeburg Fairgrounds are Fryeburg Fair President Roy Andrews (second from left) and his son, Dave. (RACHEL SHARPLES PHOTO)

FRYEBURG, Maine — Anyone hoping the town would become a "marijuana mecca" would have left last Thursday's town meeting disappointed, as a zoning article to allow recreational marijuana stores was overwhelmingly defeated in a voice vote.

This year, town meeting took place at the Expo Center at the Fryeburg Fairgrounds rather than at the Fryeburg Academy. A sociially distanced crowd of about 110 people attended.

The discussion lasted roughly a half-hour.

Resident Nora Schwarz was concerned about how recreational sales would affect her property values. She feared that if the article passed, Fryeburg would become a magnet for Granite Staters who would cross state lines just to buy marijuana. She said she would rather the town be known for Fryeburg Academy and being the oldest town in Oxford County.

"Do we want to be a marijuana mecca?" said Schwarz rhetorically.

Sheila Duane of the Fryeburg Academy board of trustees said the board unanimously opposes the zoning change.

"We hope that the people of Fryeburg will vote it down so that we protect our students, the ones that live here and those that come from afar," said Duane.

Head of School Erin Mayo said while she didn't question the scruples of medical marijuana retailers in town, she was concerned that if the stores were allowed, buyers would end up providing marijuana to minors.

However, CBW Labs co-owner Dan Tepe said voting to support Article 43 would actually reduce access to minors. He described his business as a medical marijuana facility and said 18-year-olds are allowed to purchase medical marijuana but not recreational marijuana.

Tepe also said that existing medical marijuana retailers, like his, would likely convert to adult use if Article 43 passed, thus keeping the total number of stores relatively small. "We're not going to see 10 stores in town," said Tepe.

Tepe, along with Eric Felice, who is one of the owners of a proposed marijuana grow business called Mountain Valley Cultivation, said adult-use recreational marijuana is actually more highly regulated than medical marijuana.

It is tracked more vigorously by the state and tested for things like mold and pesticides, they said.

"So by moving to adult use rules, we're actually providing a safer product for patients, and people that choose to use it recreationally," said Tepe.

"Sounds to me like the no's have it," said Malia, who asked if anyone disagreed. No one did.

"It's a vote and Article 43 fails," Malia said, at which attendees broke into brief applause.

Article 33, which called for $18,500 to be donated to Eastern Slope Regional Airport, narrowly survived a bid by Schwarz to throttle it down to last year's amount of $16,500.

Schwarz said she was unhappy with the airport authority's stewardship of  land in terms of clear-cutting at Round Pond.

"There's no reason to give them more money," said Schwarz.

Airport Authority Treasurer Gene Bergoffen said the Federal Aviation Administration made the airport cut down the trees. He also said the town's contribution is helpful because the airport runs on narrow margins. He said the airport has had "clean" audits for past several years

The voice vote was too close to call so Malia had voters stand up to vote yes or no on Schwarz's amendment. The stand-up vote showed Schwarz's motion failed.

"I think it's pretty obvious," said Malia. "The motion is defeated."

Article 33 then went on to pass by voice.

The rest of the articles passed with little discussion. They included:

• Article 39, asking for $100,000 from the credit reserve account to “be used to repair or improve existing sidewalks and/or to remove abandoned sidewalks.”

• Article 40, to authorize the select board to acquire the remaining ownership interest in a parcel of land called Jockey Cap.

• Article 41, to allow the town to seek federal financing for Jockey Cap and enter into a conservation agreement with the state.

• Article 44, to repeal a five-vendor limit on the number of food trucks allowed to operate in town and also to allow customers without handicap placards to be served by food truck vendors in their cars.

"Are people are going to be overdosing on hot dogs if we do this?" quipped resident Lisa Steadman.

In addition to the June 10 town meeting, balloting was held at the rec center on June 8. Incumbent school board member Allison Leach was re-elected to a three-year seat as write-in with 10 votes. She bested Zac Mercauto, who received nine write-in votes. But Mercauto received one write-in vote as a school board alternate and he accepted that three-year post.

If you say anything against the dopers beloved marijuana they always bring up "Reefer madness" Because it's all they really have. It causes a lot of social problems and mental health issues. There are many many documented cases of patients having psychiatric events related to marijuana use. Crash rates also go up with the use. All you have to look at is Colo. It is a vastly different place than it once was.