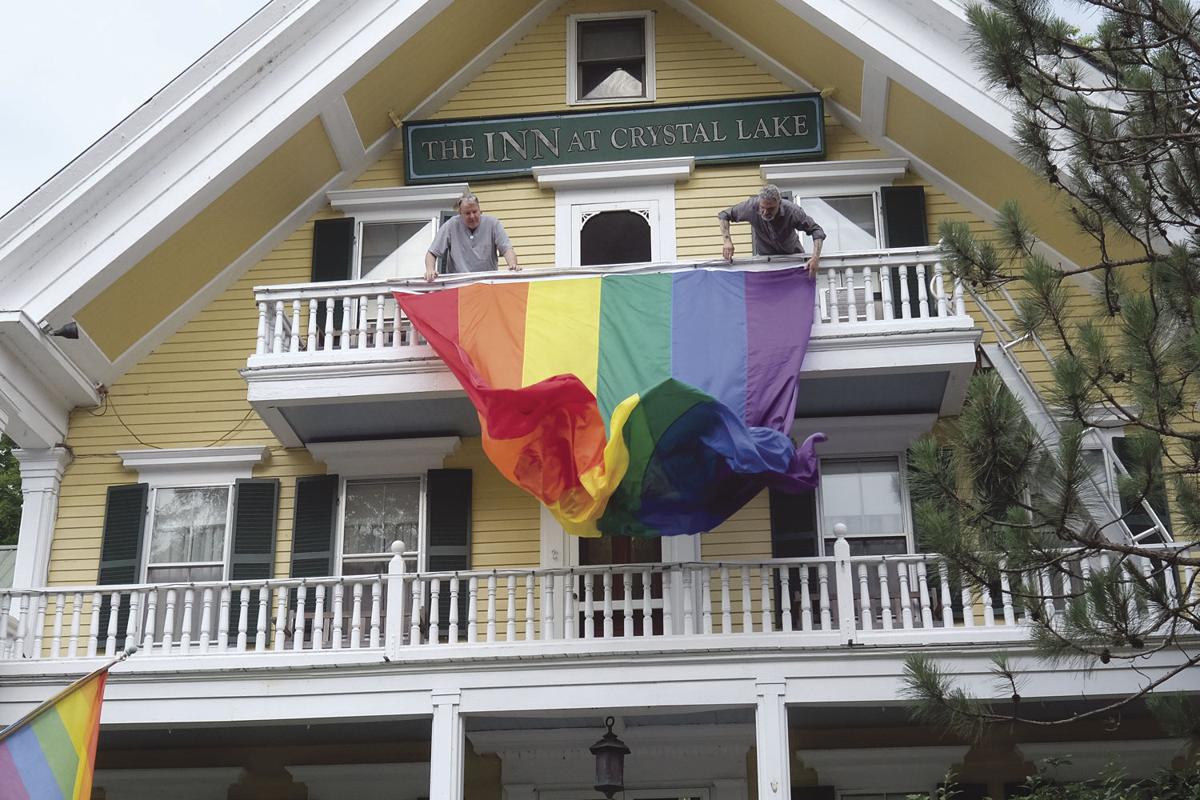 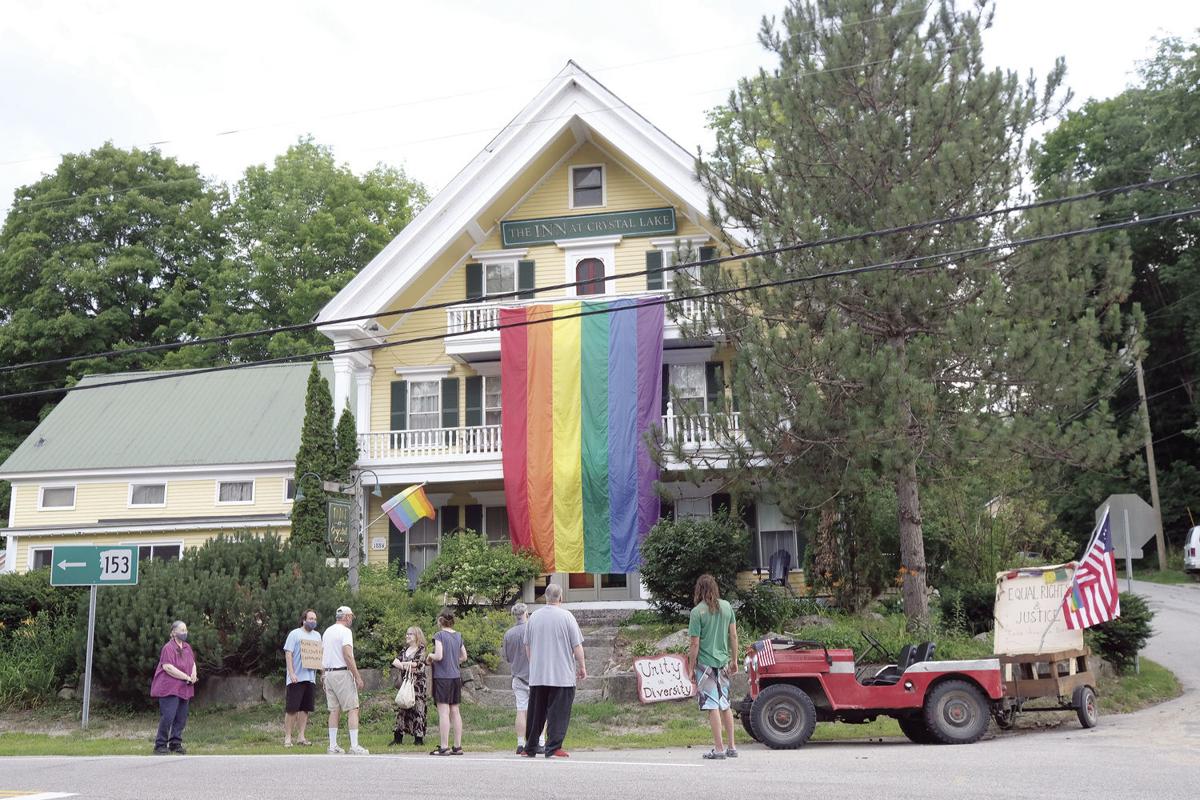 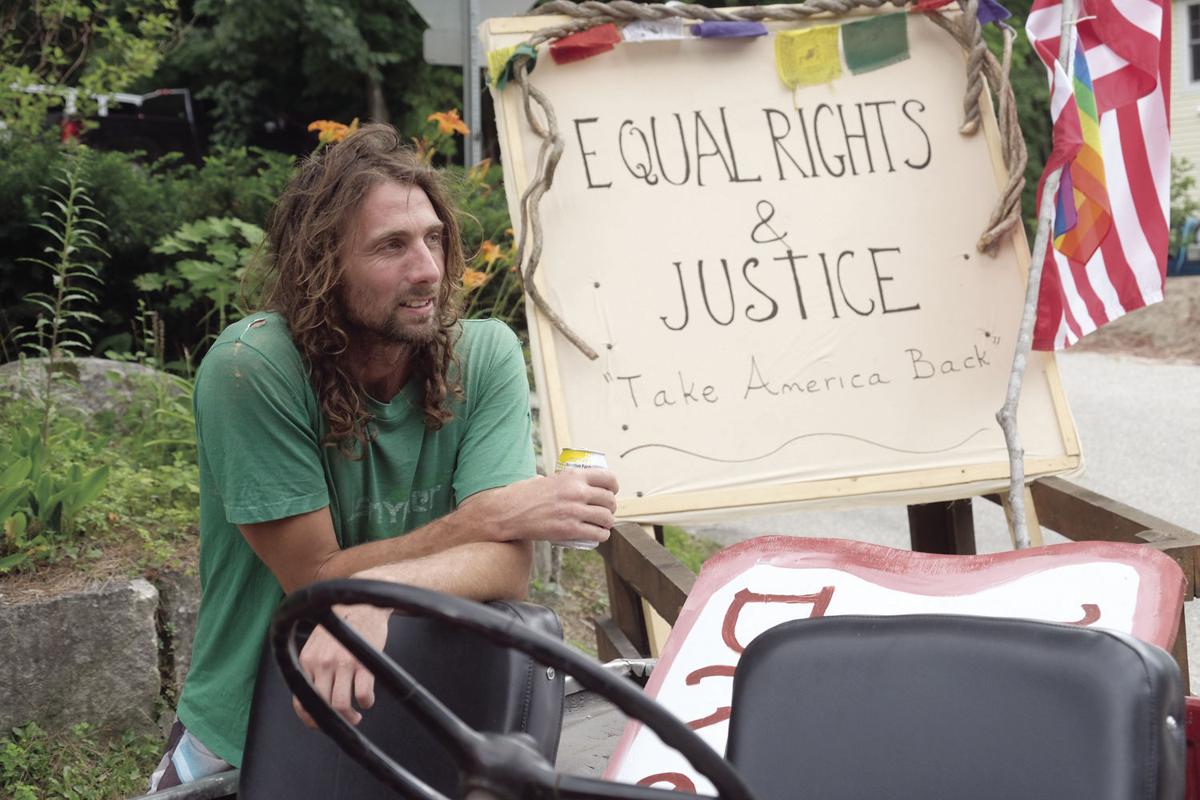 Quddus Snyder of Eaton, seen Monday, has spearheaded a movement to overcome elements of hate he sees in the small town of Eaton. (JAMIE GEMMITI PHOTO) 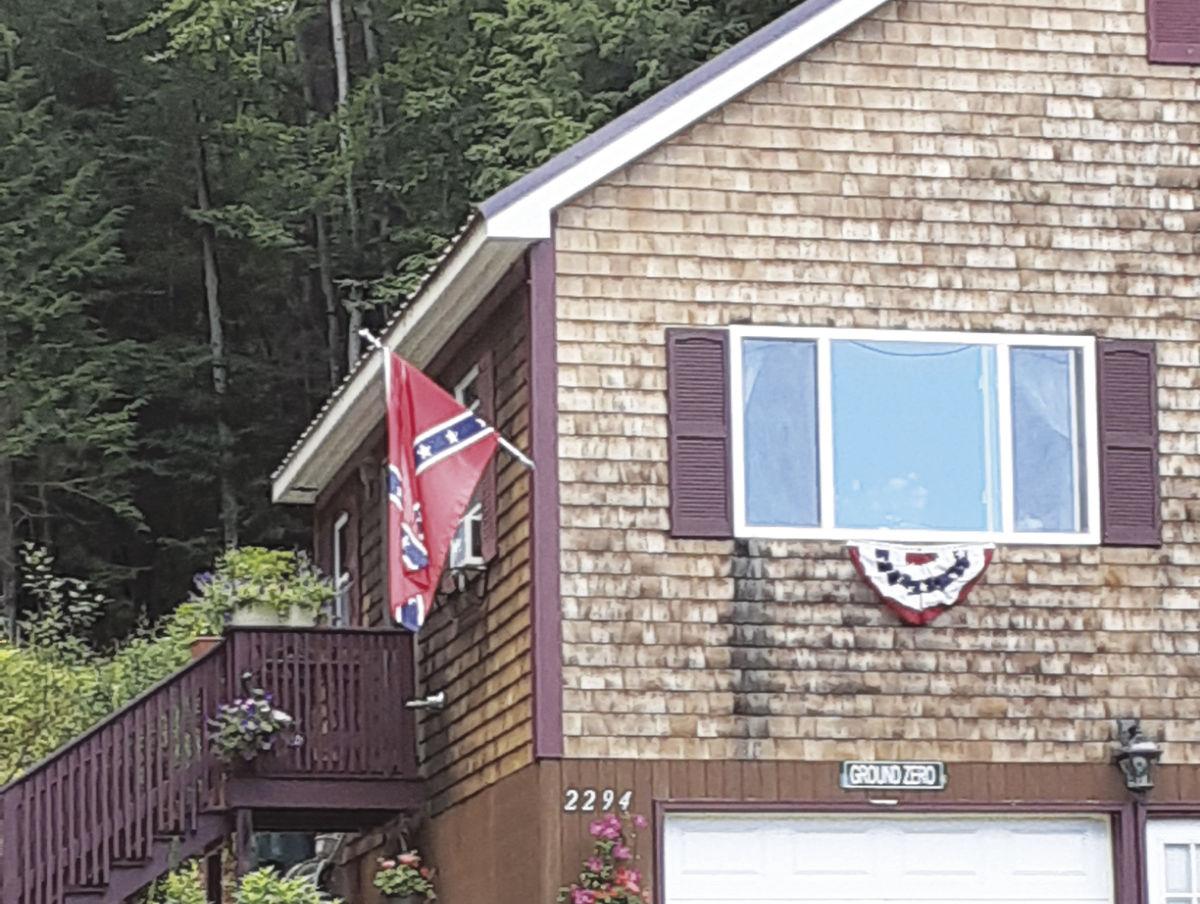 A Confederate flag is seen at Roy Alley's house in Eaton. (COURTESY PHOTO) 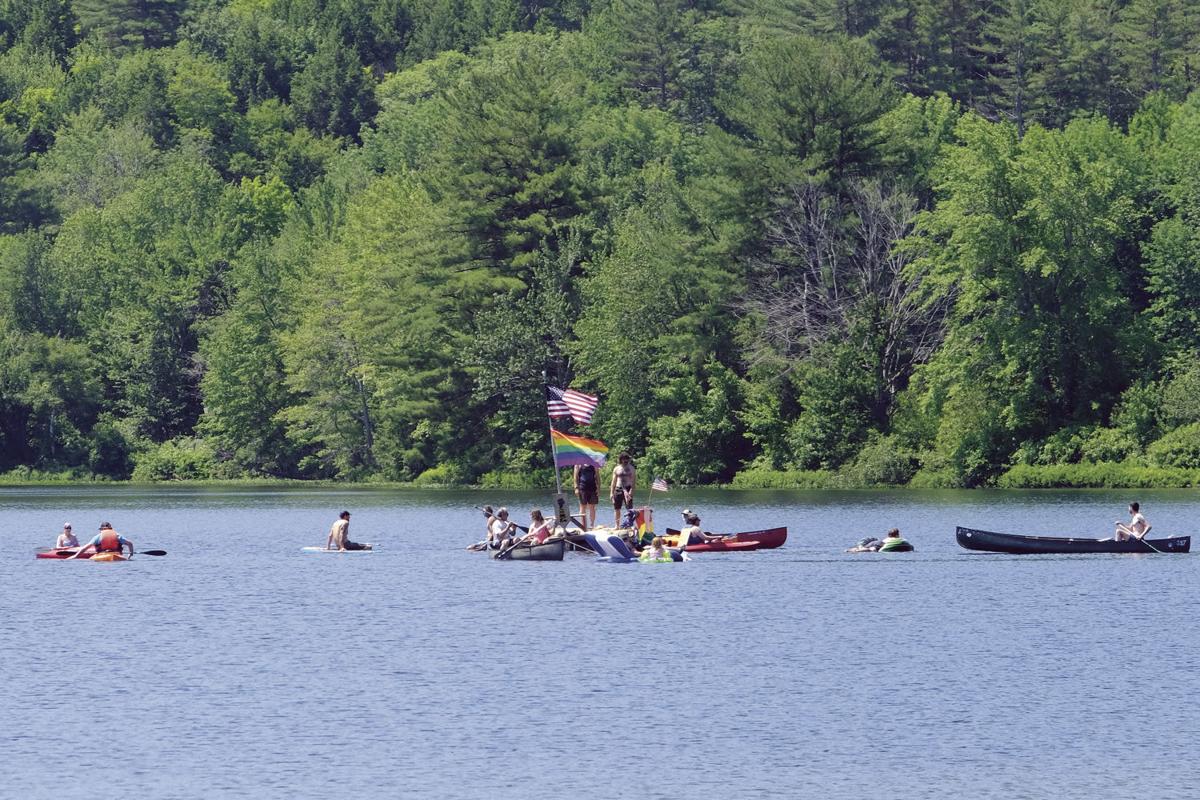 Quddus Snyder, 41 of Eaton organized this floating protest on the Fourth of July in Eaton. (JAMIE GEMMITI PHOTO)

Quddus Snyder of Eaton, seen Monday, has spearheaded a movement to overcome elements of hate he sees in the small town of Eaton. (JAMIE GEMMITI PHOTO)

A Confederate flag is seen at Roy Alley's house in Eaton. (COURTESY PHOTO)

Quddus Snyder, 41 of Eaton organized this floating protest on the Fourth of July in Eaton. (JAMIE GEMMITI PHOTO)

EATON — The owners of the Inn at Crystal Lake didn’t mean to buy the giant rainbow flag that they unfurled Monday evening, but still, they thought it made a pretty good statement.

The inn owners, Bobby Barker and Tim Ostendorf of Freedom, unfurled the flag from the upper balcony before an audience of about 20 clapping and cheering people.

“It’s kind of a funny, quirky thing,” said Ostendorf. “We ordered a much smaller flag, and the company sent us a 12-by-18-foot flag. Then all the stuff that’s been going on that Quddus (Snyder) has been spearheading sort of made us say, ‘Hey, thank God they sent us the wrong flag.’ Now we are going to utilize it and make a bigger statement than we ever thought we would before.”

They got the flag from Gettysburg Flag Works in East Greenbush, N.Y.

Barker and Ostendorf added that the unfurling was also in response to “unpleasant” things taking place in the community as well as a way to show support for Snyder.

Snyder, 41, is the nominal head of Eaton LOVE (League of Voters for Equality), which had invited members of the public to come to Crystal Lake on the Fourth of July with festively decorated watercraft.

Behind the protest was not only the national Black Lives Matter movement but the fact that a local man has been flying the Confederate flag in front of his home.

Snyder said Alley told him he will take down the Confederate flag when the “gay flags” come down.

Hartman and Alley declined to comment Tuesday by press deadline. Trustees and officers were set to meet in the church basement on Tuesday at 7 p.m., according to littlewhitechurch.com.

Meanwhile, the Sun has learned there has at least one instance of Snyder putting up flags on other people’s property without land owner permission.

Asked about that, Snyder admitted that “the envelope has been pushed once or twice.” For example, he put up a “Eaton Stands with Bubba (Black race car driver Bubba Wallace) sign on someone’s land without permission.

That land owner had already approved an “Eaton Welcomes You” sign and a rainbow flag. He said a flag on town property also was removed.

“We specialize in stunts like the (Eaton LOVE) barge,” he said. “Never vandalism. Never anything destructive.”

According to littlewhitechurch.com, the Little White Church is “a non-denominational, non-profit organization governed by a board of local volunteers, officers and trustees” and seeks to be a place where “all are welcome.”

As for the big rainbow flag at the inn, Snyder said Tuesday, “This flag is an incredible statement. Righteous.”

He said the “community is waking up to the fact that silence in the face of injustice is a betrayal of justice itself.”

Eaton summer resident Dorothy Timberlake Moore was at the flag unfurling with members of her family. She said that on one hand she agrees with Quaker and civil rights leader Bayard Rustin (1912-87), who said communities need “angelic troublemakers.” But she also said she doesn’t want community conflict.

“This has to be a conversation, not a battle,” she said.

Around the time of the floating protest, when Snyder and his friends were sailing on a barge, Marine Patrol gave Snyder a warning for having a navigation hazard on the lake. He was told it couldn’t be permanently parked in the “beach zone” and that it had to be associated with a specific property.

“The Marine Patrol Officer was awesome, helped us tow it to a different shore point on Crystal Lake” belonging to the Timberlake family, said Snyder. “I’ll be reaching out to lakefront property owners and asking if they want to host the raft for several days each; that way, it can travel around the lake and bring joy to all.”

Man with Confederate Flag has Every Right to fly flag on his property. What if I find a BLM flag offensive and I want it removed? I fly a DOZEN 🇺🇲 AMERICAN FLAGS & 1 TRUMP FLAG... Are you coming on to my land ? Bad move❓ This is America🇺🇲 Land of the Free because of the Brave🇺🇲👊🏻 Thank God for the Bill of Rights witch American Patriots will fight to the Death to Protect‼️