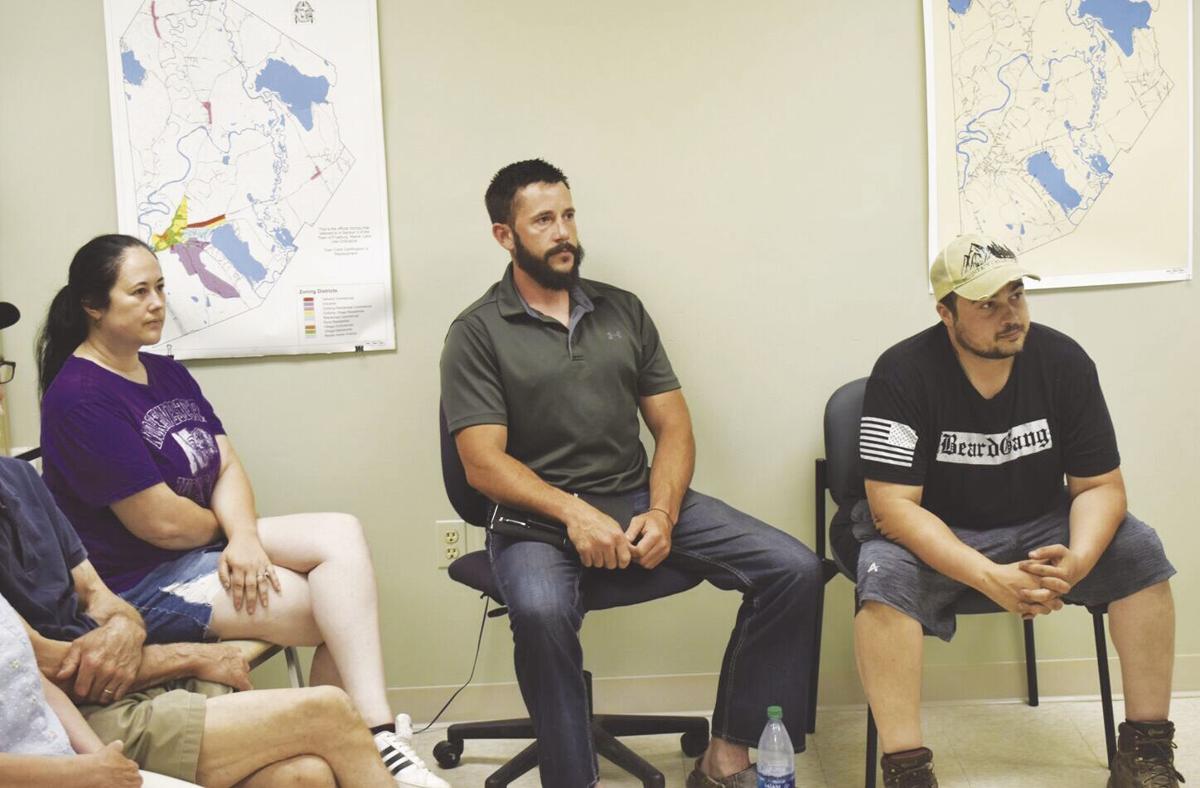 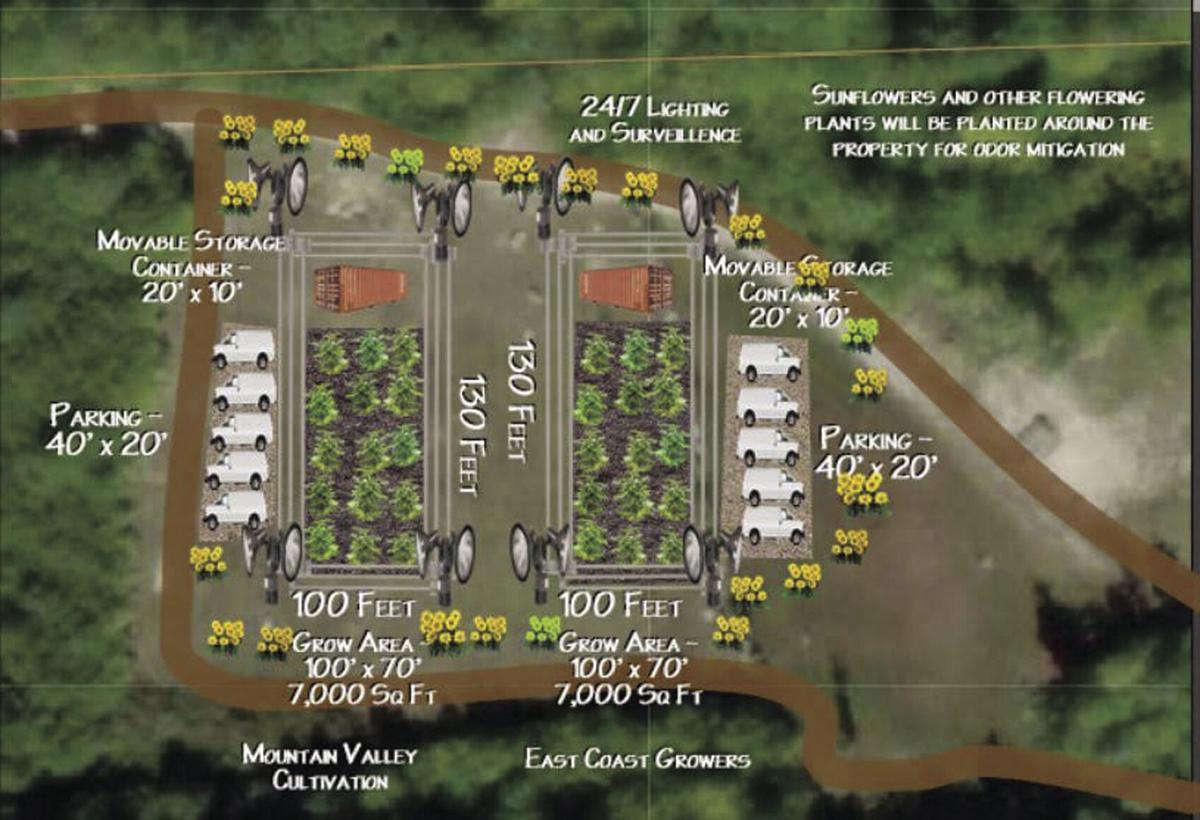 This graphic shows two proposed adult use marijuana grow areas planned for an area between Fish Street and Route 5 in Fryeburg. (COURTESY GRAPHIC)

This graphic shows two proposed adult use marijuana grow areas planned for an area between Fish Street and Route 5 in Fryeburg. (COURTESY GRAPHIC)

FRYEBURG, Maine — Fifth time was the charm for a North Carolina couple who want to operate marijuana grow facilities between Route 5 and Fish Street in Fryeburg. Eric and Tara Felice of Huntersville, N.C., first presented their plans to the planning board in March along with their business partner Eric Alt from Baldwin, Maine. Alt’s name is not attached to the applications dealt with Monday.

The property will be secured with surveillance, fencing and lighting.

Each plot was under a different business name. Tara’s is under the name “East Growers,” and Eric’s is called “Mountain Valley Cultivation.”

Their 50 acres of property comprises the Mountain Valley Farm, and the trio owns it together. The grow area is located at the center of the property. The perimeter will have sunflowers and fragrant florals that will mask and buffer the grow areas in terms of odor.

In the future, they plan to market products ranging from special soils and aggregates to cattle. Monday’s approval related only to the marijuana grow areas. The marijuana they plan to grow will not be sold on site.

The upshot of the meeting seemed to be it would be a larger issue when or if the applicants decide to raise animals. The applicants also said their runoff wouldn’t flow toward a spring in the Fish Street area, which is over a half a mile away anyway.

“Our goal is to be sustainable and responsible,” said Eric Felice in response to a question from the Sun.

Eventually, some or all of Mountain Valley Cultivation might be grown indoors, but for that to happen they’d have to come back to the planning board.

With the board’s approval, the next step is to go to the board of selectmen at the end of the month for another approval. They also need to get the state’s approval.

Asked if they were pleased with the approval, the trio, almost in unison, said “Oh yeah!” “We’re very excited,” Eric Felice added.

Monday’s meeting was a continuation of a public hearing from May 25.

Rebmann said the couple’s approval had been held up over various issues.

For instance, at the May 25 hearing, the planning board found out the applicants missed notifying an abutter out of a list of about a dozen and a half people. Rebmann said the trio was eager to get their project approved.

However, the applicants and planning board were able to reach the abutter by phone from the meeting and confirm he didn’t have any problems with the project.

Rebmann explained that vice chairman Ed Price, on May 25, had insisted another public hearing should be held in a month with all new certified mail notices had to be sent out.

Rebmann said he would object to that and consider resigning if that were to happen because he considered Price’s approach heavy-handed. Rebmann, at the insistence of Selectman Kimberly Clarke, explained that the meeting May 25 became heated and at one point Price threw his ordinance book on the floor.

Clarke said Price’s behavior was inappropriate. “We can’t have somebody sit on the board that’s going to have a temper tantrum,” said Clarke.

Rebmann said the other planning board members agreed with a compromise he suggested that the trio get the remaining abutter’s signature and continue the hearing to Monday instead of making the trio wait a whole month. Price abstained from the vote on the compromise.

Clarke and Rebmann said to Price’s credit, he is a hard-working and diligent planning board member.

Rebmann said one of Price’s concerns was that the couple was from out of state because Maine law originally had a residency requirement for growers, but Rebmann and Clarke said a court deemed that requirement to be unconstitutional.

Price was absent Monday, and planning board chairman Patrick Emery could not say why.

In response to questions from the Sun, selectmen and Haley last week said planning board members are appointed and can be recalled under certain circumstances.

Selectmen’s chair Tom Klinepeter said he’s never seen a planning board member get removed and what Price did was “nothing” compared to the antics of other town officials he’s seen over the decades.

“I’ve seen behavior a lot worse than he’s describing, just on this board over the years,” said Klinepeter, adding 25 years ago he saw an elected road commissioner get into a fistfight with a plowing contractor.

Wonderful news if you are a sleepy stoner. We have to share the road with those people when we drive, ride a motorcycle ride a bike or drive a BIG scary truck. This is one of the reasons I will not ride my bicycle on the roads anymore. Too many stoned people.