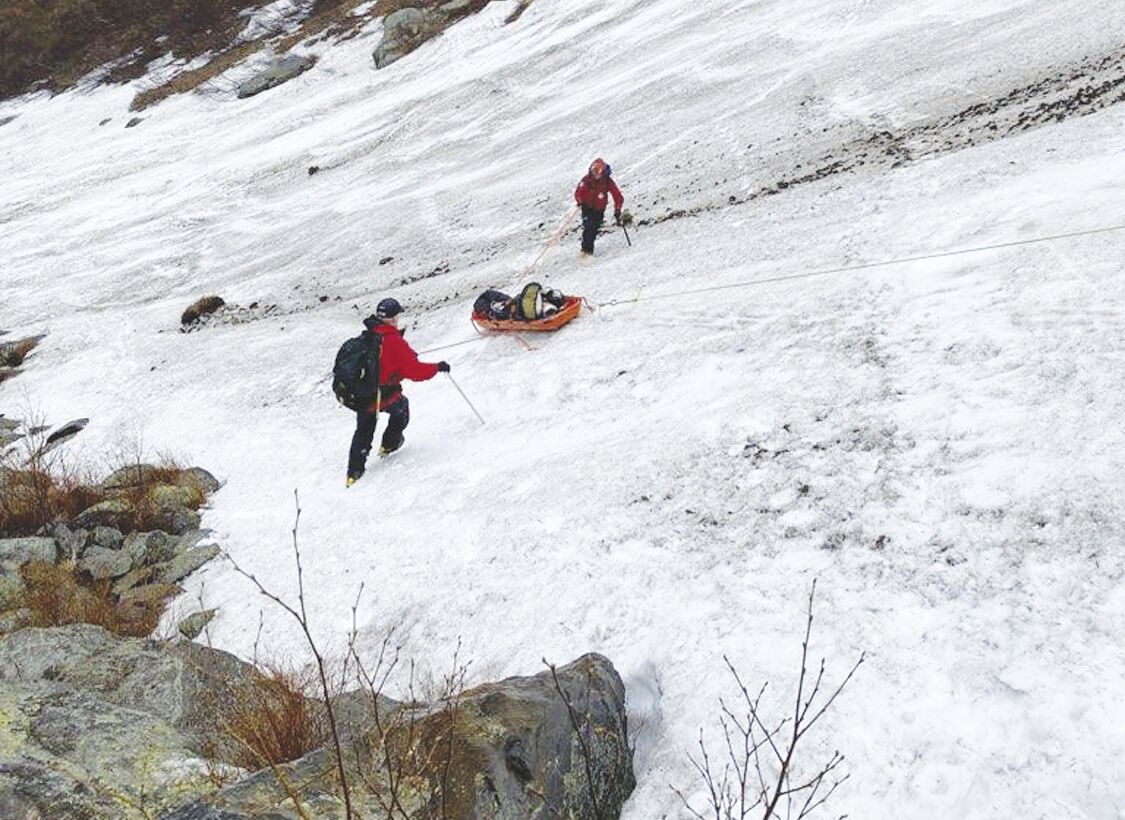 Rescuers bring James Shanley, 68, of Montpelier, Vt., down Tuckerman Ravine Sunday. Due to weather conditions, the only helicopter that could airlift him out was a Coast Guard Jayhawk from Weymouth, Mass. (PHOTO COURTESY MOUNT WASHINGTON AVALANCHE CENTER) 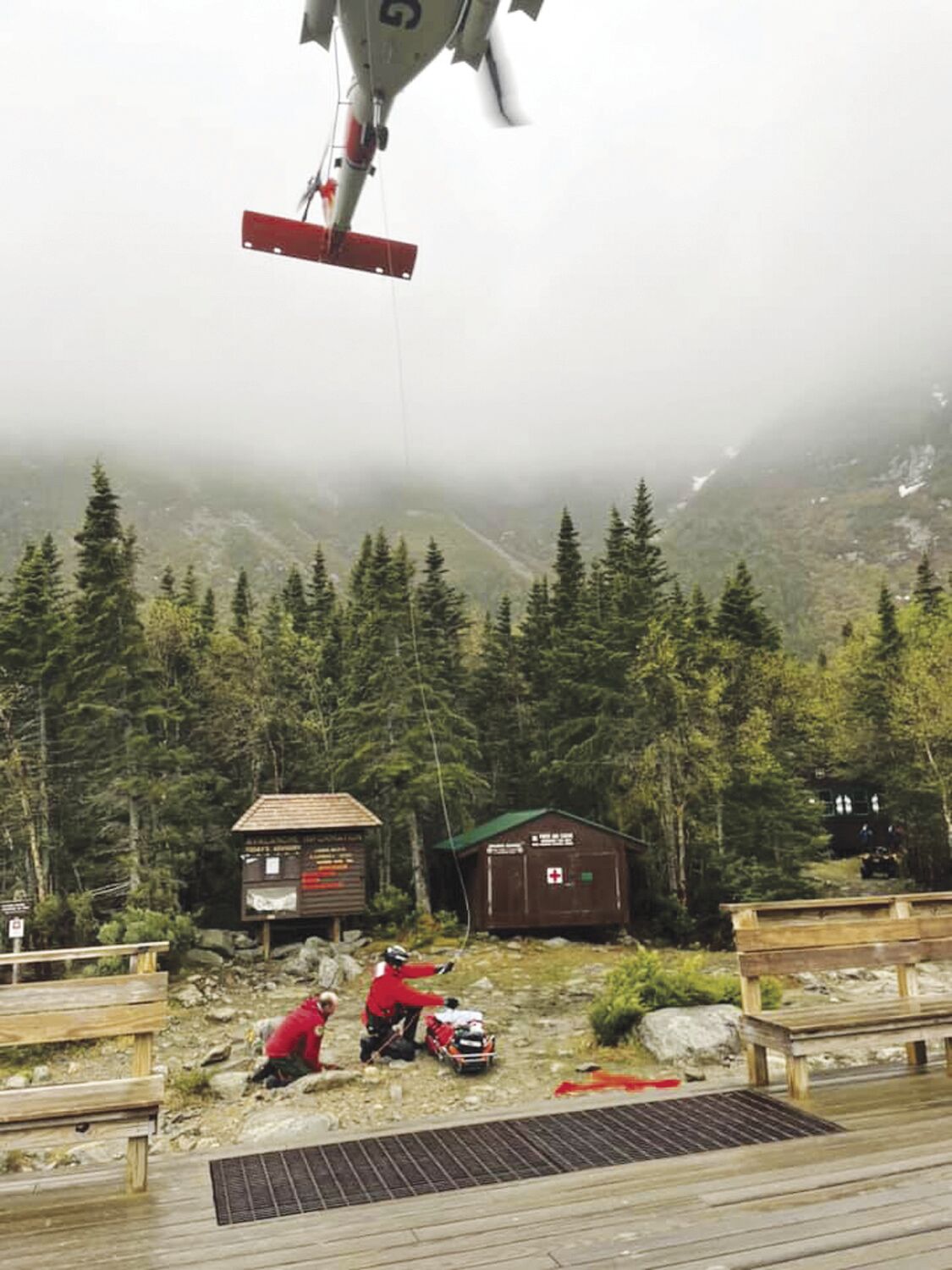 As rescuers assist on the ground, a Coast Guard Jayhawk lowers a rope to hoist a Vermont skier who was injured after hitting rocks in Tuckerman Ravine on Sunday. (COURTESY GORHAM NH FIRE & EMS)

Rescuers bring James Shanley, 68, of Montpelier, Vt., down Tuckerman Ravine Sunday. Due to weather conditions, the only helicopter that could airlift him out was a Coast Guard Jayhawk from Weymouth, Mass. (PHOTO COURTESY MOUNT WASHINGTON AVALANCHE CENTER)

As rescuers assist on the ground, a Coast Guard Jayhawk lowers a rope to hoist a Vermont skier who was injured after hitting rocks in Tuckerman Ravine on Sunday. (COURTESY GORHAM NH FIRE & EMS)

SARGENT'S PURCHASE — The Coast Guard was called to Mount Washington on Sunday to airlift an injured skier who had collided with rocks at Tuckerman Ravine.

According to a blog post by Mount Washington Avalanche Center Lead Snow Ranger Frank Carus, at about 1:20 p.m. Sunday, a Mount Washington volunteer ski patroller radioed to say that a skier had taken a "sliding fall" down a 35-degree snow slope onto a patch of rocky ground.

A group of skiers who happened to be there began rendering aid.

One of them used an Inreach Satellite communicator to alert New Hampshire State Police and the Department of Fish and Game of the incident. The ski patroller determined the man needed "immediate evacuation," said Carus.

The accident occurred when the skier and his son "climbed to the highest point of snow remaining, and the father slipped, sliding 400 feet or more into the jagged rocks currently exposed adjacent to the Tuckerman Ravine Trail, known as 'Lunch Rocks,'" said Carus. "The pair was not wearing crampons, which can be insurance against hard snow or obscured icy patches."

Fish and Game identified the injured man as James Shanley, 68, of Montpelier, Vt. Shanley was reportedly hiking up the ravine with his son before their third ski run.

At about 2:45 p.m., Gorham EMS ambulance and UTV headed up Sherbune Ski Trail to the patient while the ski patrol and a snow ranger used a litter and belay ropes to move him toward Hermit Lake.

"Weather factors made local air ambulance services unable to fly, but the U.S. Coast Guard 1st District was available for the mission," said Carus, who said the helicopter departed Weymouth, Mass., at 3:45 p.m..

"At 5 p.m., under a low ceiling at 4,500 feet, a Coast Guard Jayhawk arrived at Hermit Lake and hoisted the patient and a paramedic for the flight to the Level 1 trauma center in Portland."

As of Tuesday afternoon, Shanley was listed in fair condition at Maine Medical Center.

Carus described the man who fell as the father in a father son duo had been to the ravine before.

"The father ... has years of experience skiing in Tuckerman Ravine, but like many 'old school' skiers, tends to forget his helmet while skiing in the backcountry," said Carus.

Carus praised the work of the skiers who aided Shanley. "This group of 20-30-year-olds jumped in to assist, suffering in the cold drizzle to render first aid and then carry the litter to Hermit Lake where they then waited patiently to confirm that they wouldn’t be needed to carry the litter should the helicopter fail to arrive," said Carus.

"Anyone having an accident would be lucky to have this group of solid individuals to assist them."

Carus also praised the efforts of the rescue organization and mountain personnel involved.

"The efforts of the Mount Washington Volunteer Ski Patrol and the AMC Hermit Lake caretaker were also impressive with three veteran patrollers doing what they do to keep an injured person from succumbing to their injuries and to the elements," said Carus. "Be sure to thank a patroller and the caretaker when you see them. Thanks as well, to the NH Fish and Game officers and Gorham EMS personnel for their efforts in this mission."

The Coast Guard on its USCGNortheast Twitter handle was to release video of the rescue Tuesday afternoon.

Check the avalanche forecast at mountwashingtonavalachecenter.org for current avalanche and other mountain hazard reports.