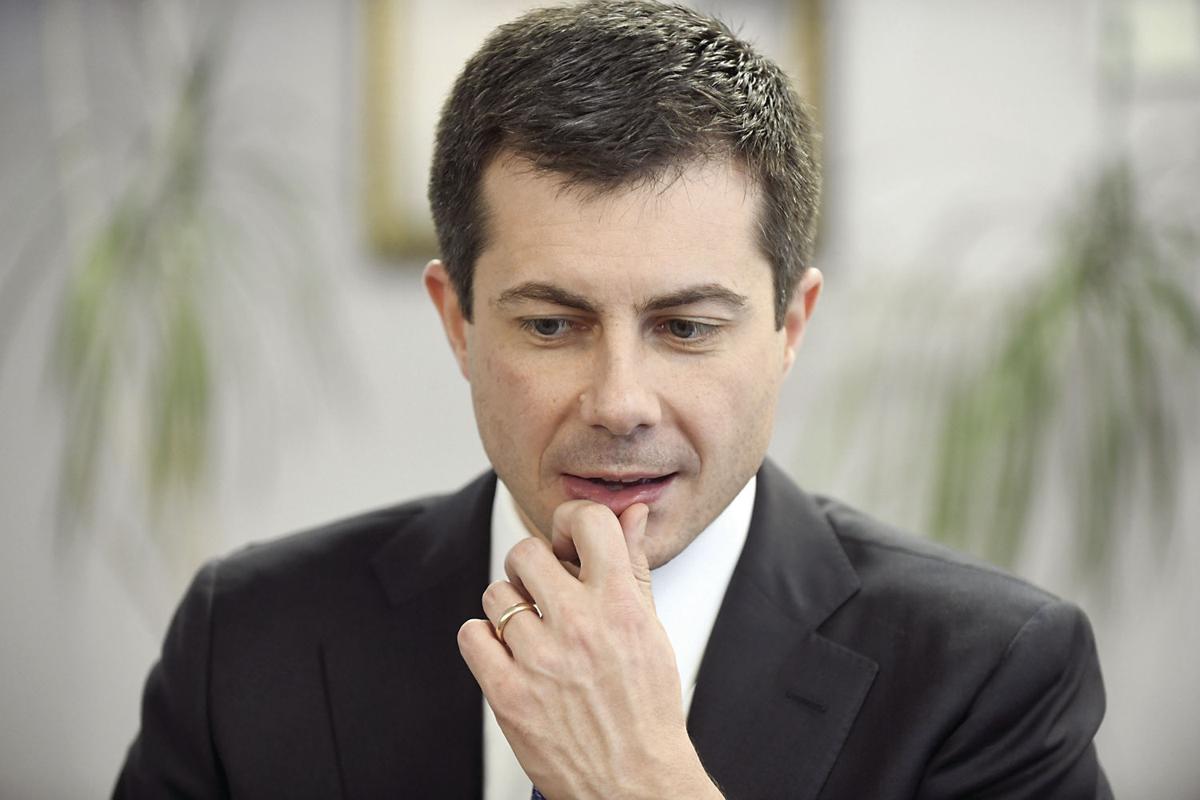 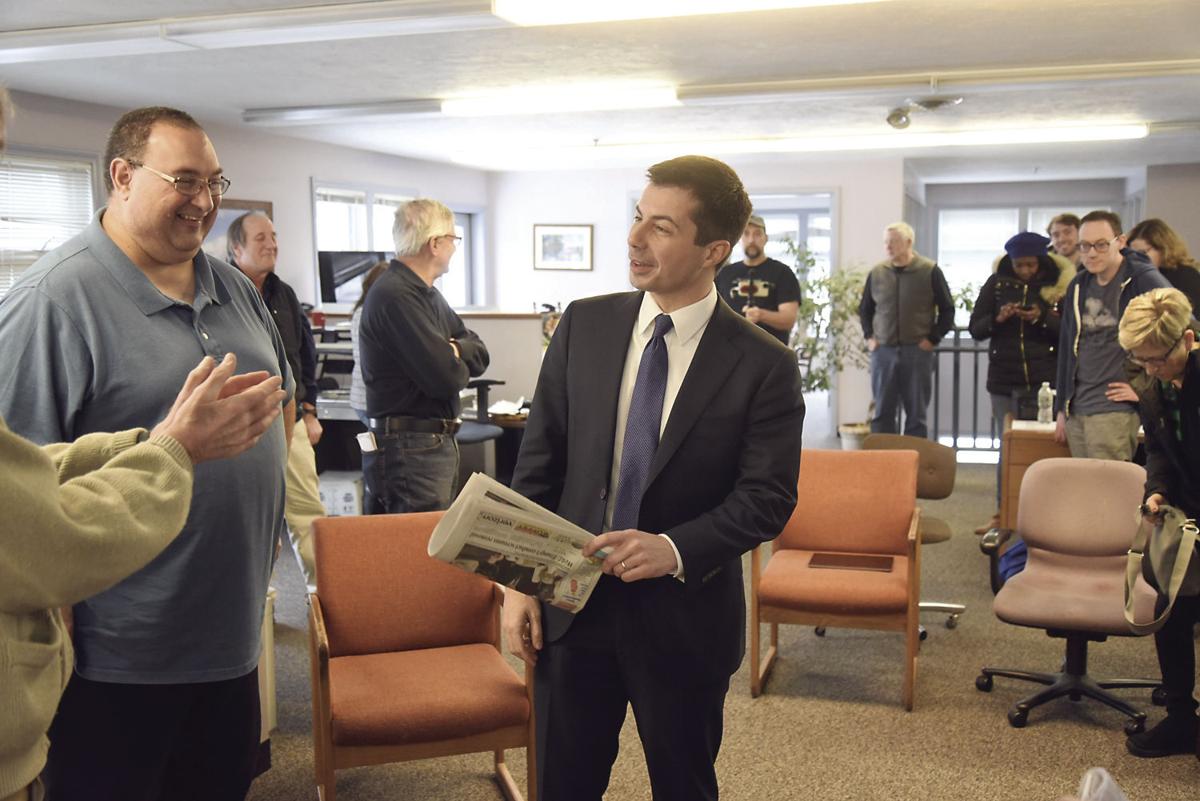 Presidential candidate Pete Buttigieg, the former Democratic mayor of South Bend, Ind., meets some of the editorial staff including reporter Lloyd Jones (left) as he arrives for an editorial board interview at the Conway Sun office in North Conway on Friday. (JAMIE GEMMITI PHOTO) 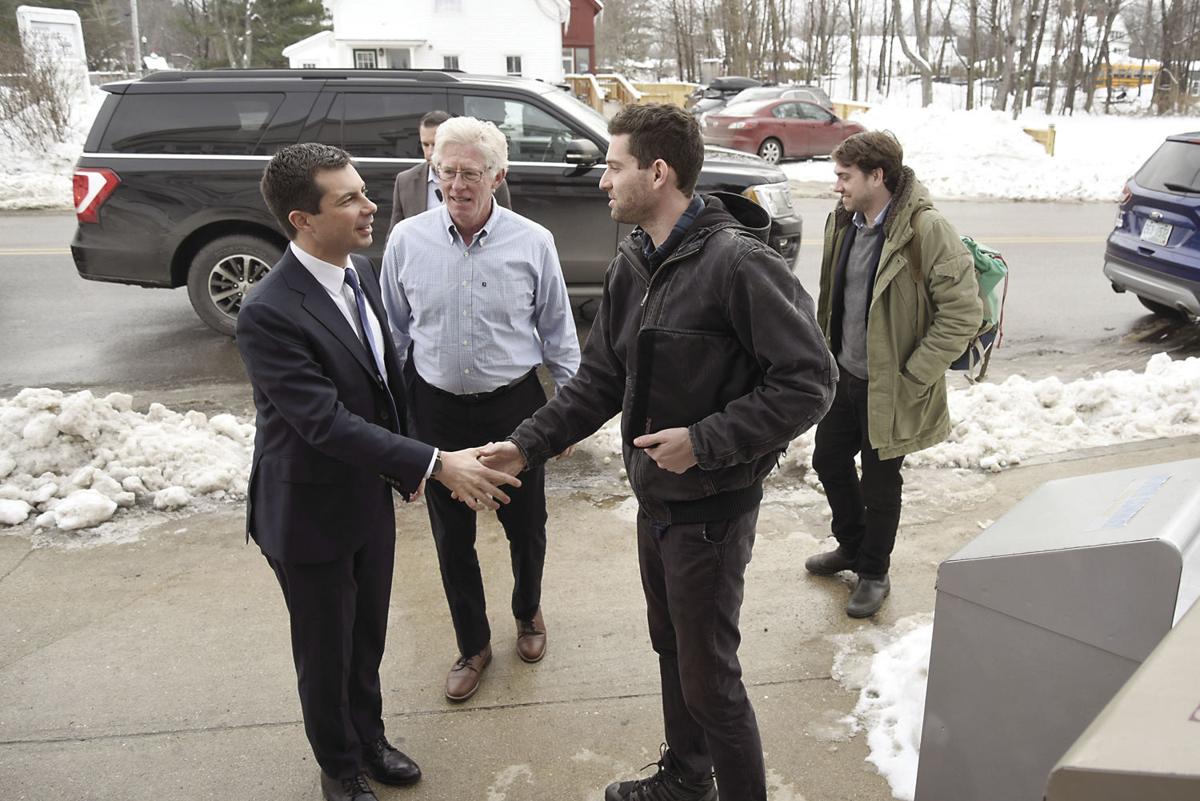 Democratic presidential candidate Pete Buttigieg (left) greets Brett Guerringue as he arrives for an editorial board interview at the Conway Sun office in North Conway on Jan. 3. Directly behind them is Sun Publisher Mark Guerringue. (JAMIE GEMMITI PHOTO) 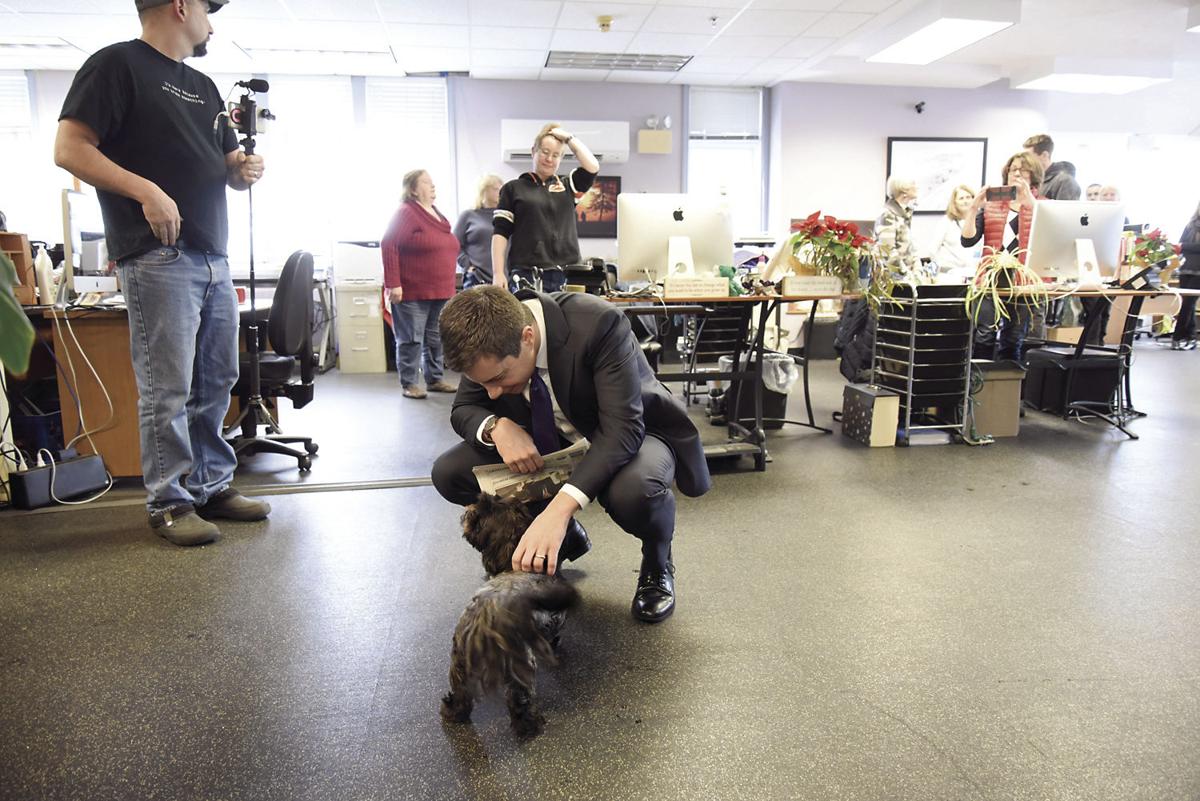 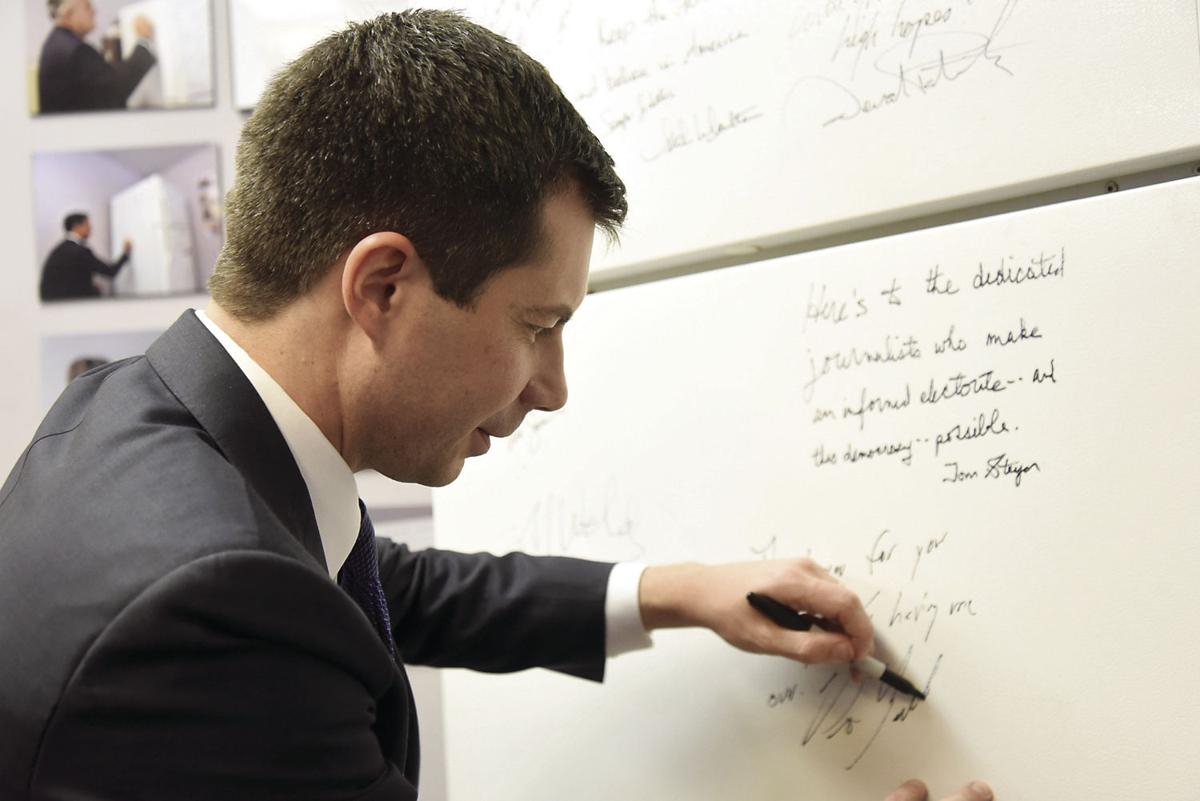 Presidential candidate Pete Buttigieg, the former Democratic mayor of South Bend, Ind., meets some of the editorial staff including reporter Lloyd Jones (left) as he arrives for an editorial board interview at the Conway Sun office in North Conway on Friday. (JAMIE GEMMITI PHOTO)

Democratic presidential candidate Pete Buttigieg (left) greets Brett Guerringue as he arrives for an editorial board interview at the Conway Sun office in North Conway on Jan. 3. Directly behind them is Sun Publisher Mark Guerringue. (JAMIE GEMMITI PHOTO)

CONWAY — Heading into the New Hampshire Primary, now just over five weeks away, Pete Buttigieg feels good about how his campaign is going.

The youngest candidate in the Democratic presidential field, the 37-year-old former South Bend, Ind., mayor believes he’s connecting with Americans who are seeking a change in their government.

“There’s no campaign I’d be trading places with right now,” he said during a Jan. 3 editorial board at the Sun that immediately followed a town hall-style meeting at the North Conway Community Center that drew a standing-room-only crowd (see related story).

“We are in a really strong position but also mindful of just how much can happen in a month in New Hampshire Primary politics,” he told Sun editors and guests that included former Pittsburgh Post-Gazette Executive Editor David Shribman.

The first openly gay Democrat to run for president, Buttigieg had recently announced that he had raised more than $24.7 million in the final three months of 2019, solidifying his standing among Democratic front-runners Bernie Sanders, Joe Biden and Elizabeth Warren, all of whom hope to take on President Donald Trump in the general election.

A veteran of the war in Afghanisgtan, Buttigieg addressed the news of the day, a U.S. drone strike that killed Gen. Qassem Soleimani, one of Iran’s top military figures, early Friday near the Baghdad Airport in Iraq.

“If there’s one thing we learned from Iraq, it’s that just because someone’s a bad guy doesn’t mean it’s a good idea to take them out unless you have a plan,” Buttigieg said.

He added: “Doing this ... on the soil of the third country is an extremely provocative act.

“I would have expected the administration to have a little more to say about being on top of the knock-on effects of this decision. And, so I’m very concerned about what this could lead to,” Buttigieg said.

From 2009-17, he served as an intelligence officer in the Navy Reserve, attaining the rank of lieutenant. In 2014, he was deployed to Afghanistan for seven months and was awarded the Joint Service Commendation Medal and Joint Meritorious Unit Award.

Buttigieg, who just wrapped up his second and final term as mayor of South Bend, said going from being the mayor of a medium-sized city is not necessarily a common blueprint to the Oval Office.

“I don’t think anybody runs for mayor in America, thinks, ‘Two terms, and then it’s right to the White House,’” he said. “At least not in the city like mine.

“Anytime you run for office ... you look at what you bring to the table that’s different from the others. And you look for a match. And I’ve followed that process in deciding to run for office.

“And what I see now is a country that is looking for new leadership that is eager to see a new generation step up, that cares about experience but also is skeptical of Washington. I see a generation of people who’ve served in the conflicts after 9/11 who have something unique to bring to decisions about war and peace that we’re facing once again, perhaps as a country.

“And I’m very mindful that at no other time in the history of the republic with somebody like me doing something like this be taken seriously. But I think it says a lot about our moment.”

Buttigieg and his husband, Chasten, a teacher, live in South Bend with their two rescue dogs, Truman and Buddy. Buttigieg said he came out after coming home from military service, which was right as he was running for a second term as mayor.

Buttigieg said he would never forget the look on his campaign manager’s face when he said, ‘Hey, I gotta tell you something that’s going to make your job a little more complicated.’”

But he said what wound up happening was, “we got a stronger vote the second time than the first, we got 80 percent of the vote. This was while Mike Pence was the governor of Indiana. And so what it tells me is that most people either didn’t care or were supportive and that the most important thing to most people was not anything in my life. It was their lives.”

Buttigieg said: “I think the fundamental question of every election is the voter’s question: ‘How’s my life going to be different if you’re president?’

“We have the best answer to that question,” he said confidently.

Buttigieg believes he may be the only candidate committed to having his Cabinet be at least 50 percent women — not only because it’s the right thing to do but because “it will be a leadership body that makes better decisions,” he said.

That said, “it’s rather unlikely that that’s anything that we’ll see concrete physical evidence of. ... But it’s certain that we should, as a curious species, always be looking at what’s going on around us trying to find an explanation.”

Asked which three people throughout history he would like to have dinner with, Buttigieg quickly selected late South African anti-apartheid activist Stephen Biko; Alexander III of Macedon (Alexander the Great); and Sally Ride, who became the first American woman in space in 1983.

The inscription he wrote on the refrigerator door: “Thank you for your work — and for having me over! Pete Buttigieg.”