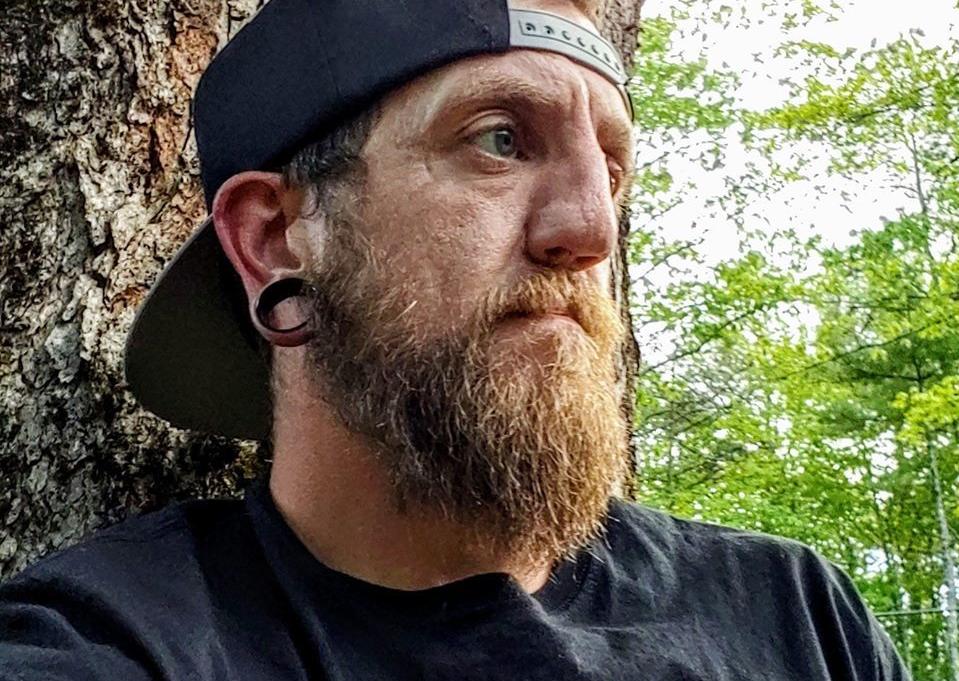 John Sparks of Freedom is the organizer of Sunday's planned "Black Lives Matter" protest, which is to go from the parking lot near The Met Coffeehouse in Settlers Green at 1 p.m., north on Route 16 to Schouler Park. The march and protest are being presented by the Northern New Hampshire Democratic Socialists of America. (COURTESY PHOTO) 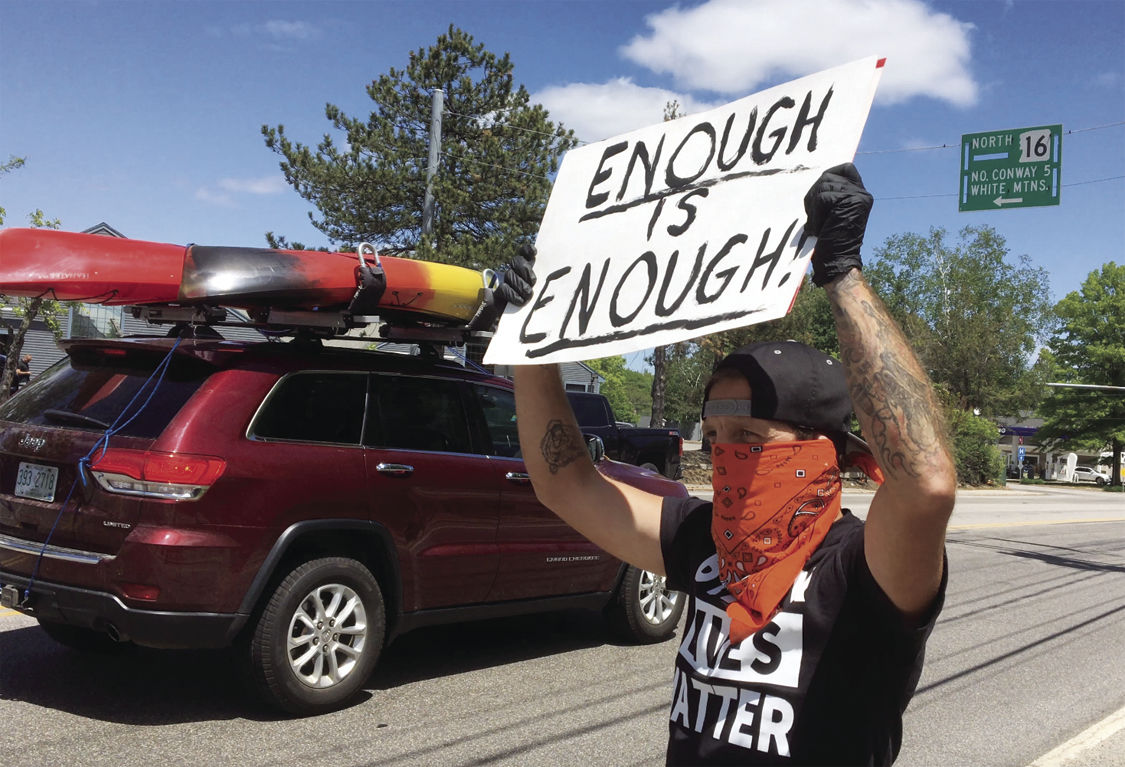 John Sparks of Freedom takes part in a Black Lives Matter protest in Conway on May 31. (TERRY LEAVITT PHOTO)

John Sparks of Freedom is the organizer of Sunday's planned "Black Lives Matter" protest, which is to go from the parking lot near The Met Coffeehouse in Settlers Green at 1 p.m., north on Route 16 to Schouler Park. The march and protest are being presented by the Northern New Hampshire Democratic Socialists of America. (COURTESY PHOTO)

John Sparks of Freedom takes part in a Black Lives Matter protest in Conway on May 31. (TERRY LEAVITT PHOTO)

CONWAY — Organizers and community officials alike are expecting another peaceful Black Lives Matter demonstration when the third such event in Conway is held on Sunday.

Organized by John Sparks of Freedom of the Northern New Hampshire Democratic Socialists of America, Sunday’s march will start at 1 p.m. from Settlers Green’s Met Coffeehouse parking lot and travel north on the sidewalk of Route 16 to Schouler Park in North Conway Village.

According to the Democratic Socialists of America website (dsausa.org), the national group is “the largest socialist organization in the United States. DSA’s members are building progressive movements for social change while establishing an openly democratic socialist presence in American communities and politics. At the root of our socialism is a profound commitment to democracy, as means and end.”

Sparks said his year-old, autonomous local six-member chapter expects to be recognized by the national organization “this week.”

In a letter to the editor published in Wednesday’s Conway Daily Sun, Sparks said, “We will fight for a world where black people can breathe freely and challenge ourselves to take greater responsibility for abolition, and the courage to pursue a just and liberated future. We demand no less than the total liberation of all oppressed people into human dignity, forever.”

In a followup interview Thursday, he made similar remarks, saying people are rising to protest the inequalities and injustices in American society following the death in Minneapolis May 25 of 46-year-old African-Amercian George Floyd while in police custody, and not just for those of color but for all working people in terms of being paid adequate wages, and having access to affordable health care and housing.

“My hope comes from knowing the people who show up at this are committed to the work that we owe one another to build a more inclusive, egalitarian community and also to expand that to the world at large,” said Sparks, who is employed in construction and who says his political conscience about workers’ rights and social inequities was awakened during his school years at Kennett High following the start of the Iraqi war in 2002.

“Seeing what was happening there (in the war in Iraq) and then working in low-wage jobs as long as I did and struggling with being a working class person, just trying to exist – that is what made me,” Sparks said.

He is a past Bernie Sanders for president supporter. “Yes, Bernie for sure. But oh, I’m way more radical than Bernie!” he said, adding, “Bernie’s not going to do it all for us — it’s going to take all of us.”

Conway and Settlers Green officials have been in touch with Sparks regarding this Sunday’s planned event.

“The first two protests have been peaceful with no incidents, and we are expecting the same for this Sunday’s,” said Conway Police Chief Ed Wagner Wednesday, referring to the coming protest. “We have spoken with Mr. Sparks and he certainly plans this to be a peaceful event and so do we. I told him to let us know if they needed anything such as help at road crossings.”

Conway Town Manager Tom Holmes said like the previous two protests, no permit is needed. “We do not have a permitting process for ‘protests.’ From what I remember from the letter in the paper, the one this Sunday is going to be a walking protest from Settlers to North Conway Village. That’s basically pedestrians on a sidewalk, albeit with signs.”

Dot Seybold, general manager of Settlers Green and Larry Flaherty, owner of The Met Coffeehouse at Settlers Green where the demonstration march will begin, both expressed support.

“Our management company welcomes peaceful protestors to use Settlers Green as a gathering point for their march to Schouler Park. We ask only that they spread out their parking so as not to clog any one lot and that they be respectful to our customers, our tenants and their employees, and to our property,” said Seybold.

She said she is not aware of any stores in the complex closing due to the protest though she said most stores there are yet to open.

On a personal level, Seybold said she supports the cause, noting, “George Floyd’s death at the hands of the police department of Minneapolis was the most horrible thing I have ever seen …”

Flaherty also was supportive of the event, saying, “I think it’s great that people are comfortable exercising their First Amendment rights and that we have a community that has always come together in expressing views on important social issues — such as Black Lives Matter.”

Sunday’s planned march and gathering follows two peaceful local protests held over the past two weeks. An estimated crowd of more than 200 attended the first, held May 31 in Conway Village. A second protest, held June 8 on Main Street in North Conway Village  brought out an estimated 500 people.

So sad to see these protests in the best country on Earth. Prejudice and Police brutality have dropped dramatically in the last several decades. Minority unemployment was the lowest it has ever been before the pandemic struck. There is nothing better for someones well being then having a job to go to every day rather than a hand out from the government.

It's to bad we have to see these protests here in N.H. I pray it doesn't turn into rioting like in the bigger cities. I stopped supporting BLM when the protesting went to violence and riots. I do, however support ALL LIVES MATTER!

Kinda ironic that the organizer is a proponent for socialism but lives in Freedom, a town in the Live Free or Die State.....