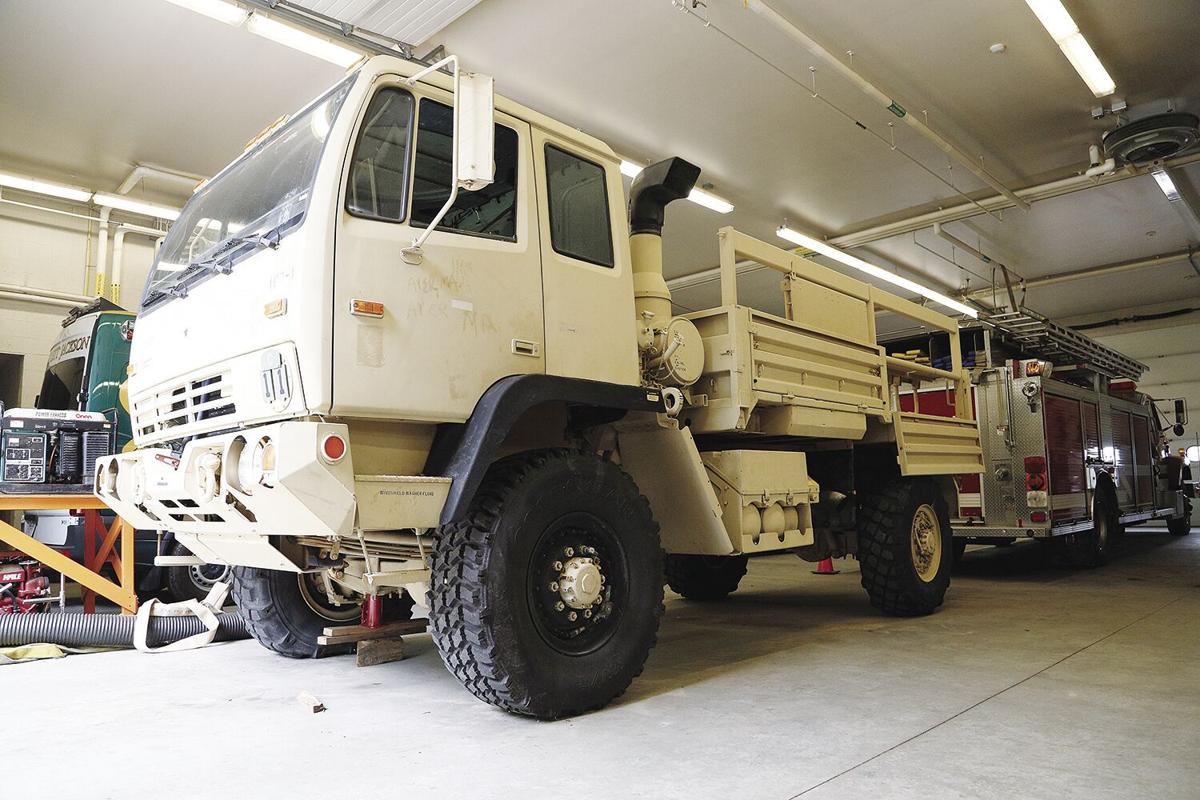 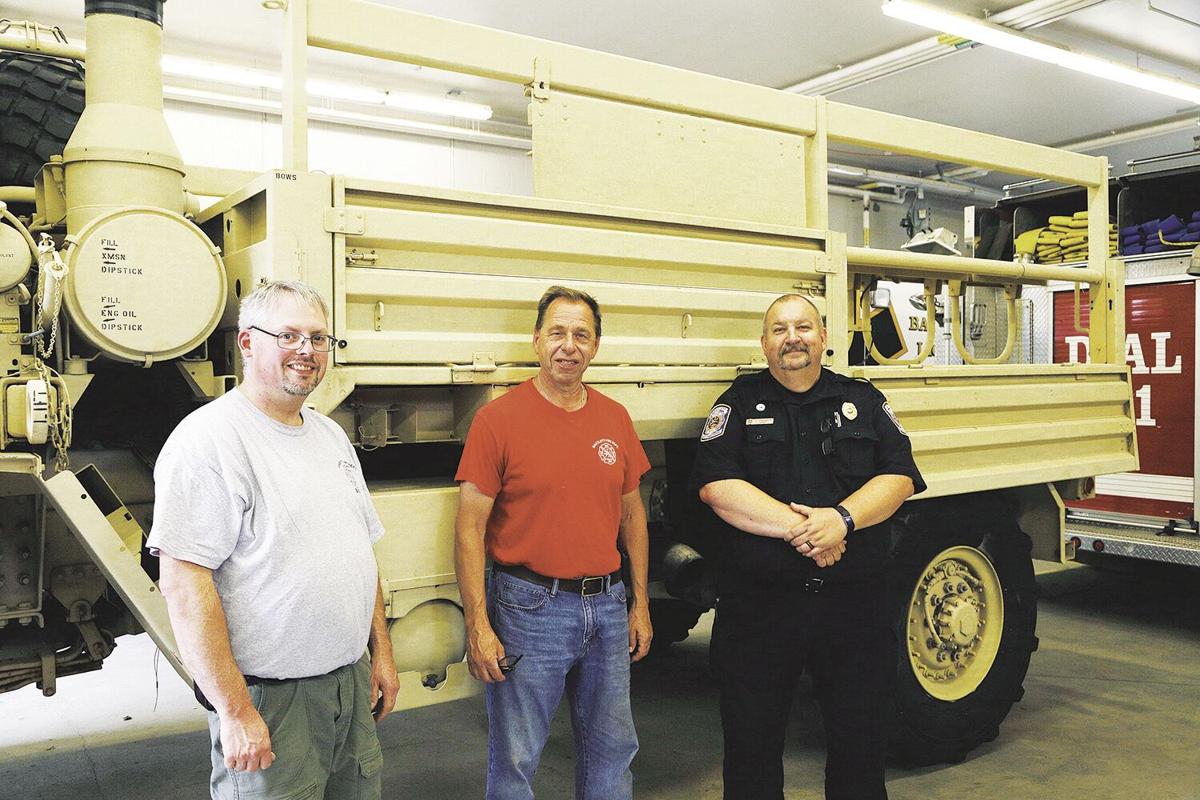 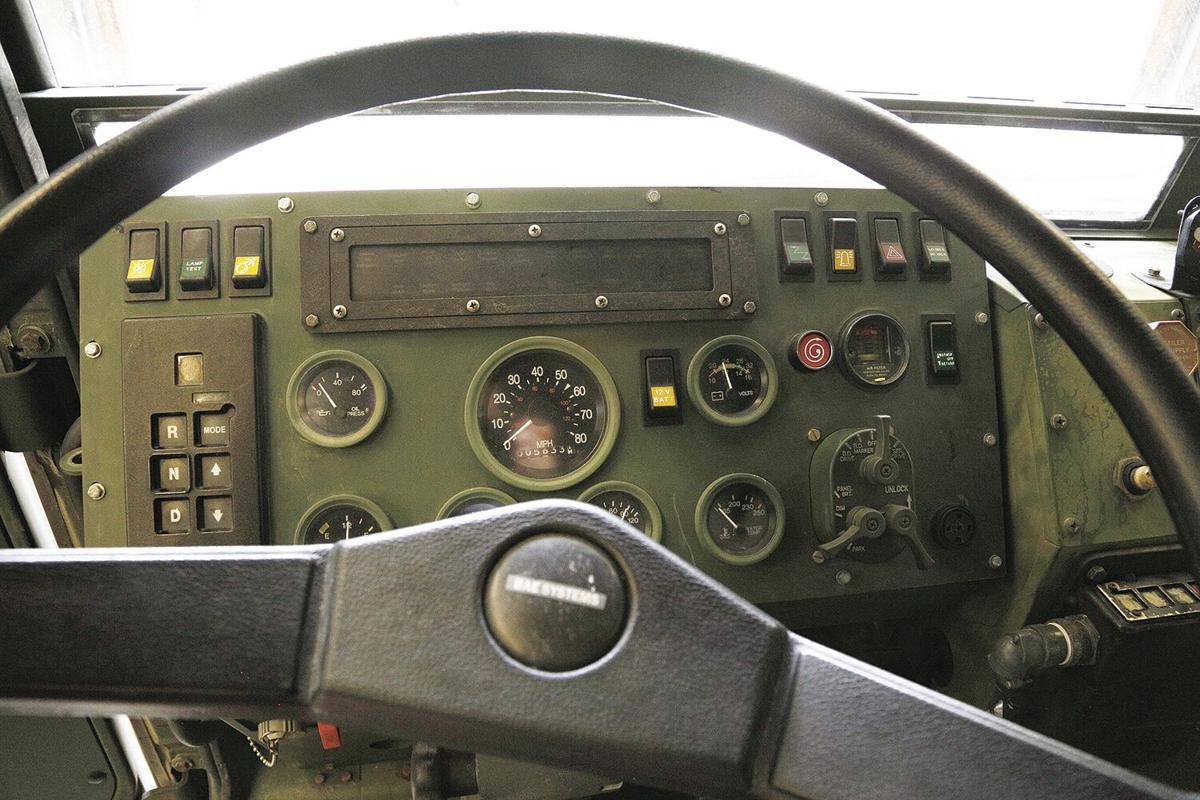 Switches and gauges fill the cab of the newly acquired firefighting vehicle at the Bartlett Fire Station on Tuesday afternoon. (RACHEL SHARPLES PHOTO)

Switches and gauges fill the cab of the newly acquired firefighting vehicle at the Bartlett Fire Station on Tuesday afternoon. (RACHEL SHARPLES PHOTO)

BARTLETT — The Bartlett Fire Department is one of five Granite State agencies to receive a wildland firefighting vehicle from the Federal Excess Personal Property Program through the state Forest Protection Bureau, and town officials are hopeful it can last as long as the vehicle it is replacing.

The last one the department got from the program was a 1957 Dodge, and was returned just two years ago.

To be eligible for the program, according to a release issued Tuesday by the New Hampshire Forest Protection Bureau, New Hampshire fire departments “must demonstrate a need for the vehicles as well as the ability to fund any retrofitting and maintenance costs.”

Bartlett’s vehicle arrived last month from Fort Devens in Massachusetts and is not yet on the road.

“All of the vehicles arrived with no license plates,” Currier said. “I have $3,400 in tires in Lancaster waiting to be put on it, but we’ve got to do some things before we’ll have it on the road. We’d been hoping to unveil in the parade on the Fourth of July.”

“Being able to facilitate getting these vehicles to New Hampshire and to then loan them to communities that can use their extra capacity will go a long way toward helping reduce potential wildfire damage in our state,” said N.H. Forest Protection Bureau Chief Steven Sherman.

“The cost to purchase them would total more than $1 million, so having them as part of New Hampshire’s wildfire fighting tool kit isn’t just good practice, it’s also a win from a fiscal standpoint,” he said.

Through the program, Currier explained, while his department receives its vehicle without any initial costs, “all the retrofitting and maintenance is our responsibility.” He said the Bartlett Fire Fighters Association has “been instrumental” in running a fundraising campaign to get the vehicle to where they want it to be. Dan Robinson is the association’s president, and Steve Hempel is the vice president.

“I can’t say enough about the Firefighters Association,” Currier said, “I manage the place and they do all of the work. We’re looking at probably in the neighborhood of $30,000 to outfit our vehicle.”

Firefighters will begin taking apart the vehicle today in order for it to be painted. Currently a tan color, it will be painted red and clearly display the N.H. Department of Natural and Cultural Resources logo. The cost of the paint job is between $7,000 and $8,000. J&T Auto Body of Center Conway is doing the work.

The department also needs to replace the skid unit that goes on it, said Currier, which will cost roughly $15,000.

“Our model holds a tank of up to 300 gallons of water, a pump and a hose reel,” he said. “There’s room for more hose and a toolbox to put all our (forest fire-fighting tools) in.”

Currier said the rank and file are converting some of the vehicle seating into additional toolbox storage.

“We don’t have any forestry hose. We don’t have any pump,” he said. “We need a high-pressure pump. We do have hand tools, but it’s time to replace some of those, which we’ve had for over 30 years. It needs some mechanical work. I’d like to see if there are any veterans out there who’d like to work on it.”

Other requirements of the loan include the vehicles must be housed indoors and be inspected every two years by the Forest Protection Bureau.

Currier said the vehicle is equipped to handle high waters and comes with a snorkel system on it. It also comes with auto inflate tires — if a tire was punctured, it could still be driven to safety.

The state Forest Protection Bureau, part of N.H. Division of Forests and Lands, according to its website, “is responsible for protecting 4.5 million acres of both public and private New Hampshire forestlands from the threat of wildland fire and crimes against the forest resource. This is accomplished by forest rangers, fire patrolmen, fire tower personnel and support staff as well as the forest fire wardens and deputy wardens serving in each community.”

From 2016-2020, according to the Bureau, the state experienced an average of 119 wildfires, impacting 276 acres annually.

Currier, who has been chief since last October, is excited about his department and wants to do his part to help grow it. The department has 23 people on its current roster.

The association has been working on a couple of other fundraisers for the department including additional seats for Engine 2.

As there are eight firefighters living in Bartlett Village, “they’re doing rock, paper and scissors to see who goes to the fire because we don’t have enough seats,” he joked, adding, “We’d rather them not take private vehicles to calls because they clog up the roads.”

Currier said the price of two air-pack seats complete with seatbelt and installation is approximately $5,000, but the association has purchased them.

“The association had existing funds in its account and we ordered them two months ago and should be here in August,” Currier said.

“The third fundraiser is a Firefighter Level I Class,” he said. “The state of New Hampshire, because of COVID-19, had their budget cut at the Fire Academy. They told me that they would put one on here if we could fund it. To fund a Fire I class for 24 people, we were initially told it would cost approximately $50,000. The state has reduced the cost immensely to the point where it’s looking like it will be a go in September.”

He added: “COVID slowed us down, but it didn’t stop us.”

Currier has eight people interested in taking the course, which is 212 hours long and takes about six months to put on. “It’s been a few years since we’ve had one in this area,” Currier said. “We’d invite Jackson, North Conway, anyone from Conway, and, if we had room, we could invite someone from Twin Mountain, they’re our neighbors, too.”

Anyone interested in supporting the Bartlett Fire Fighters Association can send donations to P.O. Box 656, Glen, NH 03838. The association is a 501(c)(3) non-profit organization.