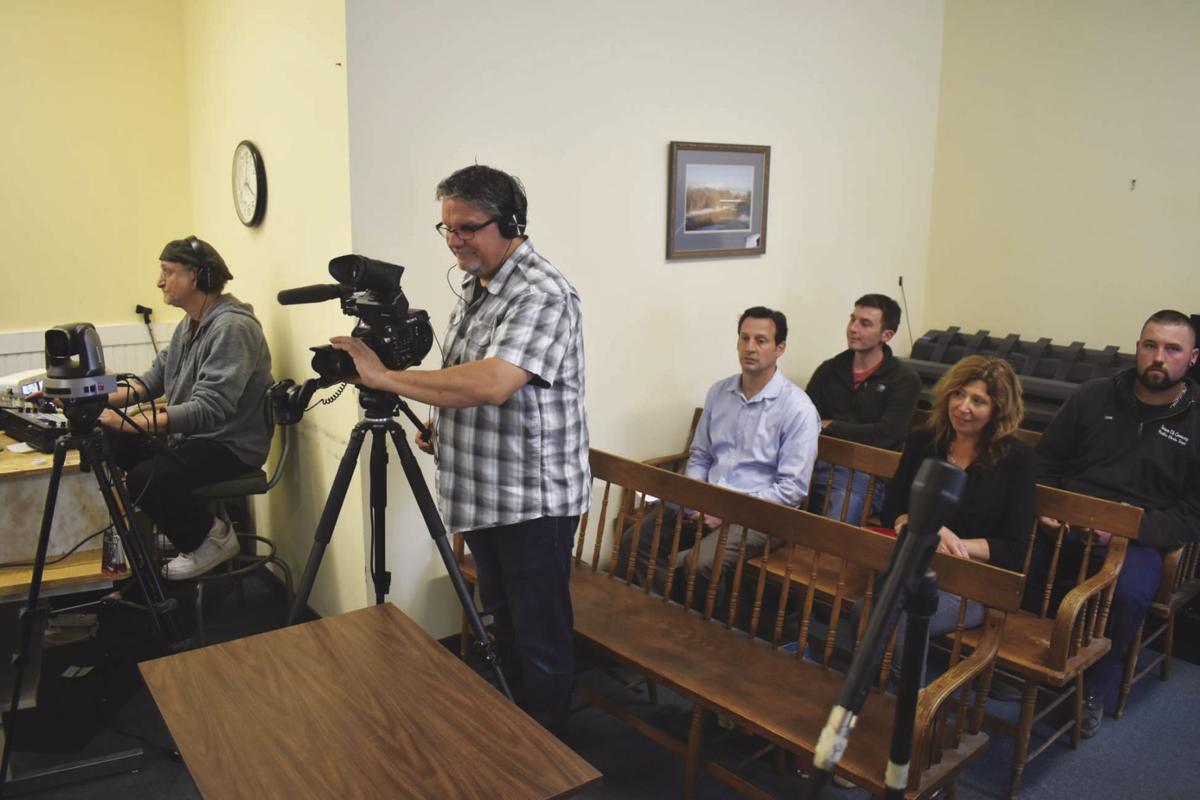 Filmmaker Jay Childs of Portsmouth (center) films the Conway selectmen on Oct. 8. Directly behind him are Andy Dean and Victoria Laracy of the Mt, Washington Valley Housing Coalition. At left is a Valley Vision cameraman. (DAYMOND STEER PHOTO) 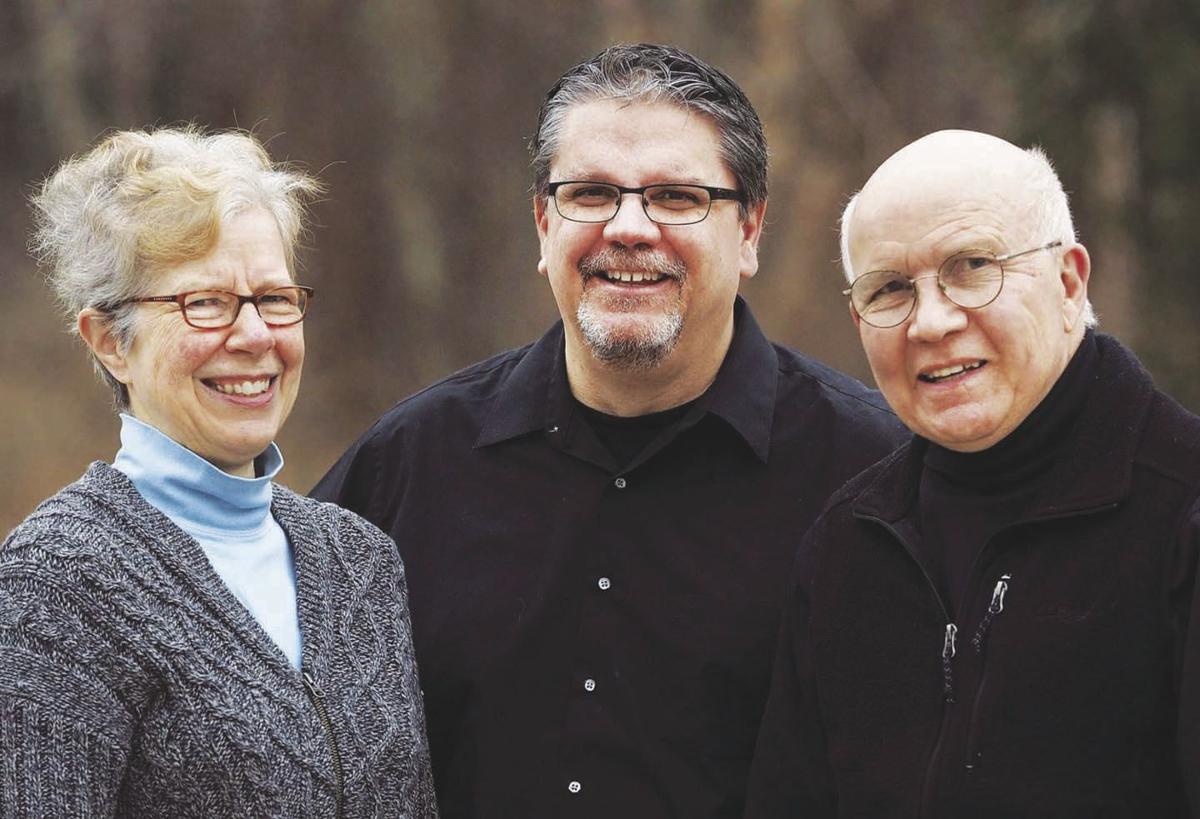 From left: Lorraine Stuart Merrill, Jay Childs and Peter Francese are reuniting after more than a decade to produce a sequel to their award-winning documentary "Communities & Consequences: The Unbalancing of New Hampshire's Human Ecology, and What We Can do about it." (NHPBS.ORG PHOTO)

Filmmaker Jay Childs of Portsmouth (center) films the Conway selectmen on Oct. 8. Directly behind him are Andy Dean and Victoria Laracy of the Mt, Washington Valley Housing Coalition. At left is a Valley Vision cameraman. (DAYMOND STEER PHOTO)

From left: Lorraine Stuart Merrill, Jay Childs and Peter Francese are reuniting after more than a decade to produce a sequel to their award-winning documentary "Communities & Consequences: The Unbalancing of New Hampshire's Human Ecology, and What We Can do about it." (NHPBS.ORG PHOTO)

CONWAY — Solutions to New Hampshire’s woes related to aging and lack of affordable housing is being explored in a new documentary to be released next year.

Efforts by a group in Conway to change zoning laws related to affordable housing are among the topics being covered by the filmmakers.

Over 10 years ago, a filmmaking team consisting of Jay Childs of Portsmouth, demographer Peter Francese of Exeter and former state Commissioner of Agriculture Lorraine Merrill of Stratham published a book and made a movie about the a declining young workforce.

Childs runs his own company in Portsmouth, JBC Communications, which “is an Emmy-honored collaborative group of talented award-winning filmmakers, and creative professionals with a passion for digital storytelling,” according to its website. He was named N.H. Filmmaker of the Year for his 2016 film “FOOD FIGHT — Inside the Battle for Market Basket,” and his 2000 film “Caring for Mo,” about a nurse’s battle with breast cancer, was nominated for an Emmy.

Behind the 2008 “Community & Consequences: was “the overarching concern was the fact that we, at the time, were the sixth-oldest state in the nation and trending to age more rapidly,” Childs, 54, told the Sun last week.

Today, he said, “in some ways, it’s gotten worse. We’re now the second-oldest state in the country.” The top three, Childs said, are Maine, New Hampshire and Vermont.

“Carroll County from a demographic point of view has a serious problem,” said Francese. The only population growth is in people 65 and older — every other age group is declining. “Who is going to take care of all the old people?” he asked.

The 2008 film also highlighted a life safety problem in older states: Without a lot of young people, there will be fewer people to work as emergency responders.

Then there is the housing crisis. In Carroll County, 42 percent of housing stock is used for recreational purposes, said Francese.

In the new 30-minute documentary, tentatively titled, Communities & Consequences II: Solutions for a State at Risk,” Francese said he believes Carroll County will make the cut.

He also said a whole chapter to the book will be about Carroll County.

Francese said the team plans to hold a community meeting in Carroll County next year to discuss demographic challenges.

Back in 2008, voters at town meetings across the state were taking actions like buying conservation land to prevent new homes from being built.

The filmmakers for the 2008 project interviewed a young couple, Gabe Washburn and Kate Preston, teachers with master’s degrees who lived in Keene and found it unaffordable. They decided that to make their future work they had to move to Indiana.

“The bottom line is economics,” said Washburn. “What it is, is (Preston) and I can go out there, make more money as teachers; we will receive a better salary, the cost of living is cheaper. At the end of the year, we’ll have more money saved. Economically, it makes complete sense.”

Francese, in the 2008 film, said that the number of people who move into New Hampshire from other states had declined from 2000-07, with more people moving out than moving in.

“One of the key aspects of our slowing growth is the decline in the 24-44 age group, the heart of our workforce,” he said, adding there has been been a dramatic influx of much older people.

“In large part, what triggered the idea of the sequel is people are really paying attention now to this issue because it was affecting the economy in what some have deemed the workforce crisis,” Childs said during the Oct. 29 phone interview.

Laracy told the Sun last week that since 2011, the median purchase price of a housing unit in Conway has risen by 49.5 percent and median apartment rents have gone up by 19.8 percent. In addition, residents age 55 or older have increased by 58.5 percent since 2000.

“There will be many solutions needed to address our housing crisis here in the valley,” said Laracy. “One thing we have explored is addressing our zoning and land use regulations and what obstacles there are to development of a diverse and healthy housing stock for all income levels.”

In addition to filming the selectmen, Childs also filmed a Sept. 16 meeting at Tuckerman Brewing Co. called “Policies and Pints” that included some talk about short-term rentals, Childs said.

The 2008 “Communities & Consequences” film starts out by showing town meeting day in Hart’s Location. Among the things the 15 voters discussed was a sign to promote Hart’s as being New Hampshire’s smallest town. At the time, it had a population of 45. As of the 2010 Census, the population had dropped to 41.

“Hart’s Location is the pure distilling of New Hampshire’s practice of local democracy right down to its essence,” says the narrator.

In the video, now state Rep. Ed Butler (D-Hart’s Location) is heard saying he would love that smallest town designation.

Butler, reached Tuesday, said Hart’s is still the smallest town and he’s pleased to know the documentary team is back at it.

“Refocusing on the issue will be a valuable lesson, again,” he said.

Childs, who said he “had a blast” in Hart’s Location, said the new film isn’t simply a “where are they now” follow-up to the original documentary, though there will be some overlap.

But he said the new film will stand on its own because he can’t assume that people saw the first project.

Childs said now the sequel highlights a new sense of urgency about the demographic shift of the Granite State.

“This story is more about the organizations that are really rolling up their sleeves, working toward solutions,” he said.