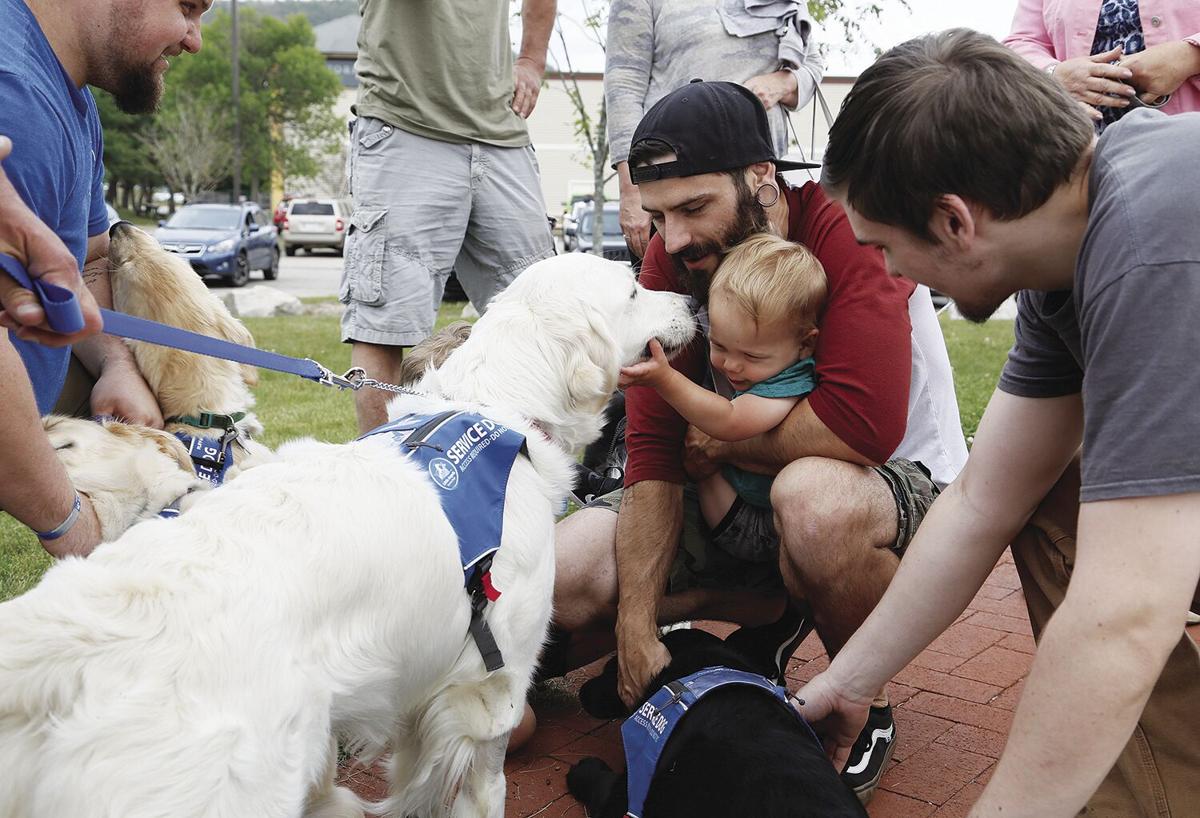 Van Ferguson, 1, and dad, Josh, pet service dogs Olaf, Elsa, Tessie, and Mocha, held by Little Angels Service Dogs operations manager Spencer Simms (left) and administrator Ryan Drew (right), at the "Pups and Pints" event at Barley and Salt in Settlers Green Streetside on June 25. All dogs in attendance got a free dog treat, and dog owners got a token for a discounted pint at Barley and Salt or a free pint of ice cream at Trails End Ice Cream. The Ferguson family was on a visit to North Conway when they happened to pass by the event in Settlers Green. This event occurs on the last Friday of every month. (RACHEL SHARPLES PHOTO) 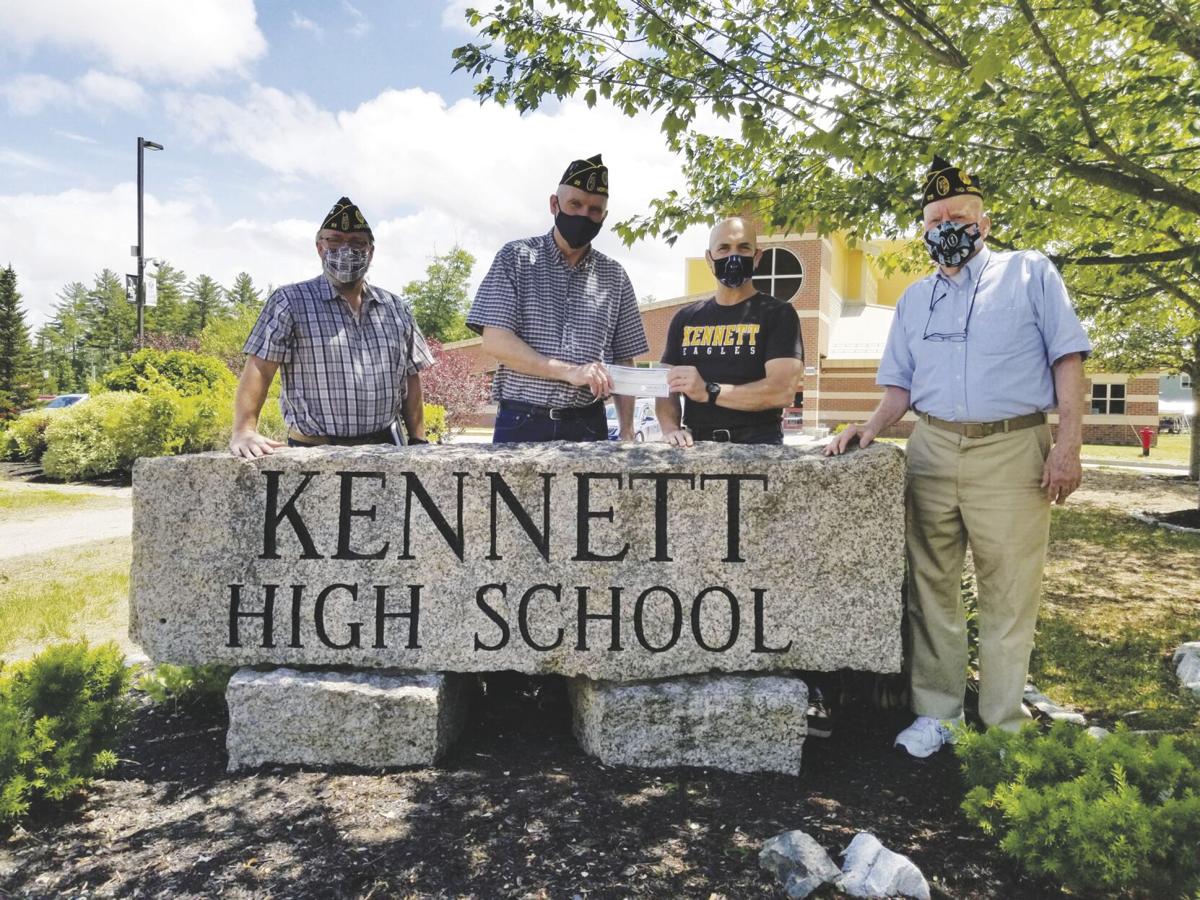 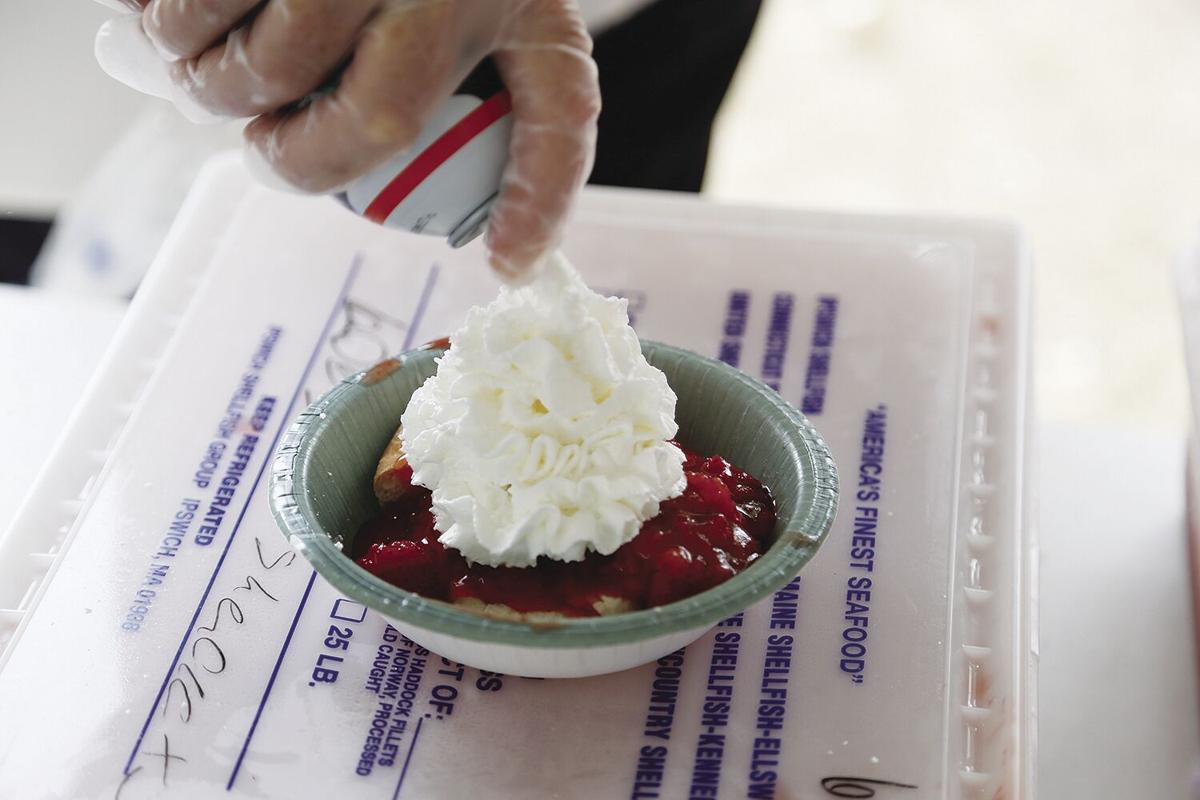 Lucy Howland puts the finishing touch of whipped cream on a strawberry shortcake at the annual Strawberry Festival at the First Church of Christ, Congregational and Vaughan Community Services in North Conway on June 25. (RACHEL SHARPLES PHOTO)

Van Ferguson, 1, and dad, Josh, pet service dogs Olaf, Elsa, Tessie, and Mocha, held by Little Angels Service Dogs operations manager Spencer Simms (left) and administrator Ryan Drew (right), at the "Pups and Pints" event at Barley and Salt in Settlers Green Streetside on June 25. All dogs in attendance got a free dog treat, and dog owners got a token for a discounted pint at Barley and Salt or a free pint of ice cream at Trails End Ice Cream. The Ferguson family was on a visit to North Conway when they happened to pass by the event in Settlers Green. This event occurs on the last Friday of every month. (RACHEL SHARPLES PHOTO)

Lucy Howland puts the finishing touch of whipped cream on a strawberry shortcake at the annual Strawberry Festival at the First Church of Christ, Congregational and Vaughan Community Services in North Conway on June 25. (RACHEL SHARPLES PHOTO)

HAPPY FOURTH OF JULY WEEKEND to all you fellow Yankee Doodle Dandies, as those of us who have had our vaccinations can once again gather for cookouts, parades and fireworks.

We join Americans of all political stripes and persuasions in saluting Uncle Sam and wishing the Red, White and Blue a very happy 245th!

President Joe Biden is encouraging everyone to get their vaccinations (we join him in that message). First lady Jill Biden will be in Portsmouth today for an Independence Day barbecue with U.S. Sen. Jeanne Shaheen (D-N.H.) at a private barbecue as part of the Biden administration’s “Americans Back Together “ celebration.

In terms of celebrating in the valley, you’ll find everything you need to know in colleague Lloyd Jones’ Fourth of July roundup elsewhere in this edition.

THIS JUST IN: Tamworth canceled its fireworks from Friday on account of rain to next Saturday, July 10, at the K.A. Brett School.

JULY FOURTH FICTION OR FACT(S): A highlight of this trivia-loving reporter’s weeks is tuning in every Friday to WMWV’s “Morning Show” at 8:30 a.m. to hear “Fiction or Face from George Cleveland’s Almanac,” sponsored by Dave and Sue Hausman of Big Dave’s Bagels & Deli.

George and “Morning Show” host Roy “the Skiing DJ” Prescott each week banter as George shares his knowledge from the back of his always curious and creative brain on fascinating tales about the universe.

This past Friday’s Fourth of July preview edition topically enough featured George’s litany of trivia about the Fourth of July — one of which was that the Declaration of Independence was actually signed a month after the Fourth.

We looked it up on the internet, and George is right:

According to the Wikipedia, “the final draft of the Declaration was approved by the Continental Congress on July 4, although the date of its signing has long been disputed. Most historians have concluded that it was signed on Aug. 2, 1776, nearly a month after its adoption, and not on July 4 as is commonly believed.”

So, Happy 2nd of August to you and your favorite firecracker!

SOME OTHER FASCINATING FOURTH FACTS: George (who is, as we know, grandson of President Grover Cleveland, our nation’s 22nd and 24th president), also queried Roy in their on-air segment:

Q: What city was the first capital of the United States? A: New York City.

Q: Who was the first president to live in the White House? A: John Adams.

Q: Who was the first president to declare war? A: James Madison.

Q: What war did this declaration begin? A: The War of 1812 against Great Britain.

Q: What does macaroni mean in “Yankee Doodle Dandy?” A: To be “macaroni” was to be sophisticated, upper class and worldly. In “Yankee Doodle,” then, the British were mocking what they perceived as the Americans’ lack of class. The first verse is satirical because a doodle — a simpleton — thinks that he can be macaroni — fashionable — simply by sticking a feather in his cap.

Q: Which two presidents of the United States died on July 4th of the same year? A: John Adams and Thomas Jefferson.

Q: What is the location of the nation’s oldest Fourth of July parade? A: Bristol, R.I.

Q: What was the Statue of Liberty’s official name? A: Liberty Enlightening the World (hmmm, not Grace, Gertrude, Emma or Florence?).

Q: During World War II, where did the Declaration of Independence get stored? A: Fort Knox.

BATTLE OF THE BANDS: Today, Hog Coliseum behind the North Conway Community Center will host the second annual Battle of the Bands for the benefit of the Kevin Peare Memorial Skate Park.

Slated to perform at the event, which is set for 1-4 p.m., are One Dan Band, winner of the first Battle of the Bands held at Cranmore Mountain in 2019, as well as Unknown, the Lazy Anarchists, If You’re Down Str8 Bummin, Unforgiven and Kev and Cam.

Bands will perform three to four songs each, doing originals or covers. They will be critiqued by judges Dan Lettre, Brian Charles and Dustin Farnum, and a winner will be chosen.

Tickets are $20 per person and available on goskate4kev.com. Attendance will be limited to 200, according to the website.

Food trucks and vendors will be on site, and skateboarding demos and merchandise will be on hand provided by Red Alert, according to organizers Caren Peare of Bartlett, executive director of the Kevin Peare Memorial Skate Park Committee, and Anna Peare of Conway, assistant director.

IN OTHER MUSIC, outdoors at Tuckerman Brewing Co. in Conway, check out Shark Martin today and Junco on Sunday, both from 3-6 p.m. with the return of the Simon Crawford Band Friday, July 9, from 4-7 p.m.

More Local Drama (great name for a band, isn’t it?) is at Ledge Brewing Co. today in Intervale beginning at 6 p.m., and Doug Hazard and Jono Deveneau are there next Friday evening.

Deacon Street has Dennis and Davey on Fridays and Saturdays; American Legion Post 46 in Conway has the Echo Tones July 4, 3-6 p.m. and July 9 starting at 6 p.m.

Mike Malkin and Becca Deschenes of Rek-lis are at the Shannon Door Pub tonight and tomorrow, and Riley Parkhurst is there July 9.

SWEET STRAWBS: Hope you had a chance ot make it to the well-attended Vaughan Community Services Strawberry Festival, held last Saturday on the grounds of the First Church of Christ Congregational in North Conway.

I especially enjoyed chatting with Howard Hatch of Albany, who oversaw the display of two of the late S. Jean Fernandez’s Woody Wagons. Howard, 81, worked for the late and legendary Verland “Swede” Ohlson and Homer Emery at the USFS’ Saco District back in the day and had all sorts of stories about fighting forest fires and the like.

One woman offered to buy the ’49 Plymouth Woody on display, but Howard noted on behalf of the Fernandez estate it wasn’t for sale.

HAPPY FOURTH OF JULY! We’ll be blasting you, as Major Mudd used to say when we were kids watching his TV show growing up near Boston. So, have a hot dog this patriotic weekend and celebrate being together.

https://www.animal-ethics.org/how-fireworks-harm-nonhuman-animals/ Very sad that thousands of animals are forced to endure what we as humans take for granted. If fireworks can kill some, terrify many, cause veterans with PTSD to have anxiety, is it really worth it when so many other ways to celebrate exist including what other countries are doing in silent fireworks . Rapid gunfire in the sky with toxins dropping everywhere and impacting others who have no say??? So American.

Same old story, out with the old and in with the new. Plus change which we all find hard to happen at times. That all being said, I am not liking the new online format. We shall see and time will tell how it all works out.