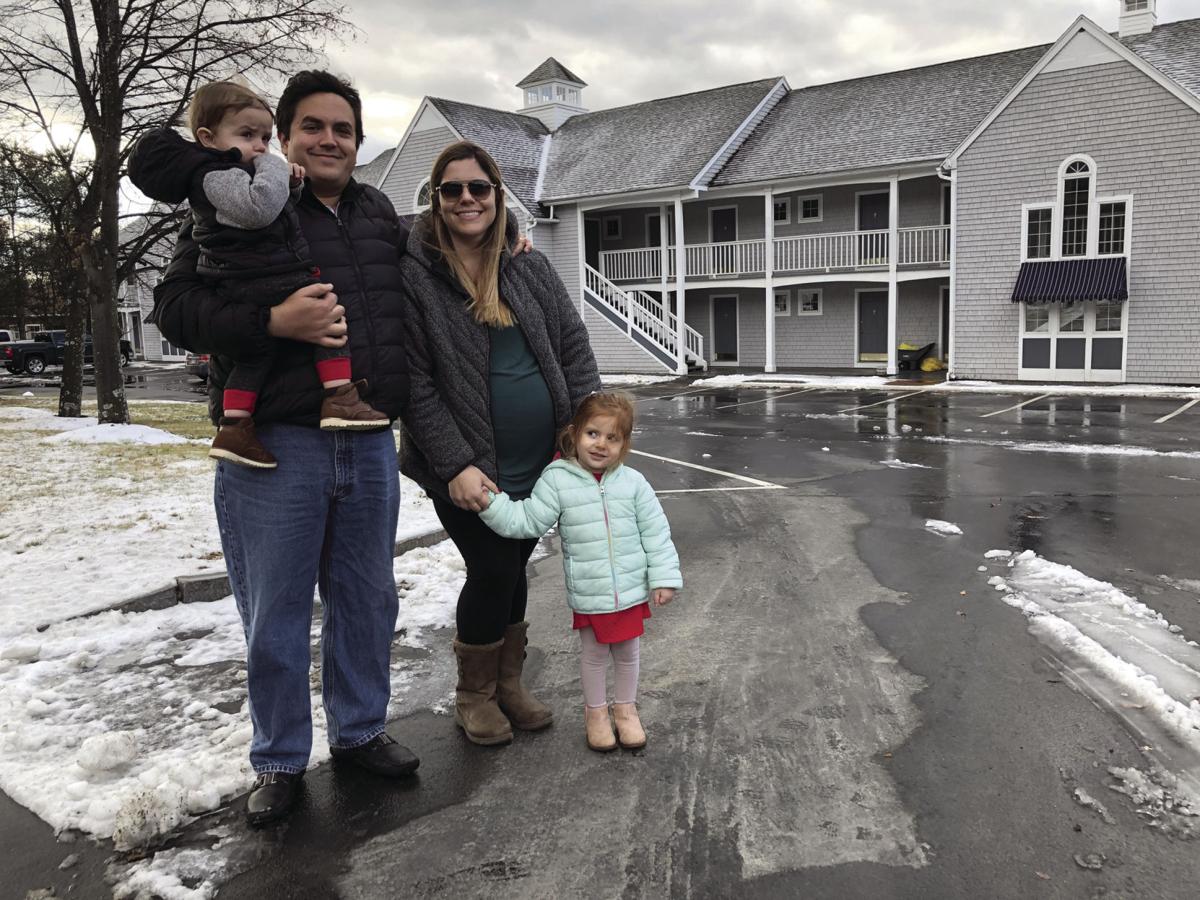 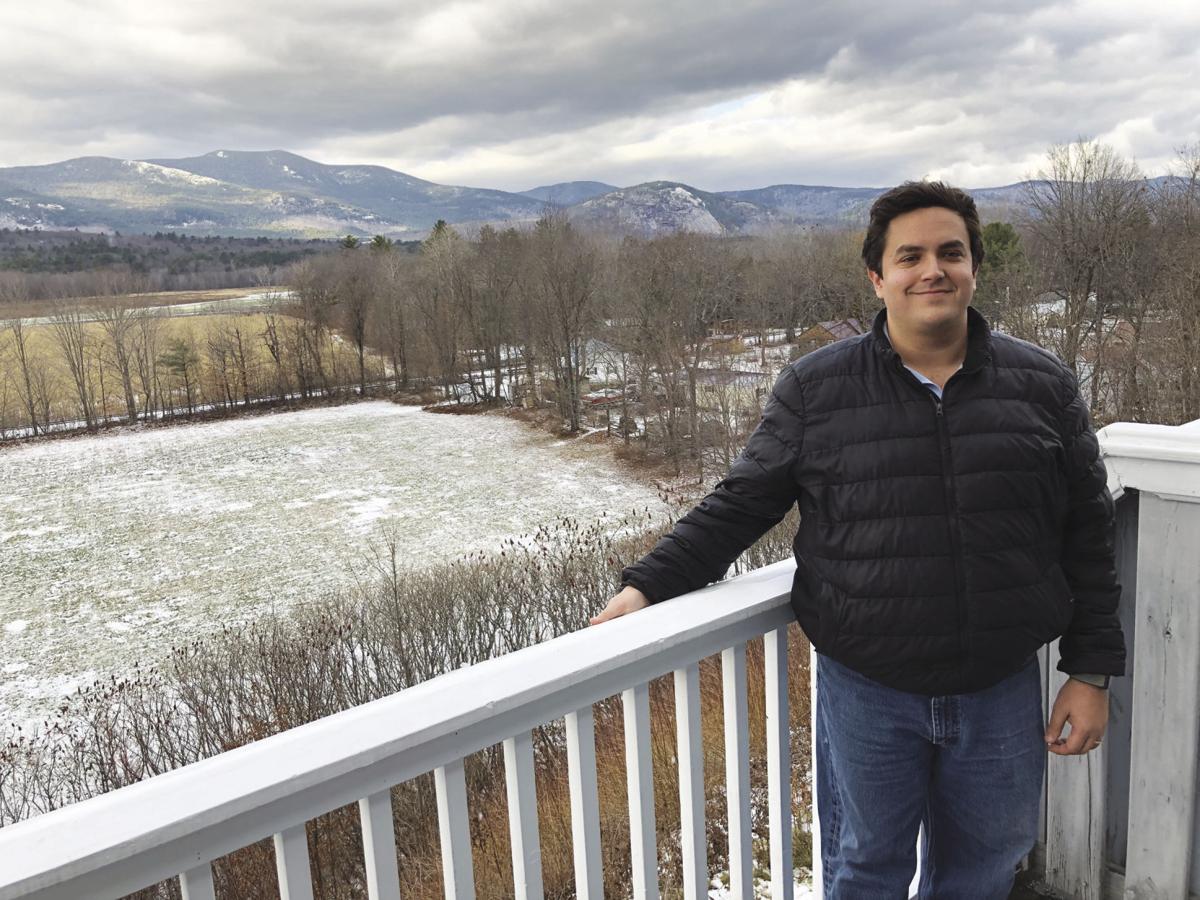 Proprietor Royce Bellini (above) shows the views to the Moats in the west as seen from the deck of the North Conway Mountain Inn. (TOM EASTMAN PHOTO)

Proprietor Royce Bellini (above) shows the views to the Moats in the west as seen from the deck of the North Conway Mountain Inn. (TOM EASTMAN PHOTO)

CONWAY — On Nov. 14, the Bellini family — owners of the School House Inn of North Conway — purchased the North Conway Mountain Inn next-door, putting both lodging properties under the same management and ownership.

“It makes great operational sense to own two inns side by side,” Royce Bellini, 31, told the Sun this week. “Having bought the School House property last March, we were looking to make other investments in North Conway — what better place than next-door?”

All rooms come equipped with mini refrigerators, coffeemakers and flat-screen TVs, and there is WiFi at both establishments.

The School House has an in-ground pool that is open in season as well as five seasonal cabins with porches. The North Conway Mountain Inn offers great views of the Moats from all guestrooms, which each comes with a private deck.

They employ a staff of 12 full-time employees, including Alicia Carter, now in her 17th year as manager of the North Conway Mountain Inn.

In 1963, hotel room wings were added on either side of the original schoolhouse. For a time, it was known as the Adora Motel, before the current name was chosen by previous owners.

The most recent owners were Eva and Dennis Love, from whom the Bellinis purchased the property.

“Along with Junge’s, which is now closed, the School House is one of the oldest continuously operated motels in the valley,” said Bellini. “We have people coming all the time who say they spent their honeymoon here, or that they have been coming here for years. They love the friendliness of it and we are proud to continue that tradition.”

The North Conway Mountain Inn has a much more recent history: Built in 1989, it has had only three owners: Gulden Lloyd of New York City, who built it; Peter Atwood of Scarborough, Maine; and now the Bellinis.

Realtor David Haine of David R. Haine Real Estate of Conway served as buyer’s and seller’s representative for the School House sale. Haine also facilitated the sale of the North Conway Mountain Inn by Atwood to the Bellinis earlier this month.

“I will say that the North Conway Mountain Inn has some of the best views in the valley, bar none,” Bellini said.

That property, which has frontage on the Conway Scenic Railroad tracks, also has lower acreage that Bellini someday hopes to develop.

“We love North Conway. My father took us here for years from Rhode Island growing up — the people, the mountains, the shops, everything about it. We are thrilled to be here, as it is a great place for my wife and I to raise our children,” said Bellini.

He and his wife, Dr. Samantha Bellini, a psychologist, have a daughter, Bridget, 3, and a son, Enzo, 1½, and are expecting their third child in February.

They previously lived in Florida, where Royce’s family was involved in real estate investments as well as hotel management. Then they stayed at the School House Inn last Christmas season on their way to visit Santa’s Village in Jefferson.

“We were looking for an investment in North Conway, and we inquired if the School House was for sale,” said Bellini. That led to their purchasing the inn. Shortly thereafter they bought a home at Hale Estates.

Since March, they have enjoyed their life as innkeepers. In addition to repeat guests, the School House has attracted an array of visitors from as far away as Asia, Europe and Australia, Bellini said.

“We still have our primary market of Massachusetts and Rhode Island, but it was amazing to see our guests coming last fall from Taiwan and China and other places from far away,” he said.

“Both the School House and the North Conway Mountain Inn had their busiest seasons ever this past year,” he added proudly.

“We are looking to invest in other properties in North Conway as well,” he noted.

Despite the trend toward larger chain hotels in North Conway as well as a growing short-term rental market, “I think people are looking for that down-home friendliness, and they find it here,” said Bellini.

They aren’t total strangers to the valley. Bellini’s mom Amitie Bellini, and her late husband, Anthony Bellini, have been bringing the family to North Conway for decades, first from Rhode Island, and later from Florida when the family moved there. They owned a home in North Conway that once belonged to local Realtor Nubi Duncan’s family near the Colonial Motel.

They have another tie to the region: Bellini’s late father was a good friend of the late Vito Marcello, a fellow Rhode Islander and father of the younger Vito, owner of Vito Marcello’s Italian Bistro of North Conway (and recently named Restaurateur of the Year by the N.H. Lodging and Restaurant Association).

“When the Marcello family first came to North Conway to open a restaurant here in the late 1980s,” Bellini said, “there already existed a restaurant named Marcello’s, so Vito’s father asked my father if it would be OK to name his restaurant after him. So, for a while, it was known as Bellini’s.”

The two families remain close to this day.