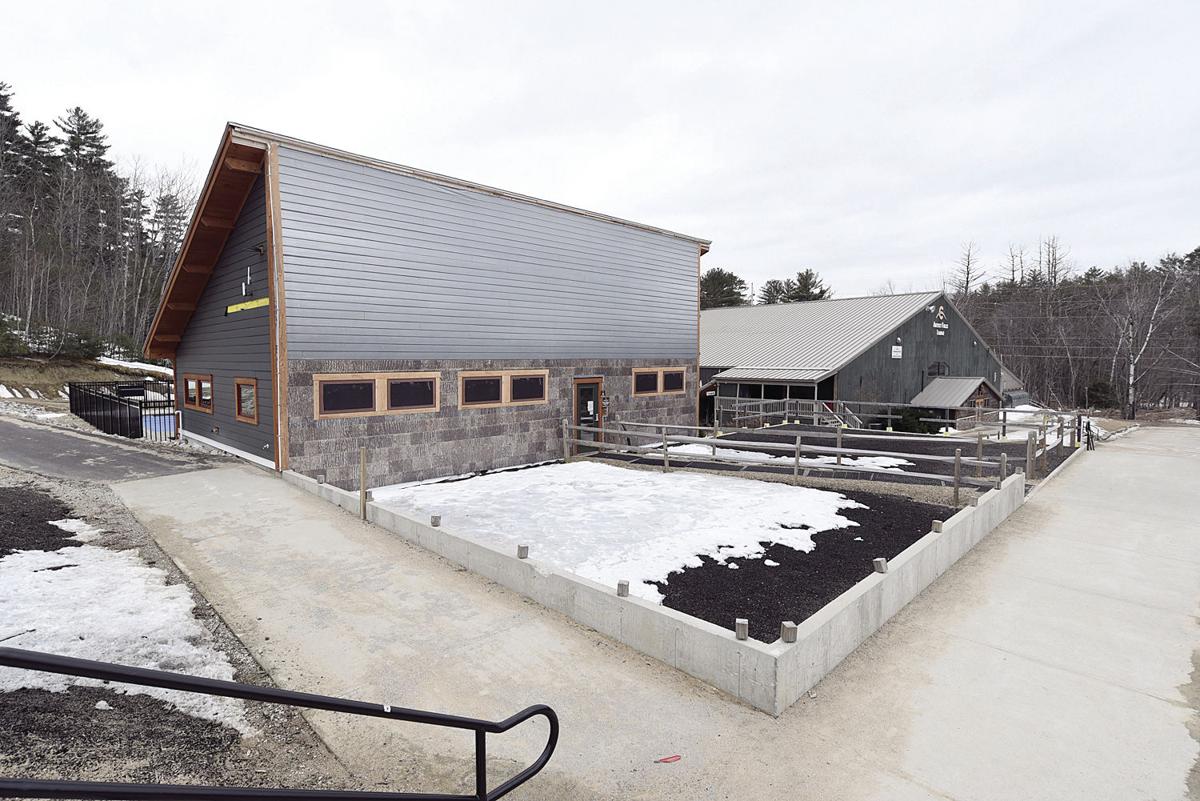 The Cranmore/Condominiums at Kearsarge Brooks amenities building's first phase (above) was constructed in 2017-18. The Conway Planning Board on March 12 agreed with HEB Engineers at its March 12 board meeting that a modification to the plan did not require site-plan review. (JAMIE GEMMITI PHOTO) 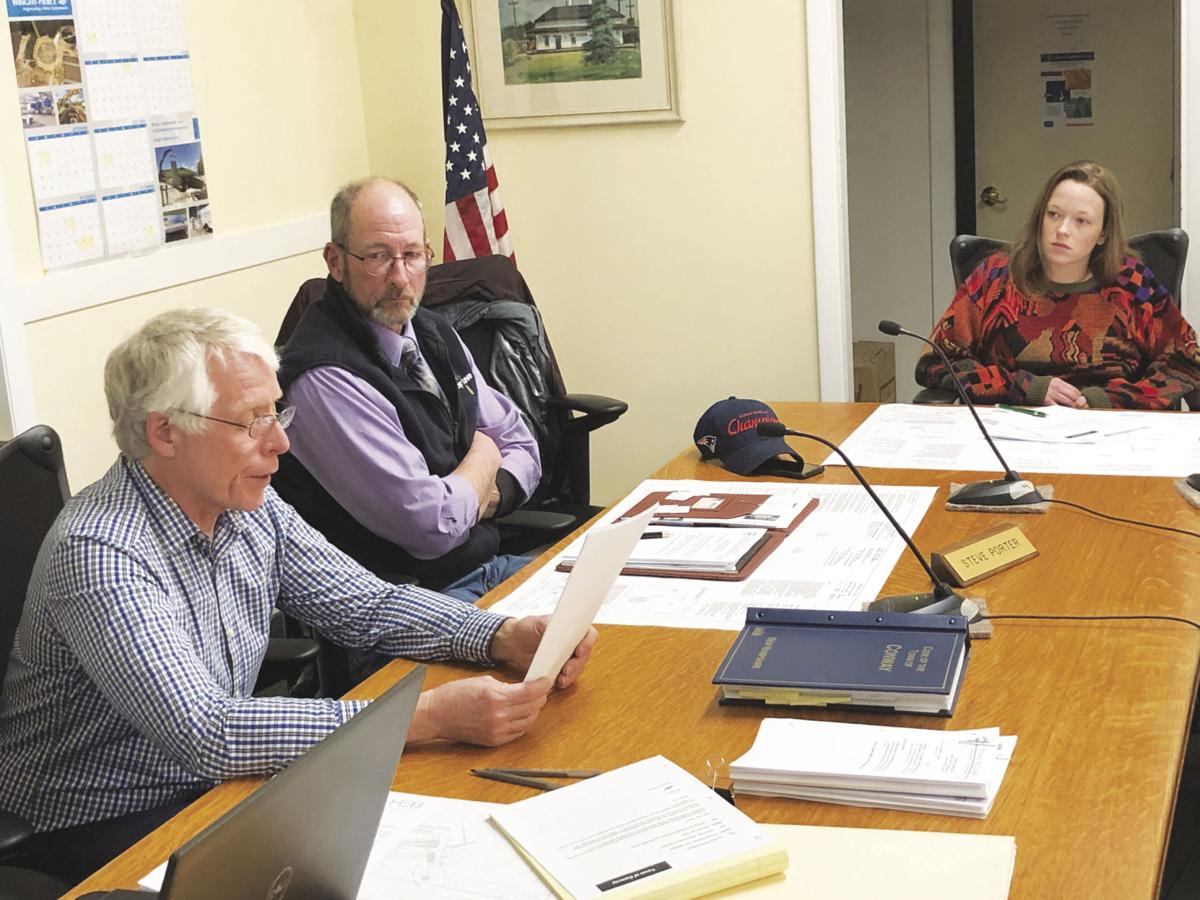 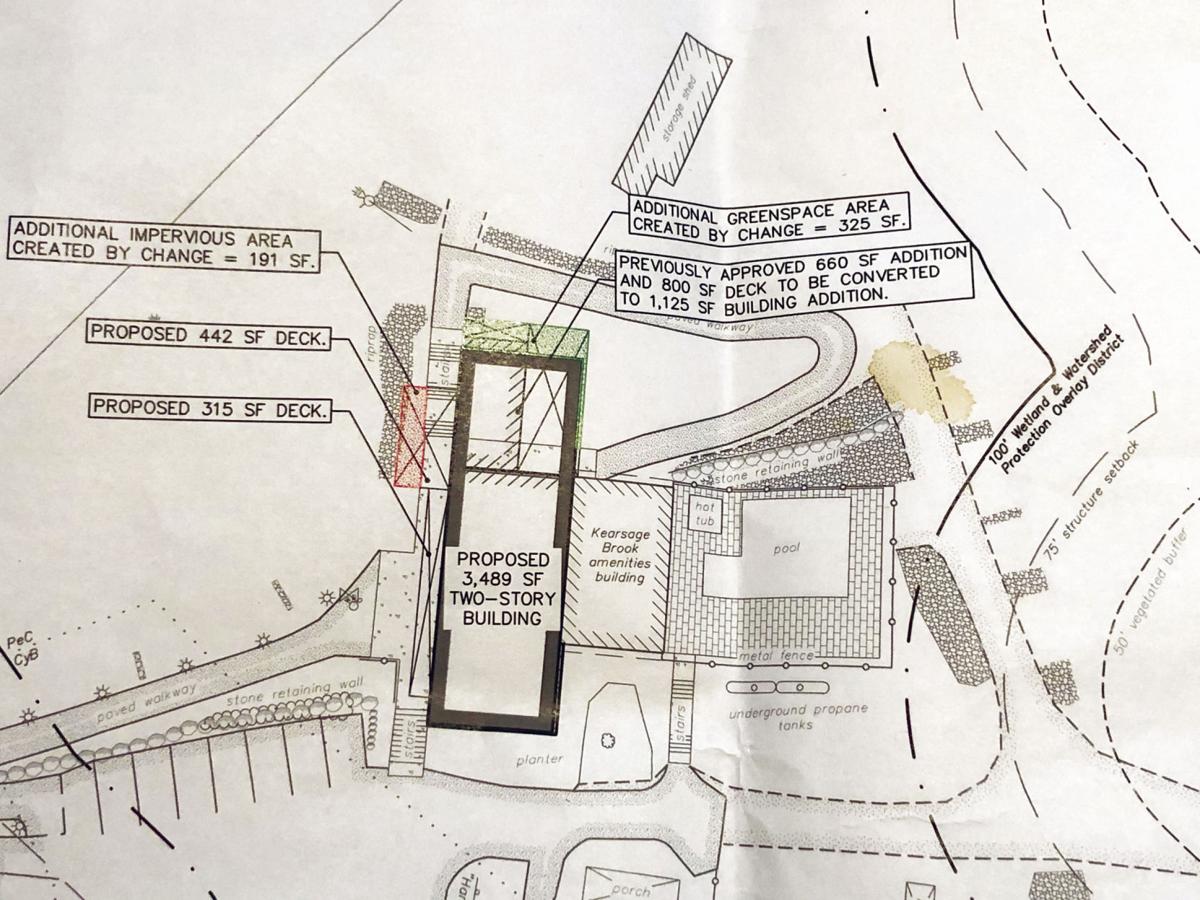 The revised plan for phase 2 of the amenities building for the Condominiums at Kearsarge Brook and ticketing area for the Cranmore tubing park. (HEB ENGINEERS)

The Cranmore/Condominiums at Kearsarge Brooks amenities building's first phase (above) was constructed in 2017-18. The Conway Planning Board on March 12 agreed with HEB Engineers at its March 12 board meeting that a modification to the plan did not require site-plan review. (JAMIE GEMMITI PHOTO)

The revised plan for phase 2 of the amenities building for the Condominiums at Kearsarge Brook and ticketing area for the Cranmore tubing park. (HEB ENGINEERS)

CONWAY — The Conway Planning Board March 12 unanimously approved a modification of an earlier plan for the amenities/pool building next to the now closed Cranmore Fitness Center.

Engineer Josh McAllister of HEB Engineers presented the modification to the board, explaining they wanted to modify the deck by enclosing it, creating a 3,489-square-foot, two-story addition with with 115 restaurant seats and 28 lounge seats at the site, located at 167 Skimobile Road at the base of the Tubing Park.

“We have been here for approval two times before,” said McAllister in explaining why he had returned a third time, this time to modify the already built structure’s design.

He said the purpose of the building is two-fold: first, to serve guests/owners of the Condominiums at Kearsarge Brook for pool and exercise equipment, and second, to serve as the ticketing and servicing of the tubing park and Mountain Adventure Center with a small service bar.

The proposed addition will be built to the east of the existing structure and pool.

“Originally the plan was for the whole back area to be a deck. ... Instead, we would like to modify that by enclosing the full deck area to provide indoor seating, and the part that was to have been the deck will now become green space,” McAllister told the board.

“We would like you to rule that this is an insignificant change to the original plan because we are changing the deck area primarily and increasing the green space area, and that those changes would not be considered significant and be subject to site-plan review,” said McAllister.

The numbers of restaurant seats and lounge seats, as well as plans for the snack bar remain the same.

He responded to a question by board member Ray Shakir by saying that the proposal was to reduce the building’s footprint by enclosing the deck area and adding to the green space.

“So, no deck,” explained McAllister.

According to the plans, the originallyapproved 660-squre-foot addition and 800-square-foot deck on the south end of the previously approved and built 2,403-square foot building would be converted to a 1,125-square foot addition with an additional 325-square foot of green space resulting in the change.

The originally approved plans called for a 660-squre-foot addition and an 800-square-foot deck on the south end of the previously built 2,403-square-foot building. Under the new plan, that addition and deck will be converted to a 1,125-square foot addition with an another 325 square feet of green space created by the change.

The vote was unanimous that the modifications did not require additional site-plan review.

The first phase of the building was constructed for the 2017-18 season by the now-closed Glen Builders Co. with Cranmore completing the project in-house when that contractor closed in March 2018.

Interviewed this week, Cranmore General Manager and President Ben Wilcox, said that the building will replace the role that the snack bar at the Cranmore Fitness Center currently serves. He said the facility currently consists of an outdoor pool with a men’s and women’s locker room and a viewing area for the pool. Phase 2 will consist of an amenities building with the tubing ticket area and bathrooms with a small fitness room for Kearsarge Brook. The second floor will consist of a snack bar and seating area for tubing and Adventure Park guests.

Cranmore is scheduled to go with applicant LaFrance Hospitality Associates before the planning board April 9 to begin site-plan review for a four-story, 90-room hotel on the site of the Cranmore Fitness Center.

“Once that site-plan review is obtained, we would set in motion the construction schedule for razing the fitness center and building the hotel,” said Wilcox Monday.

In other action at the March 12 meeting, the board voted 4-0-1 (with Shakir abstaining) to give selectmen their approval to sell the Conway Community Building property in Center Conway should they decide to do so.

Shakir raised questions about the need to return to the property to tax rolls and questioned the revenue options for the site but Porter, selectmen’s representative, said the building is not producing any tax revenue under current circumstances and that the vote was purely a matter of giving selectmen the right to sell should they decide to do so.

He lobbied for tabling discussion until more information was gathered, citing recent discussions before the board of selectmen to possibly lease or sell parts of the property to an indoor tennis group.

Porter and Irving explained that time was of the essence as selectmen needed a vote by the planning board to allow them to meet the warrant deadline for annual town meeting April 14.

In closing, the board adjusted its meeting schedule in light of concerns of social distancing brought on by the coronavirus. It undertook the option knowing that that by eliminating some meetings, it would no doubt extend the length of meetings that are held by increasing the number of items that the board would address.

After discussion about the pros and cons, the board unanimously voted to cancel the board’s scheduled meetings for April 23, May 28 and June 25. The board's planned March 26 meeting was canceled this week.

The board is next to meet May 14, but Irivng said this week that since the governor has issued an executive order relaxing the N.H. RSA RSA 91-A requirements that make virtual meetings problematic, "The chair might call for a meeting in the interim, which might be virtual. I will let you know."

The agenda for the now canceled March 26 meeting was to include:

• Evergreens on the Saco Owners Association: application to amend existing unit subdivision approval to change units 48 and 49 from a duplex to single units; to relocate unit 52; and to combine single units 44 and 45 into a duplex structure on Poliquin Drive.

• A public hearing (not subject to town meeting) on the definition of a driveway; amendment to subdivision regulation that would facilitate “driveways to parking areas shared by unit subdivisions that accommodate duplex and single-family dwellings.”