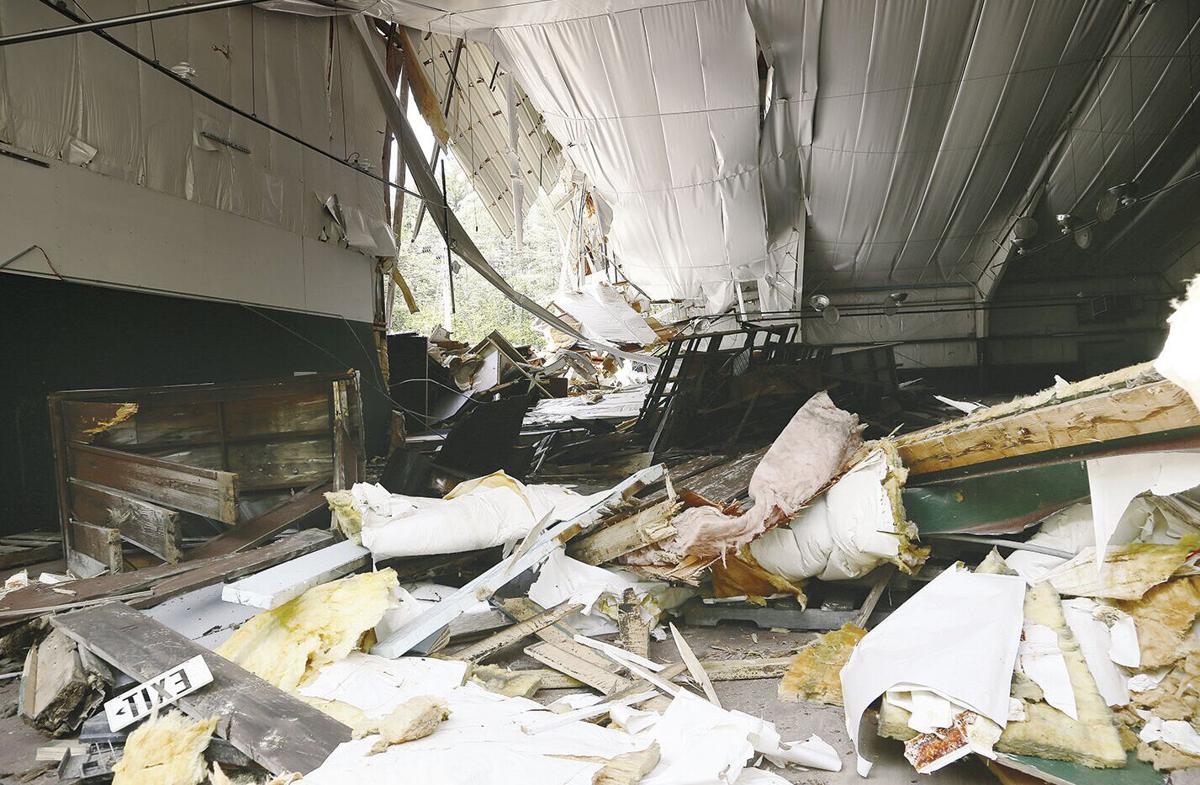 Kidder Building & Wrecking Inc is heading up the demolition of Artist Falls Lodge at Cranmore, which will be continuing for the next few weeks. (RACHEL SHARPLES PHOTO) 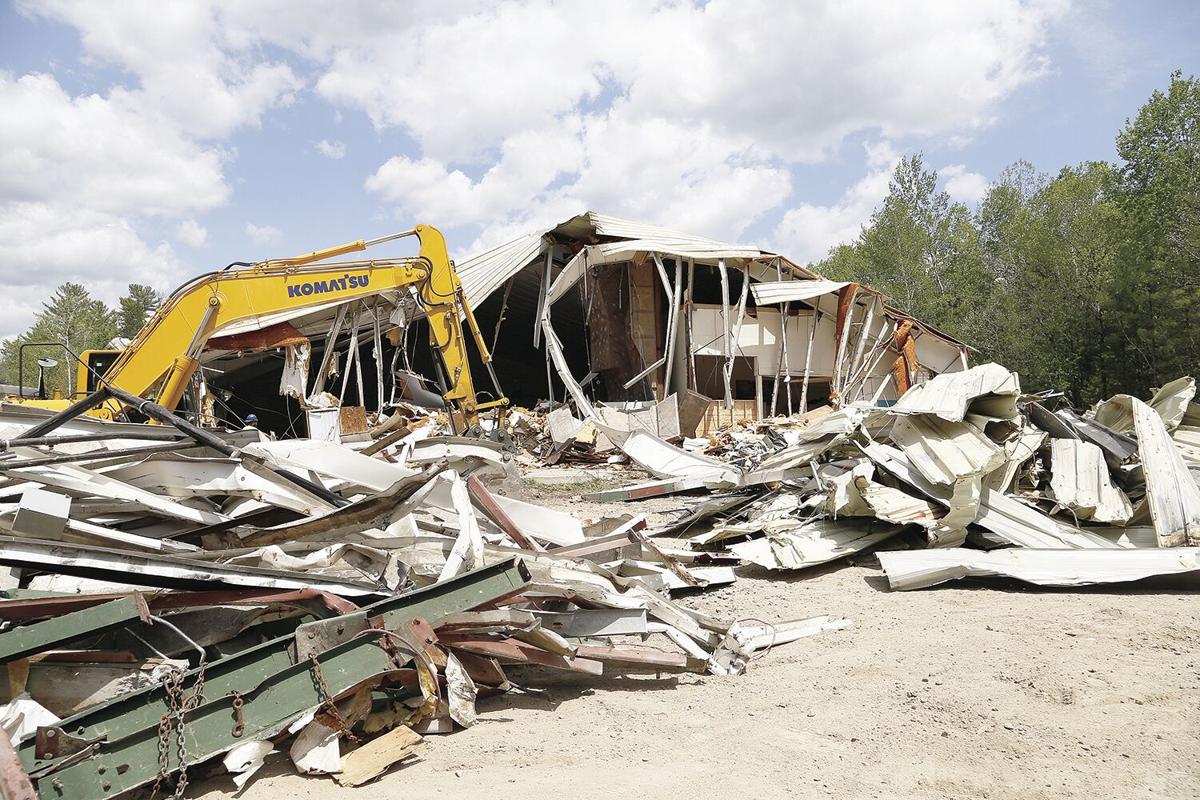 An excavator sits by piles of scrap metal as demolition began on the back of the Artist Falls Lodge at the Cranmore Mountain Resort Tuesday. (RACHEL SHARPLES PHOTO) 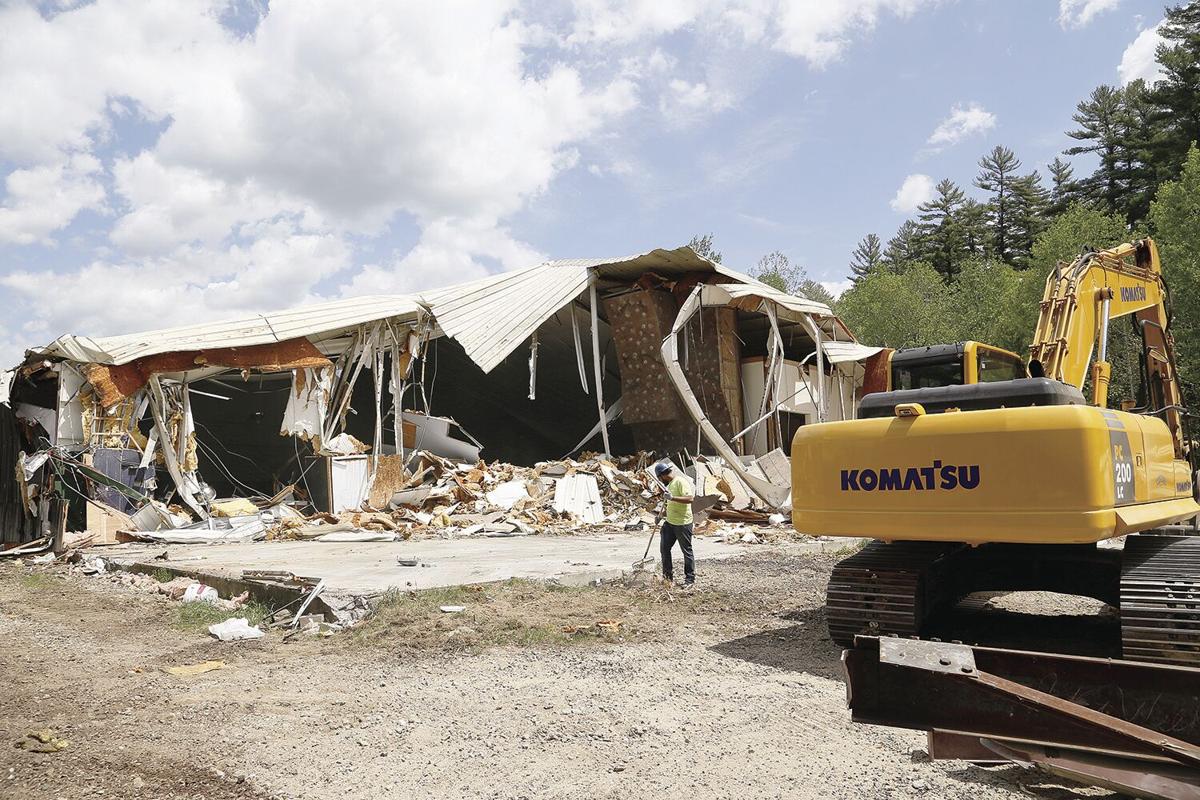 A worker cleans up some of the piles of debris by the excavator as demolition began on the back of the Artist Falls Lodge at the Cranmore Mountain Resort Tuesday. The general contractor for the project is the Opechee Construction Company in Belmont, and Kidder Building & Wrecking Inc is heading up the demo part of the project, which will be continuing for the next few weeks. (RACHEL SHARPLES PHOTO) 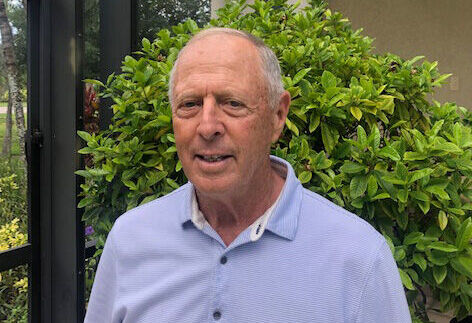 An elevation showing a side view of the proposed hotel at Cranmore Mountain Resort. (COURTESY OPECHEE CONSTRUCTION)

Kidder Building & Wrecking Inc is heading up the demolition of Artist Falls Lodge at Cranmore, which will be continuing for the next few weeks. (RACHEL SHARPLES PHOTO)

An excavator sits by piles of scrap metal as demolition began on the back of the Artist Falls Lodge at the Cranmore Mountain Resort Tuesday. (RACHEL SHARPLES PHOTO)

A worker cleans up some of the piles of debris by the excavator as demolition began on the back of the Artist Falls Lodge at the Cranmore Mountain Resort Tuesday. The general contractor for the project is the Opechee Construction Company in Belmont, and Kidder Building & Wrecking Inc is heading up the demo part of the project, which will be continuing for the next few weeks. (RACHEL SHARPLES PHOTO)

An elevation showing a side view of the proposed hotel at Cranmore Mountain Resort. (COURTESY OPECHEE CONSTRUCTION)

Opechee Construction of Belmont began taking down the building Tuesday, working from the back to the front, according to Cranmore Mountain Resort Marketing Director Becca Deschenes.

Two tennis courts were rented since that time by a local tennis group that is currently seeking other alternatives. It was also used by Cranmore for its tubing park ticket sales and food beverage this past winter, according to Deschenes.

It was originally an indoor tennis facility built and owned by the late Howard S. Hatch. The outdoor stadium hosted the Volvo International Tennis Tournament from 1975-84, and greats such as Jimmy Connors played there. The tournament moved to a hard court surface in Stratton, Vt. in 1985 and eventually to New Haven, Conn.

Cranmore’s outdoor clay courts were demolished in 2010 to accommodate the tubing park.

In terms of the new hotel, under local zoning regulations, the applicant must set aside 2 acres of land for each guest room planned, and Cranmore has dedicated 184 acres of its 814 acres to satisfy that requirement.

At the time of the project receiving its approval from the planning board in November 2019, the hotel’s footprint was revealed to be smaller than that of the 55,000-square-foot former fitness center.

When the hotel project was first announced in 2019, Cranmore President and General Manager Wilcox said, “Resort hotels are very common at ski resorts in New Hampshire and across the country. Adding a resort hotel at Cranmore would be a natural fit and would round out the resort’s offerings.”

Lafrance Hospitality Group closed on the sale of the property last week, she said.

Richard Lafrance, CEO of Lafrance Hospitality Associates, told the Sun he is eagerly looking forward to opening the new hotel and said it will complement Cranmore’s year-round activities, both as a ski resort in winter and its summer amenities.

Those amenities include downhill mountain biking (both beginner and intermediate). The site is also located at the start of the planned MWV Recreation Path that will extend south alongside Puddin Pond and the North-South Road to Hemlock Lane and beyond, if all goes according to plan.

Lafrance added that he expects the Residence Inn in North Conway will lead to referrals between the two hotels.

“We’re going full steam ahead. We hope to open the hotel next mid-summer, July 1, probably a 14-month project,” said Lafrance.

He noted that as is the case in all industries these days, there is a worker shortage as well as a challenge in terms of quantity and pricing of building materials.

“But we’re optimistic,” he said.

Noting that he learned to ski at Cranmore as a boy and that his children, grandchildren and now great-grandson have all learned to ski there, Lafrance is bullish on the area.

He said he once owned as a vacation house the Kearsarge home of late local ski shop founders Kay and Carroll Reed. In fact, his appreciation for North Conway as a near year-round destination resort led his family-owned company to purchase the Marriott in 2016.

In addition to the obvious recreational amenities, Lafrance said his company will be seeking to collaborate on weddings at all times of the year and hosting corporate business meetings, including in slower season.

“We hope to attract some off-season, small business retreats. We will be isolated a bit, so we think that’s going to have some some effect and potentially, you know, we can be a wedding destination both from the mountain standpoint and the hotel to put it all in one area,” Lafrance said.

He confirmed that the hotel will not have a restaurant other than guest-related hot breakfast service.

For other dining options, “we are hoping that Cranmore can extend as planned its food service operation a little bit more (as part of its base area redevelopment),” said Lafrance.

He said the hotel will feature a fitness center for guests, outdoor seating with firepits and an indoor pool. He added that there will potentially be some reciprocal use of the existing Condominiums at Kearsarge Brook outdoor pool located near the base of the adjacent Cranmore tubing park.

“That is to be worked out with the Fairbank Group,” said Lafrance, referring to Brian and Tyler Fairbank, owners of Cranmore, which they bought in 2010 with Joseph O’Donnell and who have since overseen its redevelopment.

Cranmore earlier this month unveiled its Phase III of that redevelopment, which will include a new Fairbank Lodge with day ski services as well as 15 new units at Condominiums at Kearsarge Brook. Pending approvals, Cranmore hopes to break ground on that phase in spring 2022.

“The Fairbank Lodge is the next chapter of improvements that will continue to make Cranmore a progressive and leading year-round resort in New England,” said and Wilcox, adding, “Mixing condominiums with new ski facilities is a proven model in the ski industry.”

Lafrance said his company also operates the Fairfield Inn & Suites by Marriott in Plymouth and Tru by Hilton in Manchester.

“We have a lot of synergy in New Hampshire, where we can cross-promote our hotels,” he said.

The company owns five independent restaurants in southern New England and 17 hotels, with another to open in June in Mansfield, Mass. It is a Fairfield Inn “that is almost identical to the Cranmore hotel that we will be building,” said Lafrance.

Besides the Fairfield Inn at Cranmore, several other hotel projects in the works include: the 69-room Presidential Wing upgrade to the Omni Mount Washington Resort; the $3.5 million renovation of the White Mountain Hotel & Resort in Hale’s Location, set to reopen Memorial Day Weekend; the four-story, 80-room Home2Suites by Hilton in North Conway, set to open in July; a three-story, 114-room hotel envirioned for the site of the former Junge’s Motel; and a yet-to-be approved 105-room, four-story Viewpoint Hotel at the site of the closed Intervale Motel. That project is set to return to the Conway Planning Board in August.

For more information about Cranmore Mountain Resort, go to cranmore.com. For more on Lafrance Hospitality, go to lafrancehospitality.com.