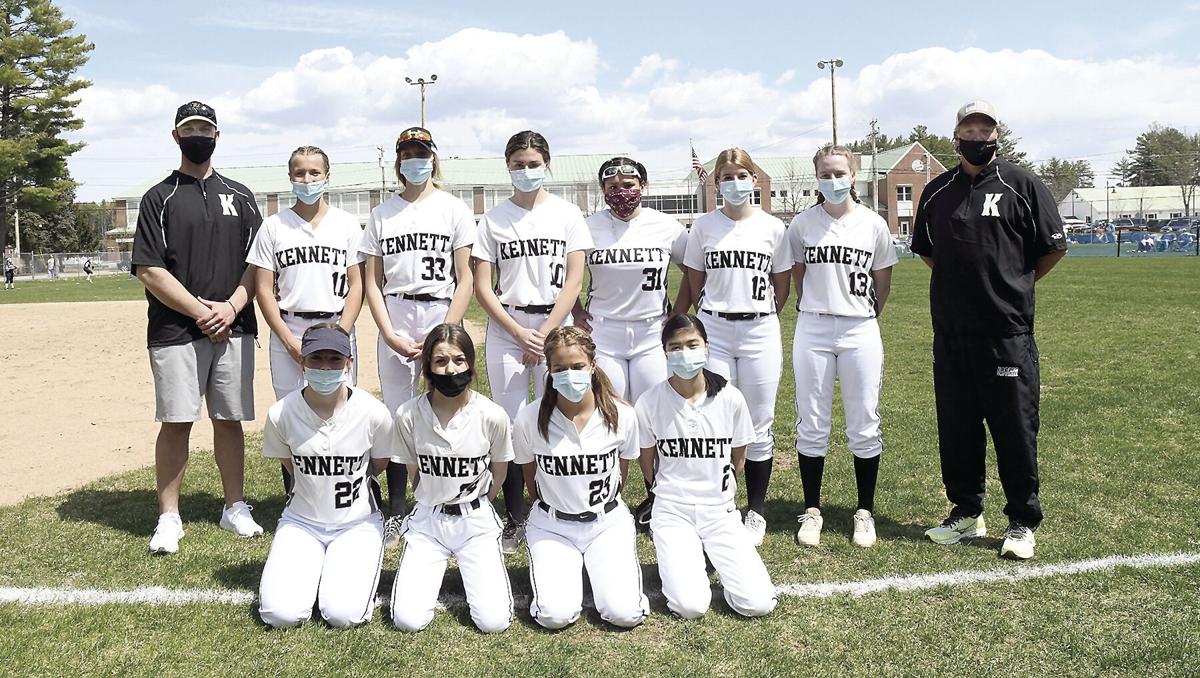 It took more than 600 days, but the Kennett High softball team finally returned to the diamond when the Eagles played Stateline neighbors Fryeburg Academy in Fryeburg, Maine, on Saturday. (LLOYD JONES PHOTO) 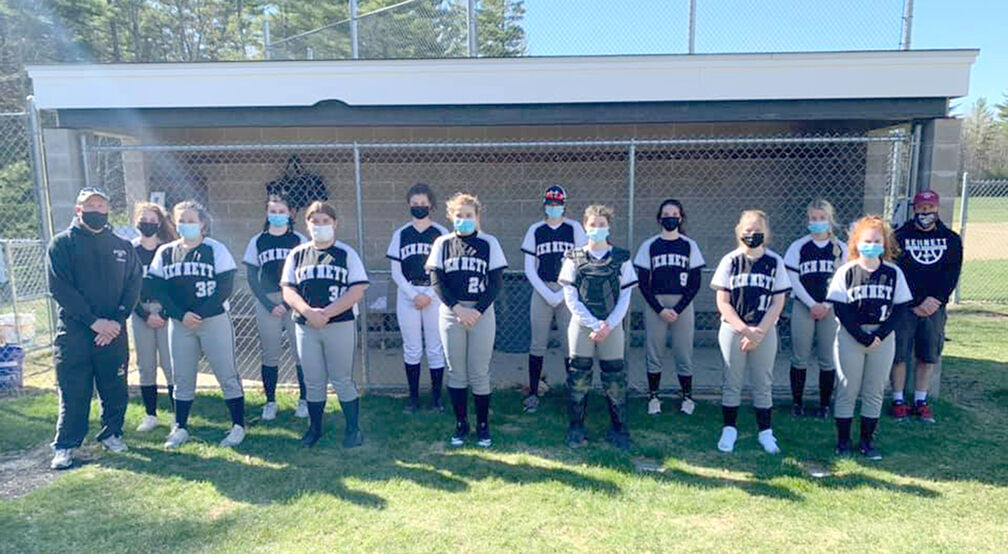 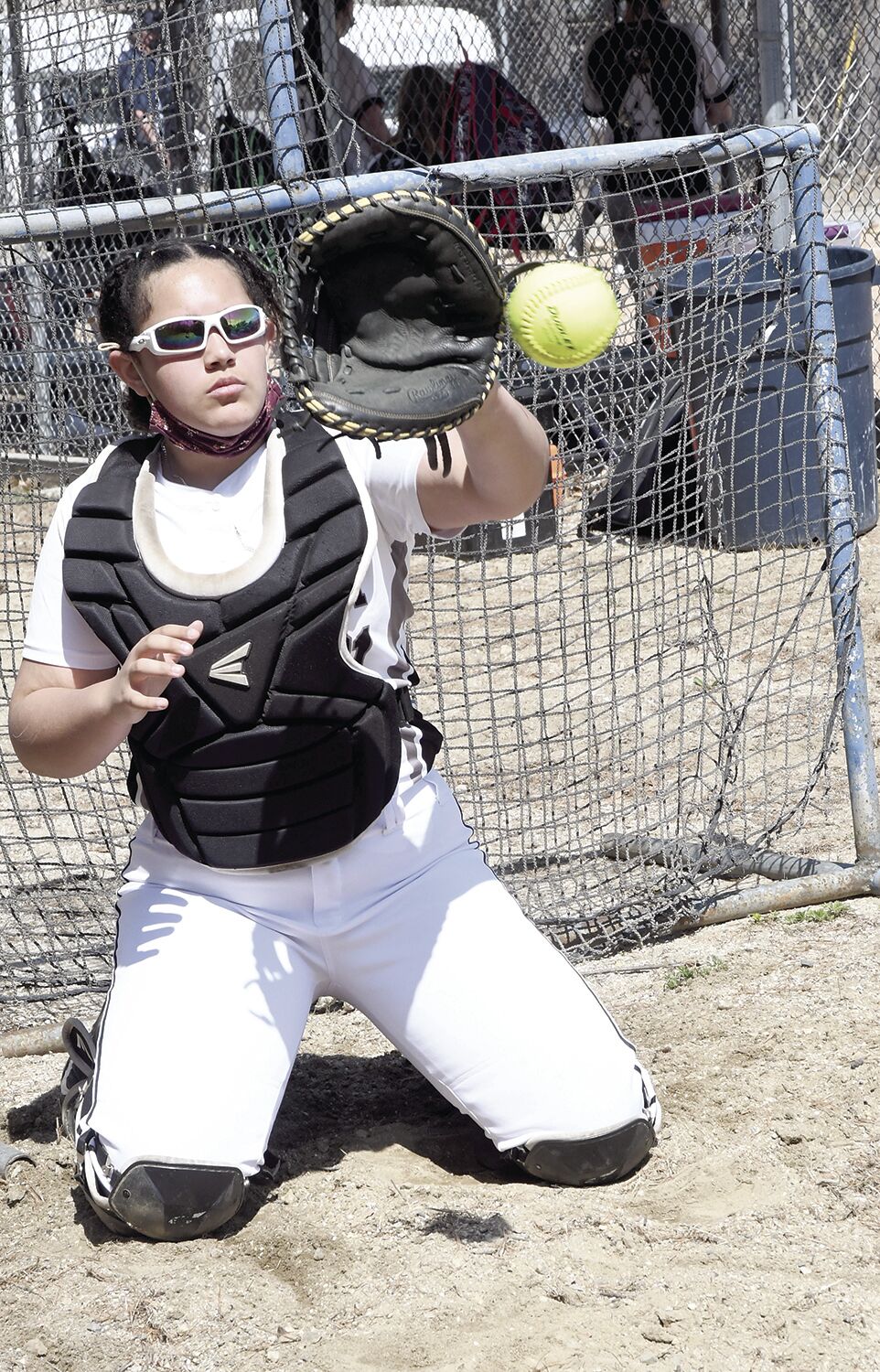 It took more than 600 days, but the Kennett High softball team finally returned to the diamond when the Eagles played Stateline neighbors Fryeburg Academy in Fryeburg, Maine, on Saturday. (LLOYD JONES PHOTO)

CONWAY — If it seems like it’s been a long time since the Kennett High softball team has been in action, you’re right. Coach Chris Kroski took over the program two years ago and had to wait more than 675 days to coach his first game due to the COVID-19 pandemic.

The Eagles were the last spring team at KHS to open their season, hosting Prospect Mountain on Tuesday. The hometown flock fell 4-0 to the visiting Timberwolves.

“It’s been a while,” joked Kroski, adding, “I think we’re all grateful that we can play this season. This was the first game in a couple of years. We’re a little rusty but we’ll get there.

There are 31 girls out for the sport this spring with 16 on varsity and 15 on the JV roster. Twenty-two of the girls in the program are either sophomores or freshmen.

Kroski, a master patrol officer for the Conway Police Department, knows the game well. He was drafted by the Seattle Mariners as a catcher/first baseman and spent from 2002-09 in the Seattle and Cincinnati Reds organization reaching Triple-A, where he tore his ACL. He coached the varsity baseball team for Stateline neighbor Fryeburg Academy from 2016-19 before taking over the Kennett softball team.

Kroski succeeds Peter Ames, who retired after the 2019 season. He coached varsity softball for 33 years, compiling a record of 456-222, while winning four state championships and finishing as runners up twice.

“I’m excited for the season to finally happen,” Kroski said. “We’ve got some talent and great numbers in our underclassmen.”

Higgins is the team’s primary pitcher, while Keeler and Chick also will see mound duties for the varsity and JV.

Hussey and Glengross are the primary catchers and the two freshmen are solid behind the plate. Glencross can also play first base, which will be primarily occupied by Krebs. Caroline Coleman, the lone varsity member from 2019, will be at second base with Kenny at shortstop and Glaze at third. Caputo can play a variety of infield positions.

Elias will patrol centerfield while Chick, Violette, Georgia Coleman and Doherty will be in the outfield mix.

Arnold has been sidelined due to injury but hopes to be cleared to return next week.

Kroski said speed is one of this team’s best attributes.

“Emily Kenny, Caroline Coleman and Marissa Caputo are lightning in a bottle,” he said. “I like to make things happen when we can, We’re going to run, bunt, whatever we need to do to manufacture runs.”

The New Hampshire Interscholastic Athletic Association canceled all spring sports in 2020 due to the coronavirus. Kennett’s sports teams met virtually through that spring with Kroski working with his players on skills and drills. The Eagles even held spring sports awards with Kroski selecting senior Jessica Noyes to receive the Softball Award.

Kroski was able to finally see some of his players in person last summer thanks to the MWV Eagles summer softball team, which Caputo started in 2018, and there was so much interest in 2020 that two teams (U14 and U16) were formed and played several games including a couple of tournaments.

Preseason this spring saw some more hiccups due to the coronavirus. The school went remote for a week, shutting down all athletics over that stint which results in missing out on two games with Winnisquam. Once cleared to return, KHS learned that Gilford, which was to play a home-and-home series, had to cancel due to its outbreak of the virus.

The hometown flock did make the trek over to Stateline neighbor Fryeburg Academy for an exhibition game last Saturday. The varsity fell 16-2 to a veteran Raiders team, while JV squad lost in extra innings 7-6.

The Eagles faced a strong Prospect Mountain team (3-1 in Division III) on Tuesday and were limited to just one hit.

“We struggled hitting,” Kroski said. “You can’t beat anyone if you don’t score a run.”

He added: “We’ll be in the cage (Wednesday), and we’ll crank it up. For a lot of these sophomores and freshmen the last time they saw pitching it was coming in at 35 to 40 mph. They’re not used to seeing 50-60 mph, but they’ll get there. We’re only going to get better.”

Kroski said the Eagles were solid defensively and got a nice performance on the mound from Higgins, who struck out four while walking just one Timberwolves batter.

The NHIAA had an open tournament last fall and winter for multiple sports with everyone making the playoffs and initially playing in a regionalized cluster in the opening rounds of post-season play. A similar format will be followed this spring.

Kennett is scheduled to travel to rival Kingswood on Monday (4 p.m.) in the first of a home-and-home series, which is slated to culminate in Conway on Wednesday at 4 p.m.