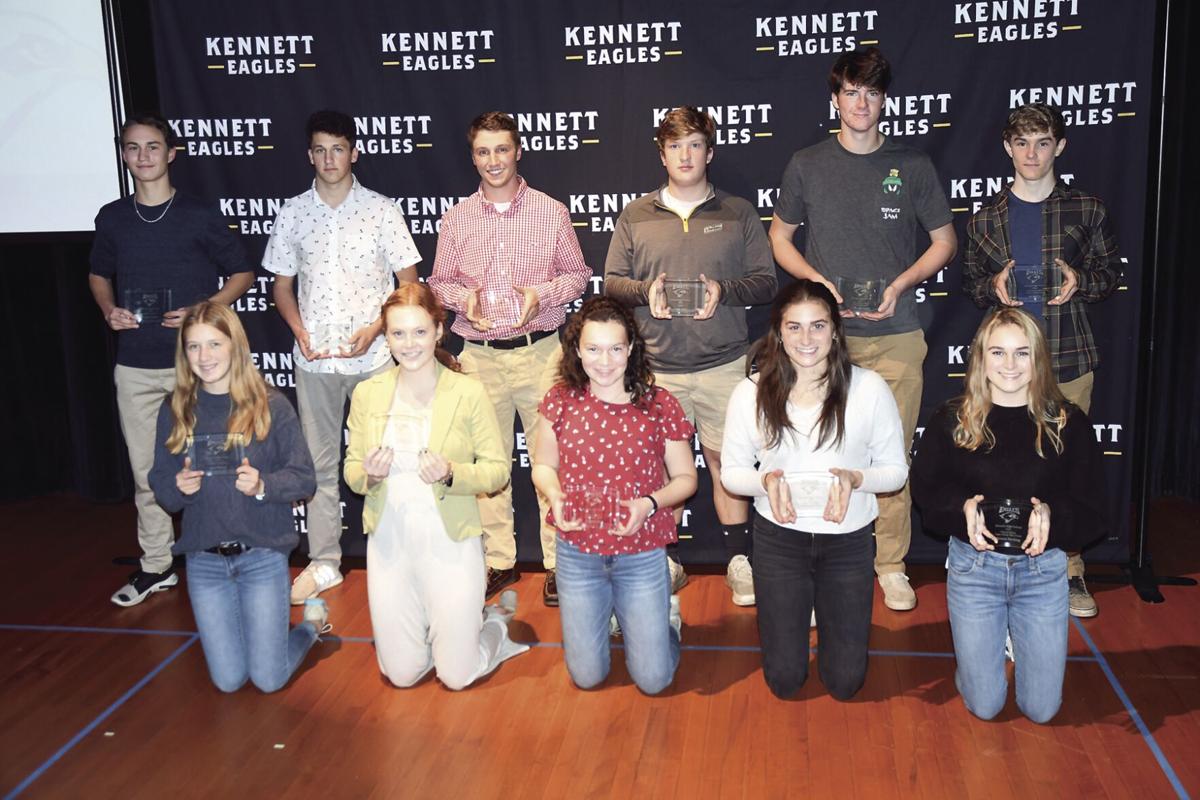 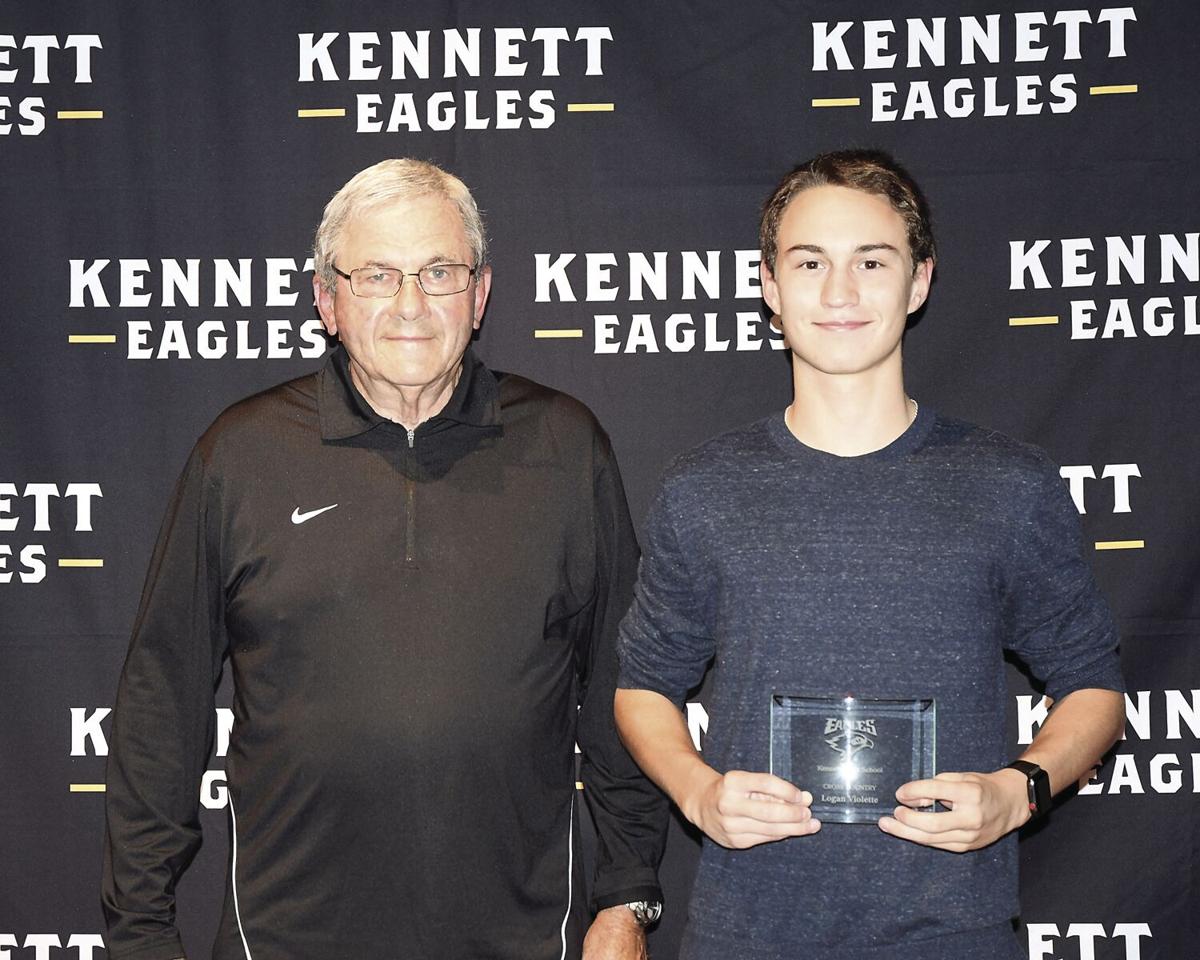 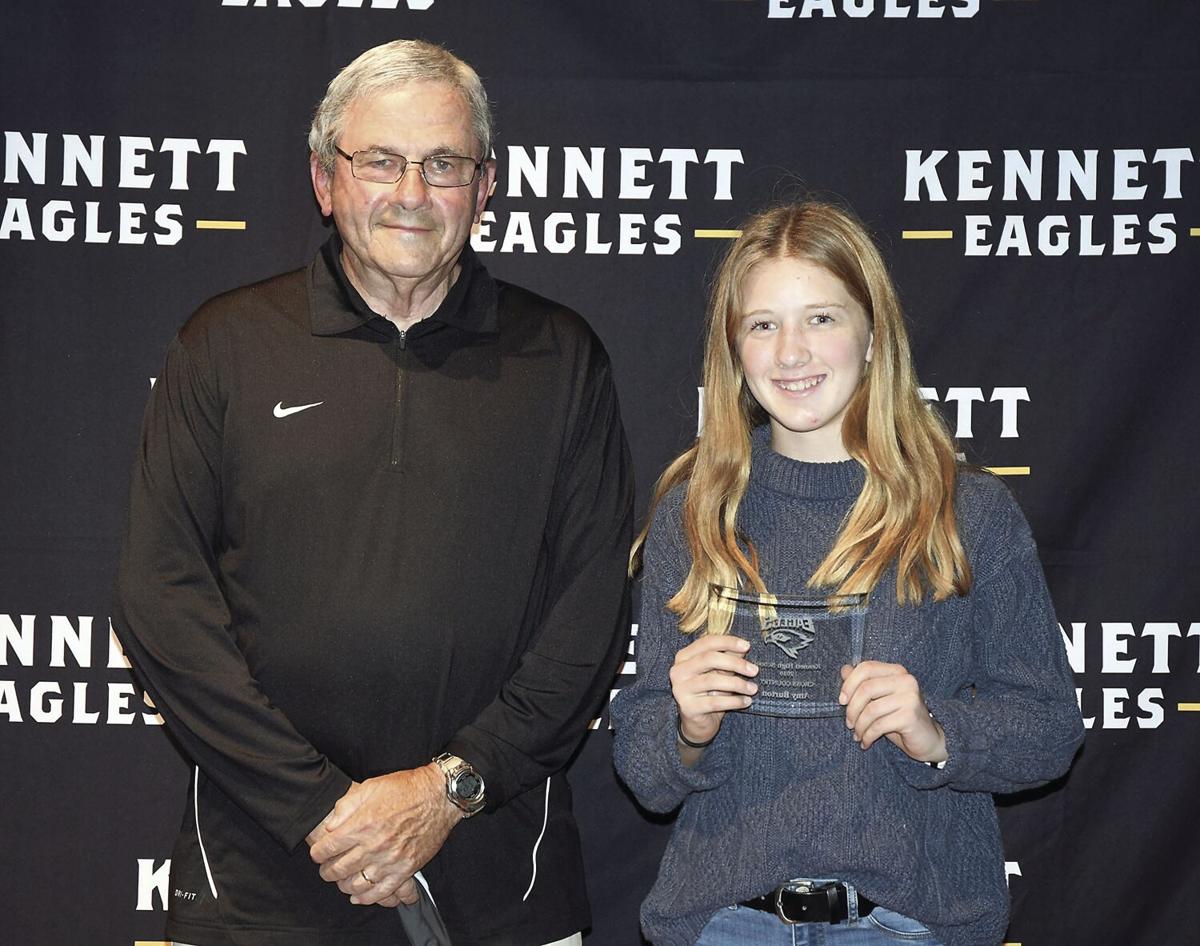 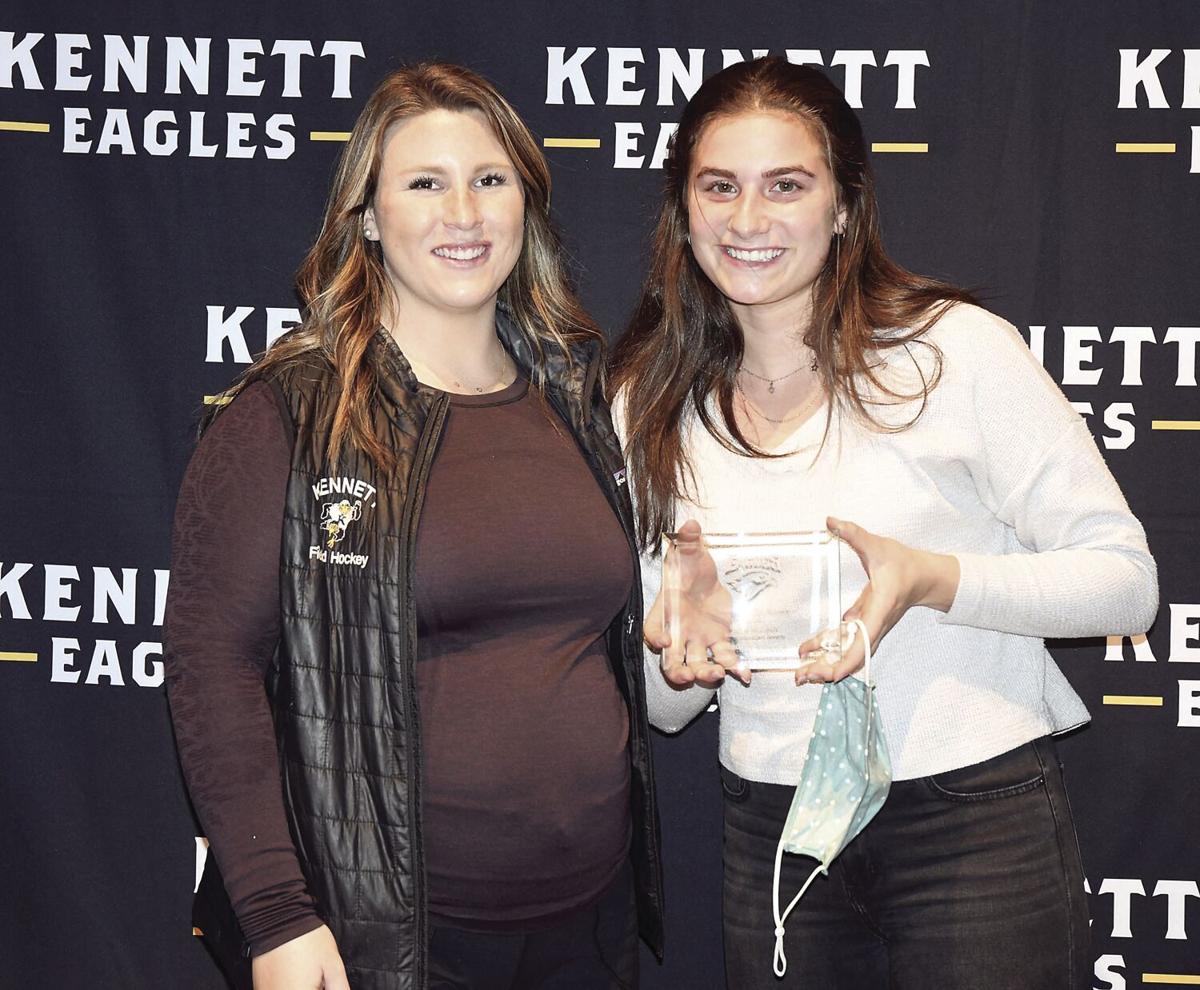 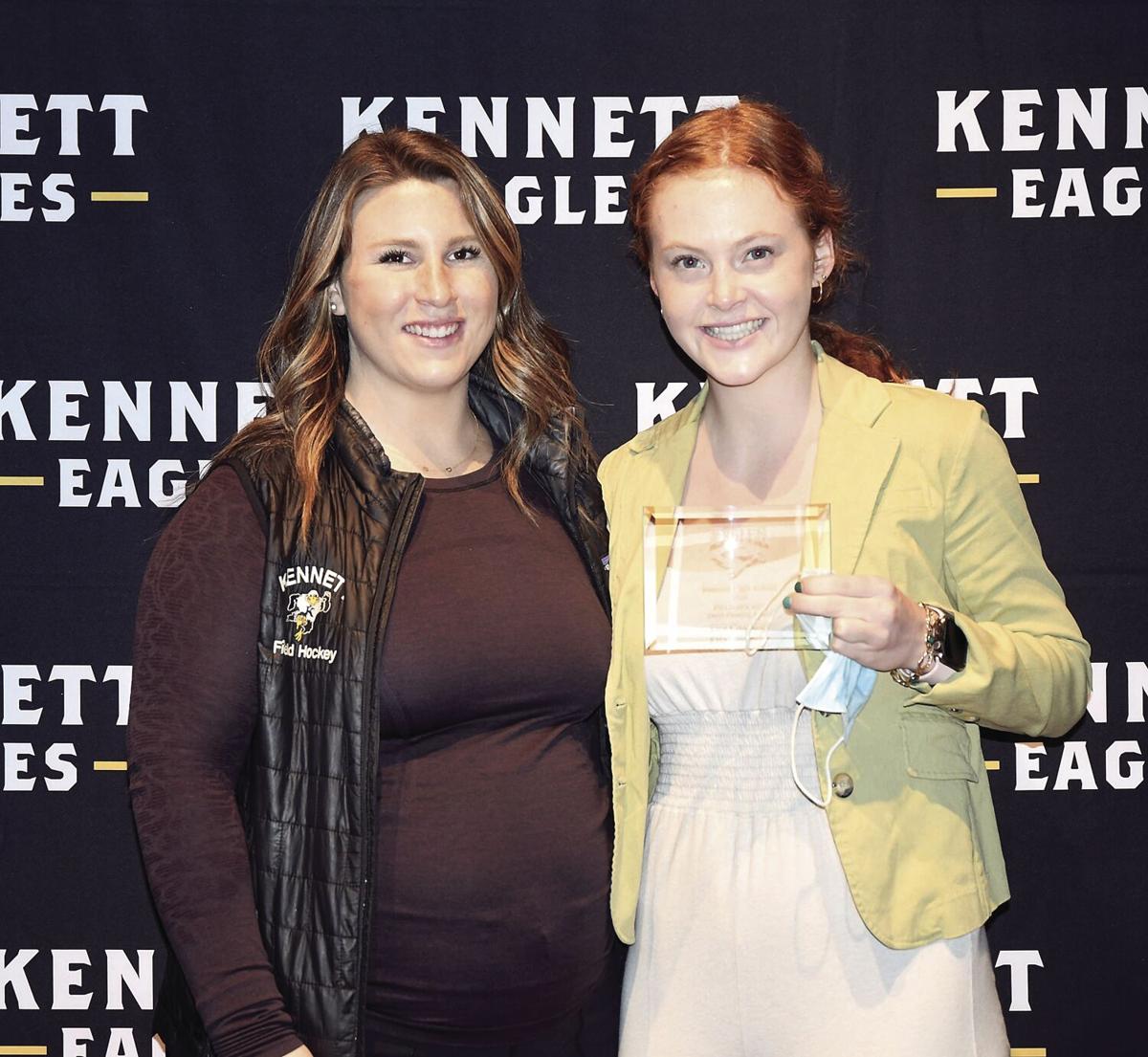 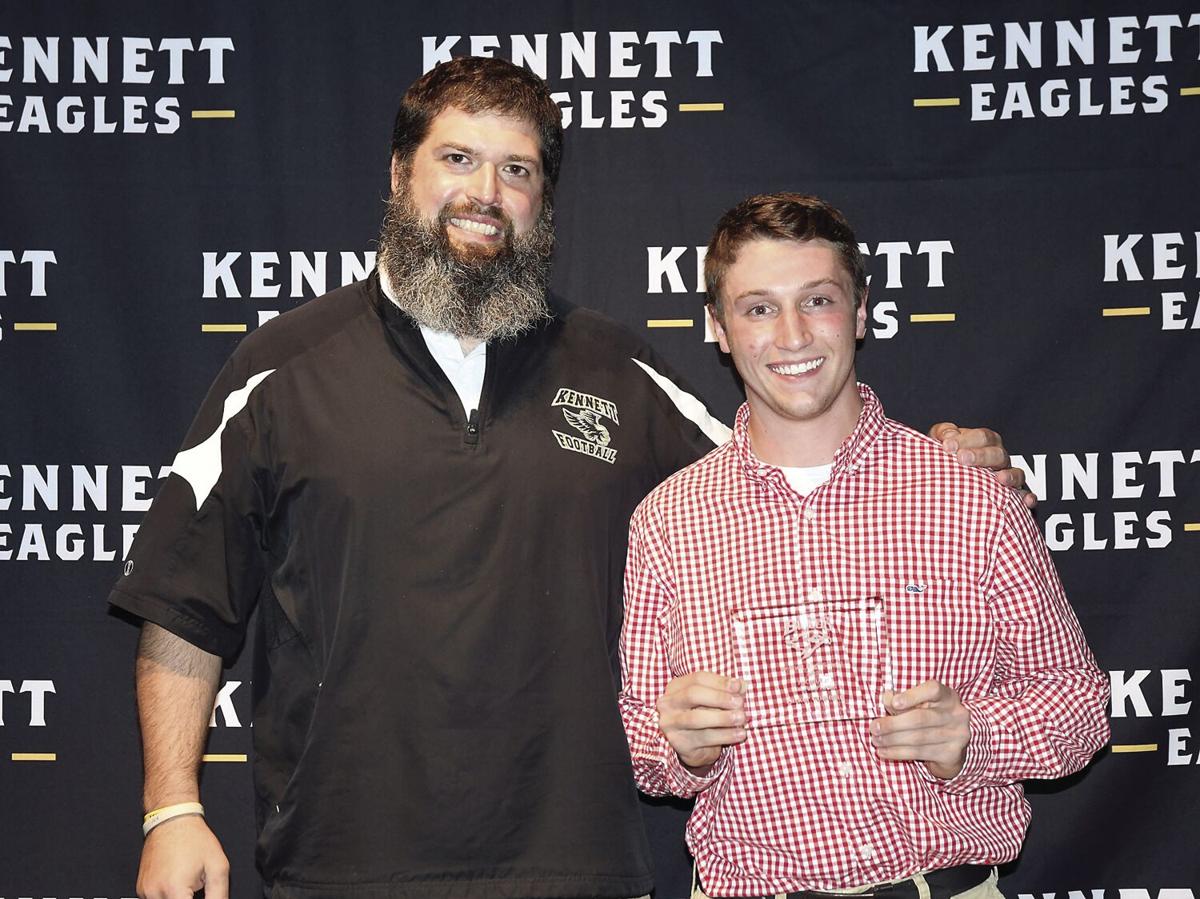 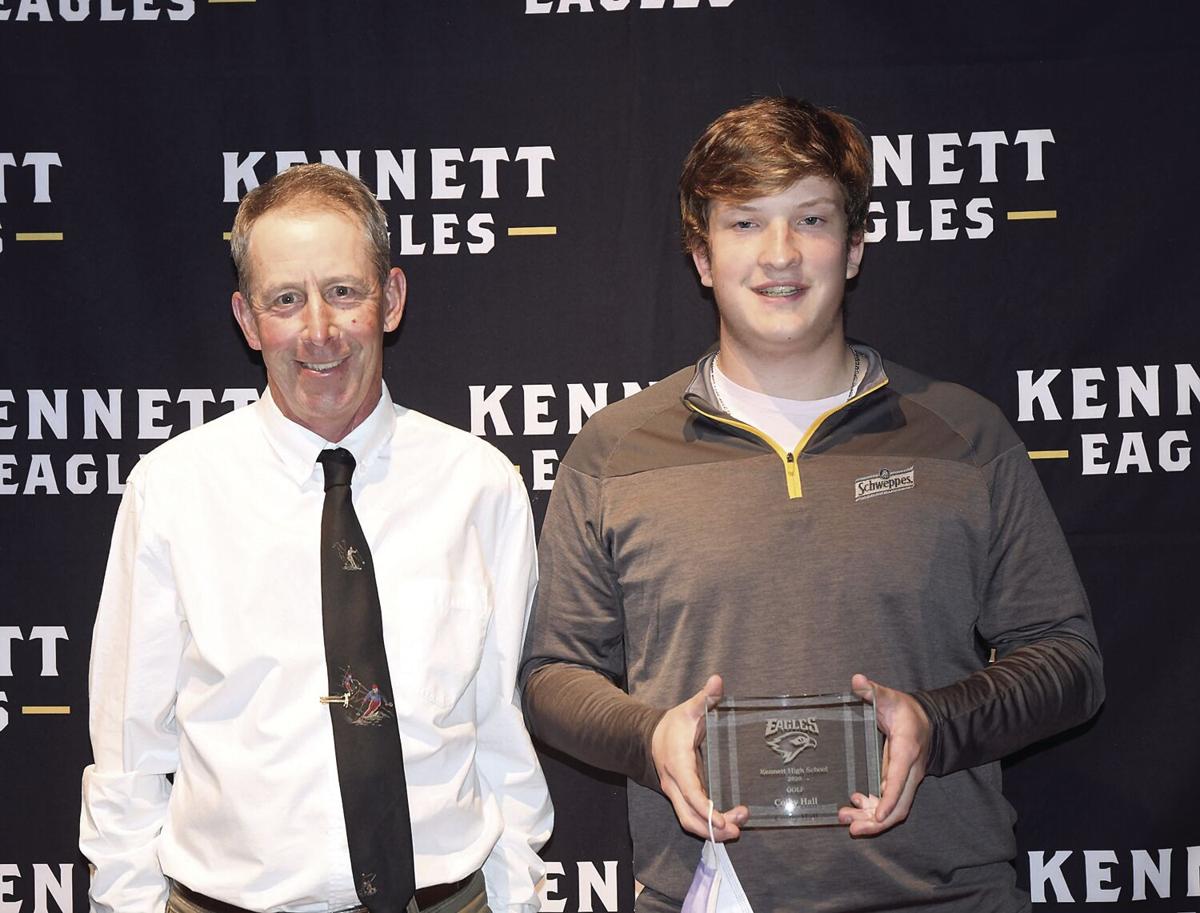 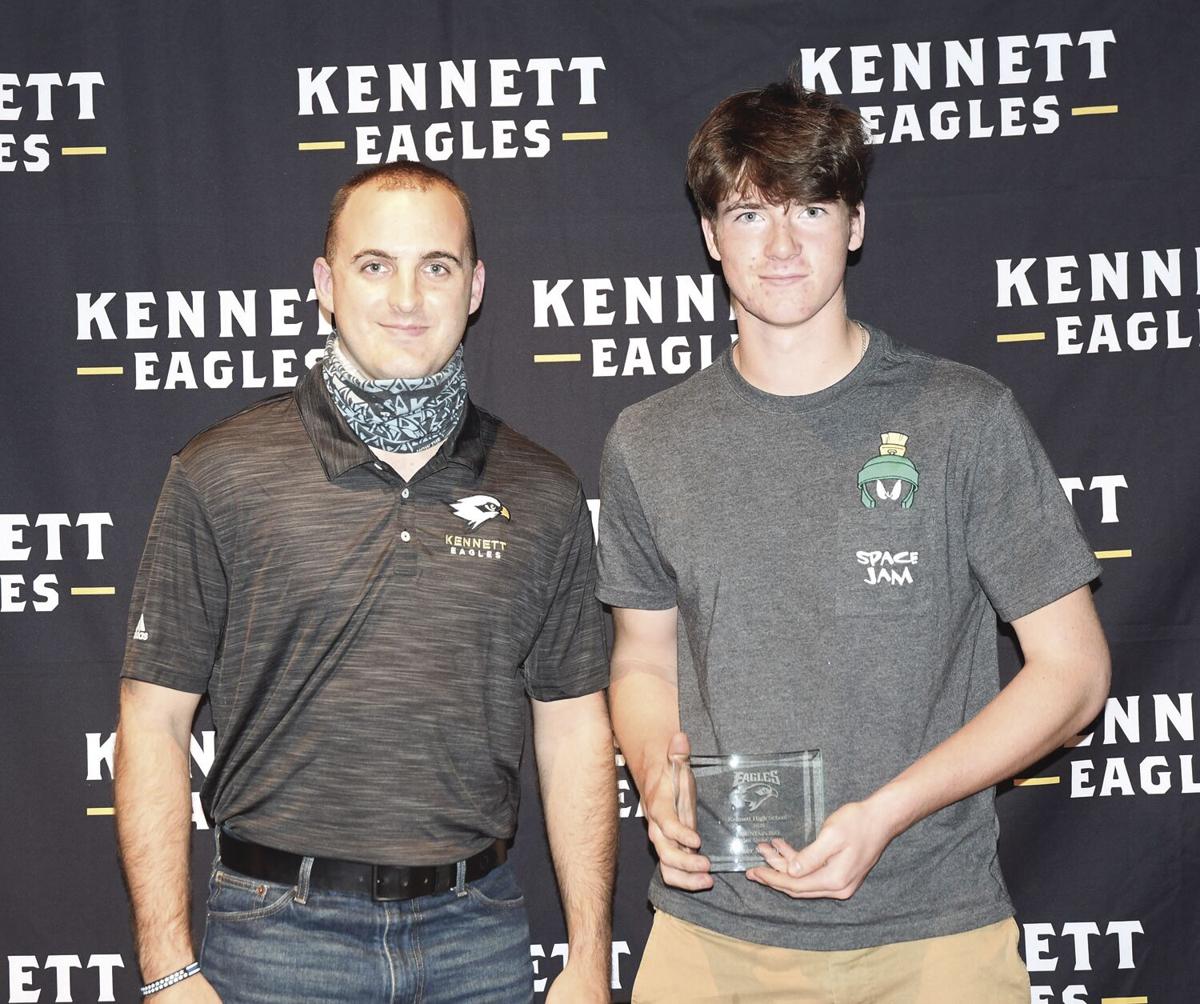 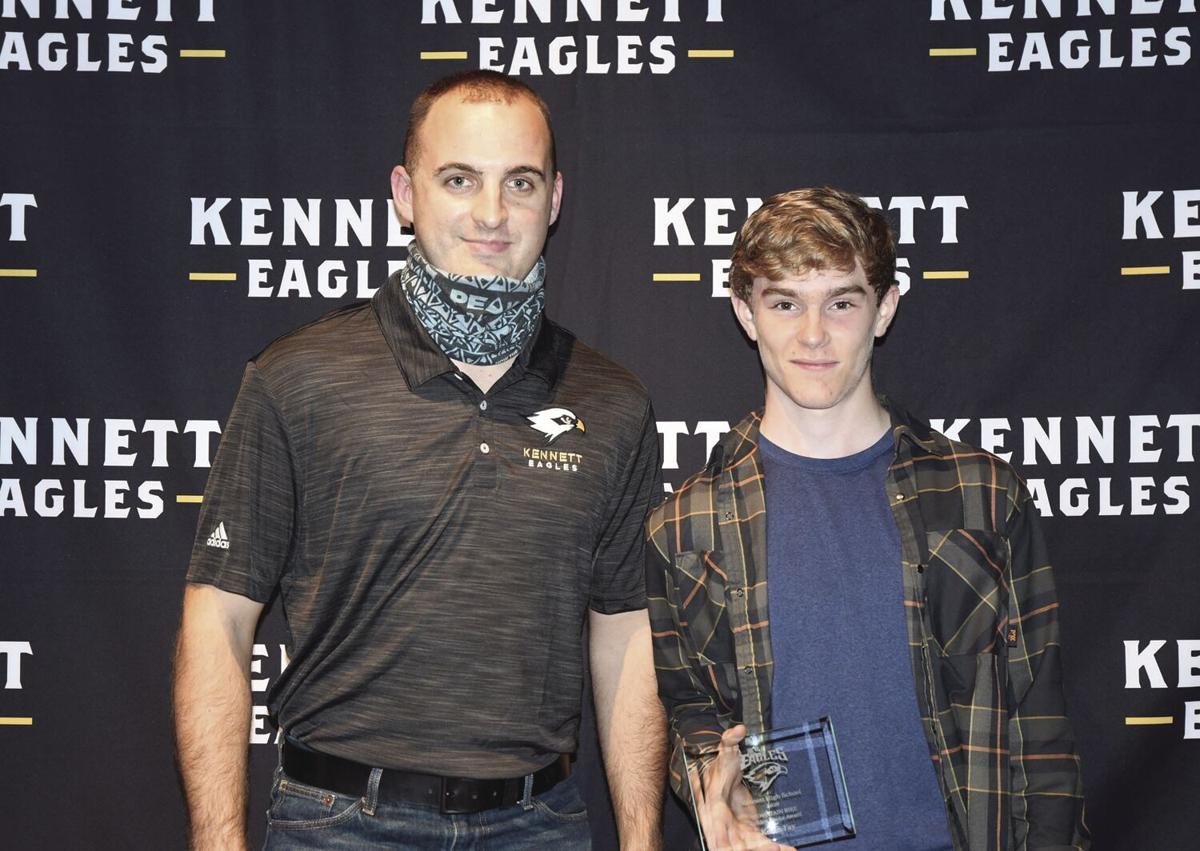 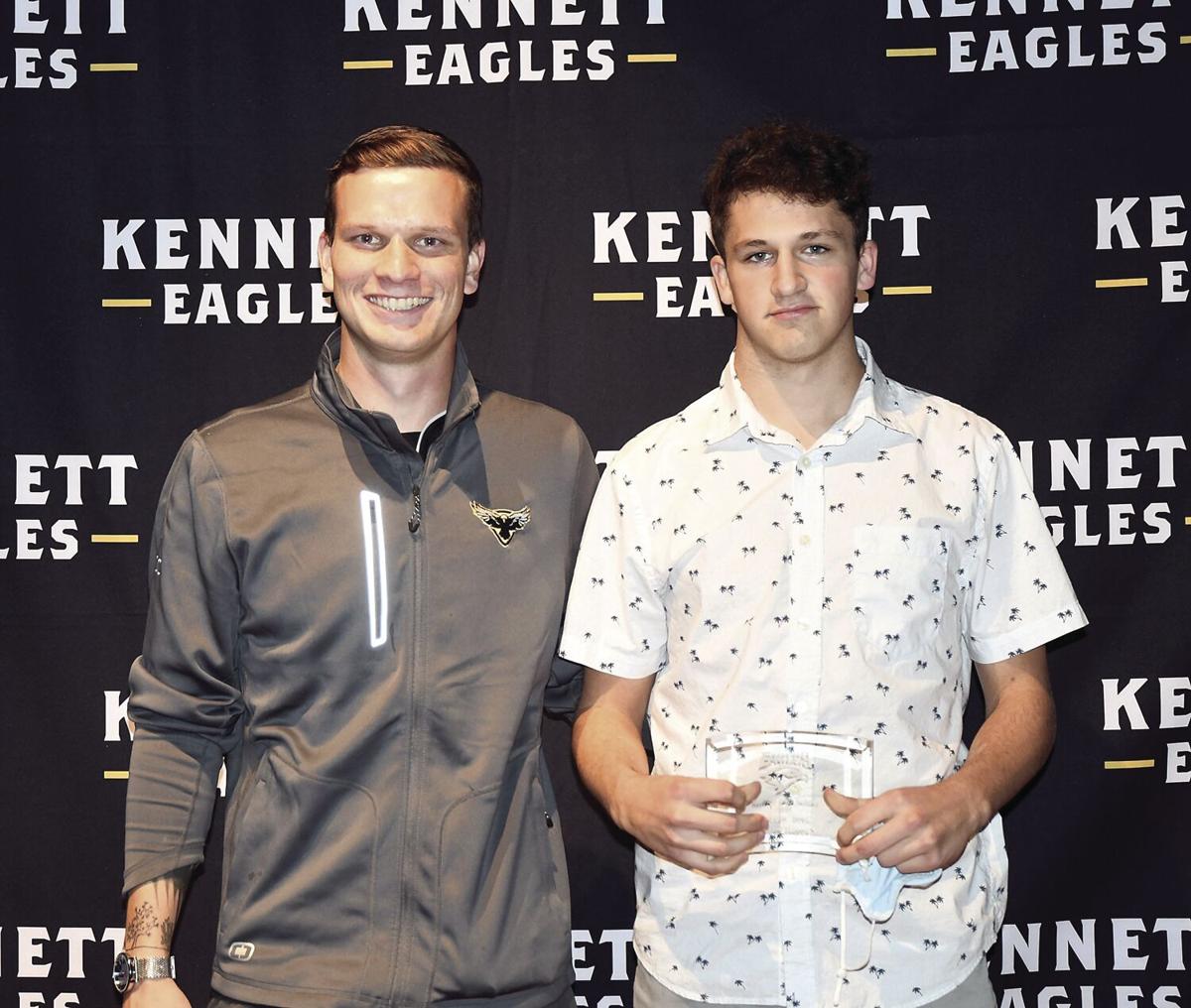 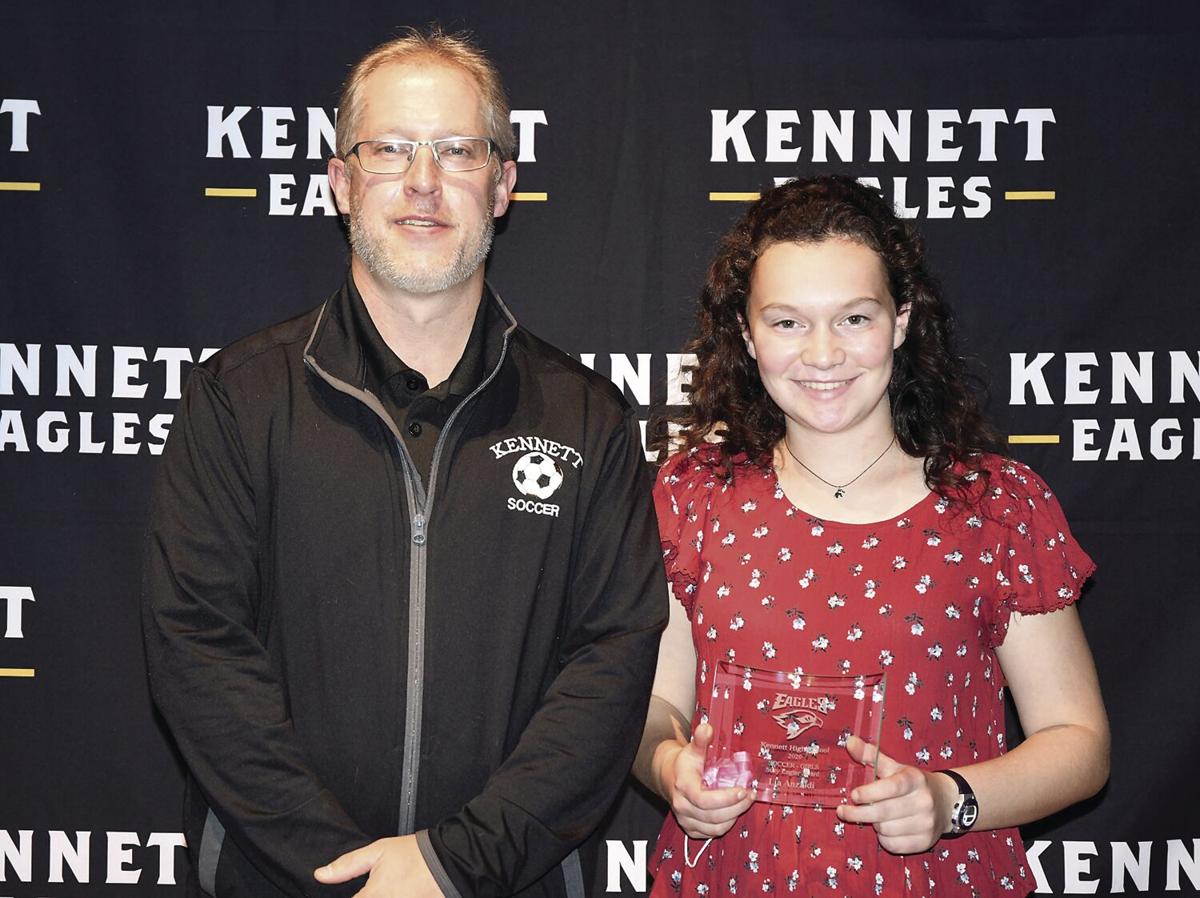 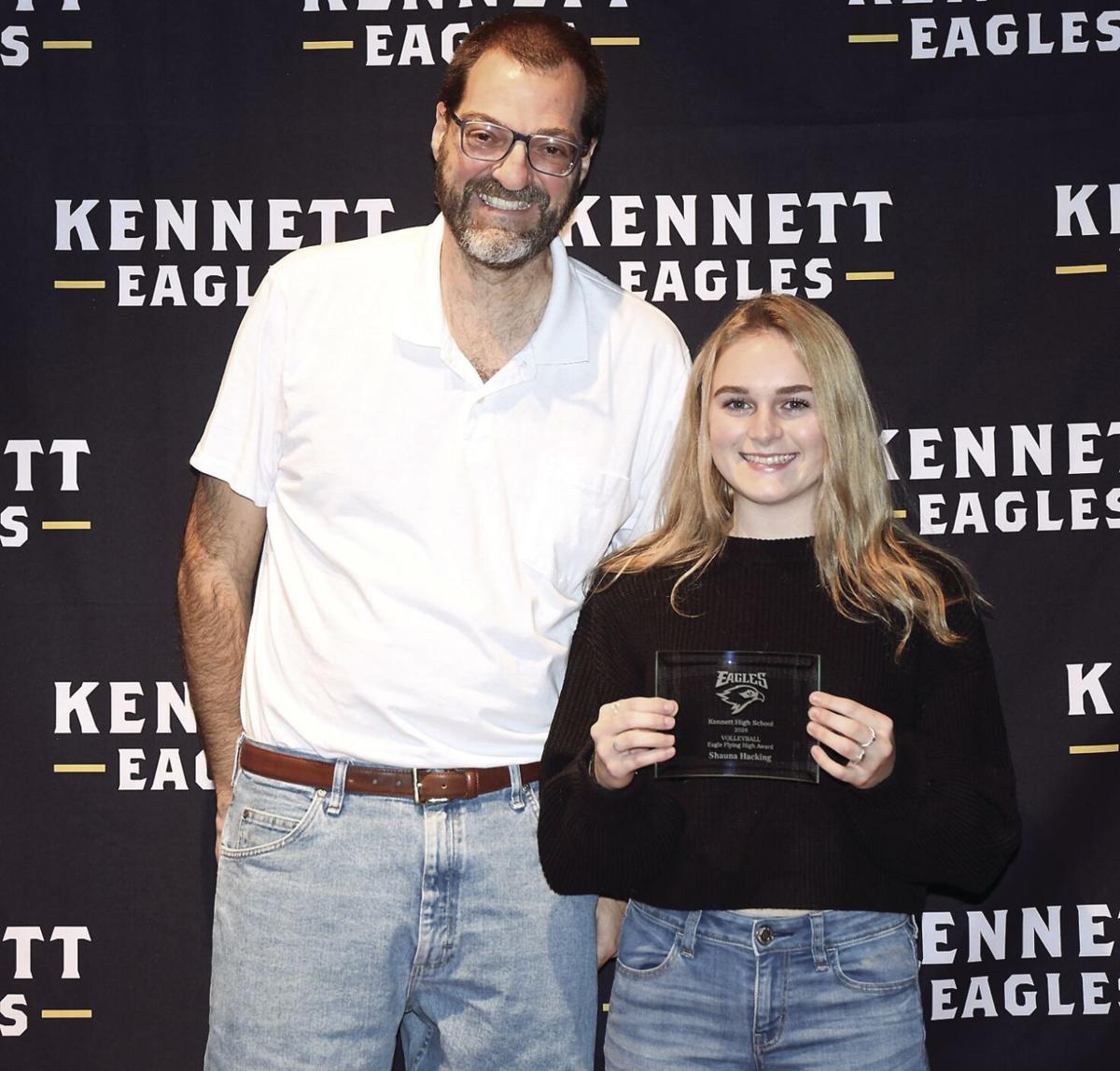 Only the major award winners and their families along with coaches, trainer Colby Locke and the media were able to attend the 45-minute ceremony. Everyone had assigned seating, wore masks and spread out throughout the auditorium.

Kennett High Athletic Director Neal Weaver served as master of ceremony for the evening, which kicked off with him expressing his gratitude that the fall season actually happened.

“Welcome to the 2020 fall Sports Awards night,” he said. “We have a lot to be proud of this year, not just the people in this room, but the accomplishments of all of our sports teams. And all that we, as a group has put in to make this season actually happen.”

This year's athletic award winners were:

In cross-country running, Coach Bernie Livingston presented the Cross-Country Award to Logan Violette for the boys and Amy Burton for the girls.

The cross-country award "is presented each year to the member of each team who both on the field and in the school best demonstrates the qualities of loyalty to Kennett High School, citizenship and sportsmanship — both as a follower and as a leader."

The Marsden Award "is presented to a senior, a player who demonstrates good sportsmanship and a positive attitude. This athlete is also very coachable, works hard, and is a committed member of the team."

“This player had a major presence on the field,” Daley said. “I have enjoyed working with this player a lot, watching her improve her skills, intensity and leadership and overcoming a major knee surgery from not even a year ago, but you wouldn’t even be able to tell it today. It’s an honor to be able to present this award to Maddie Stewart.”

The Deryl Fleming Award "is presented to the field hockey player that demonstrates true commitment, dedication and love for the game of field hockey."

“This individual has been involved in field hockey beyond the field and at Kennett High School and continues to strive to improve her skills,” said Daley. “This player has an incredible work ethic and continues to work hard even when no one is watching. And as a leader both on and off the field. I'm very pleased to present the award to Ella Chandler.”

The Sam Fuller Award is "given annually to a senior member of the football team, someone with great character and has displayed strong leadership skills, someone who has placed the needs of others and the team in front of their own, a truly unselfish player."

“I believe it's the oldest athletic department award that the school gives out,” Beckwith said of the Sam Fuller Award. “Sam Fuller is a Kennett High graduate and a veteran of our country who served during World War II and from my understanding was killed in action. And he was known as an outstanding teammate, would do anything that he could for the people around him. And, a lot of the things that we still value today on in our football program, being a good teammate, a good leader, doing the right thing.

He added: “This year was hard. Six or seven months ago none of us was sure what was going to happen. And Parker, took it upon himself to build a weight room on his property, and get his teammates there, to train and to get ready for the season and to practice on their own accord. Trust me, I wanted to be there, but I was told I couldn't and I wasn’t. Parker had an opportunity to provide things for his teammates and he did. And that's just his personality. An outstanding teammate, a great leader. I'm very happy to give this award to Parker Coleman.”

In golf, Ed Bradley announced senior Colby Hall as the recipient of the Golf Award.

The mountain bike award "goes to a deserving student-athlete who has participated in three or more seasons, has excellent character and attitude toward the sport and volunteer efforts to support the team in local events."

“It's awarded to the individual that demonstrates a high degree of responsibility and teamwork along with self-discipline, and a willingness to help others on the team as mountain biking continues to be a club sport,” said Gaudreau. This person really exudes a passion for mountain bikes and a love of the sport. I have two athletes that get this award tonight. The first one Parker Mustapha. Parker is one of the best individuals who I have had the pleasure of coaching. And because of him, we have new jerseys this year. And there's over 40 of those jerseys in circulation and not just on the team but with members of the community.”

He added, “The second athlete is probably the most talented mountain biker I have ever seen, and because of Kevin we are going to have a mountain bike team in the spring. While we will not be a varsity sport, it will be an opportunity for kids to ride their bikes, have fun, and not only stay active but learn life lessons.”

The Kennett Boys Soccer Award "is given to a player who from the first day of training to the last game has shown a consistent and always improving level of commitment to the team. He has proven to be a leader during training and during games."

“For me, I gave it to the person that I saw the dedication, commitment, leadership and just a love for the sport the entire season,” said Clark. “I saw a little bit of myself because I love this sport and I can see that he did as well. And he helped me out through the season. He was one of my direct lines to the team and helping make the season go smoothly. So the winner of this award is Riley Hayes.”

The Suzy Engler Award for girls' soccer "is given to a player who is dedicated to the team, shows a love of the game, enthusiasm for the sport, good sportsmanship both on and off the field and holds herself as a good leader."

“Leah this year, right out of the gates, our first sessions at the end of July you could tell she was a leader. And, that was approved by her teammates when she was easily voted into the captain spot. Throughout the year she showed dedication because we threw everything at her — you are a center-back, you’re a center midfielder. No, you're just going to cover this player no matter where they go on the field, and she did it every time with great effort, determination and focus for her teammates because if you play soccer and all you got to do is chase one person around the field all day, it’s not a lot of fun. So thank you very much for doing everything you did this year, and congratulations, Lia Anzaldi.

The volleyball award "goes to an individual who shows great improvement and skill throughout the season. Has a positive spirit and ability to motivate her teammates and is an asset on and off the court."

“She makes players better around her which Shauna has done all year,” Bartolomei said. “And, her leadership on and off the court was a great asset to me as a coach. Shauna was amazing this year. She gave her all to the point of practically killing herself most of the time, which was a little bit crazy in my eyes, but I knew I could always count on her to go and get a ball. …She was an excellent leader and an excellent person to have around. So, Shauna, you've earned this award with your play, your actions and your hard work throughout the season. Congratulations.”

All other fall athletes received their certificates and varsity letters remotely.