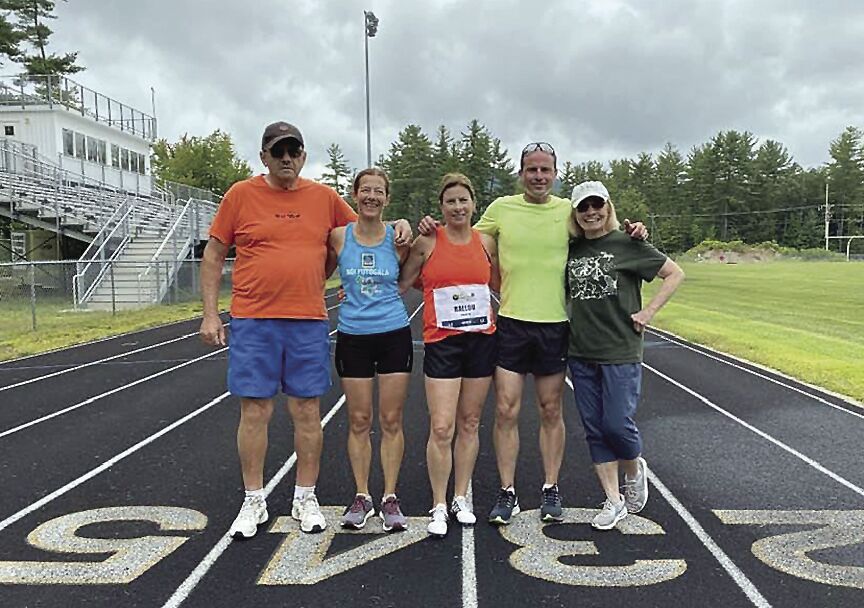 Terry (Livingston) Ballou (center) after running the 400 and 800 meters for the USA Track and Field Master Virtual Summer Challenge on Aug. 15. She won both national events, and credits her support team of (from left) Bernie Livingston, Suz Laughland, Tim Livingston and Eileen Livingston for her success. (COURTESY PHOTO) 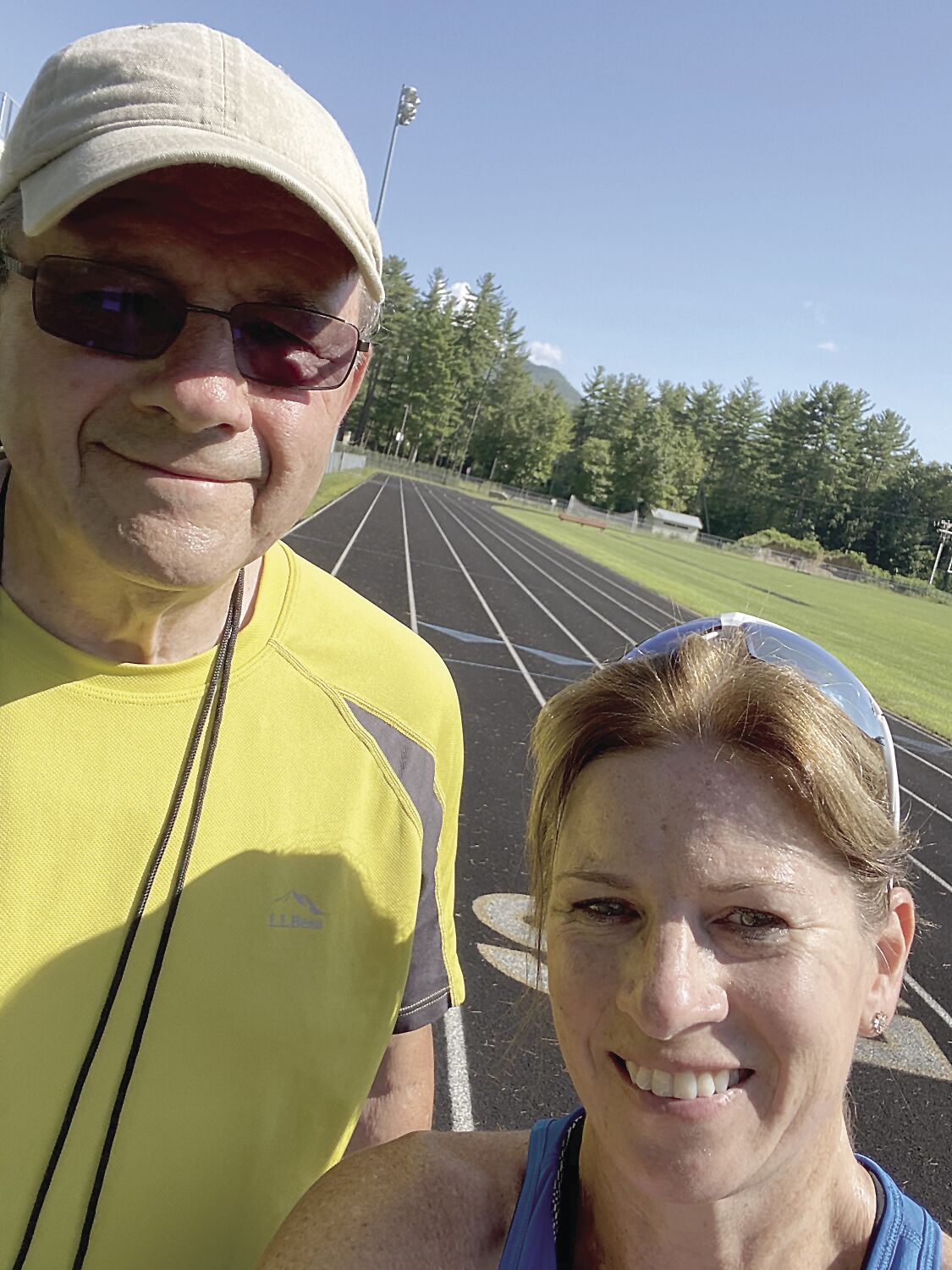 Terry (Livingston) Ballou and her father/coach Bernie Livingston take a selfie on the Livingston Oval after a workout. (COURTESY PHOTO) 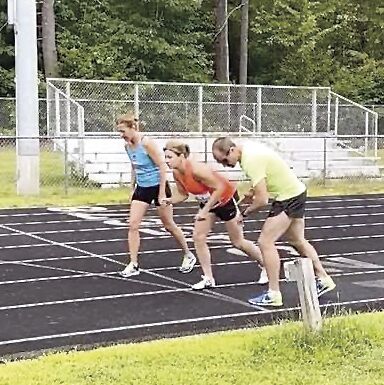 Terry (Livingston) Ballou (center) gets ready to run the 400 meters with Suz Laughland and Tim Livingston for the USA Track and Field Master Virtual Summer Challenge on Aug. 15. She won the national event. (COURTESY PHOTO)

Terry (Livingston) Ballou (center) after running the 400 and 800 meters for the USA Track and Field Master Virtual Summer Challenge on Aug. 15. She won both national events, and credits her support team of (from left) Bernie Livingston, Suz Laughland, Tim Livingston and Eileen Livingston for her success. (COURTESY PHOTO)

Terry (Livingston) Ballou and her father/coach Bernie Livingston take a selfie on the Livingston Oval after a workout. (COURTESY PHOTO)

Terry (Livingston) Ballou (center) gets ready to run the 400 meters with Suz Laughland and Tim Livingston for the USA Track and Field Master Virtual Summer Challenge on Aug. 15. She won the national event. (COURTESY PHOTO)

Ballou, 52, had been looking forward to representing the United States by competing against the top runners in the world at the Master's World Championships in Toronto, Canada, last month, but due to the COVID-19 pandemic, the in-person meet was canceled. Instead, the championships took place virtually with athletes running on their own and then submitting their times during a worldwide virtual challenge held July 18-Aug. 2.

Ballou also competed in the USA Track and Field Master Virtual Summer Challenge, winning both the 400- and 800-meter runs.

“The virtual races definitely kept me motivated through this trying time; and I ended up running faster than I’ve run in two years,” said Ballou. “So all in all, a great experience.”

Instead of running in Canada, Ballou headed to her “Oval Office,” at the Livingston Oval on the campus of Kennett High School, where under the watchful eye of her dad and coach Bernie Livingston, with help from a couple of friends to pace her, ran for time the 400 meters, 800 meters and the 1,500 meters.

“My dad came to the track with me and timed me; I was also fortunate enough to have my niece — Abigail Livingston, a standout runner who graduated from Dartmouth in 2018 — run with me in two of the events (the 400 and 800), and two other friends (Suz Laughland and Michele Henley) join in the 400 as well. I ran the 1500 solo.”

The field of runners for the 400 included athletes from Great Britain, Germany, Australia and the United States.

Competitors ran were able to run in three different categories:

“Category A — Pre-organized competitions run by organizations at an athletics facility like a track, designated jumping/throwing field or arena or gym with all applicable WMA rules being followed.

“Category B — Officiated competitions at an athletics facility. As described above, officials can be friends or fellow competitors timing, marking, measuring and calling fouls.

“Category C — Road, parking lot, field or wherever else the athlete can compete safely.

“Those in ‘A’ category ran in a sanctioned track meet,” said Ballou, “Unfortunately, I did not have access to any meets up here; some were run down south, like Georgia and Florida; those in category B ran on a track, with a family member or friend timing — this is what I did; those in Category C ran on the roads, using GPS — not everyone had access to a track due to COVID-19 closings.”

Also in the field were runners from Croatia, Panama and Germany.

“Thank you to all the athletes, officials, administrators, family and friends who made this event really special for the participants,” World Masters Athletics President Margit Jungsmann announced on the website. “Athletes, with the help of officials, coaches, family and friends, sometimes needed to be very creative while adapting to challenges so they could compete. Athletes found clear roads to sprint on, open fields to throw in and at least one even triple jumped on a tennis court — ouch! Other athletes were fortunate enough to compete on a track, jumping or throwing facility and sometimes in an organized and officiated meet. Regardless of how you competed, there is a place for you.

She added: “This Challenge was created in May of this year to give athletes a goal and to honor the canceled WMA Championships scheduled in Toronto from July 20 through August 1. Rules for and events contested in this Challenge are mirrored much of the rules and events at Toronto 2020. The dates were also selected to honor Toronto 2020 with a couple of days added to include three full weekends for competitions. Only one performance per event was allowed because athletes would only be able to compete in one final in Toronto.”

Athletes learned on March 26 that the championship would not be held live.

She earned 13 varsity letters as an Eagle, including three as an eighth-grader and was captain of the cross-country running, cross-country skiing and outdoor track teams her senior year.

Ballou went on to have a standout track career at Holy Cross.

“I won both my events but there were only two of us in my age group,” Ballou said, smiling. “Participants had to get video proof of their race, and I think this requirement dissuaded a lot of people from participating.”

“Closed out the 2020 track ‘virtual’ season today, running my fastest 800 in over two years in 2:32.8,” Ballou said Aug. 15. “At this age (52), it’s not about getting faster so much as who slows down least. As always, was lucky to have my parents (Eileen and Bernie Livingston) there to time and cheer me on; my niece (Abigail Livingston) to video; my brother (Tim Livingston) to pace me perfectly; and my good friend (Suz Laughland) to compete against. My support team rocks!”