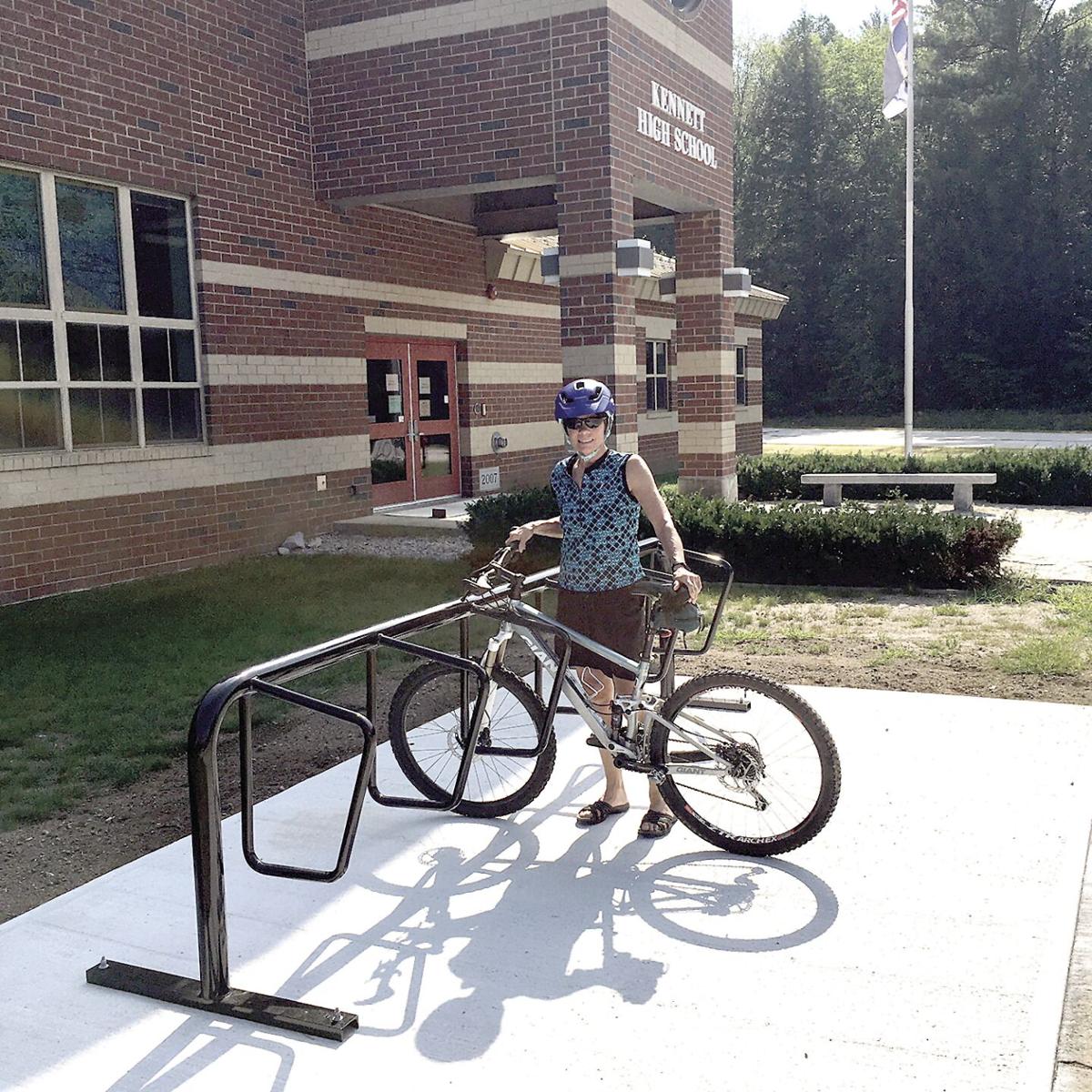 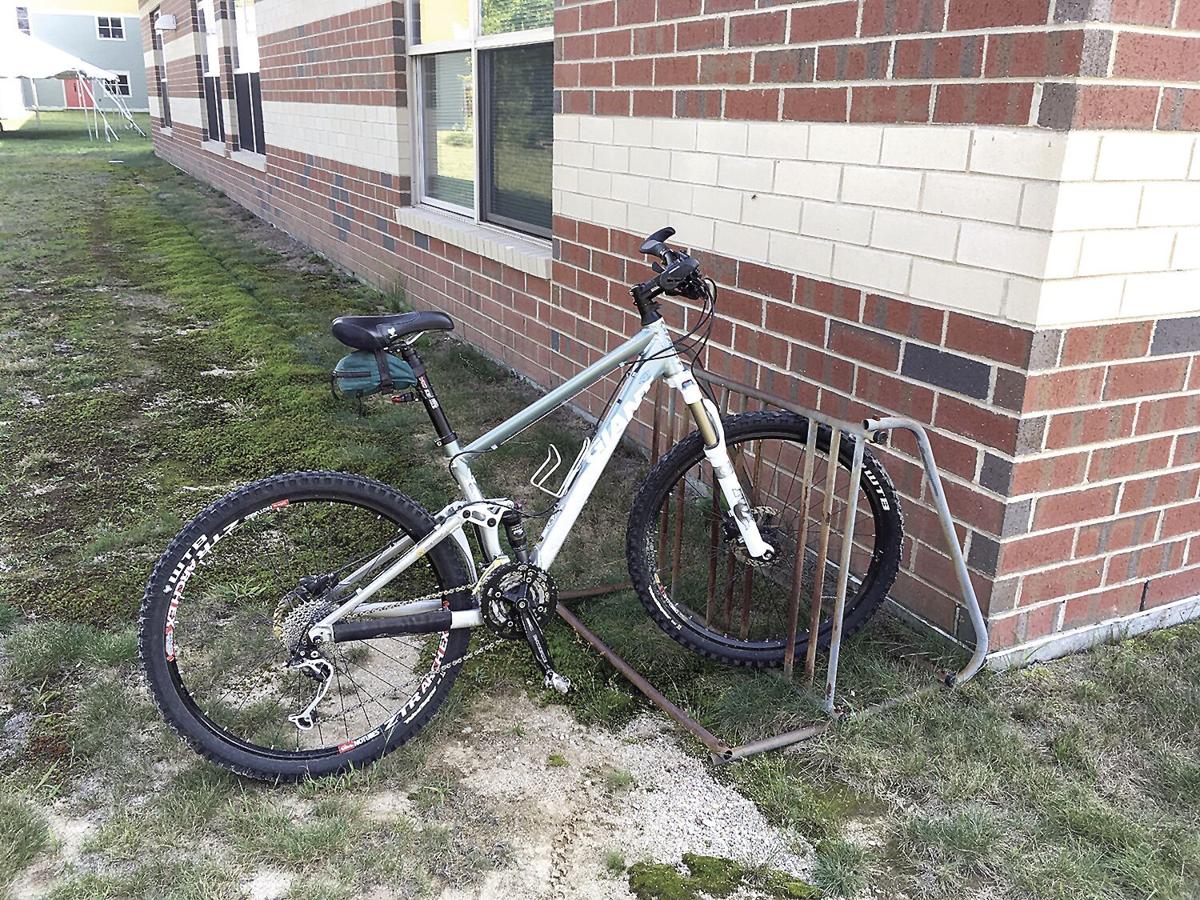 This month, the old rack was found around the corner of the building, It was still serviceable, but small and not anchored. (SALLY MCMURDO PHOTO) 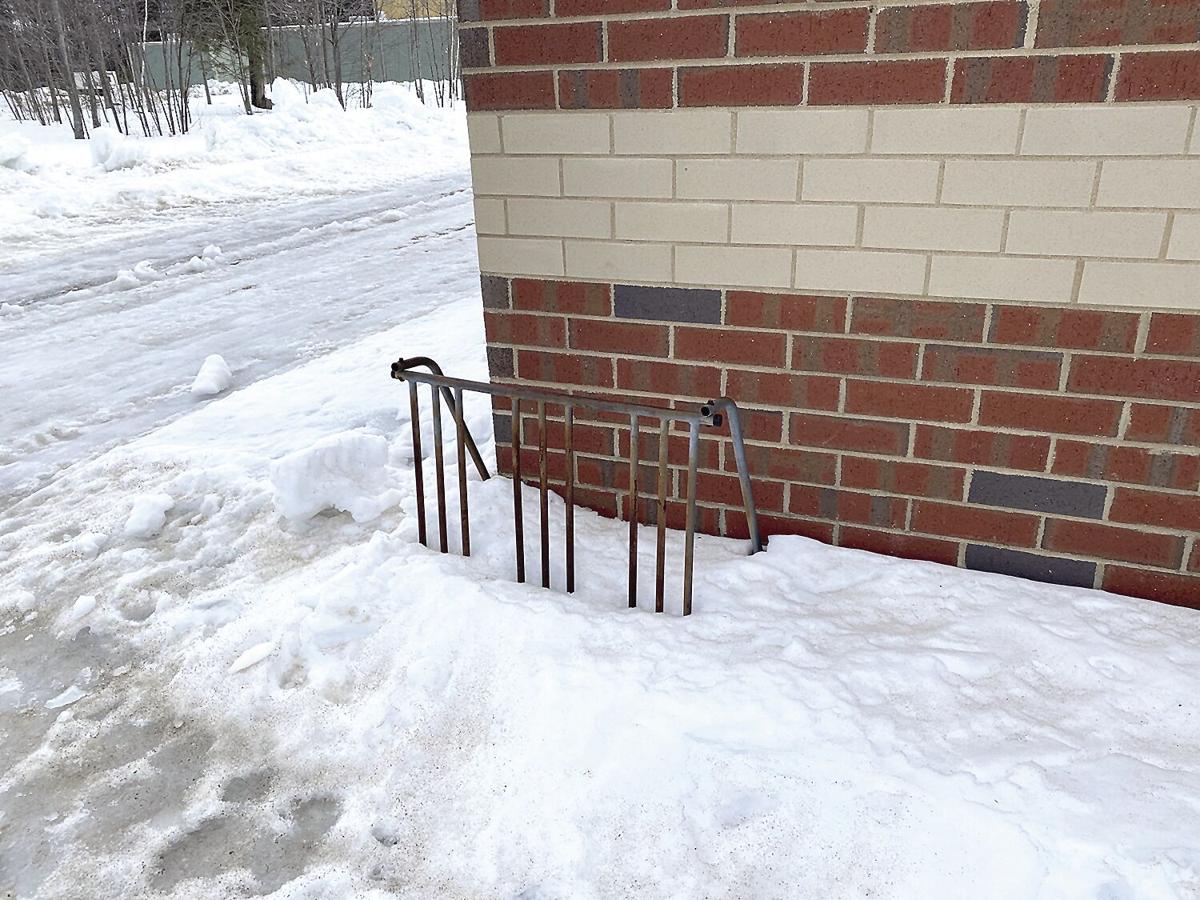 This is the old rusty bike rack, buried in the snow at Kennett High School. It starts the story of how the high school got a new, modern 12-bike rack installed this month for students and staff to use. (CHRIS DARLING PHOTO) 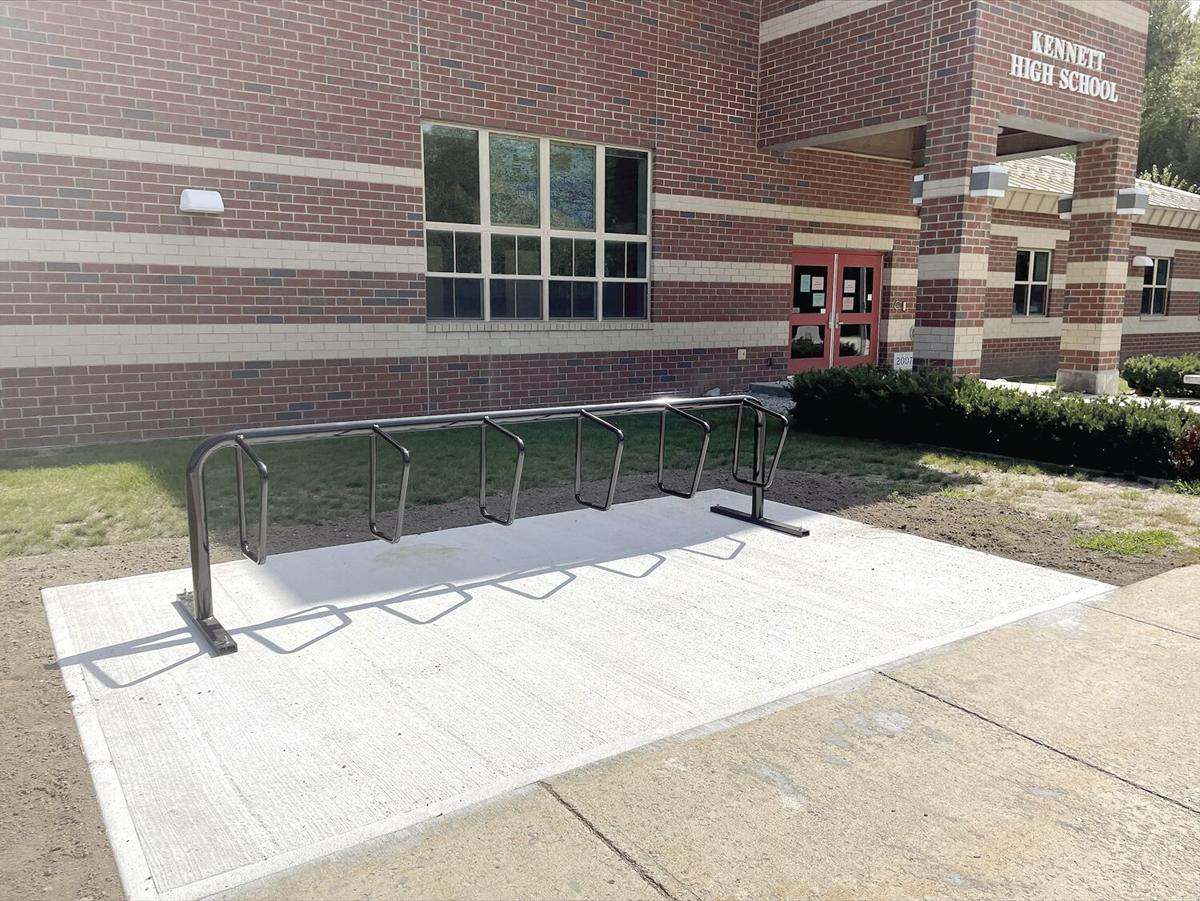 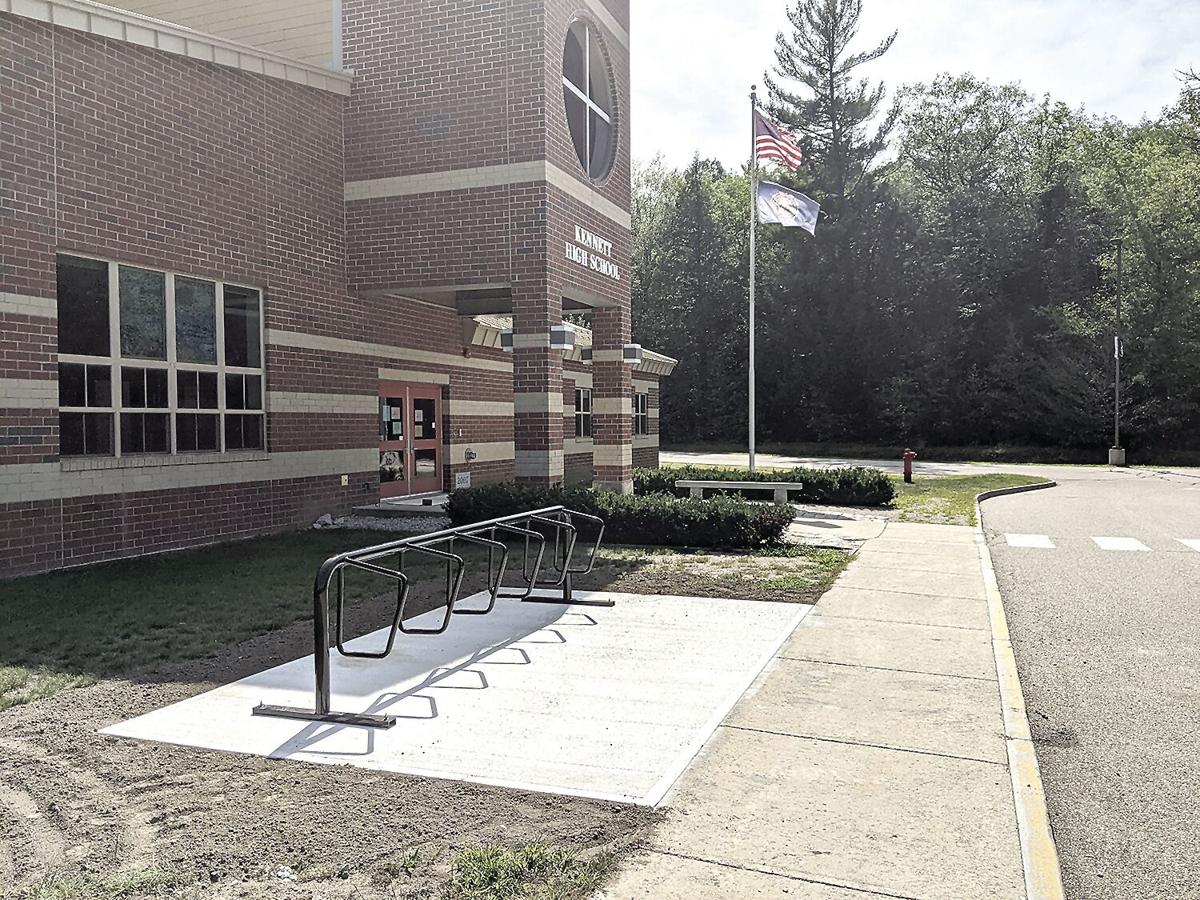 The newly installed rack is located at the front of the high school where cycling students, visitors and commuting staff can park their bicycles. (BILL BALLOU PHOTO)

This month, the old rack was found around the corner of the building, It was still serviceable, but small and not anchored. (SALLY MCMURDO PHOTO)

This is the old rusty bike rack, buried in the snow at Kennett High School. It starts the story of how the high school got a new, modern 12-bike rack installed this month for students and staff to use. (CHRIS DARLING PHOTO)

The newly installed rack is located at the front of the high school where cycling students, visitors and commuting staff can park their bicycles. (BILL BALLOU PHOTO)

Darling was emailing them about Crank the Kanc preparations. MWVBC and Kennett Mountain Bike Team partner to put on the bicycle race up the Kancamagus Highway every May. After announcing a Zoom meeting to discuss registrations, Chris added this to his email:

“Also, I wanted to share an idea I had today while outside with our environmental science class. We were having an outdoor classroom and I noticed the KHS bike rack at the front of the school. It is really pathetic and unsafe.

“I was wondering if other schools also had no bike racks/poor quality/safety. What does the club think about a program to replace and install lockable high-quality bike racks to encourage students (and staff) to commute to their schools? What do you all think?”

Darling is an avid cyclist who regularly cycle commutes in all seasons from his Lovell, Maine home to school. He felt students and staff riding to school needed a better/safer place to rack their bikes.

The current rack was an old rusty six-bike stand, stuck off on the side of the building, unsecured. Chris wanted to encourage more people to use their bikes for transportation. He felt having a secure rack was one way to do it.

In a phone conversation Wednesday with Chris, he told me when the new high school was built in 2007, there were no accommodations for cycling students. When he brought up the issue, the school bought that small rack, but never found a permanent place for it. It was often tossed around, put in different places or forgotten in the spring. Students had to find their own places to store their bikes. Many just leaned them up against the school.

This spring, Chris sought to change that. He wanted the students to have a secure place to put their bicycles. Having that designated “parking place” would also promote the idea that kids and staff can use bicycles as transportation to and from school. Darling talked with his principal, Kevin Carpenter. He was all for it. All Chris had to do was come up with a rack and have it installed.

The Kennett Mountain Bike Team gets a lot of mechanical support from Anthony Walker, owner of The Bike Shop. Through that connection, Chris knew Anthony had a very nice, custom-built, 12-bike rack in his shop. Anthony had ordered it for a local hotel, but when it arrived, they didn’t take it. There it sat in his shop, waiting to be used.

Enter the MWVBC board members John and Bill. When Chris told them about the rack, they checked it out. Anthony offered to them at cost — about $1,500. They made a quick decision to buy it. Now, the issue was where to put it and who was going to install it.

It was determined that the best place for it was right in front of the school where everyone would see and use it. Installation was another challenge. Chris checked with the school maintenance department, but they were too busy to handle it. He asked the bike club if they could install it.

John and Bill knew they didn’t have the expertise or equipment. They tossed around several ideas. Finally, Bill called Conway Town Hall to see if anyone there could help. He was put in touch with Andrew Smith, the town’s public works director. Smith called him that afternoon and agreed to meet him at the high school in two hours to discuss the project.

Smith told Bill the public works staff could do the site work and prepare the slab if someone provided the concrete. The next call Bill made was to Harry Mann, an MWVBC member. He had a feeling Harry knew someone who would donate that concrete and have it poured. Harry contacted Noah Coleman, one of the owners of Coleman Concrete. Coleman generously agreed.

The concrete was delivered, the public works staff smoothed it out, and the placement pad was ready for rack installation. Who would go get the rack and then install it?

John and Bill took on the final challenge. They borrowed a flatbed truck, picked up the rack from Anthony and drove it up to the high school. They drilled the necessary holes and drove in the anchor bolts to hold the rack securely in place. Mission accomplished!

It all started with Chris Darling’s idea to provide a lockable bike rack for students and staff to use to encourage more cycling. When he reached out to MWVBC whose mission is to “Promote safe cycling, unite cyclists and foster youth cycling throughout the Mount Washington Valley,” he had an ally. The bike club purchased the rack needed from local bike shop owner, Anthony Walker. Conway Town Public Works Director Andrew Smith and his crew gave their time and skills to prepare the site. A local business, Coleman Concrete, donated concrete and the pad was set. John Higgins and Bill Ballou completed the story by delivering and installing the rack.

With all the community conflicts we read about in the paper lately, it’s nice to have a positive story to tell. It may be just a bike rack, but it’s really a symbol of what can be accomplished when people, businesses and organizations work together. Thank you to all who contributed time, money and effort to this project.

Drive up or better yet, bike up to Kennett High School to check out the new rack. It’s a very solid, well-designed rack, placed prominently to the left of Kennett’s front entrance. It will provide years of service to students, staff and visitors who need a place to park their bikes. The rack will also serve as an encouragement to community cycling by saying, “ride bicycles — they’re welcomed and safe here.”

Summer Race Series Mountain Bike Race: Saturday, Aug. 28, Gorham, on Coos Cycling Club’s trail network. This is the fourth of the five-race series. For information and to register, go to tinyurl.com/2f87mwkr.