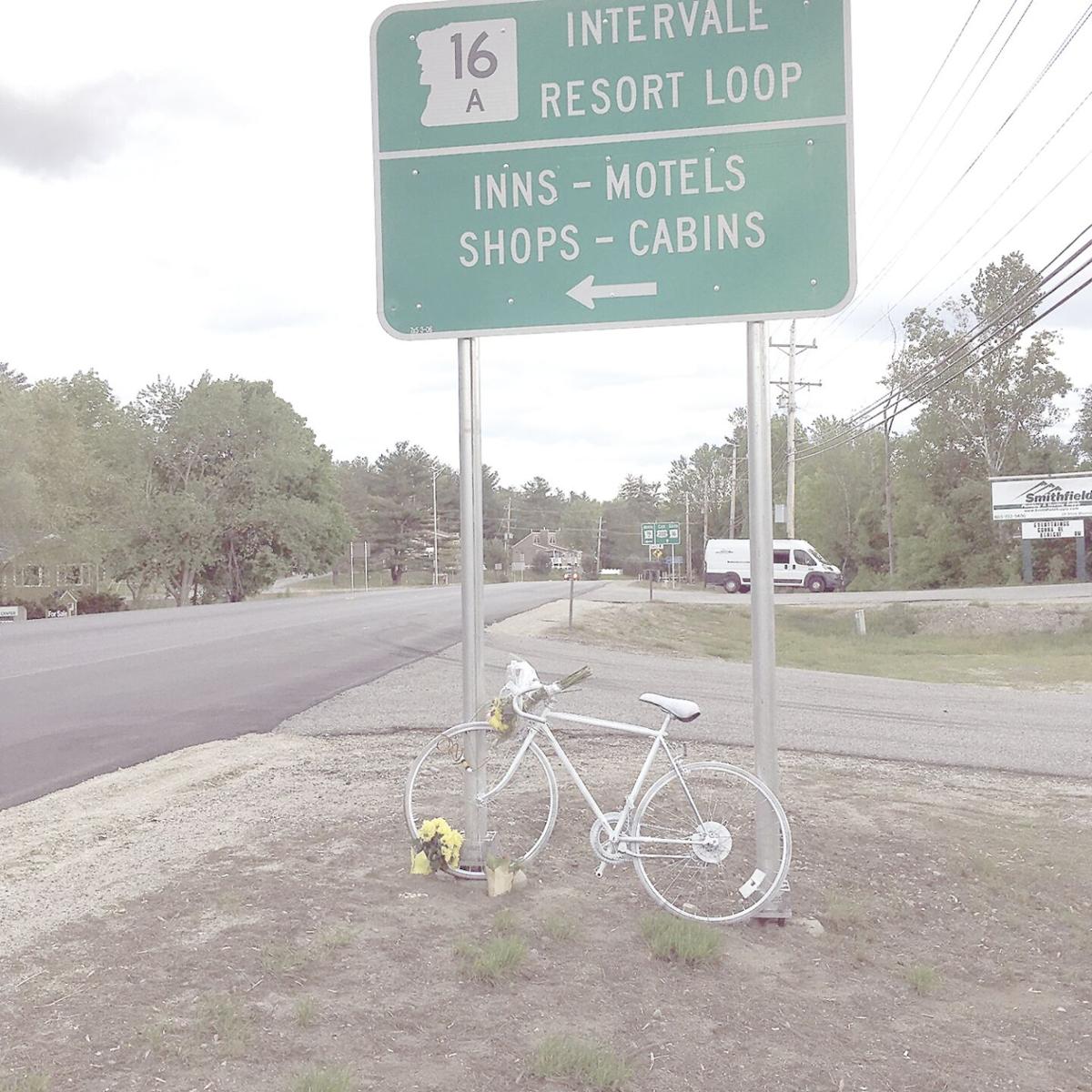 This "ghost bike" memorial appeared last week in Intervale near where cyclist Dick Devellian died after being struck by a car. (SALLY MCMURDO PHOTO) 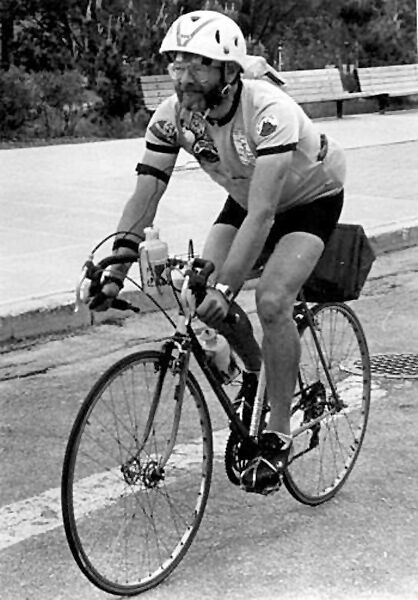 John Forester, "Father of Vehicular Cycling" and author of Effective Cycling, rides his bicycle confidently on the road. (COURTESY PHOTO) 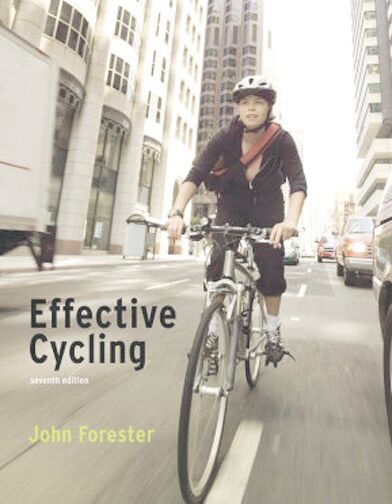 “Effective Cycling,” by John Forester, taught bicyclists how to ride confidently and safely on the road. (COURTESY PHOTO) 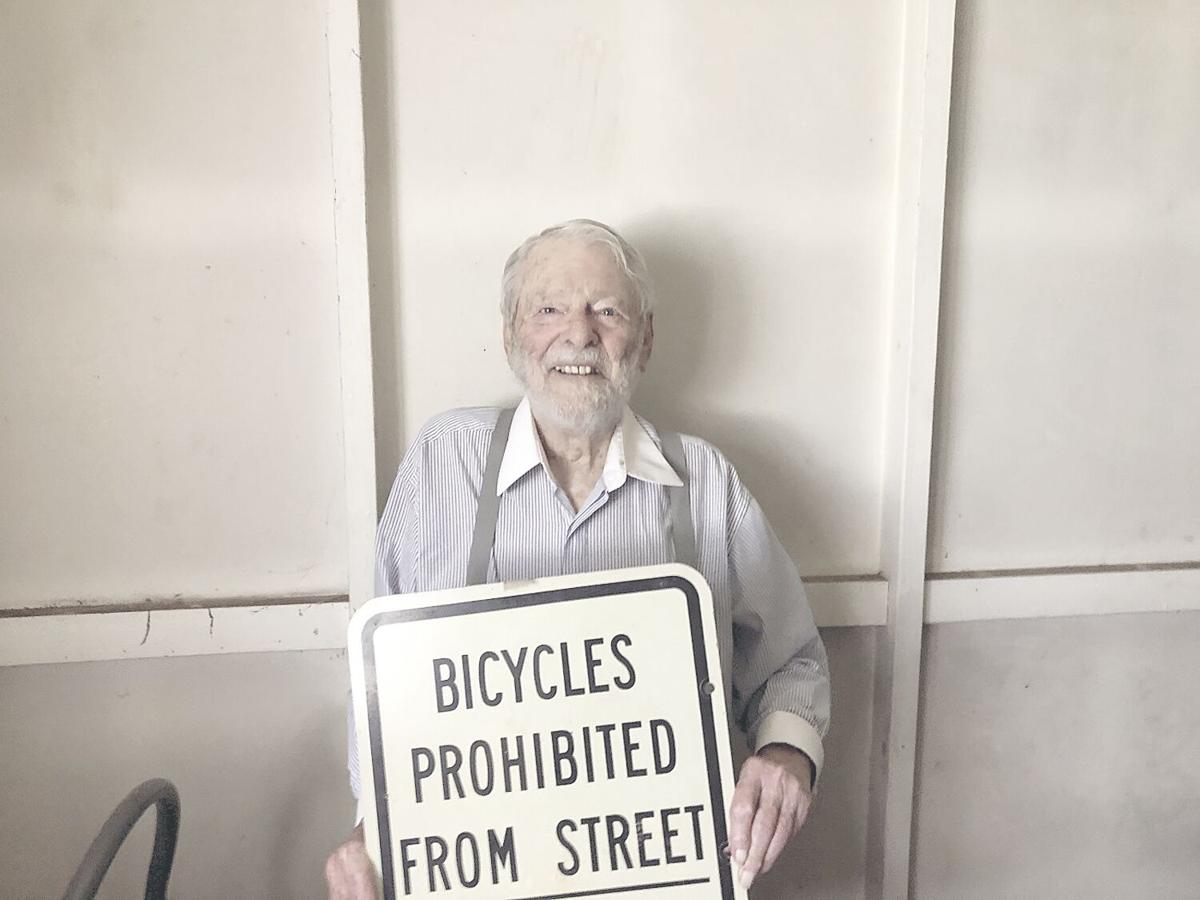 John Forester, regarded as the "Father of Vehicular Cycling" is the author of "Effective Cycling." (COURTESY PHOTO) 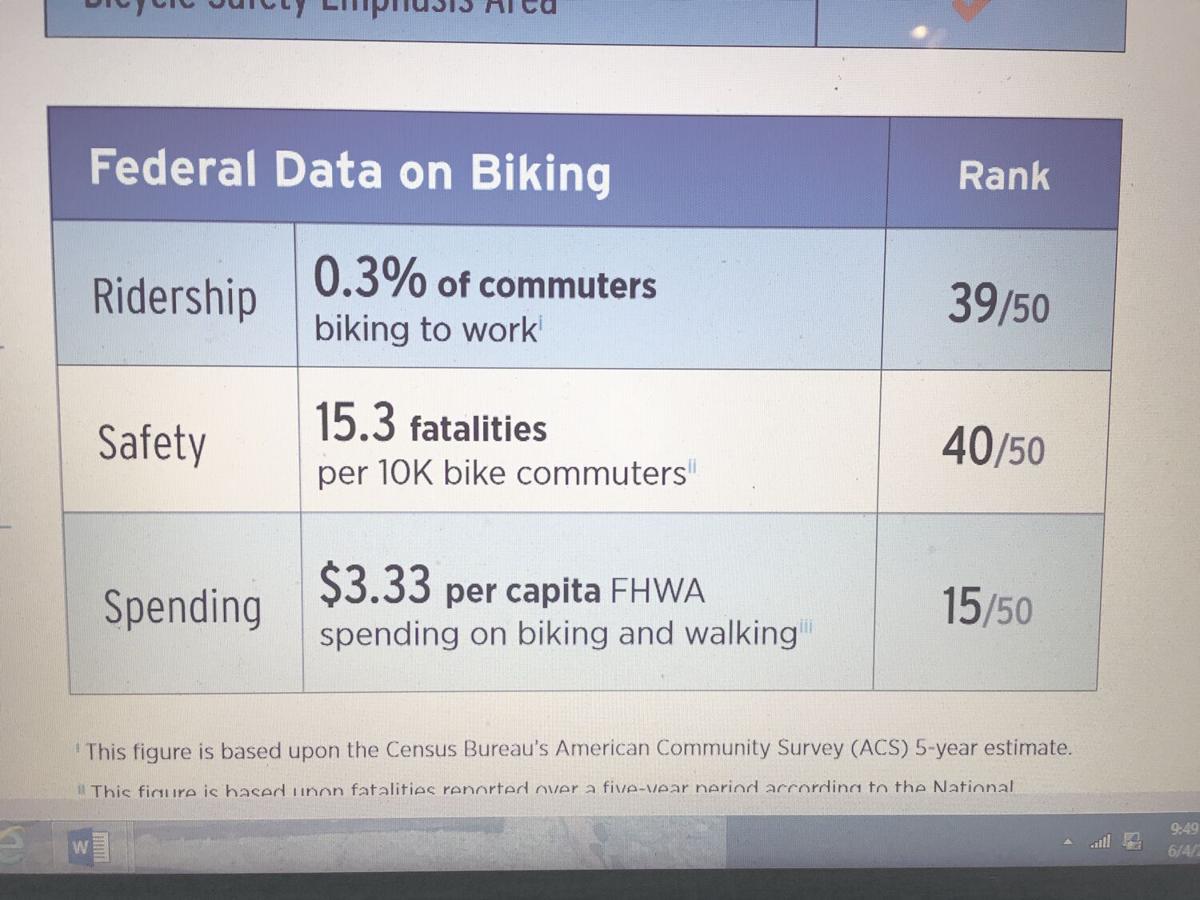 The League of American Bicyclists listed these statistics for NH cyclists for year 2019 on their "Bicycle Friendly State Report Card." NH ranked 36 out of 50. (COURTESY PHOTO)

This "ghost bike" memorial appeared last week in Intervale near where cyclist Dick Devellian died after being struck by a car. (SALLY MCMURDO PHOTO)

John Forester, "Father of Vehicular Cycling" and author of Effective Cycling, rides his bicycle confidently on the road. (COURTESY PHOTO)

“Effective Cycling,” by John Forester, taught bicyclists how to ride confidently and safely on the road. (COURTESY PHOTO)

John Forester, regarded as the "Father of Vehicular Cycling" is the author of "Effective Cycling." (COURTESY PHOTO)

The League of American Bicyclists listed these statistics for NH cyclists for year 2019 on their "Bicycle Friendly State Report Card." NH ranked 36 out of 50. (COURTESY PHOTO)

A white bicycle, chained to a road sign, stood in sharp contrast to its background. It was a “ghost bike,” a memorial to a cyclist who was struck by a car and died near that spot.

Last week, one appeared on Route 16 in Intervale near where Jackson’s Dick Devellian died. It was a fitting memorial to the valley cyclist.

I don’t know who put it there, but I’m glad they did. It reminds us all — cyclists and drivers — to be vigilant on the highway and to watch out for each other.

A Wikipedia article on ghost bikes traces their history. “According to The Guardian, the first recorded ghost bike was in St. Louis in 2003. A witness to a collision between a cyclist and a car placed a painted bike at the location with a message that read 'Cyclist struck here.' Since then, over 630 ghost bikes have appeared in over 210 locations where cyclists have been killed or severely injured by a motor vehicle. These roadside memorials serve as reminders to all to ‘share the road.’”

If you are a bicyclist and decide to ride on the road, you have to accept there’s risk involved and be prepared to deal with it. It’s not a cyclist-friendly road out there. Many drivers view you as an impediment to their progress or, worse yet, don’t even notice you until it’s too late. They will question your right to the roadway and even threaten you.

Don’t count on motorists to be considerate, or even aware of you. It’s up to you to make your presence known and to take your “share” of the road.

John Forester, author of "Effective Cycling," died this April halfway to his 91st birthday. His most famous quote was, “Cyclists fare best if they act and are treated as drivers of vehicles.” Many regard him as the “Father of Vehicular Cycling.” He told cyclists not to be “road sneaks,” timid about taking their place on the roads.

At Fryeburg’s 2008 Maine Bike Rally, I enrolled in the League of American Bicyclist’s Safety Instructor training. This intensive, three-day training in the classroom, parking lot drills and on the road  taught me to be a safer, more confident rider. I then understood what Forester was talking about — cyclists have to assert their presence.

Once I adopted this principle, communication and assertiveness became as important as riding the bike. I had to show that I knew what I was doing in traffic and had a right to be there. No more “road sneak” for me!

Even skilled riders have “crashes.” Notice, I use the word "crash" not "accident," a word that implies "nothing could be done.” Someone did something wrong that caused the crash — it was no accident. The rider might be doing everything right, but drivers make mistakes. They go too fast, don’t heed signals, are inattentive and just don’t factor in the presence of a cyclist. They become “road blind,” only focusing on where they need to go.

What can a rider do to get noticed? First, wear bright and reflective clothing, and use front and blinking rear lights, even in the daytime. Ride on the right, heading in the same direction as traffic. Use hand signals and eye contact to let drivers know what you’re going to do. Obey traffic signs and signals.

When you need to “take the lane” for the safest road position, let drivers know by pointing, checking behind you and assertively taking your place. Don’t be shy!

Before a cyclist rides on the road, he or she should have reliable equipment and riding skills. Make sure tires are well-inflated  and carry a pump, CO2 canister and an extra tube. Test the brakes so you know they’ll stop you immediately. Go through the gears, making sure the bike shifts easily and reliably. Give the bike an all-over check to make sure nothing is loose, dangling or broken.

If you’re sharing the road with cars, you need to be able to balance, ride a straight line, stop efficiently, keep a steady pace and act predictably. If you can’t do those things, stay off high-traffic roads until you can.

There’s always a certain amount of risk when you go on the road. To get  statistics, I contacted Conway Police Chief Ed Wagner and Bike Walk Alliance New Hampshire Board President Paula Bedard and Board Treasurer/Founder Dave Topham.

The problem with getting accident statistics, as Chief Wagner and Dave both told me, is how they are collected. The chief could not give me a number without going through stacks of accident reports. Dave told me that "facts for N.H. bike-ped crashes and fatalities always seems hard to find. Many times the police reports are incomplete or bike incidents are logged as "pedestrian" incidents.”

Paula said, “What I can tell you is that statistically, over the past five years, N.H. is considered to have a fairly low number annually for collisions involving bicyclists (serious as well as fatalities).”

She cautioned that in a “reported” non-fatal bicycle crash, at least one of the following conditions would apply: It involved personal injury and/or the cost of the damages was equal to or exceeded $1,000. I’m guessing there were more that went unreported.

Dave shared the League of American Bicyclists “Bike Friendly State Report Card.” In 2019, N.H. ranked 36th out of 50 states. It had 0.3 percent of commuters biking to work and 15.3 bicycle fatalities per 10K commuters. Once again, numbers are low for fatalities, but even one is one too many.

Bicyclists should consider the risks and make decisions about where and when to ride, given the conditions, their skills and their comfort level. Some may decide not to ride. Others, to ride off-road or on bike paths. Others pick their roads and times carefully.

To have safer streets for everyone, all road users and citizens need to demand them. It’s only through advocacy and education that the situation will improve. We don’t want to see any more ghost bikes in the valley. One is too many.