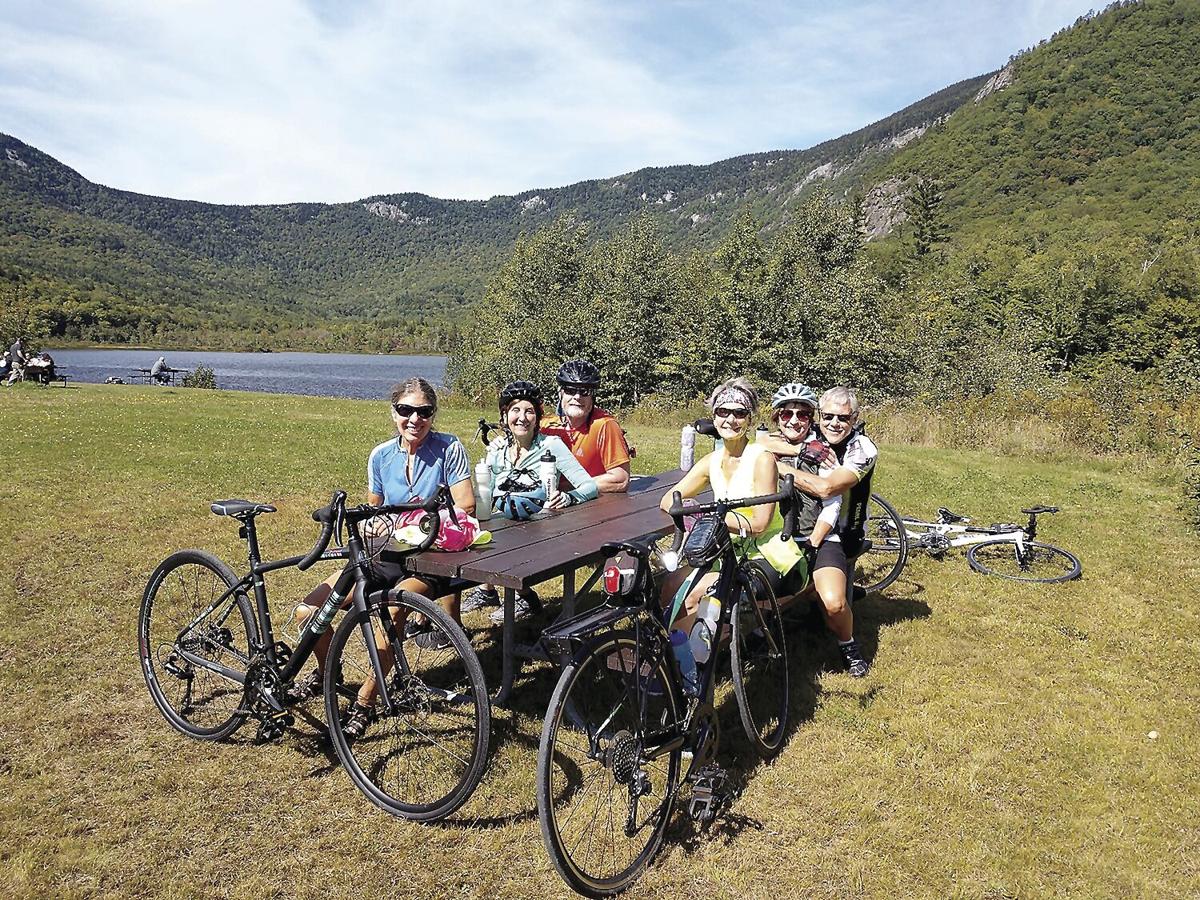 Years ago, Mount Washington Valley Bicycling Club riders rode up to the picnic area, enjoyed a break and the fine views of Basin Pond and Baldface behind it. (COURTESY PHOTO)

Cyclists riding up the rocky road to the Basin are rewarded with this view of the pond and Baldface behind it. (COURTESY PHOTO) 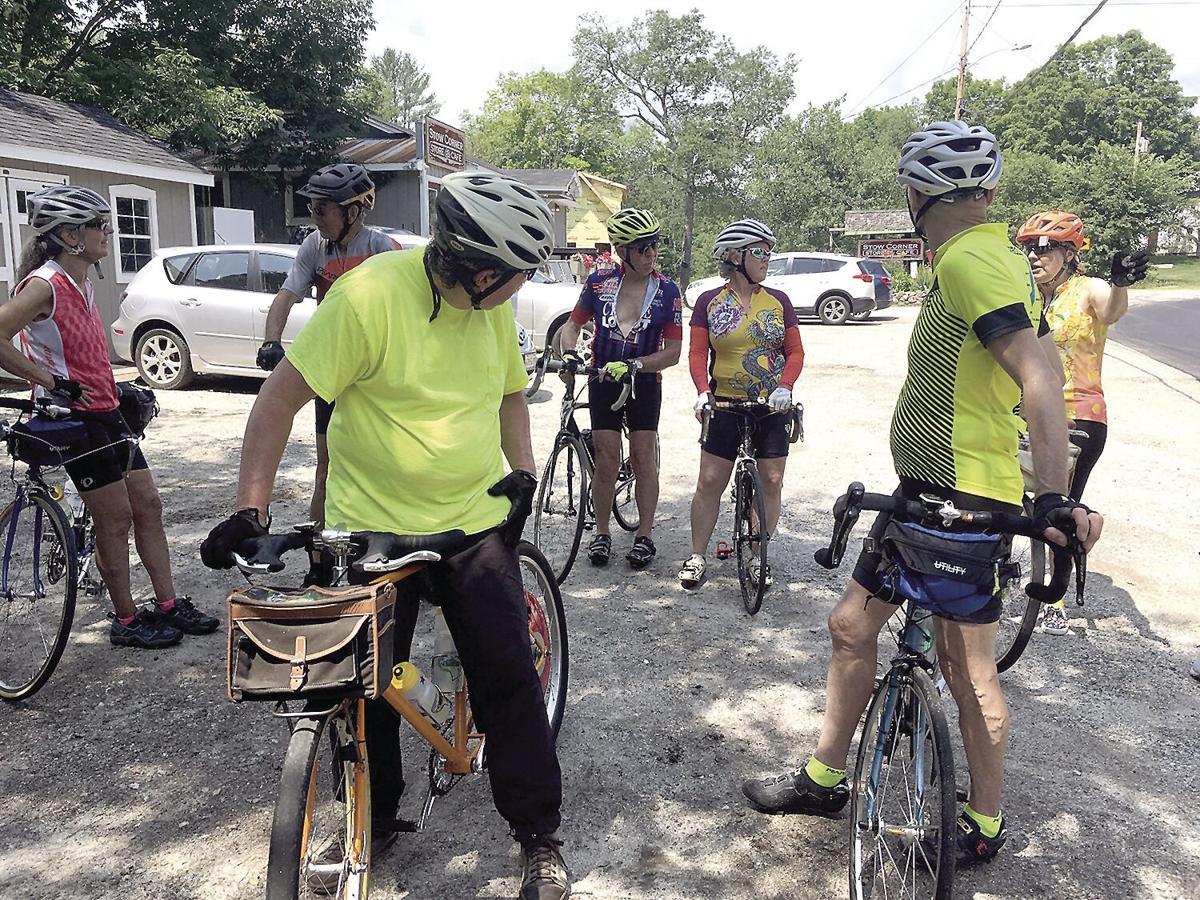 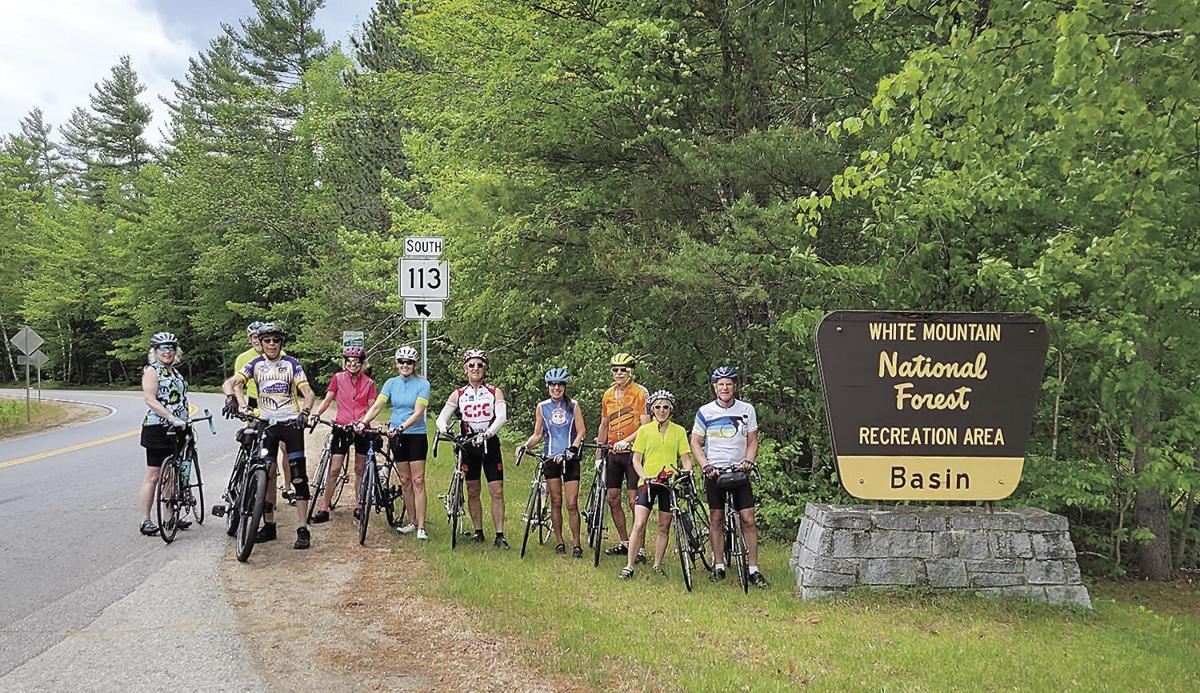 At a ride to the Basin this spring, Mount Washington Valley Bicycling Club members stop by the Basin Recreation Area sign. (COURTESY PHOTO) 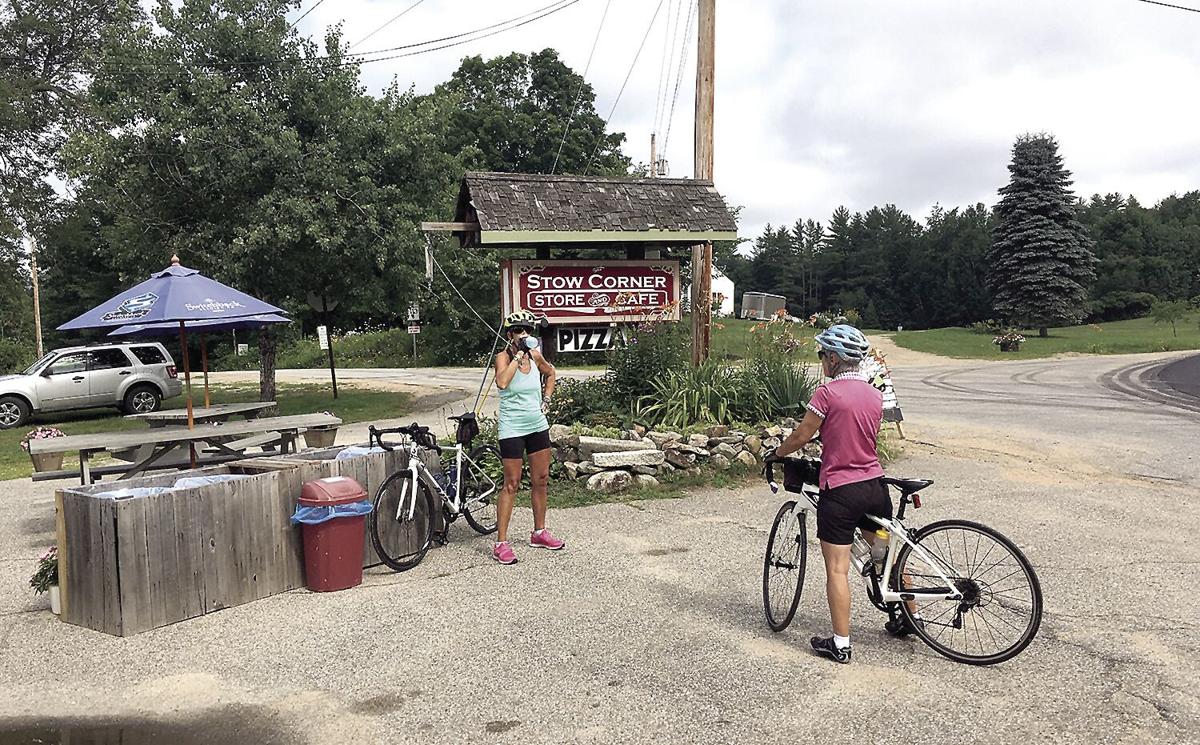 Riders make the first stop at the Stowe Store were disappointed this time — it was closed! (SALLY MCMURDO PHOTO) 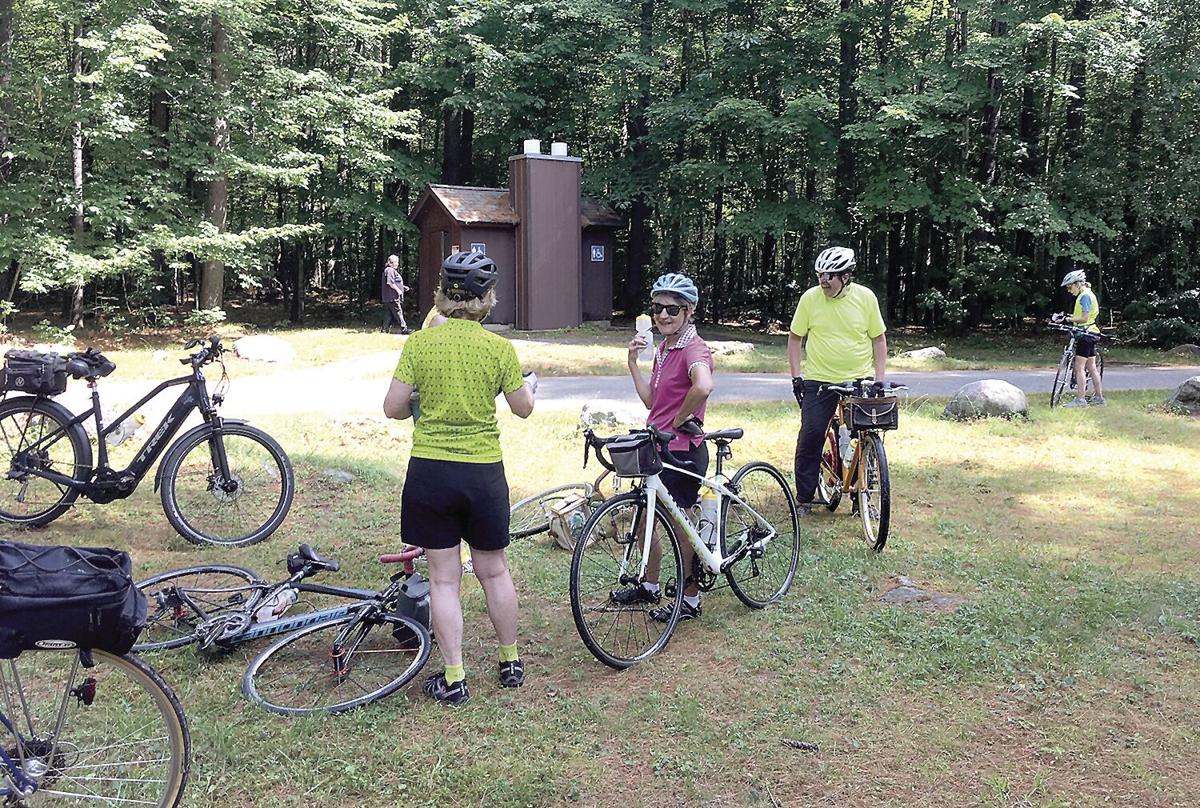 At the Basin's Cold River Campground, riders stop to refill their water bottles, use the facilities and have some snacks. (SALLY MCMURDO PHOTO) 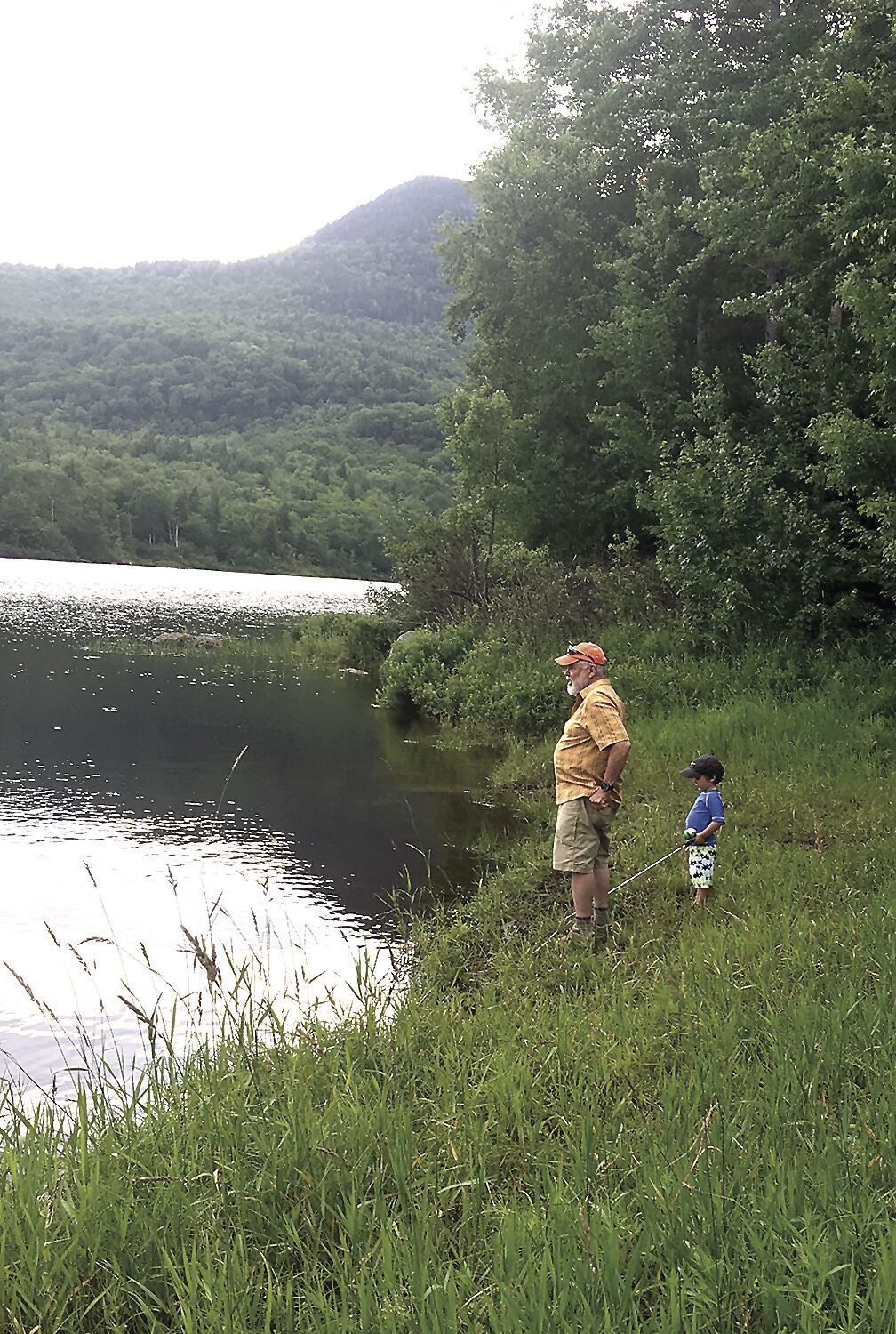 Years ago, Mount Washington Valley Bicycling Club riders rode up to the picnic area, enjoyed a break and the fine views of Basin Pond and Baldface behind it. (COURTESY PHOTO)

Cyclists riding up the rocky road to the Basin are rewarded with this view of the pond and Baldface behind it. (COURTESY PHOTO)

At a ride to the Basin this spring, Mount Washington Valley Bicycling Club members stop by the Basin Recreation Area sign. (COURTESY PHOTO)

Riders make the first stop at the Stowe Store were disappointed this time — it was closed! (SALLY MCMURDO PHOTO)

At the Basin's Cold River Campground, riders stop to refill their water bottles, use the facilities and have some snacks. (SALLY MCMURDO PHOTO)

Sometimes, you get in a rut and forget to explore other options. Lately, I’ve been on a predictable schedule of completing my column on Thursday mornings. That means I’m always too busy on Thursdays to go on Marianne’s Thursday rides. Cycling-wise, I’ve been primarily riding my mountain bike or gravel bike on dirt roads and trails while my road bike sits dusty in the garage.

Last week, it was time to break that “cycle.” Each week, Marianne Borowski hosts two rides for the Mount Washington Valley Bicycling Club — a Tuesday dirt and pavement ride and a Thursday road ride. When I saw her post for July 15, it was a ride to the Basin. I altered my weekly routine and ride. I completed my column the night before. My plan was to make that ride!

The road bike moved out of the garage and into the sunlight. I dusted it off, pumped up the tires and greased the chain. Everything looked to be “ride ready.” I forgot how light it was as I lifted it up on my bike rack. It was going to be a pleasure riding this bicycle again!

After witnessing crazy driver behavior lately in the valley, I’ve been avoiding road riding. I’m no longer comfortable on roads with lots of traffic. Instead, I’ve been staying on low-traffic dirt roads and trails where I feel safer.

Marianne’s Basin ride appealed to me. I’ve always enjoyed this scenic ride out to the Basin in Evan’s Notch from the North Fryeburg Fire Station. The roads are good, midweek traffic light and you pass the Stowe Store on the way out and back. Thursday’s ride wasn’t too long — almost 30 miles — and not too hard, with a few hills here and there. Marianne rated it B/2/29- B equals moderate pace at 11-13 mph, social, regroups, no drops; 2 equals flat/easy climbs; and 29 is total miles. It was just the ride for a rusty road rider and a hot day!

In 2008 and 2009, Fryeburg, Maine, was the Maine Bike Rally host town. The Bike Coalition of Maine coordinated this event with the help of local bike clubs. For the Fryeburg Rally, this weekend event included road and mountain bike rides on Friday, Saturday and Sunday. There was also a Sunday time trial. With free camping on Fryeburg Academy’s fields, good food and interesting entertainment and events, it was a great cycling event.

My husband, Peter Minnich, coordinated mountain bike rides. Connie Kinsman and I coordinated road rides. In the months of planning before the Rally, we solicited ride options from everyone we knew in the local cycling community. Ideas came pouring in. I still have my 2008 binder with maps of over 25 road rides ranging from rides under 20 miles to century-plus rides.

If you want to check out these rides, go to this site: tinyurl.com/8vws6mw. The rides are still there and have interesting names like “Corn Shop Hop,” “Farm and Garden” “and “Scandinavian." One of those rides was “Basin Bound” — 40 miles from the Academy to the Basin and back.

What I learned then and that’s still true today, is road riding across the border is a different experience than valley riding. The traffic is less, there are some flatter routes through farm country and the roads are more cyclist-friendly especially midweek. It’s relaxing riding with time to enjoy the views. It’s no surprise that many of the MWVBC’s rides start from the Fryeburg Visitor’s Center or North Fryeburg’s Saco Valley Fire Station.

It’s at least a 20-mile drive from Conway to the fire station, but the ride was worth it. As I pulled into the parking lot of the Saco Valley Fire Station on Route 113, I saw many other cyclists gathering. There were at least 16 of us. Some were old friends and some were newer members. Marianne went over the route with us. News of the road paving ahead altered our route. A Maine DOT driver even stopped by to warn us of soft pavement ahead. Now, that’s friendly!

Union Hill Road’s surface was bumpy, with potholes and broken pavement. The riding got better. Where pavement had been removed and it was a dirt road, we found it much smoother. At Meadow Road, we turned left to ride a short distance to the junction with Route 113. Bearing right there, we arrived shortly at the Stowe Store.

Visions of pastries, pizza and ice cream disappeared when we pulled into the parking lot to regroup and saw the “Closed” sign. No treats for me!

Several DOT dump trucks passed by. Continuing north on Route 113 would put us in the middle of the paving. Marianne suggested we bypass it by riding out Route 133B toward Chatham. She warned us of the rough pavement at the beginning but said after the rough stretch, it was better.

It was rough and I had to use evasive moves to avoid the holes. At Chatham, where the road takes a sharp right turn, riding was smoother. The road was quiet and the views of distant hills relaxing.

At Route 113 junction, we turned left for the last stretch up to the Basin. Roller coaster hills made for fun riding. Passing a parking lot on the right near AMC’s Cold River Camp, we spotted hikers heading for Baldface Circle Trail or, maybe, Emerald Pool. Finally, we arrived at the Basin sign and the Cold River Camping Area. We stopped there to fill our water bottles and have some snacks in the quiet, shady campground.

Options were discussed. Who wanted to ride up to Basin Pond? Did anyone want to climb to the top of Evan’s Notch? Nobody felt like riding up the Basin Road to the pond. It turns to rocky gravel and isn’t much fun to ride up or down on skinny tires. Since it was a hot, humid day, the second option was dismissed as well.

On the way back, riders retraced their route to the Stowe Store. Now, it was open, but we continued riding. Some took the shorter way back on Route 113, others went back on Meadow, Union Hill and Harbor Road to the fire station. As we passed by the Saco’s “Old Course,” I spotted the turtles sunning on the rocks. Fields of corn and potatoes lined the road- a scenic ride indeed!

Total mileage for the route I took was almost 32 miles. It had been a good road ride to whet my appetite for more cross or on-the-border riding. Check out the Maine Bike Rally rides to see what the possibilities are-there are dozens!

For a map of the Basin Ride we did, go to MWVBC website’s Route Library. It’s under: tinyurl.com/42r322kb.

Summer Race Series-July 24, Abenaki ski area in Wolfeboro to benefit the Friends of Abenaki organization. For details, go to tinyurl.com/3sjhnvmx

White Mountain NEMBA women’s rides — Every Monday. Contact Maryanne Dunfey for ride location and time at mdunfey@nemba.org or visit the website at tinyurl.com/4nhm4xsk.