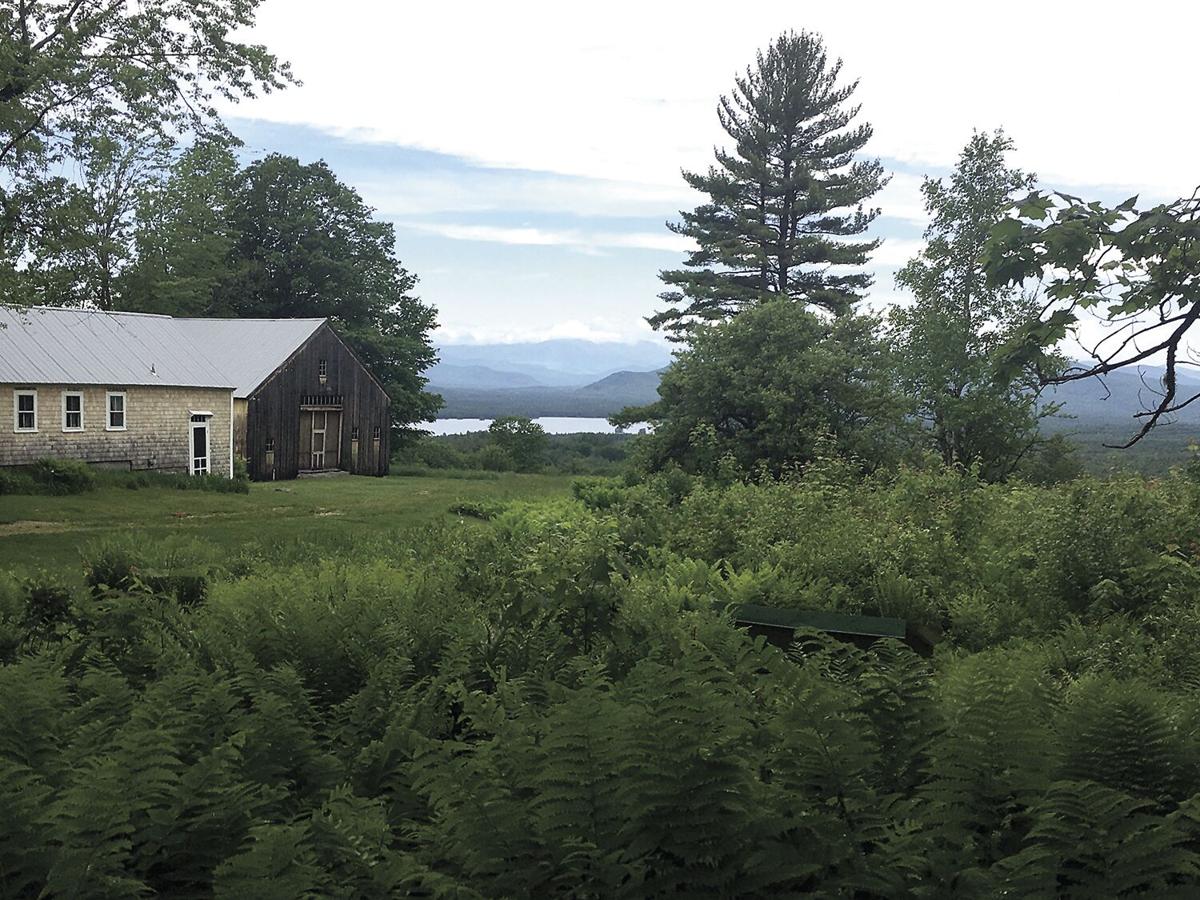 After cranking up steep Leavitt Road, riders are rewarded with this view of Conway Lake and the mountains beyond. (SALLY MCMURDO PHOTO) 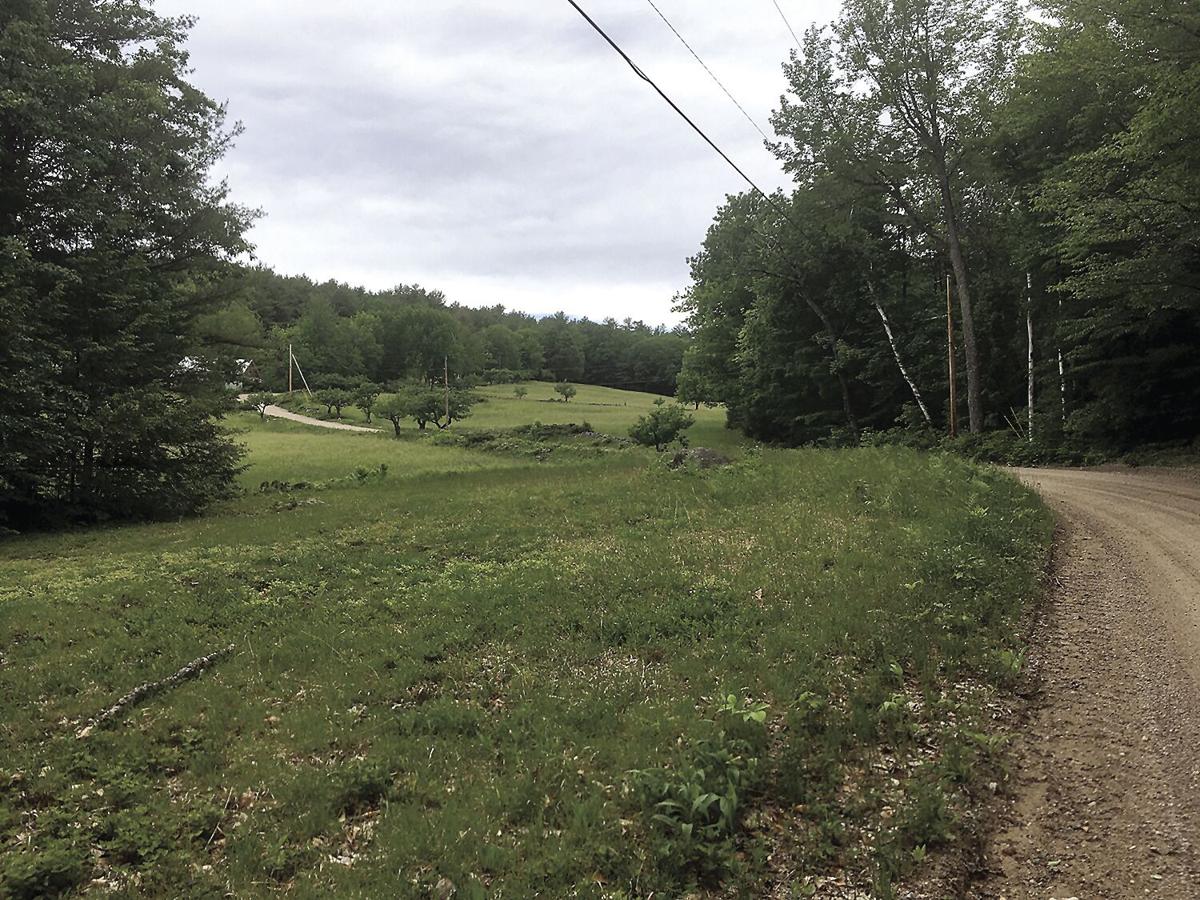 At the beginning of Birch Hill, the road opens to views of green fields and apple trees. (SALLY MCMURDO PHOTO) 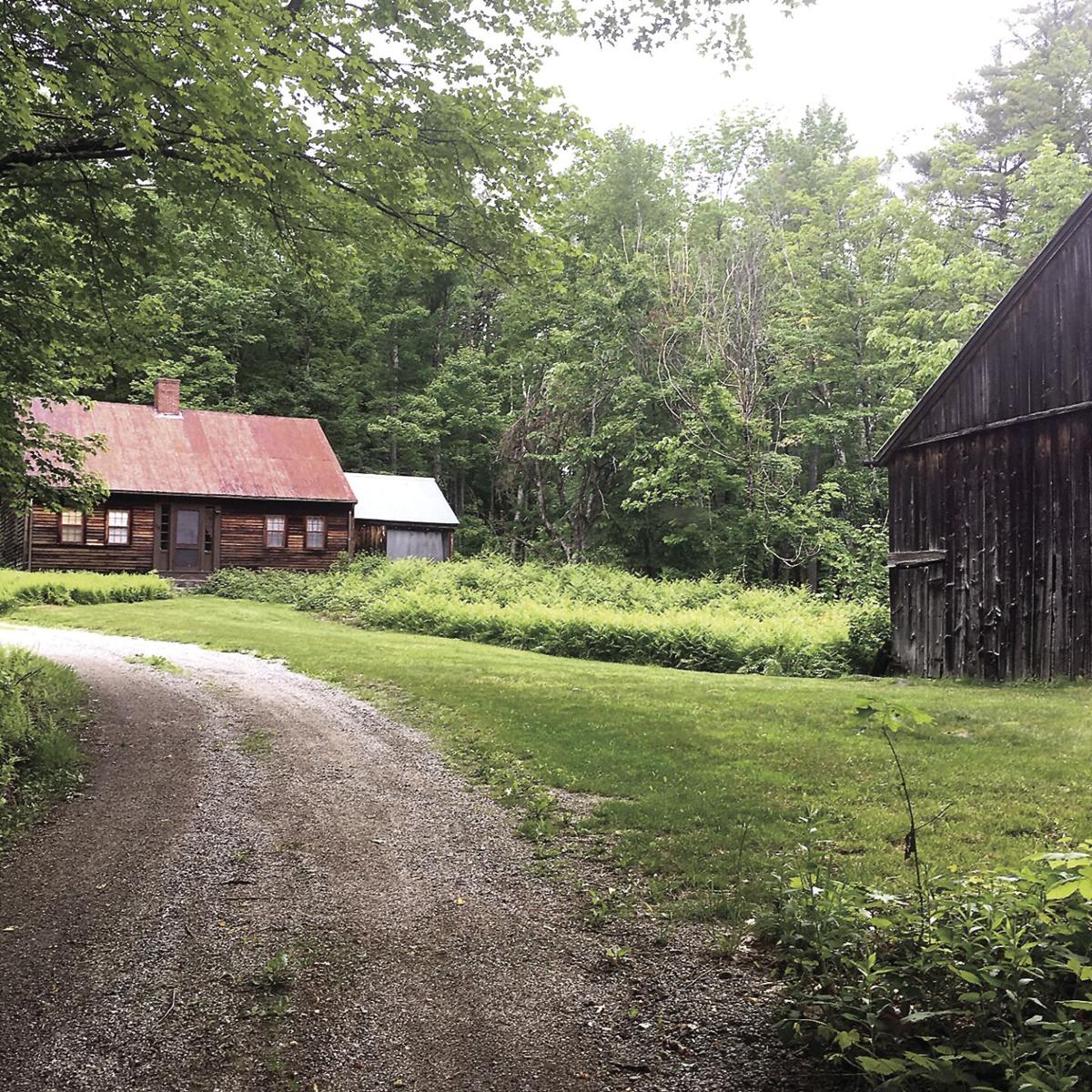 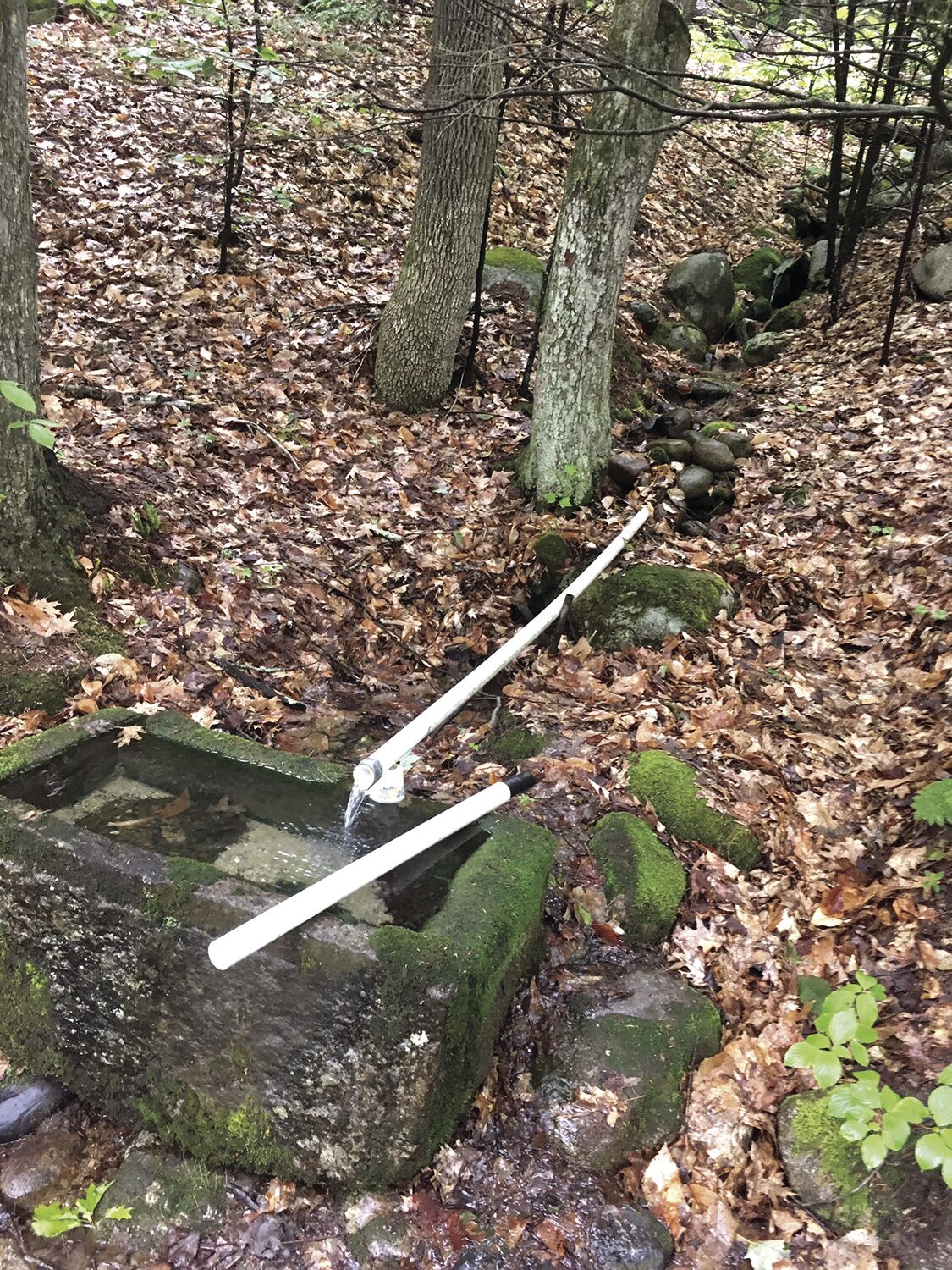 On Gulf Road, a stone watering trough made by Phendeus Potter was placed here in 1866 to give refreshment to horses and people climbing the long hill. It is the oldest surviving wayside watering source in Conway. (SALLY MCMURDO PHOTO) 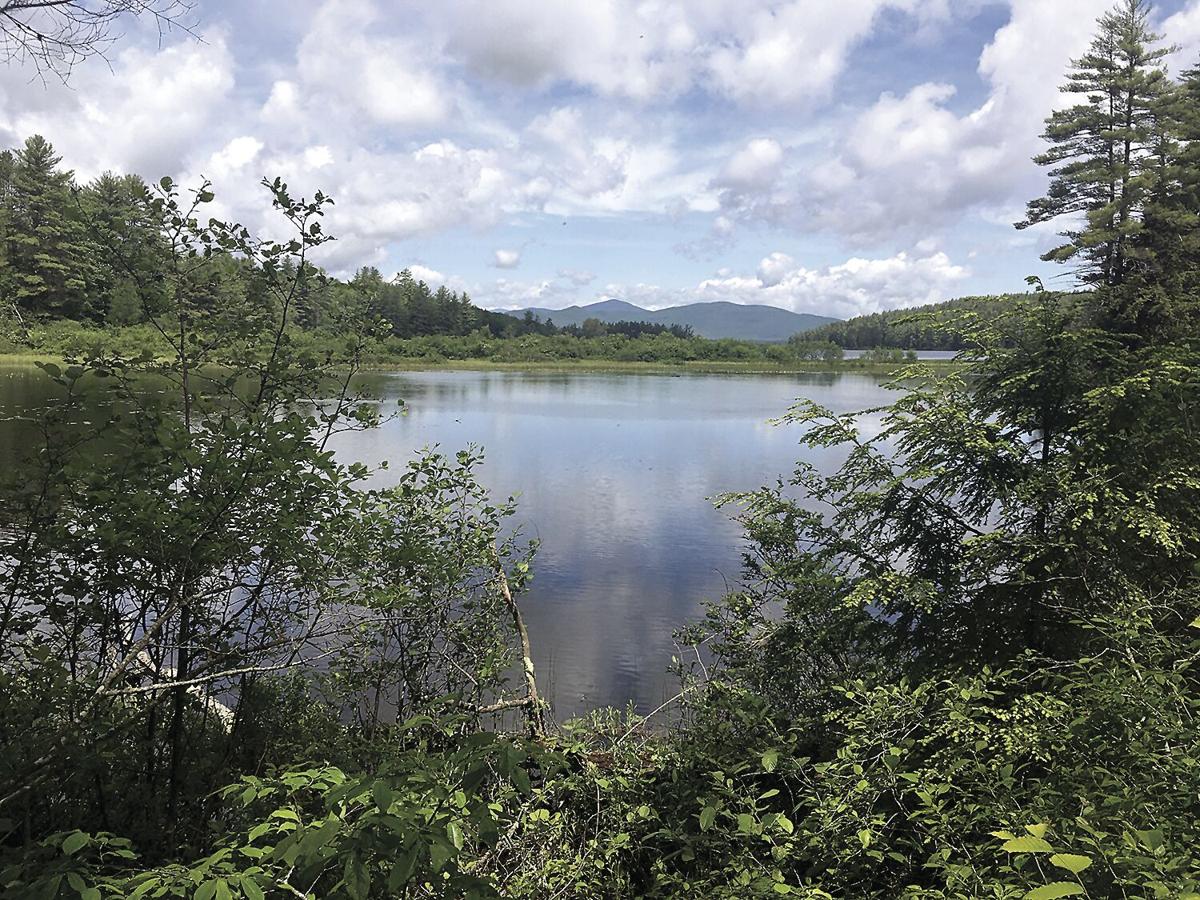 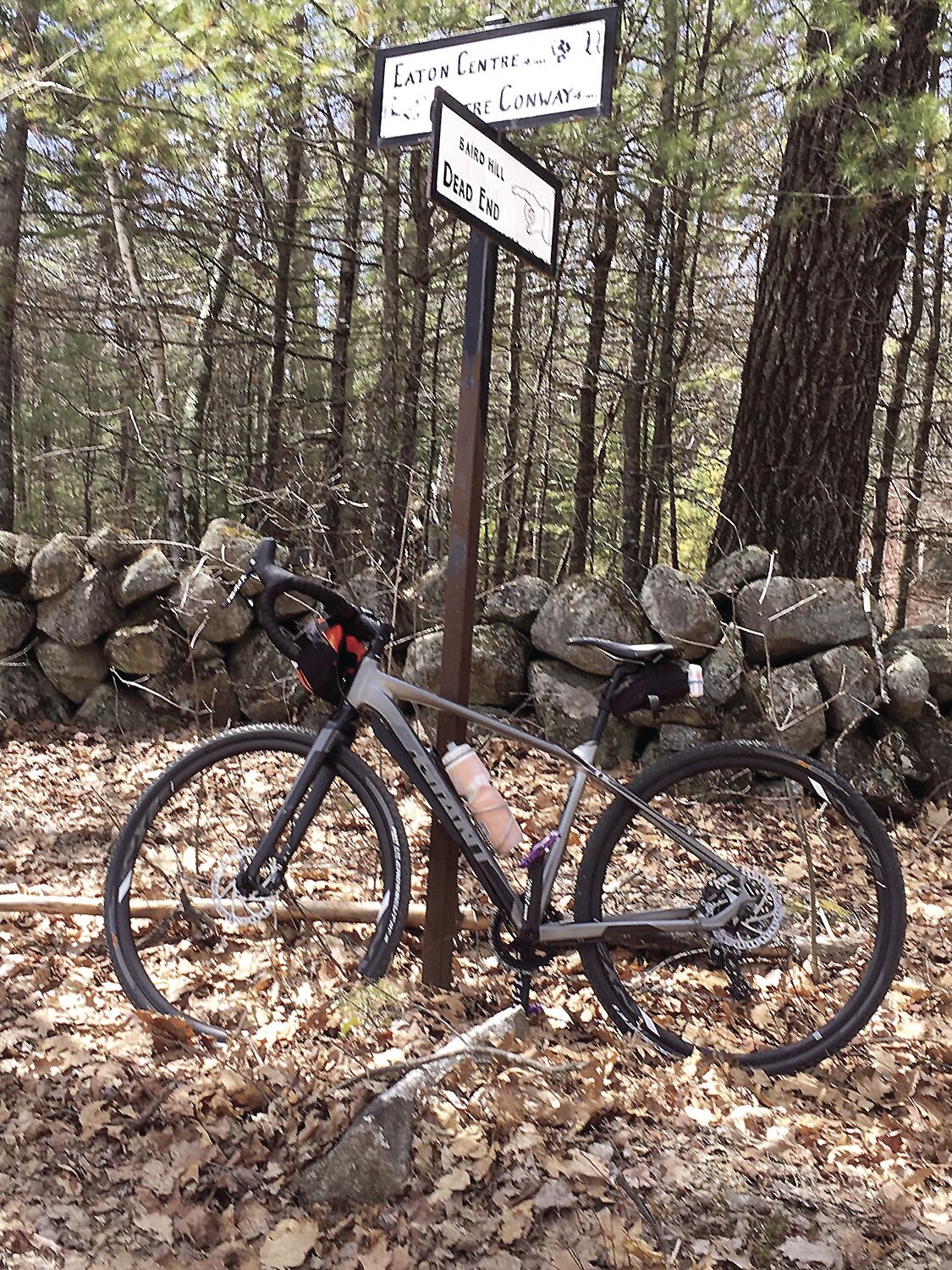 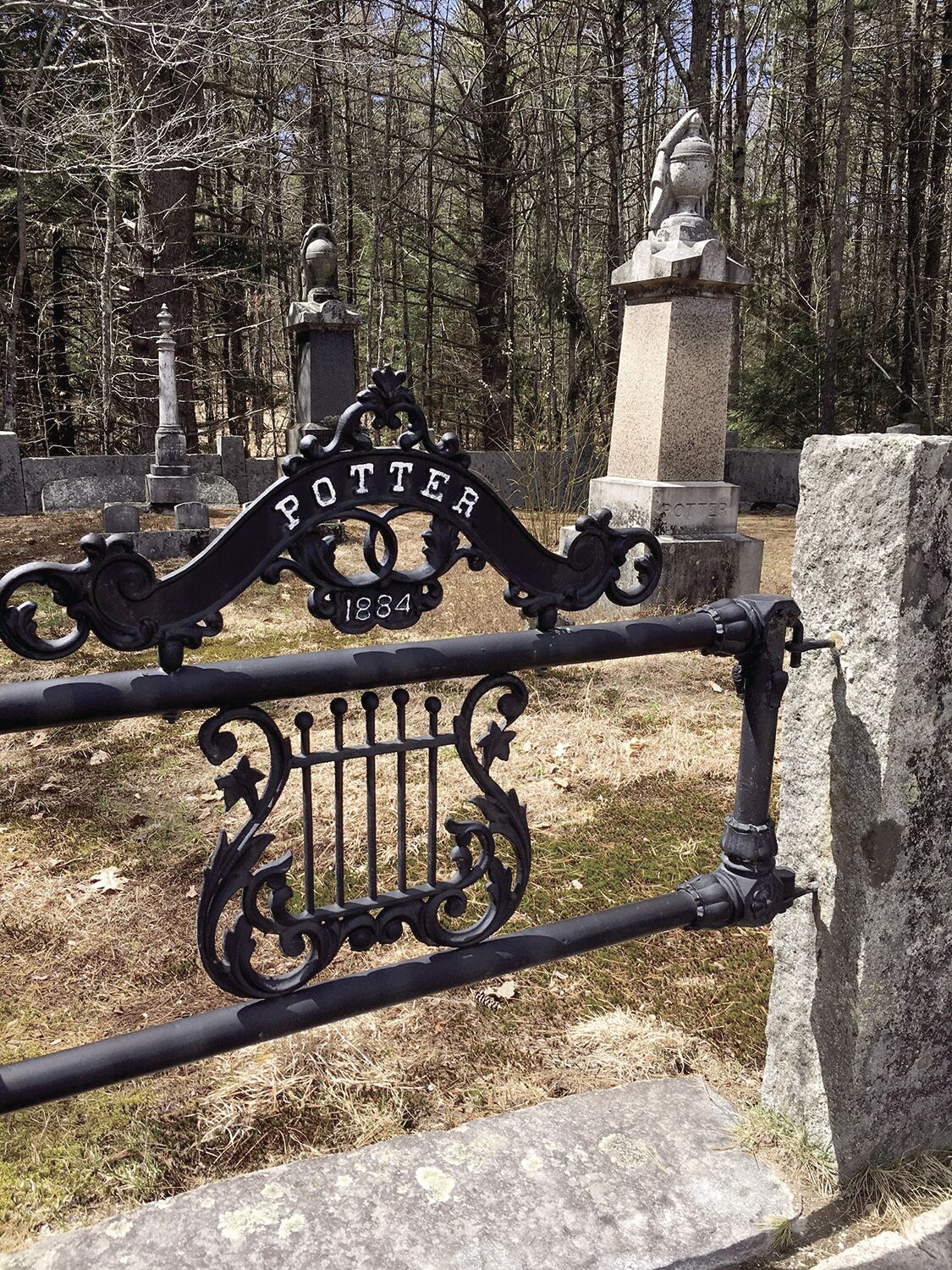 The Potter family cemetery sits high on the bank overlooking the road that bears their family name. (SALLY MCMURDO PHOTO)

After cranking up steep Leavitt Road, riders are rewarded with this view of Conway Lake and the mountains beyond. (SALLY MCMURDO PHOTO)

At the beginning of Birch Hill, the road opens to views of green fields and apple trees. (SALLY MCMURDO PHOTO)

On Gulf Road, a stone watering trough made by Phendeus Potter was placed here in 1866 to give refreshment to horses and people climbing the long hill. It is the oldest surviving wayside watering source in Conway. (SALLY MCMURDO PHOTO)

The Potter family cemetery sits high on the bank overlooking the road that bears their family name. (SALLY MCMURDO PHOTO)

Editor's Note: After deadline, the Sun learned Potter Road will be closed at the Route 153 end at the end of June until sometime in September. They're replacing the bridge at that end so no one will be able to cross. We want to let riders know they'll have to bypass that end.

When the weather got warmer and then downright hot, I had to figure out a way to get exercise and stay cool. I wanted to ride my bicycle, but wondered where I could go to stay out of the sun. Riding on hot, paved roads didn’t appeal to me. A cool, shady ride was what I had in mind.

The morning started cool but promised to get hot by midday. I drove to Eaton and parked across from Crystal Lake’s beach at the corner of RT 153 and Brownfield Road. By 10 a.m., I was on my bike, ready to ride. I planned to do a combo paved and gravel ride that wasn’t too long, offered lots of shady riding, and interesting views and terrain. The route was what I call the “Potter Road” loop.

I prepared for the ride by bringing lots of water — one cold water bottle and one frozen one. Energy snacks were in my handlebar bag. Lathering up with 100-plus sunscreen, I made sure to cover all exposed skin. Wearing a sleeveless, light-colored jersey, white helmet and my Keen cycling sandals, I aimed to stay cool. At the beginning of the ride, I wore a light windbreaker as it was still cool, knowing I’d ditch that when climbing hills heated me up.

My first hill to climb was up Brownfield Road to its junction with Stewart Road and Snowville Road. When I make it to this spot, I know most of that road’s climbing is over as it levels out. I cruised alongside Snow Brook. The road was shady and there was no traffic — just me!

In less than 3 miles (2.8), I spotted the dirt road and frog rock I was looking for, marking the Birch Hill turn. There began my next climb, as I did my gravel grinding. The shaded road soon opened to reveal rolling green fields and apple trees.

At the junction of Birch Hill and Littlefield Road, I turned left on Birch Hill. Both roads end up in the same place near Greeley Road, but I prefer Birch Hill’s cup handle route. At the turn, I met a woman walking three energetic black and tan terriers. I stopped to talk and pet the little dogs. The woman’s full bug net head covering told me not to tarry too long else the bugs catch up to me.

What I like about this 1.2 mile Birch Hill section are its shade and scenery. I always feel as if I’m pedaling back in time to the simple rural life of long ago. Passing old stone walls lining the road, I came to the Birch Hill Farm. In the pasture behind the main house, I spotted an old family graveyard.

Past the farm, I rode through a wooded section and came to another farm, with a peek-a-boo view of Conway Lake. Continuing past that, at a curve in the road, I saw an old barn and a cottage. There’s a quiet to that place that makes me stop here and wonder who built them and where they are now.

Traveling down the hill, I notice a newer house and another lake and mountain view beyond. At the bottom of the steep hill, I come to the junction with Littlefield Road. Turning left, I soon come to Greeley Road to my left and Leavitt Road straight ahead and steeply uphill. The first section of Leavitt Road is so steep it’s even paved! My gravel grinder definitely went to its lowest gear.

At the top of the hill, the reward is an awesome view. Beyond an old farmhouse, across open fields, you can see the whole of Conway Lake and the mountains beyond. I stopped to take a picture, then pedaled on to the junction with Gulf Road. I’m always curious about how it got that name.

Gulf Road is 2.4 miles long from where I came to it and its junction with Mill Street/Brownfield Road. It’s a roller coaster ride, with fun downhills and quick up hills. As I descended, I passed three riders cranking uphill, but I saw no other vehicles. It was quiet and shady as I cruised past more old farmhouses and cemeteries.

At an old stone watering trough, I stopped. The water was running clear into out of a plastic pipe supported by a coffee cup and connected to the stream above. It was carved by Phendeus Potter and placed there in 1866 so horses and people coming up the big hill could pause and get a drink. According to Janet McAllister Hounsell and Ruth Burnham Davis Horne’s book, “Conway, New Hampshire, 1765-1997,” it is ”the oldest surviving wayside water source in Conway.”

Finally arriving at Brownfield Road/ Goshen Corners, I stopped to assess the situation. There’s a blind curve there where you can’t see cars coming from the right until they’re right on top of you. I opted to go right, ride a ways until the road straightened out and I could get a clearer view of traffic.

When the coast was clear, I crossed the road and turned left toward Center Conway. I rode 2 miles to the junction with Potter Road and turned left there. Potter Road is a quiet, shaded dirt road that skirts around Conway Lake from its northern end to the south end. Along the way, there are pop-out views of the lake and mountains. On a weekday, the traffic is light. I only saw one car that day.

Many old farms and houses line the road. On a bank on the right, Potter Cemetery houses some of the previous residents. Beyond that, at the top of a rise, the hands-on old signs point left to “Baird Hill — dead end” and straight ahead to “Eaton Centre.” The section of road from that signpost to Greeley Road junction is not maintained in winter.

When I reached Greeley Road, I had ridden 2.5 miles on Potter Road. I chose not to turn left on Greeley to crank uphill 1.5 miles to Birch Hill. I left that arduous climb for another day. It was getting hot and I was getting tired. I had 1.6 miles to go to reach Route 153.

I turned right to follow Potter Road to the end of Conway Lake. Pausing there to take in the view and look for birdlife and boaters, I had a snack and drink. At the first bridge, I scanned the water for fish and turtles.

At the end of Potter Road, I stopped at the Route 153 junction. This is another tricky spot where cars coming fast down the road are often hidden from sight.

Making sure it was clear, I turned left and rode .8 miles back to Crystal Lake and my car. My ride had been about 15 miles, over 9 miles on dirt. It took me more than an hour because of all the hill climbing and scenic stops, but it was worth it. I got my exercise in and had a beautiful and interesting ride.

Following my fifth rule,” finish cool,” I walked over to the picnic area at Crystal Lake and waded in up to my knees. That felt great!

Great Glen Trails Summer Mountain Bike Series — Tuesdays, being June 29 through Aug. 3, from 3:30 to 7 p.m. This is a weekly mountain bike series for all abilities and ages. Racers can ride the long, short or mini-courses.

Excellent! the more bicyclists off the road with cars and trucks and riding trails the better. If you have to ride on roads have a 4 " mirror on each handlebar or ride facing oncoming traffic so you won't get killed. Legislation is coming that will require road riders to have 2 4" mirrors. Whoo hoo! Better than getting crushed.