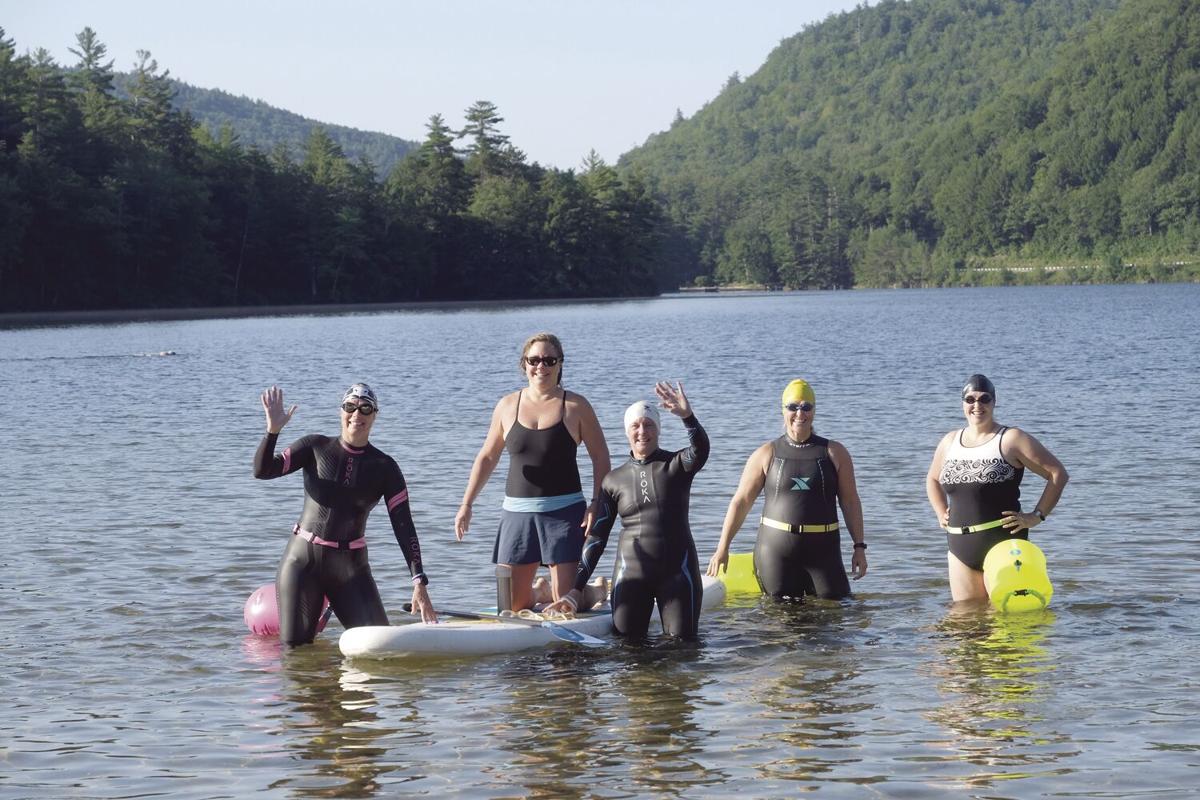 From left:  Margi Wright of Brownfield, Nelle Cooper of North Conway, Barbara Anderson of Fryeburg, Kim Cutler of Freedom and Hannah Sparks of Eaton did a  3-mile swim in Crystal Lake in Eaton on Saturday to remember U.S. Army Master Sergeant Richard Ferguson of Conway who was killed in action in 2004 and to raise funds for Swim With A Mission. (JAMIE GEMMITI PHOTO) 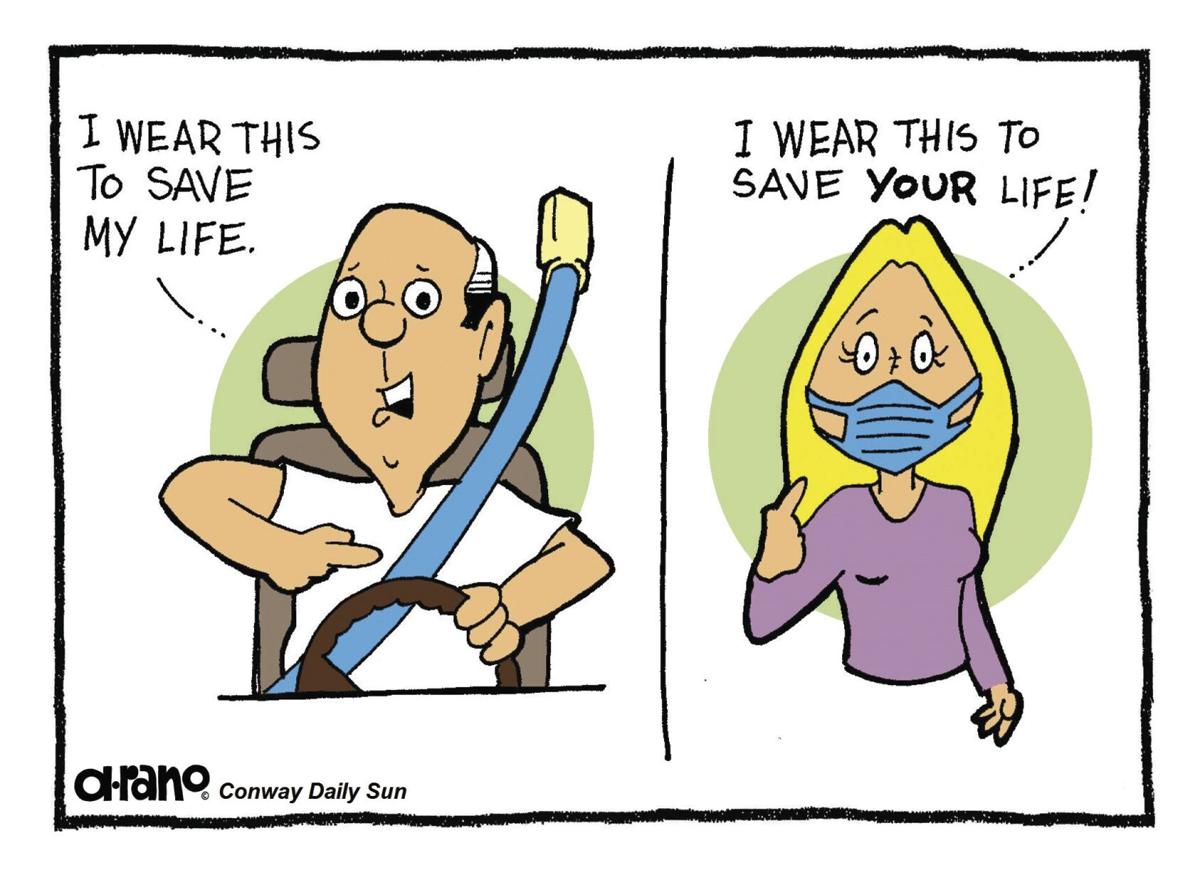 From left:  Margi Wright of Brownfield, Nelle Cooper of North Conway, Barbara Anderson of Fryeburg, Kim Cutler of Freedom and Hannah Sparks of Eaton did a  3-mile swim in Crystal Lake in Eaton on Saturday to remember U.S. Army Master Sergeant Richard Ferguson of Conway who was killed in action in 2004 and to raise funds for Swim With A Mission. (JAMIE GEMMITI PHOTO)

• Outdoor musicians are bringing back a slice of nightlife to the Mount Washington Valley amid the COVID-19 pandemic. The new model of limited outdoor entertainment, with restricted seating, solo or small-group performers and social distancing has been working out well.

• Local musicians say they are grateful for the opportunities to play, limited as they are, given the concerns of social distancing and safety.

• Fryeburg Police Chief Joshua Potvin tendered his resignation on July 17. It will take effect on July 31. This comes after the police union complained about him in March and he was placed on paid administrative leave May 18.

• Voters will be able to vote by mail this fall to avoid coronavirus exposure after Gov. Chris Sununu signed House Bill 1266 into law on July 17.

• The University of New Hampshire announced it is canceling the fall athletics season due to the COVID-19 pandemic.

• The price of new windows to replace the 551 in the 14-year-old Ken-nett High School is going up, and it could approach $1.5 million according to the Conway School Board’s Joe Mosca, who chairs the board’s facilities committee.

• Photographers in the region are taking advantage of the opportunity this month to capture stunning photos of the Comet NEOWISE.

• Alphonse Riang, 28, of Quincy, Mass., is “lucky to be alive” according to state Fish and Game after he left the trail and was caught under fallen snow when the snow arch in Tuckerman Ravine that he was standing under collapsed in the heat of early July 18.

• SAU 9 kicked off the first of 14 listening posts for parents at schools in Conway, Bartlett and Jackson to get input on the possible return to school this fall.

• A group of 10 or so people gathered at Schouler Park in North Conway on Saturday’s sweltering heat in the low 90s to protest for Black Lives Matter. The event was organized by three Maine teenagers.

• Local baseball teams are making the most out of abbreviated seasons due to the coronavirus. Fields at Kennett High reopened on July 16.

• The town of Wolfeboro is asking a federal judge to dismiss a $35 million lawsuit filed against it and the Humane Society of the United States by Christina Fay, who is appealing over a dozen animal cruelty convictions.

• Rick and Tracy Brennan of Boulder, Colo., were forced to land their airplane in Bob and Derek Potter’s hay field in Brownfield on Saturday morning after it ran out of fuel. Fortunately, no one was injured and Brennan was able to fly the plane away the following morning after the Potters hayed it, creating a makeshift runway.

• The sharp corner on Route 153 in Eaton village was changed to a four-way stop intersection on July 7 in an effort to make the stretch of road safer.

• Judge Charles Greenhalgh rebuffed an attempt by Bartlett Police to compel Chris Spinney, 35, of Conway to turn over a video he shot of his own June 6 arrest which involved being Tased and pepper sprayed. Instead, the judge suggested police could file for a search warrant.

• Assistance Canine Training Services has placed a third therapy dog in the Toledo, Ohio, school system. Katie Peters who works at Whitmer High School in Toledo, Ohio, quickly bonded with her facility therapy dog, Ember during a week of training at Telling Tails in Fryeburg, Maine, which wrapped up July 17.

• The town of Madison dedicated its new community solar array in memory of the late educator and conservasionist Ray O’Brien in a ceremony behind the town owned Burke Field on Monday.

• Dorthea M. “Dot” Seybold has been named as the new executive director of the Kendal C. and Anna Ham Foundation. She is scheduled to succeed Robert Murphy, who held that position since 2005, on Aug. 1.

• While New Hampshire officials remain optimistic there will be fall high school sports, the Maine Principals Association announced Tuesday it was pushing the start of fall practices from Aug. 17 to Sept. 8, with games to start no sooner than Sept. 18.

• Conway Lake beach was closed due to high levels of bacteria on Wednesday.

• Town Manager Tom Holmes told selectmen Tuesday that the town is being “overrun” with day-trippers clogging popular recreational outdoor spots, many of whom are acting badly.

• Bike Week in Laconia, which was rescheduled from June to Aug. 22-30, will feature an abbreviated list of events, and masks are being recommended for those attending.

• Carroll County Superior Court Judge Amy Ignatius sentenced Joseph Vincent, 30, formerly of East Conway to four to eight years in prison after he pleaded guilty to providing drugs to his sister who later overdosed and died.

• A site plan review for a project to build a 114-room hotel, restuarant and bank at the former Junge’s Motel on Route 16 in North Conway was scheduled to go before the Conway Planning Board Thursday night.

• Barb Anderson of Fryeburg, Maine, and Margi Wright of Brownfield, Maine, swam 3.1 miles a across Crystal Lake on Eaton on Saturday as part of the fourth annual Swim With A Mission to hoor New Hampshire’s fallen military veterans. The women swam in memory of US Army Master Sgt. Richard L. Ferguson of North Conway, who was killed in the line of duty during Operation Iraqi Freedom in 2004.

• The New Hampshire Department of Transportation is asking selectmen if they want a traffic light or a roundabout at the East Conway Road intersection with Route 302.

• A monument to war dogs was unveiled next to the new main entrance to the newly renovated North Conway Public Library on July 17.

• The state Department of Health and Human Services reported the first death in Carroll County from COVID-19 on Wednesday. No information about the individual was available from the state except that it was a man under the age of 60.

• Carroll County has the lowest percentage of completed Census reports of any county in the state, and now Census workers will be showing up at the transfer station in Conway in a bid to boost compliance.

• Conway Lake Beach was reopened Thursday after being closed Tuesday because of higher than acceptable levels of E. coli bacteria.

• A recount will be held in the July 14 Brownfield selectmen’s race where the margin of victory was one vote. The election results were Richard Norcross 184 and Ricky Emery 183.

• Conway Finance Director Kathy Golding told selectmen Tuesday that revenues are “where we should be” with some revenues coming in stronger than expected amid the COVID-19 pandemic.

• About 100 voters turned out to Cranmore Resort on July 15 when the Kearsarge Lighting Precinct acted on the budget and elected officers at its much-delayed annual meeting.